This review has taken me weeks to post, I got this set at the May MCM convention, that’s over a month ago. Why has it taken so long? Well the last picture in this review came out blurry (all of them I took, around 15) so I had to retake it – yes this took me a month to do. I lost the figures, I couldn’t get to the loft, I had a birthday, I had various small bouts of depression, I’m a lazy fuck, all kinds of shit. Now I have the pictures and with very little other content to post because I’m super busy with other stuff (including replacing all the pictures in over half of the posts on here) so I’m finally posting this bloody thing. SO… I went to MCM’s May convention, in was quite frankly better than it’s been in years, two rooms of dealers, a much bigger list of guests (doubly impressive as another convention was happening the same weekend) and just overall a better experience. Sadly my cosplay fell apart before I got in the damn place but that meant I got to walk around the whole thing in ratty clothes and socks, treating the place like it was happening in my living room, it was very satisfying. I came home with two sacks of stuff, some for my birthday (paid for by others), some for myself to enjoy at the time, such as this: Neca’s Superman vs Muhammad Ali two-pack. 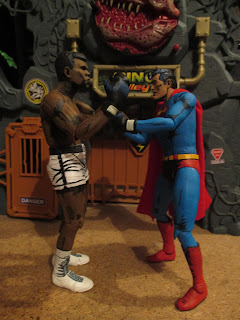 It dawns on me that if you don’t know about this then you’re likely confused as to why anyone would make a two pack of figures featuring a boxer and a superhero. Well once upon a time, roughly 1976, DC Editor Julie Swartz came up with the idea of having the most famous person in the world team up with Superman. Celebrities have crossed over with superheroes more than you might think, even by this point, sometimes because they had their own books (like Bob Hope and Jerry Lee Lewis), sometimes because the celebrity wants it and is big enough to get it (like Eminem) and sometimes just because DC/Marvel thought it would sell or be cool (like this), Kiss and the Saturday Night Live crew have appeared in comics so Muhammad Ali shouldn’t be too ridiculous to comprehend. It took a lot of negotiations and behind the screens fiddling (rumour has it that Ali wrote his own dialogue) but the book finally came out as a huge coffee table sized $2 comic in 1978: All New Collector’s Edition C-56, complete with a tag-line to get some sales off the back of Star Wars (I kid you not: the ridiculously clunky phrase ‘Star Warriors’ is nearly as big as the two leads’ logos). The cover has become somewhat iconic in comic book circles and the book is one of my favourite Superman tales of all time; produced by one of comics’ best duos – Denny O’Neil and Neal Adams – it delivers on its concept and the hype that surrounded it, helped by the fact that Ali is one of the few real-world people who I believe could and would have done something like, oh, say, boxed an alien and won if given the chance. Usually the celebrities in these things feel out of place, or worse the book feels like double-sized issue long blowjob for them (read the Punisher/Eminem special for such things) but Ali was so big and so good and known for being so good that his involvement as Earth’s Champion in an alien pissing contest feels as normal as Superman’s, in 1977 they’re easily the first two people the world would have chosen, with Luke Skywalker being number 3. 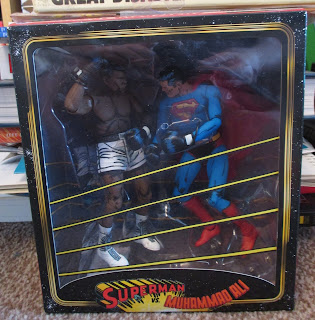 To the figures, Neca has the rights to Ali and are always trying to find dodges to make more DC heroes (they can, basically, get permission to do one off stuff like this without treading on Mattel or DC Direct’s toes so take any chance they can to do one off things) so I can’t believe I didn’t see this coming, but when it was revealed (either this Toy Fair or last NYCC) I was a very excited little bunny. Now I have it it’s…let down by Superman. Ooh before that though, the box: the two figures are packaged to replicate the comics’ cover which is awesome and for a moment made me question unboxing ‘em, so it must be good (it didn’t work, but I’ve kept the box), it also uses text from the opening page on each side of the box for each of the two fighters’ descriptions, pretty classy. So the box is a win on references alone. 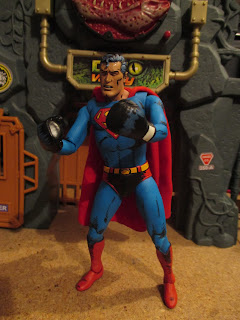 So Superman’s the slight let-down, he’s just too damn thin. Not too thin for Superman overall, he’s been this lithe before, but too thin for Superman as drawn by Neal Adams in All New Collector’s Edition C-56, which this figure is supposed to be re-creating. From face to physique this is the Superman of another artist from another decade and even though I don’t own it for an accurate comparison I’d put down good money that this is built from mostly reused parts from their 6” Christopher Reeves Superman just on my (disturbingly good) knowledge of Reeves’ physique alone - and a Google Image search seems to back me up. It’s a shame because the figure itself is pretty damn cool: after careful consideration and fiddling I’ve decided that he does in fact have an ab crunch but because his torso is covered in an overlay it’s blocked when moving it up and down, other than that he’s constructed lovely; I am now a fan of these elbow and knee ‘cuffs’ that allow for bending with less obvious joints and Superman has them, so that’s a win, the cuffs of his gloves are attached to the hands for a better visual when bent and to allow for hand-swapping, Supes coming with both ungloved fists and flying hands that ARE reused from their Reeves figure, they’re the sets only accessories but allow you to use your Superman for more than boxing and allow Neca to have released another straight Superman figure, the tricky bastards - if you want a decent late Silver Age Superman figure this set has you covered. I’m not a fan of cloth capes but they do have a deliciously retro feel and perfectly suit the timeframe when the special came out (back when Mego made superhero figures so everything was cloth) and the sort of person who would have nostalgia for the special left over from its time of release (who would also have nostalgia for said Mego figures, presumably), so I can see why such a decision would be made. His paint work is perfect, not just perfectly executed (it is, no cock ups anywhere) but perfectly designed, NECA have gotten really good at these ‘in the style of’ paint jobs on their video game series and that experience translates perfectly into making a figure that apes the outlined, shaded art of a comic book in general and Neal Adams in particular, I have no idea why they chose to give him Curt Swan-esque closed eyes though, Neal Adams never drew him with anything but normal eyes. Mine does have slight damage on the back, the soft plastic covering his torso has ‘laddered’ a little by his belt, the cape covers it so it doesn’t upset me, but watch out I guess just in case it is a reoccurring problem and it happens at the front, I won’t be putting mine anywhere near direct sunlight just in case of degrading. 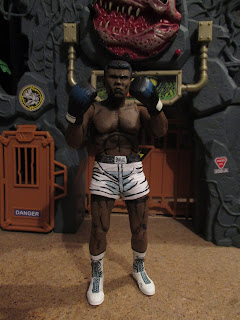 Ali’s the star of the set, though you could argue his arms look a little thin too, they’re closer to Ali’s arm (and ironically, Superman’s arms as drawn by Neal Adams) than Superman’s are to Superman’s. Ali shares Superman’s construction (ball joints at the neck, shoulders, elbows, knees, wrists and abs, double jointed ankles), complete with ‘cuffs’ on the elbow and knee joints but with additional toe-articulation (because if Ali can’t go on tiptoes you have failed as a toy designer) and exchanging blocked ab crunch for blocked crotch joints, his trunks are thick and unpliable and it’s the figure’s only downside, a bit hard to float like a butterfly when your legs are stuck in a ‘standing your ground’ pose. Still as most people won’t be posing his legs any other way maybe it doesn’t matter. I was under the impression that this was just an Ali figure repainted, I was wrong, I’m certain there is a lot of reused parts on him (the muscle definition doesn’t match the ‘shading’ a dead giveaway that NECA has reused on these ‘in the style of’ figures, see their video game figures for this in action) but  if there is (there is) it’s all from the Rocky figures because this is NECA’s first 6” Ali figure and their first articulated Ali figure – holy shit I feel so much better about paying £45 for this set now I know that, suddenly it seems cheap. The reason Ali is the star of the set (got there in the end) is a combination of a fantastic likeness mixed with the same awesome ‘in the style of’ shading paint apps as on Superman that stay the same level of quality (again in both design and execution) while being much higher in quantity (Ali, being dark skinned and mostly nude, received more shading and muscle definition than Superman’s comparatively light suit) add in addition of him being the first from NECA - hopefully they’ll repaint him in a realistic way, if they do will they get another £20 from me – and it just all combines to make a really good toy, and even if I retire Superman from my shelves (which won’t be for a while), Ali will remain.


My gripes about Superman’s weight issues aside this is a good set, do you want to know why I know it’s a good set? These were at my Nan’s house and she moved ‘em from the dining table to the extension for whatever reason and, without me being there, without anyone being there, posed them as if they were boxing – if a regular person, someone who is not a toy collector or toy fan, feels compelled to play with and pose them? They’re a complete success.