I got Clawdeen here a week or two ago and wrote a review during a particularly nasty bout of depression, a review that was too crap and quick even for something called ‘Quick Crappy Reviews’ so I buried it in My Documents in shame, waiting for the time when I could look upon is mangled visage again and improve upon it. Hm, guess that’s today.

Both dolls in the Freak du Chic: Noir were exclusive to Argos* in the UK and Target in the US, Clawdeen was one and her sister’s friend Twyla was the other.  If you’re weird and don’t follow children’s fads, Clawdeen’s an independent werewolf who don’t need no man the black chick with attitude, the daughter of the werewolf, the group’s fashionista (and far, far less annoying than Rarity) and one of the main characters in the series, meaning along with Draculara and Frankie Stein she gets the most dolls per year. Of course most of that isn’t important today because here she’s a lion tamer – and that is awesome! I often consider that Monster High – a line of sexy teenage girls who are the children of monsters and often dressed with an Alternative flair – are made solely to appeal to me, and for my mind Freak du Chic confirms it: the ghouls are dressed up to take roles in a GOTHIC CIRCUS which has rolled into town (and featuring new character and the line’s first 17” doll Gooliope Jellington – daughter of The Blob), I do question some of the pairings of character and role (why is the daughter of the Boogeyman a stilt walker?) making Clawdeen the lion tamer, and executing the way they have, is perfect.

It’s just such a small jump (in my warped mind anyway) from werewolf to lion-tamer; she’s a large carnivore – now she trains large carnivores, there’s logic in making Clawdeen a big cat trainer. Anyway the MH werewolves have always looked as much like cats and wolves (or in the case of Howleen’s first doll, as much like a sheep as a wolf - fitting its own way) which may have been the first indication that Monster High would become obsessed with werecats - because Monster High is fucking obsessed with fucking werecats! Werecats apparently sell well to little girls who may well be the target audience for the line but Catty Noir is still in blackface: 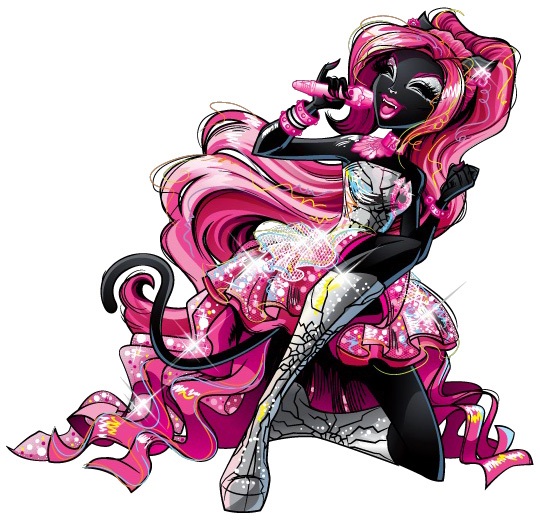 Where was I? Execution of concept! Honestly I was supposed to be talking about that. I would like to know more about the design process of a Monster High wave, for instance I would like to know if a certain person always designs the same character, the reason I would like to know this is because Clawdeen is unique amongst the characters in her franchise in that she always looks good no matter what line she’s in. Now this completely fits with her character but given how they dress up self-conscious nerd Ghoulia Yelps half the time that seems to means precisely dick to the team, but if there isn’t just one extra-talented designer who always works on Clawdeen then the team must be putting extra effort into her designs because the girl looking stunning in every sub-line, even that shitty Skultimate Rollermaze – which I’m still convinced was made just to out rollerblading accessories deemed to ‘cheap and shitty’ for Barbie – it’s really stretching the law of averages.  True to form Clawdeen looks gorgeous, the team really got the design conventions of a creepy Victoriana European circus down for the whole line and while Clawdeen looks a little more modern than some of the others (more early 1900s) she boasts the fur, tight animal print trousers and boots of your archetypical lion tamer while the standard top had has been turned into a nice little fascinator. Obviously she can’t have a Salvadore Dali-esque moustache because crossdressing is way too radical for Mattel - though I have no doubt she’s rock that ‘stache like the stylish bitch she is.

In conclusion she look fucking sexy, my only real complaint is that I’d’ve preferred her to have lost the undershirt and just had a corset, or had a straight-up underbust style corset-shirt, her top smells faintly of copping out – I of course understand this was probably deemed too racy but then this is the line that routinely presents teenage girls in theirs swimsuits and in the bath. My favourite part is the combining of the fur and hair to give her a mane, actually the use of colour on the doll’s lovely – the different between the Noir dolls and the regular Freak du Chic assortment is that these are drained of most of their saturation, and I full applaud them going the whole wolf and greying Clawdeen’s fur/skin (I think she shaves), it’s easily explained away as her wearing make-up but it makes her look extra dead and thus fitting the gothic circus theme that little bit better.

Having just written one of these for Masters of the Universe Classics figures I’ve come to realise that Monster High dolls are loaded down with accessories – as well as the standard Monster High stand and brush (still the coolest brush in a doll line ever) she comes with a flaming hoop, a pet and a postcard like poster of her as a Lion Tamer – and I’m still going to complain about her not having an accessory. See all the artwork for her, and that aforementioned poster, have her using a whip but… she doesn’t come with one; it’s just odd and makes me think that the whip was cut for some reason, either for budget or ‘good taste’ (too kinky, to animal cruelty, etc etc) and they didn’t want to pay for a new set of drawings. The flaming hoop’s nice, it’s transparent and by being pale purple it doesn’t ruin the overall ‘Noir’ aesthetic but its best feature is she can actually hold it (seriously Mattel – what is the fucking point of giving the ghouls anything they can hold? They have open hands, they can’t hold anything!), it has a little handle, you have to squish the fingers together to get it in there, the hands are soft enough but it’s still a worry and makes no sense from a design point of view, didn’t you put the hand next to the handle when sculpting it? Crescent meanwhile is beyond criticism, oh yeah Crescent’s the pet, it’s a cat, but they’ve given him a little fake mane and coloured it the same as his owner – it is exactly what I would have done and thus it is ‘correct’ ‘logical’ and all those other words that are used as fact when they’re actually opinions. It’s also so bloody adorable, look at him:

I’m delighted that I like both Freak du Chic Clawdeen and Frankie as much as I do, they’re the first time I’ve broken my rule of only buying each character in their default outfit, I knew it would happen eventually and I think I did very well to resist the Power Ghouls and Freaky Fusions but GOTHIC CIRCUS was just too much for me and if I’d’ve opened ‘em up and just thought they was ‘alright-ish’ I’d’ve felt substantial guilt.

* for the American imaginary readers, Argos is a catalogue shop, similar to how your Sears has been
Posted by dwitefry at 02:58