So Kinder Eggs and Wham have Teenage Mutant Ninja Turtles tie-in sweeties for less than £1.50 apiece, that’s a good reason to write over 1,500 words, right? 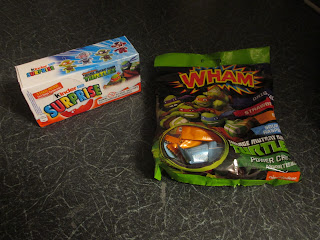 The truth is though I’m pretty excited by these, Kinder Eggs and Wham! Bars aren’t exactly Cadbury’s Dairy Milk or Mars Bars but they’re pretty big names in the sweets world here in the UK and the fact that they’ve deemed the Turtles big enough again to be worthy of a product tie-in  says a lot for the Nicktoon and the current TMNT era we’re in. I suppose both of them were around for the first Turtlemania back when and for its first resurgence in the early 2000s so they would have seen how big the Turtles could be/have been so could easily view the TMNT as a safer bet than other franchises but it’s still fucking awesome when your favourite thing is considered big enough to be on a Kinder Egg. 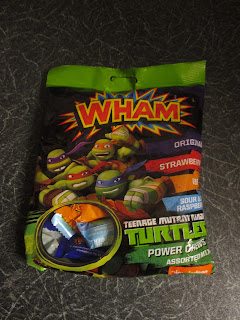 My lovely friend bought me these, just because they Turtles were on them without really knowing if I liked them or not – I like her style - but I actually have a bit of a secret affection for Wham Bars, they’re really the only chewy sweet I will spend time with – though I don’t chew them but rather suck them ‘till I bore and then throw them away, which is pretty gross I agree but not as gross as people who lick the cream out of Custard Creams/Oreos and then just leave the biscuit behind somewhere, that shit’s rank. Wham Bars have been around since the early 1980s and this is just their usual fun size assortment with new wrappers, but the wrappers are Turtles and that instantly makes them better.
Actually they’ve been pretty classy with their TMNT wrappers, assigning each Turtle to a flavour via matching their headband to an already established colour – Leo is Sour Blue Raspberry (light blue), Mikey is Brew (orange), Raph is Strawberry (Red) and Donatello is Original (dark… blue…yeah…well they don’t have a purple one and it’s closer than any other option, alright?). Of course my packet did not contain a single Strawberry chew because the universe knows full well that Raphael is my favourite turtle and this week has REALLY proved that the universe hates me (I’m not going into it, take my word for it and that it relates to more than just chewy sweets). Mind you the Strawberry Wham! Bars aren’t that great, but I would have liked a picture of the wrapper dammit! 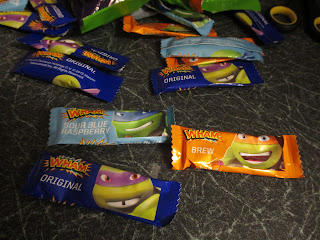 I’m trying to think of the best way to describe a Wham taste (Original, or Donatello in this case), I’m sucking one now  and the best I can come up with is ‘undiluted squash/punch’ the ‘mixed fruit’ kind that’s just the manufacturer’s way of saying ‘we couldn’t pin down the taste of this shit to one particular thing’. Michelangelo’s Brew bar is supposed to approximate Iron-Bru without paying for a licence which is a pain because no-one’s really sure what that tastes of either (girders, apparently) but that’s ok because the Brew Wham actually tastes more Lucozade anyway and that just tastes like orange cough mixture. I’ve never had Sour Blue Raspberry Wham before but it really just tastes like a slightly sourer version of the regular Wham bar, they’re quite nice as they have less of the sweet aftertaste.
I couldn’t try the Strawberry bar now could I, universe? You prick. But I’ve had them before and they’re a bit sweet, a little less tangy and a little blander, personally I think that Raph’s perfect sweet would be chilli chocolate but Wham don’t have a bar for that. 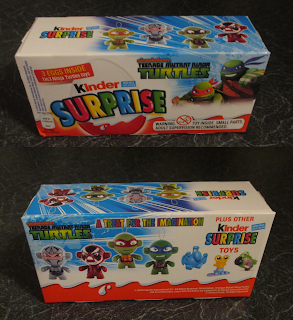 My mum brought me some of these back from her holiday about two weeks or so ago but I was really ill at the time and couldn’t’ve stayed out of bed long enough to use the lavatory, let alone something as non-essential as writing a blog post on sweets with 30-odd year old comic characters on their wrappers, that and I ate them in a manner I would liken to a black hole in the top corner pocket of a billiard’s table (when I have a cold or flu I live on chocolate and pizza). But I was mega excited, I haven’t written about Kinder Eggs yet but I AM INSANE FOR KINDER EGGS, they’re my favourite chocolate, wanna know how much I like these things? Here is the Kinder Egg store display that lives in my bedroom: 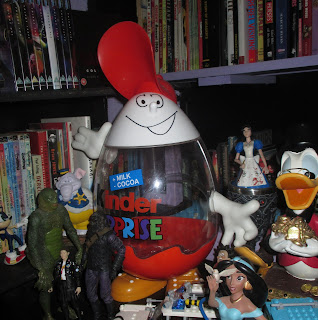 And you can see my amazingly eclectic selection of books, who doesn't need Goosebumps, Only Fools and Horses, Private Eye and the Super Dictionary to hand at all times? Every day when I was in Infants & Junior School my mum would bring me a Kinder Egg when she picked me up at lunchtimes (I went home for lunch, I was a lonely child) and it was the highlight of my school day, one of the many things I hated about senior school was that it kept me from my Kinder Egg a day. So Kinder Eggs and TMNT combined is seemingly something just for me, and on paper should be amazing but in practice isn’t so much. Firstly the tie-in’s emblematic of something that’s been kind of irritating me of late; Kinder have done some licence tie-ins before but they were usually just evergreen things like The Smurfs, Looney Tunes and Disney and it really wasn’t that dominant on their products or advertising, the odd animated TV spot aside, the real licence driven chocolate eggs were some me-too wank like Super Eggs or Novelty Eggs or some shit but recently Kinder have really started focussing on the licences, Frozen, Star Wars, TMNT, anything that’s currently ‘in’ and they’re plastering it all over everything – store displays, wrappers, boxes, adverts – it’s irked me, it’s like they’ve become a little lower class by doing so. 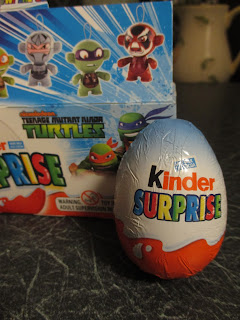 Anyway for your viewing pleasure today we have a three-egg box of Kinder Surprise, if you’ve forgotten what Kinder Surprise are they’re hollow chocolate eggs about the size of a chicken’s, one side is milk chocolate and one side is white chocolate, I only bring this up because I know they’re not on sale in America and haven’t been for some time. Inside are just three regular eggs, no TMNT stock artwork on the wrapper or anything just the standard ‘boy’s egg’ blue design – which is another recent change that’s pissed me off about Kinder Eggs, splitting them into boys and girls eggs, as a child who grew up loving things like Care Bears but with a grandfather who fully subscribed to the ‘don’t give him girls toys he’ll turn out queer’ school of thought I hate the boys girls/girls toys shtick and now as the stigma is becoming ever smaller, Kinder Eggs – something that never previously went in for this shit – is now making chocolate sex-specific? Surely if anything should be unisex it’s chocolate (that includes Yorkie) and Kinder Eggs always were - and I’m sure it’s all connected to the licence focus they now have “well we want Disney Princesses but boys won’t want them” etc. Anyway anyway the eggs inside are also standard, not green like I’d hoped when I first saw them – just not putting the effort in Ferrero. Some people don’t like Kinder chocolate, they claim it to be ‘waxy’, I claim them to be wrong; I’ve eaten thousands and am Christ so take my word for it: there’s breezy, airy quality to eating them, the equivalent of breathing in fresh morning air or grass just after it rains and the mix of two chocolates makes it some of the most flavoursome choccy around. Of course the chocolate didn’t need to be green at all but come on, you’re gonna tell me you wouldn’t enjoy getting a little plastic mutant turtle from an edible, chocolate mutant turtle egg? 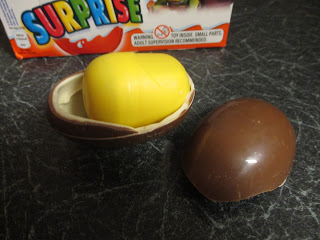 What you do get though is a guarantee that 1 of the 3 eggs will contain a TMNT toy and…well what a toy:
Actually I don’t think it IS a toy, I think it’s a phone charm and I’m pretty sure that I’ve seen it in vending machines by public toilets. Frankly the whole ‘mobile phone culture’ and especially the peddling of this to children bugs me enormously but not as much as the fact that whoever made these didn’t make a new head sculpt without ears for the Turtles. The difference is that I find these eared turtles wonderfully charming in a bootleg action figure way and I don’t find anything charming about mobile phone culture and pushing another kind of fashion onto children. These are just the most adorably bizarre little things and Donny here is rightly terrified at what he is. I miss the hand painted hard plastic special prizes so much BUT I will say that it’s made me keen to open the plastic capsule and see what the prize inside is since…I dunno, the ghosts, when was that, 1995? As I have no use for phone charms I’m going to cut the string off of these and just have them sitting around pretending to be mini-figures until I have a clear up then they’ll go into the all-other-TMNT-toys-boxes I have until I have such space to set them all up in some kind of horrible clutter-shrine to Eastman and Laird. 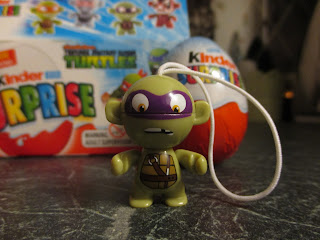 In conclusion – Kinder Eggs are tasty and their ‘toys’ are deliriously weird, Wham bars are funny tasting and they work to deny us Raphael. Thanks for killing time with sweets I ate this week!
Posted by dwitefry at 11:32