A Tribute To... Goosebumps Monster Bags*

Goosebumps Monster Bags baby! A real favourite of mine from 1996 and (I believe) Hasbro, everything about these were great. They worked the exact same way as Galoob’s 1991 flash of brilliance Trash Bag Bunch, I was originally going to make a snarky comment about this not being too surprising because Hasbro own Galoob but it turns out they didn’t buy that company until 1998 so instead of recycling an idea, they just nicked it instead. If you don’t recall Trash Bag Bunch, or are just too young or too sexy to know/care about them they were the best way of handling the blind bag concept possible – the figures came in rubbish bags full of slime that dissolved in water. Monster Bags are just that but even better – because they’re action figures, and Goosebumps. 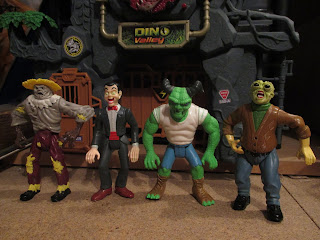 I was all in on the Goosebumps fad in the mid-90s, if any imaginary readers remember my Two TMNTSweeties post you’ll 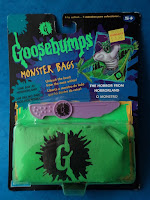 know that I still own a stack of the books and am so shameless about my past with them that I proudly have them on my bookshelves as an adult, but I had Goosebumps everything – stationary, pyjamas, clothes, posters, board games, I had Goosebumps slippers and I didn’t wear slippers (putting Goosebumps in the elite Pointless Slippers Club with only Teenage Mutant Ninja Turtles and Sonic the Hedgehog for company) – so any Goosebumps action figures, my preferred medium of toys as you may have guessed, was the height of awesome; but ones that came in dissolvable bags of goo? What’s higher than the height of awesome? The Rock of Eternity? Whatever it is, Monster Bags were there for 9 year old me. My mum not so much, she never liked any of these dissolvable things and as I found out in the toy isle of Tesco the other day, she’s still not keen.

The figures weren’t blind bagged, but rather each soft fabric bag (the best way to describe a Monster Bag is, you know when paper gets really used and becomes almost like cloth? They feel like that) came on a somewhat superfluous blister card clearly detailing which one of the four characters came inside along with instructions on the back, each card also included a small plastic knife to rip

open the bags with once you’d soaked it. The bright green bags (most Goosebumps things were either purple or hot green, if you recall) contained equally neon slime with a slightly crystalline/gritty feel to them that had to be submerged in warm water. Whatever this shit was it was clearly supplied by a Sly Sludge, I think you can see it in my pictures but just in case – my Slappy and Mr Mortman STILL have green stains in their nooks and crannies after 20 fucking years. I think the intention was that you ‘cut’ (read: ripped) the bags open on a nearby flat surface but my nan would never have gone for that, this is the woman who put a sheet down on the garden patio when I used Real Ghostbusters Ecto-Plasm, so I opened mine in the water and thus can tell you exactly what that sludge felt like because too this day I can feel it every time I wash up or am forced to drink a J2O– gritty thick water, like everything liquid or semi-liquid from Dr Dreadful but grittier. What you were left with was not a figure, but parts to be assembled, yes – just to make these things even cooler, you could swap all their parts though personally I never did this (I didn’t do it with He-Man either, hell I didn’t do it with Socket Poppers and that was the whole point of them, I just like my figures to look accurate, I was such an anal child). Once you’d done all this you were left with one of four figures from the Goosebumps novels. I’m sure at least one imaginary reader is thinking ‘what an unnecessary load of extra crap to do to get a figure’ but I couldn’t disagree more, the extra effort made me appreciate them more and they remain so memorable because of their gross method of unpacking - and bags of slime improve any toy for kids. 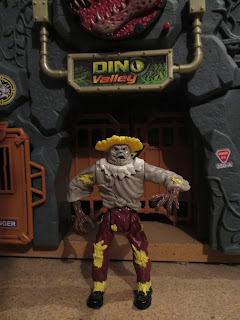 The Scarecrow
From The Scarecrow Walks at Midnight
I’m still debating if the scarecrow was a sensible choice for the line or not, I’m going to go on nothing but baseless assumption and figure it had something to do with the success of Batman for Kenner (which WAS owned by Hasbro in ‘96) but regardless this figure is why you’re getting this article. See I lost my original Scarecrow in the Crush Dummies Box Mix-Up Disaster and only replaced it last week, it arrived in the post just before I started writing this. This is also a good time to point out that the Monster Bags also included roughly three accessories for each figure but my pictures do not, I honestly don’t know which ones I still have but I hope some of them are the Scarecrow’s – he came with a burning torch, a book and an ear of corn, I just love the idea of having him on display waving his ear of corn at whoever comes into my toy room. The figure itself is a little odd, I mean it’s a fine evil scarecrow (though it looks a little like Clayface in drag) but it’s really flat, feeling almost like a shaped block of chocolate. 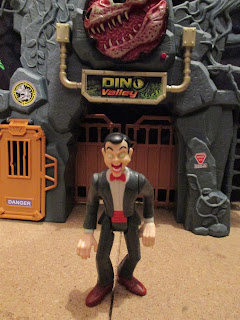 Slappy
From Night of the Living Dummy
So I bumped into a friend of mine while waiting for a bus and we discussed the new Goosebumps film, the one with Jack Black, her views can be summed up as “it was alright but FUCK SLAPPY”, proving that even after all these years that fucking ventriloquist’s dummy it still the scariest thing in the franchise. Thus Slappy was a must for a Goosebumps action figure line, scale issues aside – though I never really thought of Slappy as being ‘doll sized’, the same way I never really thought of Cuddles as being ‘huge grotesque slime filled hamster’ size, I honestly think growing up with toys that considered scale to be something you sculpted onto lizardmen (if you didn’t want to reuse their parts) warped my ability to comprehend size as a child – what was I saying? Slappy, essential for a line, and done brilliantly here; an eerie mix of Pee Wee Herman and Harry Houdini, it’s clearly a skill to sculpt something that intentionally belongs in the uncanny valley and the sculptor of Slappy clearly had that skill, though I think I’d’ve preferred him to have had a more ‘wooden’ skintone, this one looks like the undead corpse of the man Slappy was based on – which is pretty creepy by itself really. Slappy’s accessories were fairly weak; he came with some spilt milk and stuffed toys. 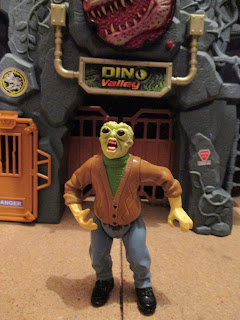 Mr Mortman
From The Girl Who Cried Monster
Hypothetical situation: “right, candidates for Goosebumps action figures – we got a mummy, a skeleton with a mowhawk, a big-ass executioner, a werewolf, an evil superhero, a mudman, a huge grotesque slime filled hamster…” “Might I interrupt you with my suggestion sir?” “Certainly Clive Clothead, what character do you think children would want more than these?” “A fat bloke in a cardigan sir” “Brilliant! You truly know your audience Clive!”. I’m not doing this figure down as a figure, because it’s terrifying in all the right ways and has a superb headsculpt but that’s me looking at it as an adult action figure enthusiast, as a child my view was (I would presume) the same as most kids would be: a puzzled semi-sneer. I cannot think of any reason to release Mr Mortman over the likes of The Haunted Mask, Prince Khor-Ru, The Mud Monster or Curly – who was the mascot of the franchise – who would have cost the same as Mortman (each figure is an entirely unique tool, toy companies used to do mad shit like that once) and were all used in merchandise far more than Mortman (that is, at all). Mortman I guess made up for things by having three bugs the size of his head as his accessories, those I know I’ve lost, that makes me a little sad but it does give me a reason to dissolve a Monster Bag again. 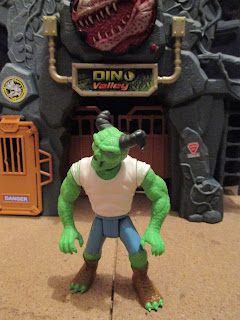 The Horrorland Horror
From One Day At Horrorland
One day I’m going to create a top 100 action figures and it will include many toys that feature on no-one else’s top 100 figures list and this will be one of them. One Day at Horrorland is my favourite Goosebumps book, one of my favourite stories in all of the horror genre, one of the few Goosebumps books that still unnerves me (it’s the endless slide) and the Horrorland Horrors are both my favourite Goosebumps monster and my biggest gripe with the series today – they changed their designs! They used to look like this – buff 50’s greasers in tight t-shirts and jeans, now they look like something off of H.R. Puffenstuff, that is not an upgrade (though I think it might be closer to how Stine and the book imagines them but sod that, monsters that kill you via theme park for their entertainment are far cooler when they look like they came out of American Graffiti). This figure is just excellent, they nailed the Horrors’ head design perfectly, this thing almost looks alive, he also came with great accessories, I think I may still have the Welcome to Horrorland sign but I really hope I still have his black ice cream cone, black ice cream must be a thing in real life mustn’t it? Someone must have made it *Googles* yes, yes they did – you can make it with Liquorice or Sesame, this blog even tells you how - fantastic.

If you couldn’t be bothered to read the above section – all of the figures are good figures, though lord knows why they chose to make a figure, even a good figure. out of Mr Mortman when they could have made a mud monster or a punk rock skeleton. These figures aren’t exactly super easy to get but they’re not exactly super hard either, your best bet is European websites where they turn up carded fairly often, Mortman and The Horror seem to be the easiest to come by, Mortman is the only figure I’ve seen at bootsales in recent memory for instance. Monster Toy fans should seek ‘em out, even if you don’t like Goosebumps: around 5” they work particularly well as companions to Sungold’s Monster line and are all of pretty common but - in the cases of the Killer Doll, Green Monster and Secretly a Bug Man anyway – not-very-often-produced-as-action-figure horror standards so they’re gonna look good and fairly unique while still totally fitting with the rest of your shit. Anyway my enthusiasm cells have depleted, I’m gonna go recharge ‘em by making black ice-cream, thanks for reading, go eBay yourself some Monster Bags.
Posted by dwitefry at 08:40

Email ThisBlogThis!Share to TwitterShare to FacebookShare to Pinterest
Labels: A Tribute To, Horror, Toys