So I skipped last week’s Pop Culture League because I’d already written a fears-based post for the mannequin-based post, and we’d just had a family bereavement and I was too depressed to get out of bed long enough to write 500 words about my pant-shitting fear of frogs and toads (but not Kermit, Kermit’s cool). But things are more in my favour this week, so what’s the topic: Here comes Halloween! It’s the most wonderful time of the year.

Given my undying love of Alice Cooper it shouldn’t come as a surprise that The Coop will often hog any Halloween playlist I’m making because it’s Alice fucking Cooper. Welcome to My Nightmare, a song that is absolutely about 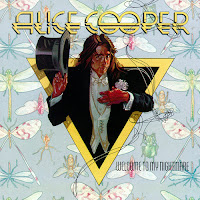 welcoming you to a nightmare, opens many non-Halloween playlists I make so of course it should open every Halloween playlist possible, though if you’re having guests it might be wise to put it on about 20 minutes into the list because no one ever arrives on time and it won’t be able to fulfil its function of bringing people aurally into a world of nightmares if they’re still on the bus. You should also definitely have Keepin’ Halloween Alive, Alice’s (successful) attempt to create a Halloween Christmas Carrol – which of course is a stompin’ hard rock track because it’s Alice fucking Copper. Other great ‘repeat offenders’ that I wholly recommend include I Love the Dead (from Billion Dollar Babies), Inmates (We’re All Crazy) (from From the Inside), Can’t Sleep, Clowns Will Eat Me (from the special edition of Dragontown) and the demo version of He’s Back (The Man Behind the Mask) (from the Life and Crimes of Alice Cooper), not the synth-y one that was released as a single, the one who uses the arrangement and backing track for Trick Bag. You also need to remember that no fucker listens to the verses of anything at a party so even though Feed My Frankenstein’s about his dick and Teenage Frankenstein which is effectively Wicked Young Man with less Nazi you can happily sling both on, they’ve got a monster’s name in their titles (well technically the name of the monster’s creator), people will be satisfied. The same goes for things like American Witch by Rob Zombie and Dead Bodies Everywhere by KoRn, neither are as on-the-nose as their titles would imply but they both do great for Halloween CDs, or playlists, as no one uses CDs anymore.

We’ll just get the two most obvious ones out of the way – Halloween by The Misfits, This is Halloween (I use the Marilyn Manson version) and Every Day is Halloween by Ministry, I’m not a big Ministry fan but it’s kind of a necessity – and move on to songs about horror movies (whether they’re from them or not) and horror icons, which are easy picks, always satisfying, always get a good response and are fairly plentiful. A few of my favourites include: The Hills Have Eyes by The 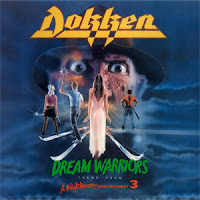 Meteors, Dream Warriors by Dokken, Haddonfield by Wednesday 13, House of 1,000 Corpses by Rob Zombie, Bela Lugosi’s Dead by Bahaus, Pet Semetary by the Ramones, Killer Klowns From Outer Space by the Dickies, Vampira by the Misfits, Them by The (later) Misfits, 13th Floor Vendetta by The Damned, Bates Motel by the Hitmen, Creature from the Black Lagoon by the Cramps (it counts) and, you know what, yeah, Nightmare on My Street by DJ Jazzy Jeff & The Fresh Prince, I’m ashamed but it’s perfect for the season (I also sometimes slip in Somebody’s Watching Me by Rockwell). Actually Freddy Krueger’s a little goldmine for the Halloween playlist, he has three songs about him – Dream Warriors, Nightmare on My Street and Are You Ready for Freddy by the Fat Boys AND he had his own album Freddy’s Greatest Hits which you can pull from, Dinosaur Dracula recommends, nay, demands the track Obsession (by The Elm Street Group featuring Freddy Krueger). While we’re on novelty songs, don’t be ashamed to spin ‘em, I know I’m not (but then I’m not ashamed to play Nightmare on My Street, well I AM, just not on October 31st, though that could very well be considered a novelty song) I cannot have a Halloween playlist without The Monster Mash by Boris Picket & The Cryptkicker Five or Jack the Ripper by Screaming Lord Sutch.

Which brings me back to more ‘repeat offenders’, let’s check off Bark at the Moon by Ozzy Osbourne, it’s about werewolves (sort of); Thriller by Michael Jackson, the only song by Jacko I can stand and that’s almost entirely the fault of the video; Number of the Beast by Iron Maiden; Lullaby by The Cure which disturbs the shit out of me; Dead Man’s Party by Oingo Boingo because if I don’t put it on here a friend of mine will come and find me AND because it’s awesome and because it’s referenced in Buffy and god this has become very 80’s hasn’t it? I feel dirty. 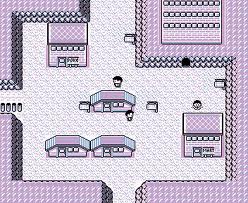 Getting away from the 1980s – YouTube makes making Halloween playlists easier than ever, not only can you find just about any song you want, with lyrics, and that includes everything on every 9.99 3 disc Halloween compilation any shop can sell you (by the original artists no less) but because it is full of theme tunes – and it’s not just John Carpenter’s either, though the themes for Halloween and The Fog should damn well be on our playlist – from Friday the 13th and Nightmare on Elm Street to Skeleton Warriors and the Goosebumps TV show I think the only theme tune I’ve not nicked of eBay at one time is the Buffy the Vampire Slayer Theme by Nerf Herder because of course I own the Buffy soundtrack (they haven’t invented the metaphors for how much I love that show). AFB’s pick for unusual theme that works really well for a Halloween playlist? Midsomer Murders, it works so damn well. I’m adding a new theme this year because I went to Walt Disney World and bought the CD so now I have The Twilight Zone Tower of Terror Theme (which is just a remixed Twilight Zone theme) but that’s not really relevant to YouTube as I paid for it, what is relevant to YouTube is my recommendation to investigate both video game and wrestlers’ themes because they get often overlooked/forgotten about and that’s bollocks, my top picks are any of the Undertakers’ themes (the current, Rest in Peace, is great) and the Lavender Town Theme from Pokémon Red & Blue, nothing will upset the nerves of your geeky guests more than that bloody town and it’s bloody jingle.

More ‘repeat offenders? Oh ok, how about two ghostly songs that I don’t think are actually about ghosts? That’d be Her Ghost in the Fog by Cradle of Filth and The Girl in the Woods by Frankie Laine; then there’s Science Fiction Double Feature by Richard O’Brien because it’s just made up of b-movie references and to infuriate a friend of mine, sometimes I use the ‘punk’ version by Joan Jett; Grim Grinning Ghosts from the Haunted Mansion of course which is actually about 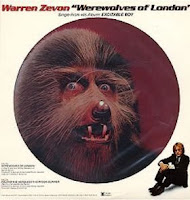 ghosts; Godzilla by the Creatures (Siouxsie Sioux usually shows up on my playlists because she’s amazing); Halloween by Kirsty MacColl which is technically a love song but see my comment about Siouxsie Sioux; Werewolves of London by Warren Zevron because as far as I know it is exactly about werewolves in London; Monster Love by Ghouls Night Out which is really about banging a monster because who says Monsters can’t fall in love dammit; Witches in Bikinis by Witches in Bikinis; Alice in Hell by Annihilator; She was a Teenage Zombie by the Murderdolls; Ghost Riders in the Sky, I usually use Spiderbait’s version because of the sort of people who listen the playlists I make but I honestly would rather play Frankie Laine or Johnny Cash or even the original by Burl Ives and of course Ghostbusters by Ray Parker Junior and On Our Own by Bobby Brown, they’re both shit songs but they go down well at parties. If I’m making a playlist for myself I’ll usually put Turkish Song of the Damned by The Pogues on it but you need to actually know the words to get why (it’s about a ghost coming to take revenge on someone who left him to drown) and from the chorus you’d think it was a just a song about a dance, like The Funky Gibbon or something. God I like listing off songs, I’m SO. FUCKING. DULL.
We’ll finish up this directionless bullshit with a song who’s entering my playlist for the first time but is guaranteed to become a repeat offender and that’s Double Trouble by The Frog Choir from Harry Potter & The Prisoner of Azkaban, it’s a wonderfully creepy song with lines taken form the Three Witches speech from Macbeth. It’s bloody haunting and from the mouths of the very witches that are almost certainly responsible for every Halloween witch that isn’t being worn by someone with a fake tan and no knickers. Oh there is one other thing I like to do, and this is probably not something I should admit to on a blog but fuck it, I like to put Look At Your Game, Girl by Charles Manson onto playlists for parties, and when anyone asks why this weird little song is on there, I tell them who sings it, shivers down spines occur enough for me feel smug and keep doing this, you want to genuinely creep someone out (and ruin your chances of sleeping with anyone remotely sane ever again), put that song on. Now I’m done, thank you for reading this stream of crap, I don’t put links to YouTube because they go down so much and I hate finding blog posts with dead video links, so go Google some stuff I mentioned.

From the other members of the League:
Alexis Universe has their Halloween decs up
Memories from Mr Smith’s Plastic Bubble, 20 Years Before 2000 and 2 Minute Toy Break
Whatever I Think Of is right
And some Funko fun from The Toy Box