Examples of Crap I Waste My Money On: Bootsale Report 9!* 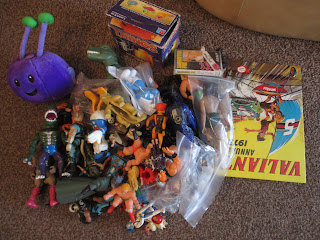 Today’s bootsale experience started off looking far from promising, it was cold and gloomy and below average size and I felt like dogshit, passing out levels of feeling shit, it came on pretty much as soon as I arrived - but by half ‘way round the sun was shining, I’d had a shitty burger (I’m the only person for whom market food heals rather than ills it seems, well the only person who gets this reaction when they’re sober anyway) and I left with three carrier bags full of dirty toys and a happy feeling, and dust up/in every-fucking-where. 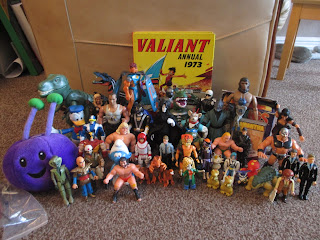 While your thoughts on Space Precinct may ultimately be the decider here as far as I’m concerned there’s no duds to be found, sure that’s just a cheap hollow plastic Pokémon just under the Warlord’s left hand but it’s also Octillery:  a fucking bazooka octopus, there’s never buyer’s remorse with a bazooka octopus. Now let’s waste a thousand words or two talking about some of them in some more depth eh? And as always I know that what I’m about to spotlight is nowhere near the best items in that picture, that DragonFlyz figure? I wasn’t even sure it was released; the dinosaur bloke next to The Sandman? Never seen one in person before in four years of buying, that Valiant annual is from 1973? it’s old enough to be a grandfather – but fuck that, let’s talk about Page 3 Girls and Playmobil, so are you sitting comfortably? Then I’ll begin: 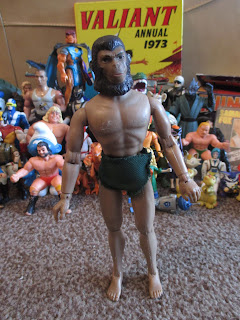 A Naked Mego Ape!
£5 ($6.26)
This was a little treat to myself, perhaps for spending two days painting fences, perhaps just because I’m an indulgent prick, or maybe just so I could say I bought a Mego figure at a bootsale. Yes he’s naked, yes he was strangely sticky, yes he was a fiver but still something to brag about, especially if you leave all those details out when doing the bragging – as I fully intend to do at conventions and on various forums, I have so little life it’s counted in minus numbers.  I’ve never said this about another male primate before but I really like this lad’s pants, I want to believe they’re actually the pants the figure wears out of the box and that Mego made special little cave-man diapers for their Planet of the Apes toys so they were canonically correct even down to their knickers. Speaking of knickers, and being naked: 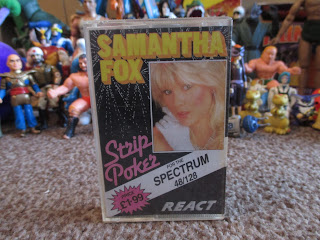 Samantha Fox Strip Poker!
50p (63¢)
I’m not buying any more old video games this season because this cannot be topped (heh, topped, how appropriate) I don’t own a (functional) ZX Spectrum at the moment but there was no way I was going to pass up the chance of owning a complete copy of Sam Fox Strip Poker in such good condition for such little money, it’s going to live next to my Mega Drive and make every day that little bit more 80’s and that little bit more gay and who doesn’t want their days to be more 80s and gay? Homophobic millennials I guess but I’m not one of those so bollocks. Sam Fox, for the confused and young, was a Page 3 model - which meant she got paid to get her tits out in The Sun newspaper, she was VERY popular and moved on from getting nude (which she was good at) to singing (which she was ok at) and presenting telly (which she wasn't very good at at all). In 1986, at the height of her popularity, this came out: it’s exactly what you think it is and exactly as bad as you think it could be, it’s an average poker simulator with pixelated pictures of Sam Fox undressing and I adore it, it’s genuinely one of my favourite games on the system. And stuff your Hot Coffee and your Manhunt, at the time this was video game controversy, for just £1.99 kids could buy bare knockers in WH Smiths, of course they could get hi res colour shots of the same boobs in a newspaper that cost pennies in the exact same shop but this time it was a video game! The wrongness! Sam Fox is a national treasure, and yes I’m being serious, Dame Samantha Fox, make it happen Liz, make it happen. 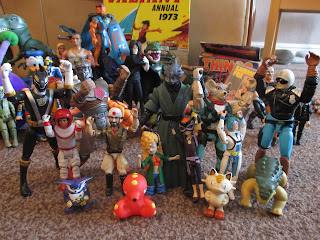 The Dirty Stall Was Back!
£5 ($6.26) for everyone dancing
Last weekend a new toy stall was at Dunton Bootsale, I have dubbed it ‘The Dirty Stall’ because I am creative, he was back again this week, I’m hoping he’ll become a regular. I should have taken a picture; this bloke just has trays and trays of toys one side of his van and then trays and trays of video games on the other. It’s filthy, disorganised, vast, half the toys’re half broken but I think it’s great: despite excellent prices and a great variety the dirt and ginormity seems to keep most of the dealers, any anyone who hasn’t had all their jabs, away but for someone like me – shameless and fully inoculated like I am – it’s a treasure trove to explore, and I can explore it at my leisure without it having first been picked clean by people who’re going to sell the stuff for three times the price without cleaning them. The results speak for themselves and prove my outlook on the stall completely correct, check it out: Mezogog (who was only available in a box set)! A Biker Mouse! A racial caricature An early Corps figure! A ‘Mannix’ Bootleg that’re silly expensive online! A COPS & Crooks figure! One of the hardest to find Captain Scarlet figures! A Bazooka Octopus! A tiny Big that makes my logic centres overheat! Seriously! That makes no sense! He’s called Big the Cat! His purpose is to be big (and fish)! Why would you make a small thing of a thing that’s claim to fame is being big?! That’s illogical! You make Vulcans cry! And because of my willingness to risk tetanus for action figures from the 1990s all of these lovely toys now have a home and someone who’ll appreciate them and not leave them out in the dust and sun all day surrounded by the severed limbs of their friends and families – and if you’re (real and) thinking “whatever, you’re just going to put them in a box or on a shelf and not really appreciate them like a child would”, know that I always fully appreciate every Meowth. 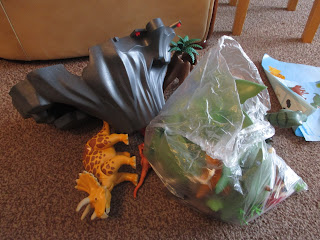 Dinosaur Playmobil!
£5 ($6.26) for everything
Even though I’ve subsequently told everyone who’ll listen that it was, I don’t think this was quite the steal I was thinking it would be. Doing very speedy maths while the stall holder reminded me how much Playmobil was in stores (and she’s right, it’s bloody pricey) I figured that a fiver was a good price for the dinosaurs alone, let alone dinosaurs plus a Playmobil volcano (when did Playmobil get so cool? I feel like I went to the toilet one day and when I came back Playmobil was badass) and a whole bunch of other stuff that I could sell on when I sell at a bootsale a little later in the season. This is still true in theory but I’ve ended up keeping so little of the set I ended up paying five pounds for a t-rex, some velociraptors and the pleasure of having a bag full of Playmobil rocks in my loft for a month. So while it was a good deal, maybe it wasn’t such a good deal for me. Anyway you know that weird look Playmobil has? Like plastic that’s not quite mixed properly? Like it should be rough but it’s really, really smooth? That pleases my senses and my soul. 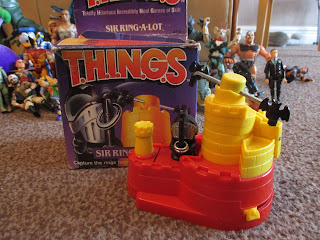 Sir Ring-A-Lot!
50p (63¢)
A boxed, working and (almost) complete (it’s missing a ring) T.H.I.N.G.S. game for the price of pixelated bazoomers a Cadbury’s Wispa – and it’s one of the really good ones! Sir Ring-A-Lot! Sure he’s not quite as magnificent as E-E-E-Gor or Eggzilla but he sounds way more like a sex toy and for me he’s THE T.H.I.N.G.S. game, the Lion-O or Soundwave of the line, the one you think of first when you think of it (sorry Flip-O-Potomus). Acting as a weird mid-point between Travel Boggle, Action Figure and Playset T.H.I.N.G.S. don’t get nearly enough love but the people who do love ‘em seem to REALLY love ‘em, it’s often the way, talk to me about Hornby’s Gladiators toys some time and watch me prove it. T.H.I.N.G.S should not be confused with T.H.I.N.G.Z. that is a completely different and way more extreme line of mini-figures who are also cool, but not quite as cool as bats vs knights for shiny things. 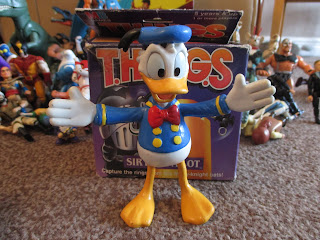 Bendy Donald!
30p (38¢)
Last time we ended with a Disney toy and it was a very negative story, so I thought this time we’d end with a Disney toy and a positive story, also he doesn't stand up by himself so Sir Ring-A-Lot is being helpful. Earlier on in the bootsale I turned down the chance to buy this, a bendy figure a couple of decades old now, for a fiver from a bloke selling almost exclusively toy cars and computer components (because of course). It’s not a bad price for one but not the level of bargain that Disney toys generally need to be for me to buy ‘em. Come another stall and the same Duck costs me 30p, this Duck though was much dirtier and splashed with Tip-Ex and dried Slush Puppy (seriously, it’s all I can come up with for what it could’ve been) but that’s not a problem for someone who’s been buying and cleaning dirty toys for years now. So the moral of the story is: get to know what you can and can’t clean from the things you want to buy second hand from bootsales, yard sales, flea markets etc and you can avoid paying five pounds to some I.T. douchebag with bad hair and his girlfriend and instead pay 30 pence to some wide boy market trader and put the difference towards naked Mego monkeys. This is the sort of shit they teach in church, mate.

And I’m out of enthusiasm, luckily it’s Easter weekend so I have enough chocolate to top up the ol’ enthusiasm tanks with blasts of pure sugar rush for a couple of days now but I’ll be kind and end this here before I do. I’ll leave you with this: I’ve had Samantha Fox’s Touch Me (I Want Your Body) stuck in my head since I bought her video game but you can’t sing shit like ‘touch me, touch me, I wanna feel your body’ outload at a bootsale where you’re surrounded almost exclusively by old women, fat men, the wives of very religious fellas and dogs so now I’m gonna go fucking dance to it in my pants, enjoy that mental image.
Posted by dwitefry at 06:40

Email ThisBlogThis!Share to TwitterShare to FacebookShare to Pinterest
Labels: Bootsale Report, Disney, Examples of Crap I Waste My Money On, Toys, Video Games