So me and a friend went to Pride in London which was held last Saturday (the 8th), I got to be the token heterosexual and it was very fun indeed. If you’re wondering why a completely heterosexual man would go to Pride the answer is a) because my friend asked me and b) a show of support, plain and simple. I do support being out, being proud of it and being able to be so and I am more than happy to turn up and show this by my presence, by my complete nonchalance and by occasionally hugging very muscular men in nothing but shiny mock-leather thongs and rainbow body paint. Actually I’m happy to show my support to anything by hugging anyone, I just like hugging.
For a bit of history nicked from Wikipedia: London Pride has been going since 1972 (though technically 1970) that’s usually held around the first weekend in July, a time chosen because it was the closest Saturday to the Stonewall Riots, an American uprising of Gay and Lesbian New Yorkers after the police raided the Stonewall Inn. It has evolved from a very militant thing to an all day party and I know its drawn accusations of selling out. I’m not a member of the LGBT community, I did grow up being ostracized and beaten up but it was for other things, so I don’t know what right I have to comment but fuck it it’s my blog so: my feelings are: being yourself is worth celebrating as much as fighting for so either should be available at Pride and it is: there are still slogans all over the place and still organisations in the parade that aren’t there to shill for supermarkets AND there are crowds of half-cut people out dancing in the streets to some surprisingly listenable techno cuts and, having a bit of an interest in modern history, especially the 1950s upwards, I am somewhere between pleased and amazed that we’re got to the point where it’s seen to be better for a company’s image to support Pride than to not to.
Anyway I had a fucking great time and I clearly wasn’t alone in that, the event attracts around a million people and easily 80% of them were delighted of course 60% of them were pissed but... anyway here are five random awesome things that I came into contact with, so are you sitting comfortably? Then I’ll being: 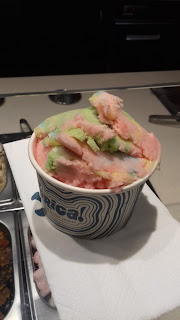 Rainbow Ice-Cream!
This was a special, put on by a shop called Yorica! - which is a free from shop with a branch in Soho. I’m not a vegetarian or vegan and have no allergies or moral issues with eating anything - I’d eat human if it came curried - and shops like Yorica are very expensive BUT if you tell me that 1) there’s a promotional food item on sale and 2) it’s fucking rainbow then my ass is there. For all I know you can now mix sorbet and ice-cream perfectly with today’s new-fangled technology but if you can’t then eating this is the experience that would give you if it were possible, it was teeth-shatteringly sweet and reminded me of the time I crushed a whole packet of Refreshers and put it all in my mouth (we won’t go into why shall we?) – none of these observations are to be taken as a negative; it was good ice-cream. 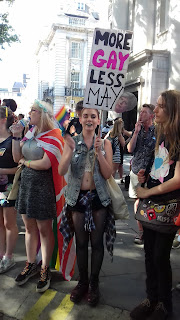 The Best Sign!
I took three pictures the whole day, this is the second one in this article. That is the best fucking sign and to make it better you know that girl thought of and made it all herself. Her existence makes me proud of my country. As a slogan it works for all manner of reasons from Teresa May’s seeming intent to become Margaret Thatcher 2.0 (and Thatcher just loved the gays didn’t you Maggie? What section was it again, 22? Oh no it was it Section 28) to rhyming but I think I like it mostly because of the severed head of Teresa May’s expression: it’s like she’s saying ‘ooh I don’t think so’. The girl was lovely too (and so cute!) I wish I’d gotten her Facebook even if she wasn’t bi - because then I’d still know one more awesome human being, thanks for being awesome More Gay Less May Punk! 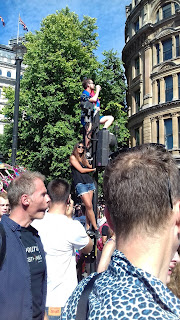 Inventive Parade Watching!
You know you’ve got a good turn out when people have to start fragrantly breaking rules just to see your parade/march, this picture is just one example of many such dirty vandals and god bless ‘em all. The bloke, who I’m gonna call Cassidy because fuck me does he look a lot like Cassidy from Preacher (poor bastard), staked out his claim on that traffic light early on and became a figure of reverence soon after, when we saw him at this point he was pretty much Rainbow Jesus and was being cheered and handed various alcoholic drinks from various strangers – quite right too. Hotpants Lady joined him slightly later, by which point any tall structure in the vicinity (including several humans) had been climbed like LGBT denizens of Spider-Island to watch the parade. I bring this up not just because it’s a cool picture (I want Cassidy to be the figurehead on my boat in the exact pose he has there) and because I like it when people give no fucks about ‘proper conduct’ but because it really does show how big London Pride has become, of course you can decide for yourself if that’s a good or bad thing.

I Got To Go On A Fireman’s Hose!
Leave it, leave that joke you’re clearly thinking of where it is thank you. Soho Fire Station (I think? Is that the station that backs onto Chinatown?) opened itself up for the day as a special event for Pride, I’ve never been in a firehouse before and instantly became four years old: for an empty building it was damned interesting. The best bit though, the best bit was out the back they had a fire engine, fireman and he let you shoot the hose. It was so fun! I’d like to think that everyone watches firefighters at work and wants a go of something and the hose would certainly have been my choice, and it was bloody marvellous! A mate of my mate went on before us and not only got the fireman to turn it back to full pressure (it’d been turned down for some adorable children to have a go) but also drenched two silly bastards who decided to run under the jet of water to get around to the other side of the station, what did they think would happen?

Mr Bones!
Have you seen those clips for really cheap 1-800 numbers? The ones where you’re certain were made by the local paedophile in this basement? The ones that are so laughably pathetic they’re sort of charming? That’s what I thought of when I saw this guy, who was performing in Leicester Square (one of the three ‘hubs of activity’ as it were) presumably because it’s not within 100 yards of any schools but also because he knew he’d get lots of people watching his ‘act’. When I was standing there this act consisted of making Mr Bones ‘dance’ (read: bob up and down) and ‘sing along with’ (read: flap jaws out of time to all songs ever) to Low Rider by War (read: the Marmite song) and occasionally accost members of the public. I thought it was superb, it was a total hipster ironic moment but it he was so pathetic and cared so little about being pathetic that he was so fun. For all I know Mr Bones is a long time LGBT performer with a long history of supporting Pride events all around the country but I have a  much stronger feeling he was just some chancer called Dave and said at some point “ah don’t be silly, no one notices that I can’t do it”.
Pride Dogs!
End on a high note. Pride Dogs are now the best thing about Pride. It’s become a thing to take your dog to Pride wearing rainbows apparently and as a fan of both of dogs and rainbows I am so down with this. If you can’t see the charm in dogs with rainbows then you’re going to hell, I’m sorry to sound judgemental – especially in a post about an event made to spread tolerance – but it’s true, these little buggers are so, so adorable and if you don’t’ appreciate that then you’re just a bad person, fuck you. I kid, but only slightly.
Unfortunately neither me nor my friend got a picture of the three sausage dogs in rainbow neckerchiefs who were the joint number 1 place in the Pride Dog category (which totally needs to be added to Crufts) because the little shits kept moving but there was plenty of other Pride Dogs running around and I stroked every one I could.

And there you are, Five Things I Did on My Pride Holiday which – much like Pride Dogs at Crufts because this is the same gag – needs to exist and hey it can exist now, Section 28 got repealed in 2003. Not just a call back but another chance to bring up what a horrible person Margaret Thatcher was and how we should never trust anyone who considers her an inspiration, I repeat:

That includes former Prime Minister David Cameron, former Spice Girl Geri Halliwell and alleged comedian Jimmy Tarbuck by the way. Which is a point; I saw a lot of Spice Girls t-shirts at this day out, not a complaint, but, yeah, what was with that?
Posted by dwitefry at 05:50