So simple looking, yet so complicated

Yeah this isn’t something I thought I’d be writing about yesterday, let alone being up until quarter part 1 in the morning writing about but here it is and here I am, meet the Pocket Pets. If you haven’t heard of the name ‘Pocket Pets’ that’s ok, neither had I before yesterday, but I can almost guarantee you’ve seen one of the toys Tomy released in the line because moulds for these are still being used forty year later– I know the Owl and Penguin are in stores as of this writing. What Pocket Pets were was one of Tomy’s many lines of small wind-up toys, most of these lines are very simple – one set of toys under one name (i.e. Get-Along Gadgets, Snow Funnies), some might get a second wave (The Not-So Grand Band, Flip Floppers), a sequel line (Kid-A-Long Kids to Kid-A-Longs) or perhaps be re-released later on in say a different colour (Pop Overs) but they’re not very complicated. Pocket Pets on the other hand ARE complicated and I had to write the following down to understand them, because understanding the various releases of wind-up toys is how I spend my Friday nights (I’m so alone). Also because Pocket Pets are the most commonly seen Tomy wind-ups on the secondary market - certainly on eBay – so it was worth doing, so are you sitting comfortably? Then here’s my findings:


The earliest date for a Pocket Pets release I could find is 1976, that is this card: 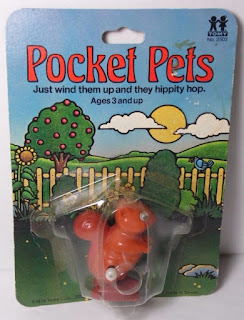 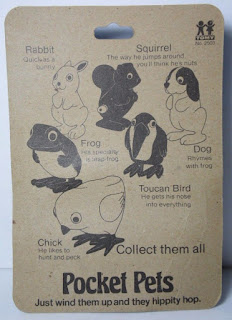 It has an ornate logo and a cruder art style for the cardbacks, six toys were released on this card: Rabbit, Squirrel, Dog, Frog, Toucan Bird and Chick. Some listings date this card at 1977 but either way this would imply that this is the original line-up for the line.

In 1977 (apparently) Pocket Pets were released in mainland Europe as Hoppy Hops: 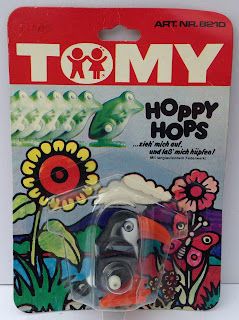 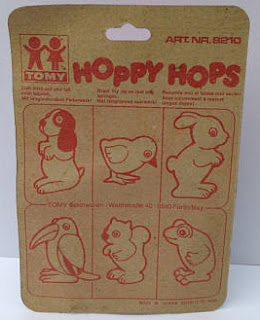 There’s no English on the packaging that I could find and the line-up is the same as the first Pocket Pets cards: Rabbit, Squirrel, Dog, Frog, Toucan Bird and Chick.

In 1978 the card is revamped for the addition of its second wave of toys: 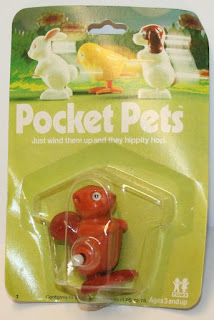 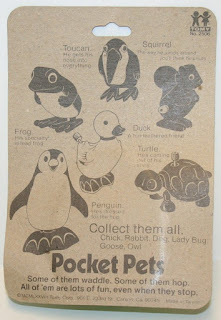 The card art is completely altered to look like a gardening catalogue rather than a Mr Men book, with a sloping white logo and the Rabbit, Chick and Dog racing above it. The card back doesn’t show all of the animals available and makes it appear as if the Dog, Chick and Rabbit were dropped but in reality the whole card makes up the list of toys available, Tomy did this a lot – Kid-A-Longs, Kid-A-Long Kids and my beloved Webster for instance all had the line-up spread across the back and both sides of their boxes. So released on these cards are Rabbit, Chick, Dog (shown on front), Frog, Toucan, Squirrel, Duck, Penguin and Turtle (which is actually a tortoise). The new additions are the Penguin, Duck and Turtle for those failing to keep up because my writing’s terrible today.

1978 is also the date on the listings I’ve found for wave 3, it wasn’t unheard of for a line to add another wave the same year (though generally companies tended to add a wave annually) so I see no issue with this being the release date for it: 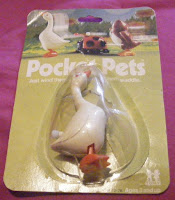 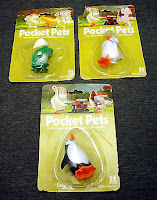 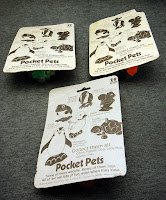 Packaging is identical except for the animals speeding across the top, which is now the three new animals: Goose, Lady Bug and Owl. The Owl was one of my favourite toys as a child just fyi. The cardback for is identical to its predecessor and as I’ve not seen the Chick, Rabbit or Dog on this card (I’ve seen Duck, Turtle, Toucan and Penguin, who are all featured on the cardback) it’s very possible that they were dropped in favour of the three new guys. So you can find the Owl, Goose, Lady Bug, Frog, Toucan, Squirrel, Duck, Penguin and Turtle on these cards – at least.
The reason I put this as wave 3 incidentally is because the ‘wave 2’ cards have all the original animals plus three more but the Owl, Goose and Lady Bug are not featured on those cards.

In 1983 the line was repackaged as Tomy Comics Pocket Pets: 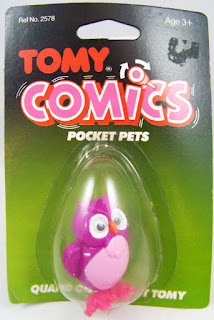 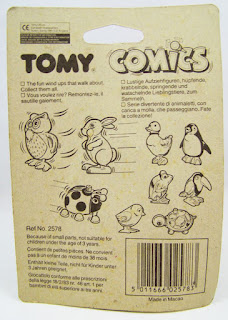 This is a multi-language card and was from a French seller so this may have only happened in Europe and the UK (English is on the card). Regardless the Owl, Rabbit, Lady Bug, Duck, Penguin, Frog, Toucan Bird, Chick and Turtle were given whacky new colour schemes. The Goose and Dog having been dropped – in fact while the Goose seems to be very common on the second hand market it seems to have only been a part of Pocket Pets for one Tomy iteration, the ‘wave 3’ cards. 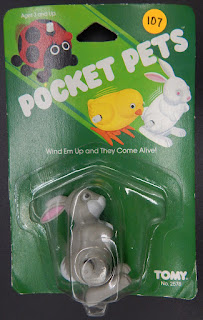 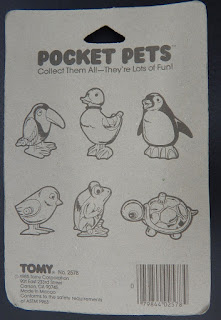 This is the dark green card with the big drawings of the Lady Bug, Chick and Rabbit on it. The cardback only features Toucan Bird, Duck, Penguin, Chick, Frog and Turtle though as we know that Rabbit was released as well so it’s VERY likely Lady Bug was also available on this card as it’s also shown on the front. 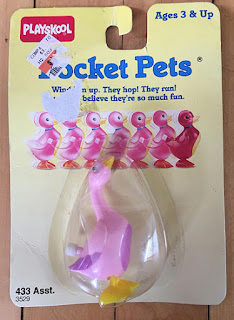 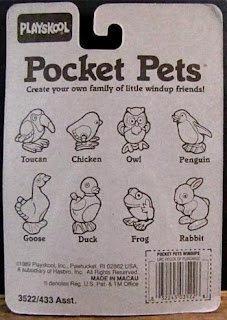 Their line-up was Toucan, Chicken (Chick), Owl, Penguin, Goose, Duck, Frog and Rabbit, all of whom used their Comics colours except Goose, who was repainted bright pink to match the animals who’d got a Comics release.