My Great-Grandfather was a Clown!

My great-grandad was a clown and no-one told me before today!


He was also the exact reason people are scared of clowns. That there is Jack Murray as his alter ego ‘Jacko’, Jack Murray was my maternal grandfather’s father, who I know as ‘Big Grandad’ because he was a bit tall and because he was married to Big Nan: 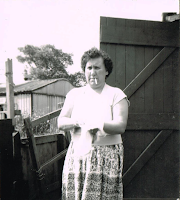 This woman once chased down and tried to forcibly strip a young policeman on her granddaughter’s wedding day. But back to the clown she married, I was clearing out the far corner of my Nan's loft today when, stuffed in a box full of puzzles we found a plastic bag filled with old photos that my late grandfather had taken from his mother’s house after she died – which sums up my grandad nicely: 60 years of memories and he stuffs ‘em in a cardboard box with some jigsaws and stuffs that next to some old fishing gear.
“Must be some photos Dad took from Big Nan’s” says my Nan
“Yeah, must be, it’s full of clown photos” agrees my mum
Why would grandad have clown photos? I think as I’m squatting in a space barely big enough to fit a Teddy Ruxpin in
“Yeah, full of clown photos” Nan shows me THIS photograph: 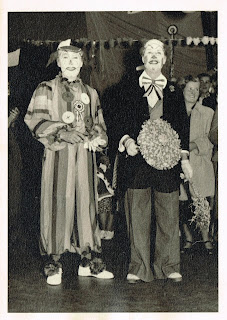 “Have a look at this”
“Wait, was great-grandad a clown?!”
“He was a children’s entertainer” Well lah-de-dah, sorry. What Nan meant is that he didn’t work in a circus; he was a clown-for-hire.
I learnt I was related to a clown, there was pictorial evidence and it was as gloriously terrifying as I could have hoped! And yesterday I got a vintage knock-off china Ninja Turtles money box that makes Leo look like he’s from the Planet of the Apes – this is one of the best weekends ever! After a deductive process over ham sandwiches we’ve decided that most of the photos you’re seeing here were taken in the late 1940s, they’re getting on for 80. What’s even more impressive than these photos surviving all that time is that a local newspaper cutting survived as well, it was so old it was printed on hemp: 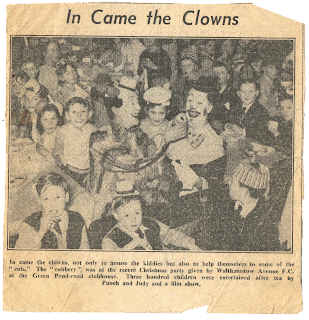 We’ve got the full photo used in this article too; Big Nan must have got one off the paper: 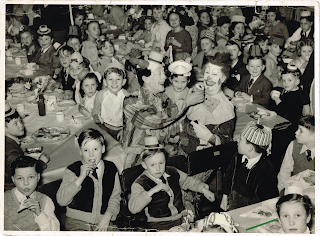 You’ll notice that the only kids looking at the jolly children’s entertainers aren’t smiling and of the two children closest to them one looks clinically depressed and the other like a small serial killer, none of you should be surprised by this. This was a Christmas party held at Walthamstow Football Club, the local team’s clubhouse and it couldn’t be more working class if Bruce Springsteen was playing over it, I’m genuinely proud that Jacko was part of stuff like this, even if he was doing it for money and all he was doing was creating another generation of  Coulrophobics. 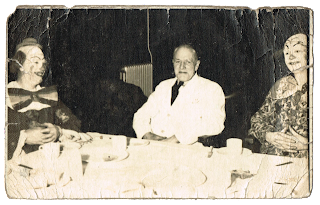 This one is my absolute favourite, because devoid of context – and we have no context, no one will ever know what was actually going on here – it looks like two clowns are about to kill Colonel Sanders.
But wait, it gets better because…Jacko had a horse! 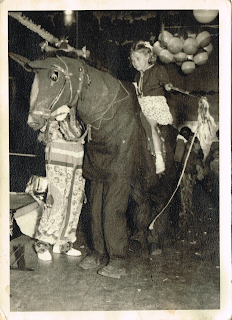 We found a programme for a production called Clowns of the Town that Big Grandad was Stage Manager for (and also a star in) and it mentions Ugo the Horse, thus I’m presuming that the two man power trip you see here was called Ugo. Jacko and Possibly-Ugo used to work together a lot so it makes sense that he’d get them a job in the show whether they needed (or wanted) an horse in it or not, here’s a picture of them dancing together: 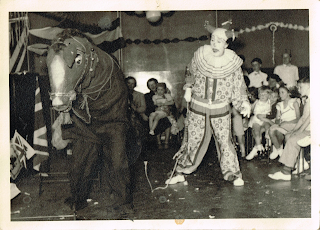 It’s like Pennywise popped into Disneyland on opening day, if you look closely in the background you can see Fess Parker missing a cue. I actually really like Possibly-Ugo, he does indeed have that weird otherworldly feeling that the early Disneyland walk-around characters (especially Pluto) had and it gives him a charm – though he does look more like a donkey to me, a giant donkey but a donkey nether-the-less, I would not want to play Buckaroo with him though. 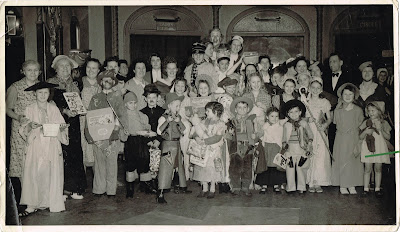 Everyone in this photo is almost certainly dead, but it’s actually a really nice photo to have. Yes it has a bunch of (dead) children posing outside a toilet with the terrifying visage of a clown appearing behind them but it’s actually a shot of a father taking his son to work. Just down from Jacko is a boy wearing a hat and chequered scarf: that’s my granddad, Jacko’s son. This may have been taken on the evening of the 1953 coronation (we found a souvenir programme for the party they had – yes they made a souvenir programme) but that would make Grand nearly 14 and I think he looks a bit too young for that.

I’d like to remind you all that these pictures feature a blood relative of mine, I can’t get over this: I’m related to a creepy clown! I can’t believe that no-one told me, that these pictures have been in the loft since before Pokémon came out and I didn’t know about it, if I wasn’t so pleased I’d be pissed off. Not even my dad told me! He must not know because there’s no way he’d fail to tell me I had creepy clown blood in me. I am in fact thinking of renaming this blog ‘Creepy Clown Blood’. 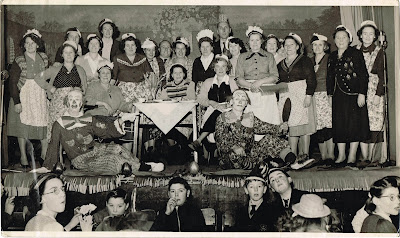 So that’s what I did today, moved shit around in the top of the house, hoovered up a small army of dead wasps and uncovered my secret creepy clown heritage, how was your weekend?

Email ThisBlogThis!Share to TwitterShare to FacebookShare to Pinterest
Labels: Horror