World of Dinosaurs at Paradise Wildlife Park: A Speedy Review

So here’s a thing
I love dinosaur parks.
Bear with me. Once upon a time there was Broxbourne Zoo, and Broxbourne Zoo was shit, in fact it was at one time voted the worst zoo in Britain. It was a small, dirty, disorganised place with animals stuffed into tiny cages and a bunch of pathetic amenities, but that time was a long time ago: today Broxbourne Zoo is Paradise Wildlife Park and while it’s still on the small side it’s the exact opposite of what it once was, without losing that cheap and cheerful charm, it also features a network of connected, raised wooden walkways allowing you to look down into the big cats and penguin enclosures which is both unusual and bloody good.
It also has a dinosaur park! 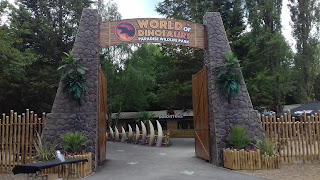 In case the entranceway there didn’t give it away, World of Dinosaurs has seen Jurassic Park: the JP theme tune is piped into the gift store and sound effects from the film are either recreated or ripped directly to make the calls for the Velociraptors and Dilophosaurs, but this slight bit of derivative is genuinely my only complaint about the whole place, and it’s not that much of a complaint – I mean how much can you really complain about having to listen to the Jurassic Park soundtrack while you shop? 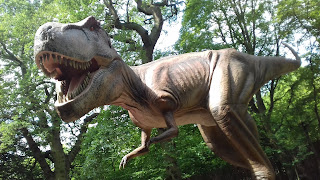 WoD is in two segments – a deceptively large walk-around area and an endearingly pathetic train ride, both are set in the woods that once surrounded Broxbourne Zoo - which is perfect, I know it’s not a technically accurate environment for some of the genus they have on show but big areas of tall-ass tress just create an atmosphere that screams ‘there should be dinosaurs in here’ and anyway if I wanted technical accuracy I’d be at the Natural History Museum not a tourist attraction at the back of a zoo.

The walkthrough is the main attraction, my first thought? “How much did this place fucking cost?” actually it wasn’t a thought, I said it aloud. Here’s how it is: animatronics are expensive – not as expensive as they used to be and not as expensive as, say, a rollercoaster but a good size animatronic will still cost you more than most cars. And every dinosaurs in World of Dinosaurs’s walk around (except hatchlings) is an animatronic, and they have *takes deep breath* A Pteronodon, a Baryonyx, an Anykilosaur, two Triceratops, two Stegosaurs, two Plesiosaur, a Brachiosaurus, a Carnotaurus, a (very derpy) Oviraptor, two Dilophosaurus, an Iguanadon, two Pachycephalosaurus, a Tyrannasaur, a Spinosauraus and five Velociraptors! 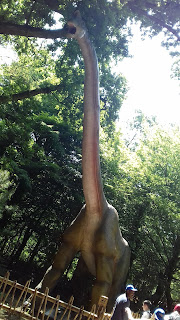 In case you missed that image there, they have an animatronic Brachiosaur. Now it’s not full-size, you could fan-wank it and say it was a young brachiosaurus but that’s still an animatronic the size of a house, just to put that in perspective – Disney doesn’t have one that big. More impressive is that the main animated portion of said huge robot is its head and jaw, in case you’ve never seen a brachiosaur (because you grew up in, I dunno, an underground colony on Mars) that’s the very highest part up a long, thin neck. God knows how they managed to make this thing structurally sound and reliable but I hope whoever achieved ‘make the Brachiosaurus’ head move on an outside animatronic that has to stand in the wind all year’ got some kind of engineering award. 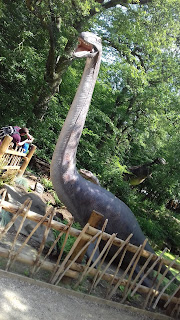 Most exciting for me personally was their full size animatronic Plesiosaur, a childhood favourite of mine do you know I don’t think I’ve ever seen another animatronic one? I mean I surely must have, I don’t believe that Paradise Wildlife Park is the only place in the country to have ever had a moving plesiosaur but I sure as shit can’t remember another. And it’s a really good sculpt too, it and the Carnotaurus ranking first for the animatronics in my mind, I say this because there’s a quirk with these dinos which I think I can explain and isn’t a criticism but is noticeable if you spend enough time looking at big models of extinct animals: the quirk is that they have a very noticeable and very constant style to them, now what I think has caused this is a) they’re all from the same shop and b) the rubber used for their ‘skins’ needs to be very thick to stand up to the British weather, the end result is a slightly less detailed dinosaur with a slightly more cartoony look to them, looking more like the big rubber dinosaur toys than Schleich’s models. I found it most notable on the Peteranodon, Triceratops and Akylosaurus and least prominent on the Plesiosaur and Carnotaurus, hence they look a bit more badass and me being a heterosexual male, I like my dinosaurs badass. Except the babies, the babies need to be cute and oh god the young triceratops is so cute: 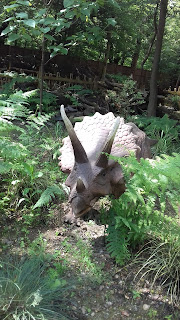 Look at it! it’s peeking out around a bush like it’s scared! 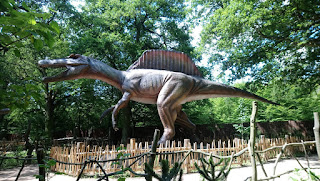 Placement of most of the dinosaurs seems a little random, I expect it may have been dictated by the location but it does create a basic ‘excitement curve’ with the two big carnivores about three quarters of the way ‘round before going back to (comparatively) smaller species like the Ankylosaur and ‘raptors to cool everyone down. The only bit of layout that really needs specific praise is putting the path between two Pachys that are both positioned as if charging, I thought that was cool and found myself hurrying through the gap to dodge the obviously oncoming signature move (Pachycephalosaurus are often shown ramming into each other with their hard heads, I don’t know if this is still considered ‘correct’) even though they’re clearly fucking models. Oh yeah: I’d say about 60% of the dinos are within arm’s reach, which is great for visitors who just have to touch like myself but an issue for a zoo that really doesn’t want you to touch their robots, they do have hilarious signs: 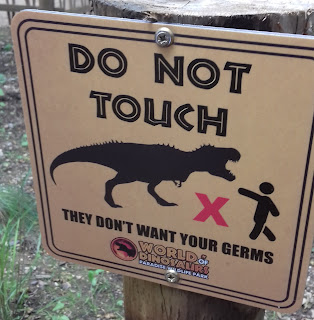 But most of the walkthrough was unstaffed so I still gave in and patted the Ankylosaurs (it’s my favourite! I couldn’t help it), hopefully I didn’t give it any germs. Might want to station a couple of folks down the far end by the Triceratops there Paradise Wildlife Park, it’ll be worth it to keep grabby bastards like me from wearing your dinosaurs’ rubber down.

The train ride (Dino Express? T-Rex Express? Something like that) is terrible in all the best ways and I loved it. Firstly because you ride THE BEST TRAIN EVER: 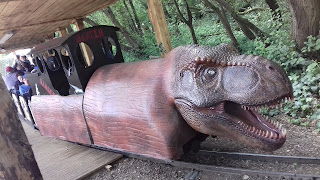 That train turns into a T-Rex! All trains should turn into a T-Rex! TFL Rail - make it so! Think of the tourist money having your tubes turn up at Liverpool Street or Kings Cross with the front looking like a bloody great dinosaur would generate! But you see how that train is clearly just the train that was there before but with some rubber stuck on it? Yeah that sets the precedent for the whole experience, I reckon that they must have dropped a million or more on that walk around, I think this train ride cost about as much as a Happy Meal, I loved it.

It’s just a train past a spattering of fibreglass dinosaurs, only a Dilo’ that it shares with the main walkaround part moves. It’s got a bunch of fan/child pleasing genus in there – Triceratops, Stegosaurus, velociraptor, T-Rex, as well as a Diatryma, the only prehistoric mammal in the whole park. Have you ever noticed that there seems to be only two poses for Diatryma models and the only difference is how open its beak is? Because I have and I greatly enjoy it. In fact if asked to pick a favourite fibreglass prehistoric creature (which comes up more than you might think) Diatryama is my answer, it’s the constant, as proven by it being in a park otherwise filled with dinosaurs and ‘not-dinosaurs-but-everyone-likes-them-to-be-in-these-places’ like Pteranodons and Plesiosaurs (hang on - there’s no Dimetrodons at this place!).

I like the moving dinosaurs, I like animatronics on general in fact, I’m constantly impressed and/or creeped out by them and continually impressed with how people can bring life to things with with little more than a Meccano set and some speakers but fibereglass (or stone) dinosaurs are my real passion. They are beguiling, they sit somewhere between looking alive and looking like a hunk of plastic and even as an adult I’m wary of going up to one and touching it because I’m sure it’ll snap around and bite my arm off – even the herbivores.  They have their own style and feel to them.

And my favourite place to experience fibreglass dinosaurs in overgrown, neglected or derelict locations, nothing brings out the best in an already atmospheric setting like a derelict theme park or tourist attraction than plastic (or stone) dinosaurs. My perfect camping holiday would be in an abandoned dinosaur park, I wouldn’t want to leave. Paradise Wildlife Park’s dinotrain has just enough of that to it to make me like it, while not very overgrown, having these old models (seriously if they’re not 30 years old someone is knocking these out at 20 quid a pop from some ancient moulds they found when clearing out an old warehouse somewhere and if that’s true I really need their number) just strewn about around this out-of-date little train ride has the same ambience as walking around, I dunno, Bongoland or that Prehistoric Forest park in Michigan. And it has a Pot-Bellied T-Rex that you ride right underneath. Any ride that lets you look up the nose of such an iconic incorrect dinosaur as the Pot-Bellied T-Rex deserves a golf clap. 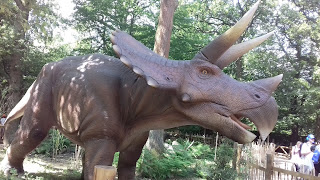 So World of Dinsoaurs is great, its 8 pound 50 per adult at the moment and this gets you entry into the dinosaur walkaround, the zoo itself, its little playground and neat little paddling pool lagoon area. You have to pay extra for the crazy golf and the train ride which is a bit cheeky really BUT for the people who care about quality they have an amazing walk-around area with some superb animatronics and for those looking for nostalgia, ironic fun or are just weird like me they have their train. Shit, the fact that they bought a model, any model, of a Baryonyx makes this place worthy of my praise, but one that moves? Hell yes - go here.