Examples of Crap I Waste My Money On: Bootsale Report 22!

I am desperate for something to occupy my mind, let’s talk about bootsale shit.
It was a cloudless, hot  morning with a cool breeze - which meant it was dusty as fuck but otherwise a pleasant environment to walk around in looking at other people’s old junk in – and the perfect environment to feel completely hopeless, worthless and suicidal in. Really: fuck nice weather when you’re miserable, it’s like nature is being a contrary cunt. Still if it wasn’t nice out I couldn’t have bought knock-off Ninja Turtles and polar bears1 so it was a necessary evil.
So anyway, are you sitting comfortably? Then I’ll begin. 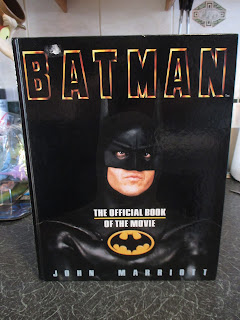 Batman: The Official Book of the Movie!
£1 ($1.32)
in case you didn’t know: Batman was BIG in 1989, Tim Burton’s film was a gothic monster that would not stop making money, Kenner’s tie-in toys became THE boy’s toy for Christmas 1989 (slowing Teenage Mutant Ninja Turtles world dominance for a while), the price of Action Comics 1 on the back market plummeted, The Incredible Hulk took up drinking: the Dark Knight was a big deal. So of course there was books of the film, but this is no story-book using stills from the movie (I’d’ve still bought it if was, but it isn’t), this is a full-on making of, they even dragged Bob Kane in to give a little interview about how created Batman, where he acknowledges his debt to Douglas Fairbanks Snr and credits The Shadow but somehow fails to acknowledge his debt to BILL FUCKING FINGER even when the man is brought up and Dick Sprang, Jerry Robinson and Sheldon Moldoff goes unmentioned at all, and this is a book that namechecks the Shield’s sidekick Dusty! Still, even if he is written off as just the writer it is good to see Finger mentioned at all during this period of Batman, y’know, the period when Bob Kane was alive and making sure no-one but him got the credit (no, really, he actually did that)2. Actually I’ve been reading this thing intermittently all day and can safely say that it’s a pretty awesome publication, an equivalent of DVD bonus features from the VHS age. Speaking of Batman: 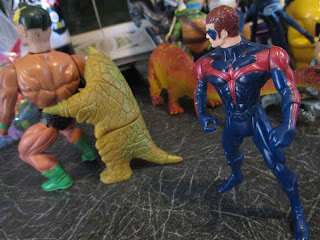 The Robin No-One Wants!
10p (13¢)
I have no need for a figure of Robin from Batman & Robin, however I found a Galaxy Warrior – The End of Time: The Last Battle and a Super Dino Monster in a box in this woman’s stall right at the end of the bootsale when I had no change. These are the little brothers to Galaxy Warriors and Super Dinosaurs, two of the greatest knock-off & bootleg lines of all time so I flat out had to be buying them but I felt bad giving her a note for what I figured would end up being about a £1 of stuff, so I scrabbled around in this shitty mostly empty box of half-broken McDonalds toys until I found at least something else to buy, deciding that using a note for £1.50 seemed better than using it for a quid. This Robin was my choice.
Then the woman charged me 10p each for the figures, which holy shit is a great deal but also completely defeated the point of everything I did and left me with a Robin figure that no-one up until then (the bootsale had been open about four hours by now) had wanted and I didn’t really want either. I’m not saying this because I think it’s an interesting story, nor because I want you to feel bad for me, I’m saying it so I can say the following; everyone who has ever run a stall and taken a note for a tiny amount of money without complaint and given the inconvenient bastard all your change: you are brilliant.
Speaking of hot women in very little: 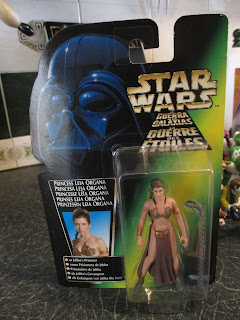 Slave Girl Leia!
£5 ($6.58)
Personal fact: I never fancied Leia, nor Carrie Fisher, until I stumbled on her shoot for Rolling Stone Magazine, this was in 1983 and so for the camera she frolicked in her Slave Girl outfit on the sand alongside an Ewok, a Gamorrean Guard and, um, Darth Vader. Wait, hold on, that means she did her Rolling Stone shoot with her dad!?! That’s weird even if he wasn’t the main villain. Anyway I couldn’t tell you why this particular thing did it for me when literal days worth of watching her in the original trilogy (and in that bikini) didn’t, maybe because she was having fun in the outfit rather than being a sex slave to a giant slug then brutally strangling said giant slug? I dunno but now I’m in the ‘I’d totally do Leia’ camp AND it was because of that bloody bikini, it’s just that - like everything else - I took the weird way to get there.
Fun fact: this was the first Slave Girl Leia figure made (the best one is easily the 7-inch Star Wars Unleashed one, how fitting).
A fiver is a damn good price for such a toy on card, of course it’s not on card now, because having Power of the Force II figures carded is in fact one of the surest signs that you're to be avoided at parties, even parties thrown by Star Wars nerds.
Speaking of giant worms that eat reality: 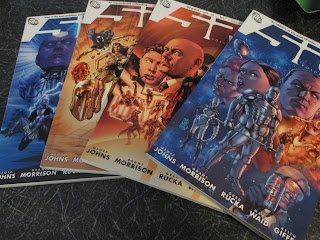 52!
£10 ($13.17)
Batman, Slave Girl Leia and now Graphic Novels! I feel like I should quote a Kevin Smith film and bag and board some Spawn issues.
And that joke has genuinely made me dislike myself. For context: there was a period (known as THE DARK TIMES™) in my teens when I was the worst, grossest, most stereotypical comic book nerd you can imagine, no – worse than that, and I have…association issues, if I feel I’m getting too close to how I was I tend to fall into a period of heavy self-loathing and deep depression, sometimes people die. Think I might be heading into one to those now.
Oh well, as least I can read the whole of 52 in four handy trade paperbacks that cost £2.50 each while I’m unable to leave the house, that’s a fine way to spend your time, trust me. If you don’t trust me: 52 was five of the best comic book writers around at the time teaming up to tell a story where everyone who wasn’t one of the core JLA members was flat-out no-denyin’ awesome, Booster Gold saves the world, Will Magnus (the bloke who built the Metal Men) is badass, Egg-Fu is a credible threat, Mr Mind achieves his butterfly form and EATS REALITY, Isis (from the old TV show?) makes the reader well up. These five clever little fuckers made one of the best DC Comics stories of all time and did it without Batman, Superman or Wonder Woman. It is epic.
Also, love how Lex Luthor looks just like Kevin Spacey on that cover there, that’s nice and dated and certainly something that won’t be happening nowadays (though mostly because everyone has forgotten that Superman Returns was ever a thing).
Speaking of dinosaurs: 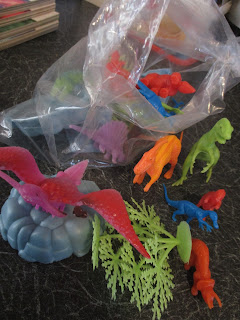 A Bag Full O’ Chinasaurs!
50p (66¢)
Yay! Something that doesn’t remind me of THE DARK TIMES™! Something that reminds me of happier times when I didn’t want to hide away from the world in shame and/or set fire to myself! And they’re neon now!
I’ve been very keen to find a bunch of these recent super-bright new releases of (pterosaur aside) the latter Chinasaurs (which are primarily based on/bootlegs from Marx’s old line) because, well, because they’re neon versions of toys I love! If they recast Ram Man and Man-At-Arms in ice-lolly green and day-glow orange I’d be on THEM like flies on shit too. I have now achieved this goal and could take a picture of and post a picture of very bright, very inaccurate, cult-favourite dinosaur toys.
So I did.
And I feel satisfied.
Oh, yeah, Chinasaurs are a fan nickname given to generic dinosaur toys made in, where else, China. Mostly the small, hard-plastic kind that have been around since the 1970s, the earliest and most popular models are original sculpts of the batshit variety, they were gradually replaced in bags and sets by the Marx knock-offs and the two dragons from Arco’s old The Sword & The Sorcerer line. All of the original models, bar Owlbear, can be seen here.

I’m done
Back to questioning my life and using everything, including this post, as reasons for why I should.
Thanks for reading my waffle, no go read 52, it’s infinitely better, it has Elongated Man.
Nite all.

1 the polar bear is bootlegged from a Golden Compass toy, although I bought it more because it looks like it’s made of Mr Whippy ice-cream.
2 in case you can’t be arsed to click that link, Bill Finger was co-creator of Batman with Bob Kane, while Sprang, Robinson and Moldoff were the ghost artists Bob Kane used to use because he was a lazy prick. Kane managed to get a contract stipulation with DC that Batman’s creation be solely credited to him as an unofficial thank you for grassing up Shuster & Siegel (co-creators of Superman) after they approached him about joining them in a lawsuit against DC.
Posted by dwitefry at 13:42

Email ThisBlogThis!Share to TwitterShare to FacebookShare to Pinterest
Labels: Bootsale Report, Comics, Examples of Crap I Waste My Money On, Star Wars, Toys