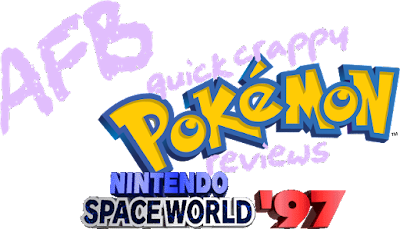 It’s the nail. That’s what’s been bugging me about Norowara, a Pokémon I should absolutely love, I mean it’s living voodoo doll and a voodoo doll mixed with a teddy bear, this is a clever way to do the teddy bear thing, way more creative than Teddyursa or Snufful, this feels creative. But that nail, it makes the whole thing…well…here’s what Bogleech had to say about Kyonpan:

“This, too, only barely looks like a Pokémon design, then or now. It looks more like the kind of critter you might see on the cover of a bootlegged, knockoff Pokémon mod”

That hits then nail right on the head (I’m sorry) both of these feel like they should be on the box on some really dodgy Monstermon bootleg, something really pointless like a can of fizzy drink or a packet of bubblegum or something. Designed by someone who gets the idea of Pokémon – animals mixed with other things – but doesn’t have a fraction of the creativity or skill of Game Freak. Now while I like Bootlegs and knock-offs it’s just… a Jiang-shi Panda – that’s a hopping ghost vampire panda by the way – is fun but… the team could do better, they DID do better:

However these did sound like they had an interesting gimmick, a kind of reverse Gyarados in a way, Norowara would evolve early (Level 2) but keeping it unevolved would seemingly be as beneficial if not more so, it would learn Curse at level 99 which would imply that keeping it and getting it that high would have seriously paid off.
I think I might have just pulled these scores out of my ass, because...I just don't know with these two.

NO!
Bad Game Freak!
Bad! Look what you did!
You took away our Werewolf Pokémon!
You go and sit in the corner and think about what you’ve done! The corner with the werewolves in it! So they can maul you!
These two are just fucking brilliant and the worst losses of the lot, look at them, see what they are? They’re not little Mankey-like versions of werewolves, they’re creatures wearing Mankey-like versions of werewolves. Their mouths feature eyes. They’re either waring the dead skin of another type of Pokémon (which is doubtful but not totally unlikely, I refer you to exhibit A: Cubone) or Pokémon with a false face (which I feel is more likely, this is the generation that had this going a lot, see the beta spiders and manta ray) and either way I love it because either way that is such a great way to do a Pokémon werewolf! Especially as – if you now your history of the development of the werewolf myth AND WHY WOULDN’T YOU – you’ll know that wearing the pelt of a wolf was one of the more established ways to become werewolf in the days before Universal Studios. Actually on that, keeping these two would have also meant that by now I’d be able to have an awesome Universal Monsters team:

That’s Dracula, Frankenstein’s Monster, The Wolf Man, The Mummy, The Invisible Man and The Creature from the Black Lagoon for the people who can’t automatically make connections between Pokémon and old black and white movies.
There was no reason to dump these two, we always need more Ice ‘mons, we always need werewolves, these are a great concept executed with an appealing design that fits perfectly into the style of ’mons we had up to this point.
I’m cross now, I know! I’ll cheer myself up by making up another Pokémon team. Oooh! Oooh! I know!

It’s the Marvel Family! See? Zapdos is Captain Marvel, the Pikas are Mary and Junior (Captain Marvel Junior’s costume was said to have inspired Elvis’ you see), Zeraora is Black Adam, Bunnelby is Hoppy and Thundurus is Shazam!
I need a life.

Wait, is that the last one? Oh. OK, off to the round-up then!

Man, there was a lot of lower scoring ‘mons in this demo, but I suppose that makes sense right? They’re still in development after all.

Ooh! Jumpluff made this category both times! Good for Jumpluff! You are cute no matter what form (or forme) you take!

Most Superior to Their Final Design

They had Girafarig perfected then they changed it and now it makes no sense!

Most Inferior to Their Final Design

This was an attempt at being unbiased, you’ll notice no Dynabea

I’m sorry! I just want to make Sui’s life better, it’s whole design makes me want to take it home and show it how valuable it is to the world! Also I do really want to own those big fibreglass things on fairground rides, in fact I want to own most things from fairground rides – vehicles, lights, signs, decorations and indeed big fibreglass animals like, say, ladybirds.

There, I will never talk about the Space World ’97 Demo of Gold & Silver ever again on this blog. I promise. AND now we can move on to Generation III and I can only apologise in advance.