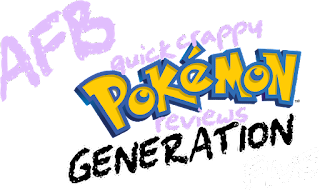 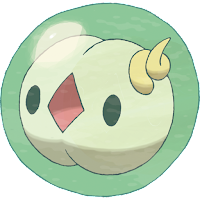 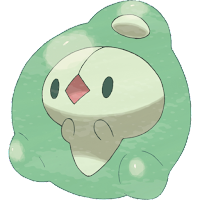 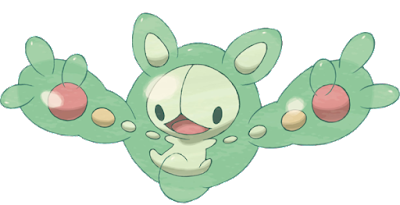 If you want a good reason why I still insist that Pokémon is superior to Digimon even though the former has flat out nicked ideas (Megas, say) from the latter and the latter has a way better anime then I have one for you right here and it’s completely on-topic: when Digimon go as simple as Solosis it’s to create their Fresh Digimon, which are primarily little more than extremely simple little blobs with ears or a tail (or sometimes both) and are rarely close to creative or smart, they’re just as simple a design as you can get. When Pokémon go as simple to create a ‘mon that’s just a circle with a face it's a little something else; it’s an egg cell in the start of an evolutionary line that’s based on cellular mitosis and embryosis, like Voltorb  before it, Solosis proves that even when they just draw a circle and put some eyes on it, Game Freak can’t help but be clever. It’s a huge step up form a smiley with rabbit ears and a step up that is on display throughout most of Pokémon’s ‘mons when compared to Digimon’s 'mons.
Away from pointless fandom rivalry (and again I do like Digimon, Digimon Tamers is legit one of my favourite anime and Digimon Adventure tri. has been gorgeous) this line is a good line, an entire line of ‘mons based on cellular mitosis, an entire line of strange foetus-like creatures surrounded in protective matter that grow additional brains so they ultimately look like floating bunny fruits in Jell-O AND split cells? That’s just neat and this was Generation V’s equivalent line for Abra! (funnily enough Uri Geller didn’t sue over these). I wish all of the eqvuivalentmons were like this, clearly standing in for an older line but also clearly doing their own thing.
Quick observation; the name ‘Reunclius’ (for the third stage, the awesome aforementioned bunny trifle fruit cell) really doesn’t feel like it goes with the names ‘Solosis’ and ‘Duosion’, which both really do feel like they go together. As I’ve said I’m not marking down ‘mons based on their English names because they’re tacked on later, rarely a factor in their design and of course only relevant in English speaking countries but it’s just something I’ve always thought and what better time to get it off my chest than now? 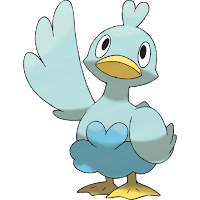 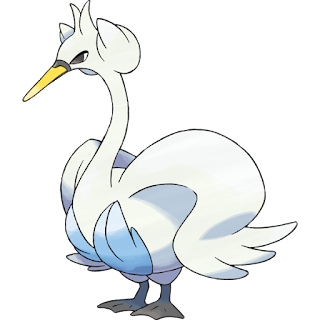 Dear Game Freak, no, dear Japan, boob coverings are not that funny! Get laid for fuck’s sake, you seem like a bunch of 12-year-olds sniggering in the bogs! Bras, bikinis, whatever, they’re mildly tittersome when worn on heads but they are not the comedy gold you seem to think they are and they’re certainly not a joke that’s worth telling twice on two different Pokémon. We already had THAT FUCKING SEASHELL BIKINI on Gorebyss, that was enough, but no, Japan thinks tit support is hilarious so we get that unnecessary and awkward feather brassiere on Swanna. I think I find it slightly less offensive than Gorbyss though, they’re a lot less incongruous - feathers on a feathered animal rather than two seashells stuck onto an eel, THAT FUCKING SEASHELL BIKINI can only be a gag, Swanna’s could possibly grow like that. I like the head shape though; they could have just gone simple and smooth but instead gave Swanna a unique look.
Ducklett’s just fine, I do think that his ‘feather nappy’ would have been better in white: 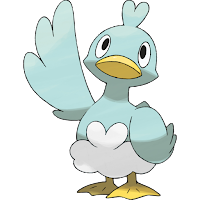 Not to make it look more like a nappy, just cos I think it looks nicer. 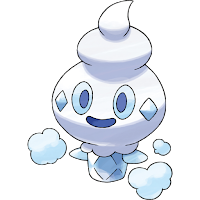 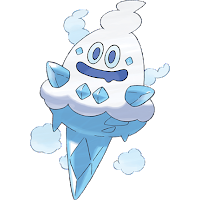 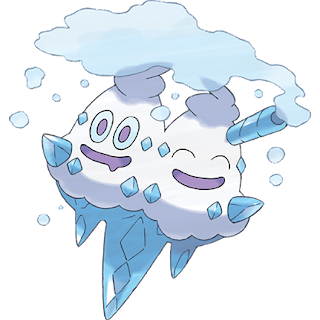 SQUEEEE! It’s here! Another line that, upon seeing it I loved it immediately and was shocked and appalled that most of the fandom had different opinions to me. It all just made so much sense for an Ice Type ‘mon – a little tub of ice-cream evolves into an ice-cream cone and then into a double cone, it’s just so…sensible, built on and working from previous things like Magnemite and Magneton, Exeggcute and Exeggutor and even Oddish.
And what an execution of the idea, making the ‘cones’ be ‘icicles’ is just genius but that’s not what I mean, and I mean they’re super-adorable but that’s not what I mean either, what I mean is that no matter how Poketubers want to simplify things to make their point these three AREN’T just ice cream cones with faces on them, like say Klink, these aren’t inanimate objects with faces drawn on them but clearly ice creatures whose anatomical features approximate ice-cream tubs and cones – including the genius icicle cones. I suppose the flake could be considered a little less so but Bogleech found at least two examples of real-world anatomy with similar concepts (cephalopod siphon or defensive gland) so I’m counting it. I was pleased with these then and I’m so pleased with them now.
Oh, and as I just took a pop at it, yes Vanillish DOES look like it has a bikini on, but comparing it to Vanilluxe (which doesn’t despite being pretty much just two Vanillish stuck together) this doesn’t seem to be intentional like it is with Swanna and Gorebyss, but just a pattern that ended up a little unfortunately placed. 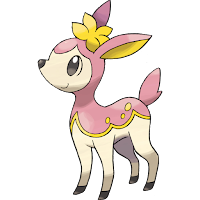 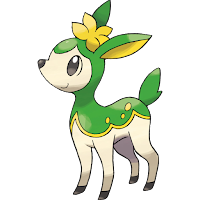 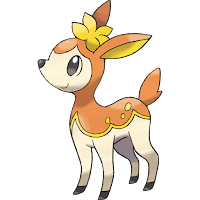 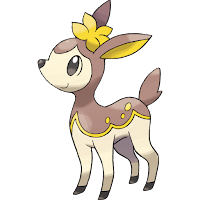 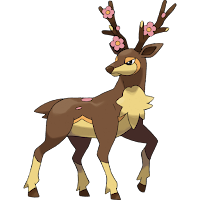 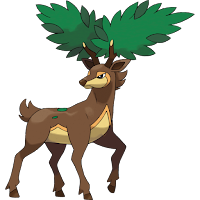 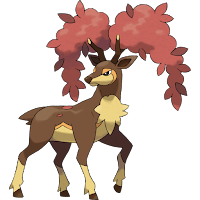 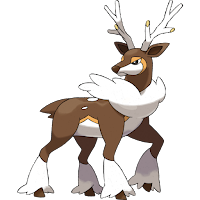 Formes! Bloody formes! Because of bloody formes this isn’t a review of two Pokémon but eight! Deerling and Sawsbuck both have four formes each that change with the newly introduced seasons mechanic, Gen 5 would have seasons and some areas would change depending on what season it was, as would Deerling and Sawsbuck. Vanillite and Trubbish are not Gimmick Pokémon! THESE are Gimmick Pokémon! and just like all the Gimmick Pokémon that are used to show off a new game mechanic I’m completely ok with them! The Formes are nout but aesthetic changes (these stay Normal/Grass) which do make it all for its own sake but at least they don’t require me to think any more than any other Pokémon.
It also helps that 3 of the four Sawsbuck formes look gorgeous, they look so nice that they almost make me forget that Pokémon have done this life-cycle of a plant thing god knows how many times already. Still they’ve never done it with formes I guess and taken in isolation the concept is completely sensible – the life-cycle of a tree in the form of horns – and it’s done really well, ever noticed that Sawsbuck’s chest hair depletes during it’s Spring forme so that it’s cooler in summer, then it comes back in it’s Autumn form so it’s warmer and both of these things make it look like the extra fur it has for it’s Winter forme is lessening then re-growing? Being a miserable git and yet paradoxically a completely Christmas fanatic I like the Winter forme best, it just looks so Christmassy and pretty, probably because it’s horns look like an actual type of Christmas decoration? I imagine that when it walks it naturally makes the opening from Sleigh Ride.
The one I don’t like that much is the Spring Forme, I get it, but it’s horns just look a little laughable with just a few flowers dotted over it, the other two I think are perfectly fine, both of those antlers look so niiiiice.
Oh, well Deerling just changes colour, huh, I could have sworn its head flower changed too. Nope. Well I feel bad for that shouting now. Well…um… well all four colours make complete sense and match up nicely with Sawsbuck’s forms, I think I like Winter forme the least this time though, as while again brown makes complete sense (the colour of bare branches and dead plants) it does make Deerling just look like a regular cartoon deer someone put a flower on. Spring forme and Autumn forme just look really edible and Summer forme just looks a lot like Cassia from Sonic:

HOWEVER, unlike Snively, who debuted long before Pokémon Black & White, Cassia and Clove debuted a good while afterwards (they were created for the rebooted Archie comic), they were created by Aleah Baker and while animal + colour is Sonic’s thang and it could be a coincidence…nah mate, come on Aleah, admit it, there’s no shame in it, ripping off Pokémon is basically an industry and it’s not like it makes Cassia any less UTTERLY AWESOME. 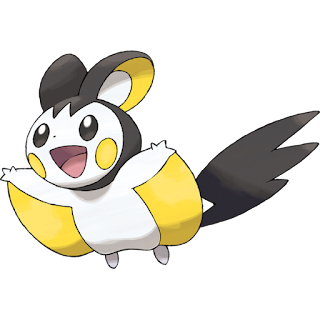 I think Emogla’s my favourite Pikaclone, do you want to know why? It’s not because Emoglas are little shits to fight, fast little fuckers that have the paralysing Static ability (so you’re paralysed if you used a physical attack on it), that aren’t weak to Electric Type (because they ARE part Electric Type, Electric/Flying to be precise) my go-to for Flying Types and a type I always have on my team and (Gym Leader) Elesa has TWO of them - it’s because they’re so cute and fly in a way that always looks like they’re about to hug you. Hugs are a great way to get ‘round me. It does nothing wrong design-wise and gives us a nice twist on Pikachu – Flyachu – and if you use Elesa’s Volt Switch tactic it can be pretty handy despite its weakish stats but it’s mostly the cuteness and hugging, no, really.