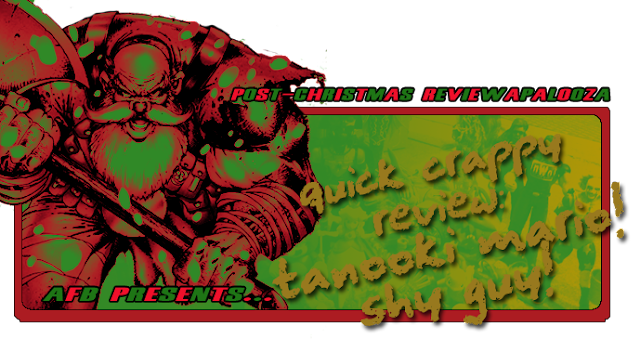 No I will not make any jokes about fur suiters! Fur suiters are alright with me! 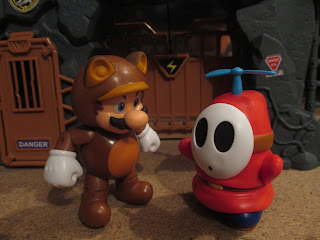 My lack of JAKKS Pacific’s World of Nintendo action figures has been less to do with any personal dislike of the line (there isn’t any) and more to do with how little of them I’ve encountered – I still haven’t seen a life-size Metroid, nor a deluxe Donkey Kong or the 8-bit figures and most toy-stores seem to stock only Mario and forty-million Toads in this scale, oh and Yoshi, lots of bloody Yoshi. I’ve been guessing I’m just being beaten to the punch by the more hardcore Nintendo and toy collectors and they’re gobbling up all the Zelda and Pikmin releases but it seems that distribution is not this line’s strong suit. Then mum bought me Tanooki Mario and Shy Guy for Christmas. She loves Mario, I love Mario, and we both like it when Mario gets one of his little outfits so there’s a great bit of theming going there, I didn’t know she even knew what a Shy Guy was so presume she just bought it because it was next to the Mario figure. 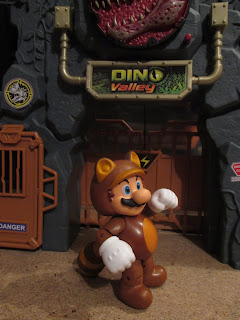 Both figures are from Series 1-4 of World of Nintendo and are from the Super Mario franchise (I’m guessing someone needs telling this). Tanooki Mario is one of Mario’s powered-up forms and debuted in Super Mario Bros. 3 for the Nintendo Entertainment System or NES (or Famicom) which is the best Mario game ever; if you disagree you are wrong and should feel very ashamed of your terrible taste in everything. Tanooki Mario is pretty much just a suped up version of Raccoon Mario, giving Mario a full outfit rather than just a tail and ears and allowing him to turn into a statue and fool enemies as well as using his tail to fly over them and knock them out. This look though is based on the more modern version of Mario and the Suit (and leaf) from the Super Mario 3D series, that’s my major complaint about World of Nintendo in general, all of the characters are appearing in their modern style, I like this style and I really like this figure but I think I’d really like it a little more if it was in the style and proportions of the Super Mario 3 manual art, but then I’m an old codger who clearly has a big thing for Super Mario 3 and these toys are aimed at kids who only know the Wii/Wii-U and 3DS and are reading this mentally correcting me that the statue power comes from a different power up duh, well they would if they were reading this and not looking at porn. 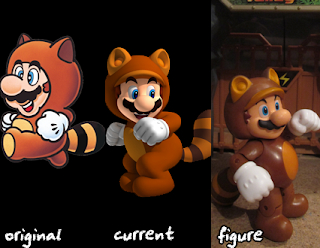 I have this thought that this is the first action figure of Tanooki Mario period but if it isn’t it’s the first one that I’ve owned and I think it’s brilliant, putting my review hat (suit) on though there are a couple of negatives: 1) he has no wrist articulation, in fact no World of Nintendo Figure I own has wrist articulation and that’s just weird, especially on Mario and Luigi who have an obvious place for one, Mario does make up for it a little by having a ball jointed tail, which is just what I wanted in that regard, not he doesn't, I got that wrong. But it’s still an odd choice. 2) his paint apps are shit, whoever painted this really never wad down with learning all that ‘staying in the lines’ shit, I don’t think as single application matches up with the sculpted line, the peak of his ‘hood’ is the worst (and the only one that’s really noticeable from a distance) and his tail probably the best with his stomach marking coming in somewhere between the two. I will overlook this because the sculpt is so perfect I’ve looked quickly at even my quick crappy pictures and thought they were official 3D renders, I hate the phrase ‘stepped right off the screen’ because it’s overused and I’m weird but by god he does look like he’s just jumped (double jumped?) straight off a level from Super Mario 3D World. He’s really round too, that may sound like a stupid thing to say but, look at him, he’s really round and he feels great, you know what he feels like (and looks like)? Those Lindt Lindor balls when they’re straight out of the fridge. 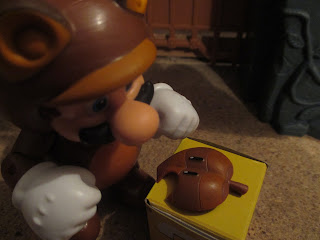 Each figure in the 4” scale come with a ‘mystery accessory’ packaged in a little cardboard replica of a power-up box, in the case of these two that’s the Mario series’ iconic yellow question mark box. This line is, I believe, being overseen by Scott Neitlich, former Brand Manager and ‘face’ of Masters of the Universe Classics and you can tell, only he would think it was a good idea to try and make something as standard as an accessory a special event and fail at it so badly The accessories are not randomly packed (to my knowledge) so there’s no surprise at all and a Mario fan could pretty easily work out what will be in the box. In Tanooki Mario’s case he comes with a Super Leaf, the power-up required to turn him into this form. It’s as good a realisation of it as the mystery accessory idea is a failure, it’s also so adorable!  Mario however cannot hold it, this makes sense in cannon as holding it would put him in an endless loop of receiving the power up so I’m letting it go but it does mean this easily broken and easily lost little guy is going to get easily broken and easily lost by a lot of the target audience. I’ve kept one of the cardboard question mark boxes to keep it in, it’s practical and it helps hide that I’m too cheap to buy the Figuarts Mario scenery packs (yet). 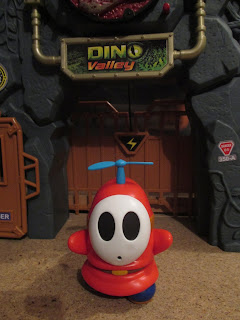 Shy Guys are one of a bunch of Mario villains (including Snifits, Bomb-ombs, Birdo and Pokeys) originally created for Yume Kōjō: Doki Doki Panic for the Famicom Disk System that tied into Fuiji Television’s media expo Yume Kōjō. This game was edited and released in the West as Super Mario Bros 2 after the Japanese game Super Mario Bros 2 (known as The Lost Levels over here) was deemed unsuitable, as Doki Doki Panic was produced by Mario creator Shengu Miyamoto1 and Nintendo retained ownership of everything but the playable characters it wasn’t much of an issue. Shy Guys were originally part of a group called the 8 bits who all came from the dream world Subcon2 where they were the most common enemies, but since then they’ve just become another of Bowser’s many types of cannon fodder acting as a half-step up from Goombas. Shy and nervous they’re just too cute. 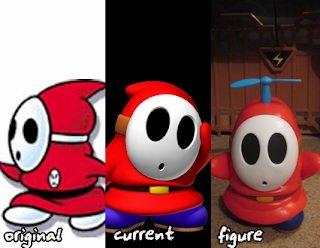 I had no idea that mum could recognise a Shy Guy by sight, recognise it as being from Mario and then remember it was one of my favoured Mario characters, but apparently I was wrong. I am very glad about this but it’s kinda hard to review him (are they hims?), he has four articulation points – swivels at the ‘ankles’ and ‘shoulders’ and well, that’s all he needs, I could have gone for some ball joints at the shoulders but I can hardly fault JAKKS for not putting them in, imagine what your thought process would be if you were given a design like a Shy Guy and told ‘make an articulated figure out this thing with barely any limbs and no face’. A waist articulation point maybe? But, well, do they have waists? I dunno the anatomy of a Shy Guy and I’ve played Mario games since I was four. So (s)he’s a big lump of plastic but (sh)he’s a charismatic one, again the sculptor(s) need all the praise because this thing looks just like a modern Shy Guy, don’t you want to hug him? Paint apps are also a lot better than Mario’s too and the bottom half of his big shirt is nice and soft and allows his feet a good turning circle as well as just feeling like it should, I don’t like it so much when what’s supposed to be fabric feels like hard plastic, I like it a little supple just to satisfy my OCD. 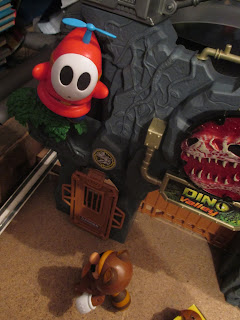 The ‘mystery accessory’ horseshit fails even harder with Shy Guy as it had a slot for its propeller clearly visible on its head and clearly visible when packaged. Look I know this is the man who really thought we’d believe that accidentally swapped parts were an aesthetical choice and that there was there was no regional lock-out when we were using software to prove there was regional lock-out when the regional lock-out was happening but this mystery accessory thing really does insult my intelligence, if they were randomly packed then yes, it would be fine; though frustrating for some I’m sure, I would love to have opened Shy Guy’s power-up box and found a surprise Poison Mushroom or Starman but no, it was the propeller I knew it would be because the items aren’t randomly inserted and I could see the hole the propeller went in while the toy was still in the box! Anyway the propeller slots in easily and stays in nice and firm, turning the Shy Guy into a Fly Guy (so technically you won’t see a Shy Guy pictured in this review). Brilliant choice of accessory, it does leave your regular Shy Guy with a little plug indent that makes him look like he’s been hit with a tiny cartoon hammer, but only if seen from above. 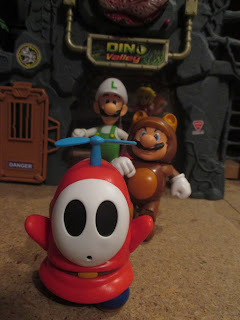 Concluding paragraph? Great toys and a great present, they are mass produced retail figures so I can’t get too annoyed over Mario’s paint-app problems (large as they are) what I can get annoyed about is the stupid mystery accessory concept though, so I will, it’s not quite as irritating as the Chase Figure concept from Masters of the Universe Classics but it is pretty crappily executed. Now JAKK's Pacific, you need to get reusing parts and repainting – I want a White Tanooki Mario with Super Leaf, a Raccoon Mario, a Snifit and a Beezo please!

1 In fact he was MORE involved with Doki Doki Panic than he was with The Lost Levels.
2 Yume Kōjō roughly translates to Dream Factory, hence why the whole game is set in a literal dream world.
Posted by dwitefry at 09:39