A Tribute To... Ocean Warriors!*

Street Sharks are easily in my top five action figures, I’m pleased to see them developing the cult following such good quality toys deserve, but of course we’re not here to talk about those, nah, we’re here to talk about 3” knock-offs frankensteined from their parts. Meet the Ocean Warriors: The Warriors Powered by Ocean: 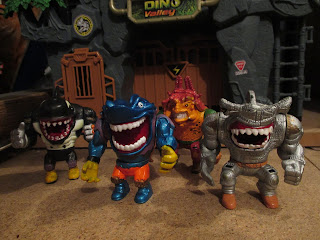 Figurerealm.com dates these as coming from 2000, I personally think that’s a little late – Street Sharks lasted for a  surprisingly long time, around three years and six waves of figures but their time was well and truly over by 1998, let alone 2000, so I can’t see anyone bothering to release knock-offs of them that late in the day, however as these are made from parts from the third and fourth waves of Street Sharks they must have come out fairly late in the day, I’d put them around 1997 personally but officially the only date we have for them that isn’t from the mind of some shitty blogger is 2000. You’ll also see them commonly referred to as Mannix figures, this is…complicated – the company name Mannix was only used for one line – IWC International Wrestling Champions – but this line introduced a body mould that was used for several other lines (Two Face Monster, Monster Maniacs, Apes Attacks etc) that were put out under other company names, exactly how all these lines connect is something of a mystery still being unravelled, regardless the company name Action is on the Ocean Warrior cards. Also I will mention that each of these figures came with guns, mine don’t have these weapons because I bought them loose and as the Street Sharks don’t have signature weapons (and the original toys didn’t come with any accessories) I wasn’t bothered, you can see their guns on card art below though. 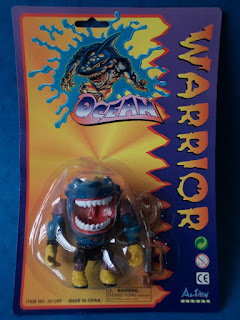 The card art also shows off nicely that none of these characters have names, that is common for Mannix related figures and I refer to them by the names of their official figure counterparts but that isn’t going to work here so, um, let’s call them Bob, Chuck, Dave and…um… Ralph. 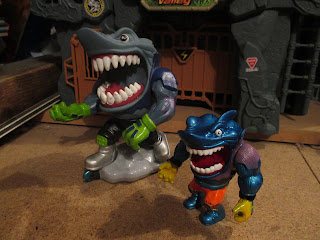 Streex
Fun fact, Streex wasn’t called Streex in the toyline until his third figure; previously he’d gone under the name ‘Blades’. Bob from Ocean Warriors is literally half Streex and half Blades, his upper half is a shrunken down version of Streex (having examined these figures I’m leaning towards these being moulded from the original toys then shrunken and modified, everything’s just too well placed to be copied) while his lower half is from Blades and paint job from the series 2 version of Blades. I greatly enjoy this about these figures, I think I just get enjoyment of recognising things - I’m the sort of person who likes to go through huge group shots in comics and name all the characters – so maybe it’s more just because I’m cripplingly sad but whatever it may be, I enjoy ‘kit-bashed’ figures, part reuse and repaints, I like how you can transform and disguise thing simply by changing their colour and y’know I just think it’s fun to see character in ridiculous colour schemes. Something amused me (and we’re back to being crippling sad here) is that Bob has Streex’s muscles painted as if they’re part of his top, I like it when this sort of thing happens to, when one thing is used to represent another, either intentionally or in this case, completely unintentionally (Toy Biz did this with characters heads, Polaris for instance, is Rogue’s head). 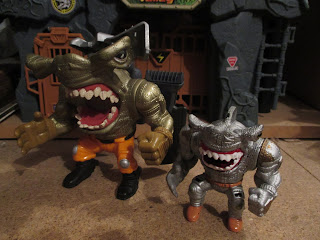 Jet Pack Jab
The least modified Ocean Warrior, Chuck is just a shrunken down version of Jet Pack Jab from the fourth series of Street Shark toys. Happily Jet Pack Jab was my favourite Street Sharks figure as a child so I’m good with this – Jab was always my preferred 'Shark because he was just Raphael but a shark, but then Mattel seemingly merged him with a fighter plane turning him into a bronze flying metal hammerhead shark with a fucking jet pack. ‘Action’ have managed to differentiate Chuck form his inspiration by… removing the rivets from Jet Pack Jab’s teeth and putting them on his gloves, and taking off the numbers from his fin and shoulders, and you know what I bet legally speaking that is actually enough, also he’s a different colour and you know I’d love a proper Jet Pack Jab in silver, however Action’s paint job does remove some of the inexplicable weirdness that makes JPJ so appealing to me, the Mattel colours imply that somehow Jab now has metal for skin and is wearing trousers, Chuck is far more likely either a robot or wearing armour, it’s kind of weird when the bootleg makes more sense. 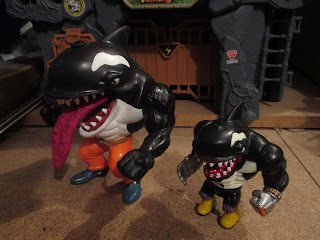 Moby Lick
I have done studies and these studies show that literally every boy in the UK owned a Moby Lick, he’s easily the ‘Shark (well Orca) I see the most being sold second hand and he was in the house of every kid I knew at school, either 90’s kids loved Killer Whales and I never knew or he was the figure most commonly found at a discounted price. Moby Lick, whose name is such a bad pun you’d think he belonged in He-Man, was a construction worker who was turned into a killer whale with a huge tongue – I love cartoons. ‘Action’ wisely removed the trademarkable tongue and then just made the rest of him from bits from Chuck and Bob, thus while Dave looks the most like his Street Sharks counterpart at first glance, he’s actually pretty damn different, firstly no attempt was made to follow his colour scheme beyond his face and no other Moby Lick parts were stolen, using Blades bottom half and Jet Pack Jab’s arms instead and can we just taken a minute to appreciate how cool a Killer Whale Man with metal arms is please? …
…
…
Thank you. The colours scheme’s odd by the way, making him look like he’s wearing ski boots, a really expensive watch and no trousers. 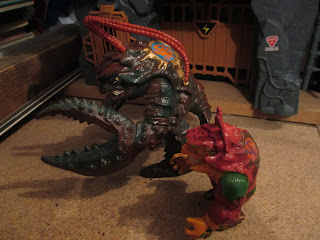 Slobster
The earliest Street Sharks toy to be stolen from (well with Blade's bottom half), and the most modified – the other Ocean Warriors seem to clearly have been moulded from Street Sharks ‘Action’ bought at a local Toys 'R' Us but Ralph seems to have had his whole face and chest remodelled, his face is wider and he’s grown some abs, his antennae have also been shortened, presumably so they could be made on the same tool as the rest of the body, in fact I’d go so far as to say that it’s an entirely newly sculpted piece and so with the rest of the figure being taken from other figures who aren’t Slobster this is easily the most unique looking Ocean Warrior. Of course with Ralph getting arms taken from Streex and a lower half from Jet Pack Jab he’s still 75 percent stolen, but he has a completely original paint job. Actually, on being different, Ralph is the only figure that feels the same as his ‘inspiration’, one of the many good things about Street Sharks figures is that they had ‘shark-like skin’, a rubber layer, over their body so they all feel slightly squishy, however the villains didn’t have this feature (nor did Mantaman or Radical Bends) so Slobster and Ralph feel the same, the biggest difference in feel, if you care, is Moby Lick & Dave, because Moby has no ‘chomping’ action feature and thus lacks hard plastic in his jaws and is thus far more squishy (and I got to use thus twice in one sentence!).

Though not exactly cheap these are easily the easiest (bad English?) Street Sharks bootlegs to find. Yes there are multiple Street Sharks bootlegs, for a good laugh check out the ‘Mannix’ Mighty Sharks, which just cut out Street Sharks heads and stick them on the Mannix body, which is kind of a mix of vintage Masters of the Universe and Hasbro’s WWF. I also find Ocean Warriors to be the best Street Sharks knock-offs, Mattel didn’t repaint these four figures, nor did they produce ‘Sharks in many scales (there was a 10” Ripster and a couple of riders for Hot Wheels Smash N Crash bikes) so Ocean Warriors actually manages to fill a hole left by the official line, which is where the best bootleg lines shine – i.e. Galaxy Fighters bringing in styles of He-man characters that Mattel never produced (werewolf, Spartan, dinosaur, Viking…). And I’m done, thanks for reading about action figures that flaunt copyright laws about as much as action figures possibly can, and sorry it wasn’t very funny, I’m just not a very funny mood today.
Posted by dwitefry at 12:44

Email ThisBlogThis!Share to TwitterShare to FacebookShare to Pinterest
Labels: A Tribute To, Toys