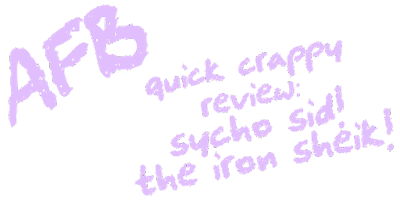 So Smyths Toys had a sort of semi-unofficial Easter sale on when I popped into their Lakeside branch after spending three hours in Ikea, which was nice as it allowed me to catch up some on Playmates TMNT and Mattel WWE without breaking the bank, or having to build it afterwards with instructions in Swedish. Marked down were Sycho Sid, who I’ll be calling just Sid from now on because it doesn’t make my spellcheck cry, which was no surprise as he’s been group peg warming since before Christmas and SHEIKY BABY. 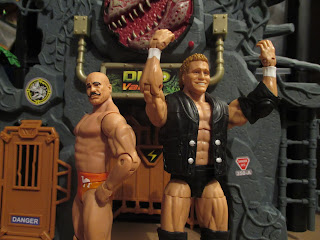 Sycho Sid came out in wave 39 of Mattel’s WWE Elite, their ‘mid-price’ range of WWF figures that were once their ‘top end’ range (but aren’t now that Defining Moments exists) while The Iron Sheik is from WWE series 59, WWE being the most basic of Mattel WWF figures. Neither are exactly new, Elite Series 39 hit the UK shops just before Christmas 2015 and we’re just getting WWE Series 60. 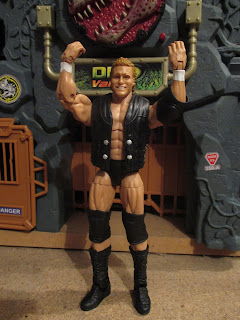 Sid Eudy spend most of the 1990s bouncing between ‘the big two’ using various monikers, at WCW he was usually Sid Vicious and a heel, a member of the legendary Four Horsemen stable and a man who once got fired from the company for stabbing Arn Arnderson repeatedly with scissors in a hotel corridor. In WWF he was first Sid Justice (which is what his Hasbro figure was released under) as a face and then, after being sacked because several WCW wrestlers threatened to walk out on the company because of him stabbing a legendary wrestler with arts and crafts tools, he was Sycho Sid and first began using the look he has in this figure, which is very much considered his ‘iconic look’ it seems. Fun fact, between stints in the WWF in 1996 Eudy was actually retired and working a normal job, having given up on wrestling due to an injury and backstage issues with the notorious Kliq1, Vince McMahon had to coax him back into the industry after The Ultimate Warrior stormed out of a current contract over a copyright argument, McMahon needed someone with similar star power to Warrior for an upcoming show or else he feared he’d have to refund his audience (Warrior already being advertised as appearing). Fun Fact number 2 – Sid Eudy is a mad person who became famous later in this career for completely illegible promos. I’m a bit of a fan of ol’ Sid, he was Sid Justice when I was a kid and in my mind he’s just such the quintessential wrestler, the way he looks, the way he behaves, the way he wrestles, it’s exactly how I imagine a wrestler, also he’s mad as a box of frogs and I appreciate that. 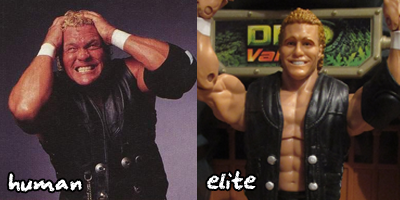 So this is Sid’s first time in WWE Elite and before I start complaining – damn the sculptors got his hair down, Eudy’s hair used to look like a cross between a sheep’s arse and scrambled eggs and fuck me if that isn’t exactly what this toy’s head looks like. They’ve also done a really good job with his outfit, his knee-pads and jacket especially, I’ve wanted Sid’s jacket for a while now and this toy isn’t helping. Now the complaining: because he has some ugly parts – the muscle definition on this thighs and arms, Christ, this is some fucking Hasbro superhero level ugly, and because this an Elite figure - the thigh cuts are back, which just make those thigh pieces even uglier the second you use the artic, this is possibly the most glaring example of the thigh cut's issues because this time his muscles don't line up, god this articulation point sucks. HOWEVER the muscle definition is not exactly inaccurate to how Sid Vicious was in his heyday, so maybe it’s just because I’ve had to look at this level of definition on completely inappropriate characters like Spider-Man, Daredevil and Captain America all these years that I now hate it no matter where it shows it up... no, actually that’s exactly it, that's one of the reasons why the word 'crappy' is in these reviews. The ab crunch though it nicely hidden by the jacket, that's one of the reasons why overlay pieces can be good. Then there’s the face… it’s not a bad likeness but the expression…*sigh* I dunno, I get what they were going for, playing up the sycho in Sycho Sid, but it really doesn’t make him look very menacing, it kind of makes it look like someone’s dropped a fart and he finds it funny yet smelly. Sometimes I like it sometimes I don’t; my opinion’s changed about 10 times during this paragraph alone, I think I may never settle on one. The package has the cheek of labelling his vest as an accessory and he’s packaged without it, it was a tight fit and I had to pose his right arm in ways no living being could achieve but I wasn’t too scared about it snapping off. 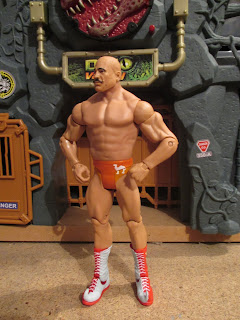 Then there’s the Iron Sheik, played by Hossein Khosrow Ali Vaziri (a genuine Iranian-American) and a genuine legend in the American Pro Wrestling world. The height of the Sheiky baby’s career came before Hulkamania so he’s perhaps not quite as well-known as he should be, he joined the WWF in 1979 but only for a year, though in that time he managed to win the first-ever Battle Royal in Madison Square Garden. When he came back to the promotion it was being run by Vince McMahon Jr who was breaking all the rules to benefit himself and Iron Shiek as instrumental in McMahon’s ascent by being the man to dethrone Bob Backlund so the title could be switched to Hulk Hogan, Backlund had been WWF champion since 1978 (officially) and when Hogan hit the leg drop on the Sheik it was the start of Hulkamania and the beginning on WWF’s good fortunes. Sheik was in a tag tem match at the first Wrestlemania with Nikolai Volkoff but other than a very stupid stint in WWF as Colonel Mustafa and winning the 2001 Gimmick Battle Royal at Wrestlemania X-Seven he mostly stuck to the independents, retiring when he was 60. 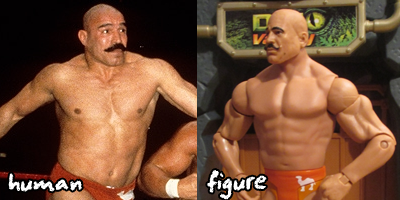 I love the Iron Sheik and I love this figure of him, though I tend to think of him in the outfit used for LJN Wrestling Superstars figure and not his, um, skimpier ring attire used here this is the Sheik in his prime and he has THE BEST facial expression going on; he looks slightly puzzled at why you’d be so stupid as to challenge him, look at him, he’s saying “bitch, please, I’m in the fucking Iron Sheik” or more likely “you no chant USA, hatooey”, whichever. Likeness wise…he’s in better shape than I think he ever was, certainly when with the WWF and, this is such a strange thing to say, but his eyes are a little bit too open for how I usually picture him, but that’s usually because I picture him pissed off and saying anti-American things on television, also I think this figure is of a slightly younger Sheik than I’m used to. Other than I love that they spent the money to give him his curly toed wrestling boots I’m a bit short of things to say, Iron Sheik or not it’s still a figure of a man in his pants and that doesn’t give me a lot to review, nearly all the pieces are reused too and there’s no deviation from the standard ‘basic’ Mattel WWE articulation (mine has very stiff ankles),  the only issue there is that he can’t open his legs wide enough to do the Camel Clutch, but visually he really benefits from the lack of ab crunch (check out my comparison pic and you’ll see what I mean about Sheik’s torso in real life, it’s very…smooth and flowing and any articulation lines would really stop it from looking accurate I reckon) also - nipples Mattel, nipples, men have them, you don't have to paint them in, you don't have to spend the money on the paint apps, but they really do need to exist in a toyline full of men in their pants. So while I think this figure’s great I don’t have much more than that to say – other than I’d really like an Iron Sheik that came in blue with a removable headdress and his clubs please Mattel, maybe you could look into doing accessory packs? Y’know chairs, Spanish announcer tables, guitars, beer, and more specific things like Sheik’s clubs, Bret’s sunglasses, Mr Socko, that sort of thing.

In conclusion, I’d’ve paid full price for the Iron Sheik but I’m glad I didn’t have to for Sid, I think that sums up my opinions on them both nicely.

1 a group of friends made up of Diesel (Kevin Nash), Triple H, Razor Ramon (Scott Hall), 1-2-3 Kid (X-Pac) and Shawn Michaels; their politicking, confrontations and manipulation during 1995-6 to benefit themselves (and, they claim, WWF) is legendary in wrestling fandom and their ‘curtain call’ to say goodbye to Diesel and Ramon, who were leaving for WCW, ending up costing Triple H the win at King of the Ring 1996 and subsequent push as punishment for said out-of-character behaviour, leading to Steve Austin winning and becoming the biggest star in the industry, so in a way their bullshit did help WWF.
Posted by dwitefry at 12:13