With issue 18 we begin juggling multiple multi-part strips and that means we have to start dealing with things like ‘reading order’ and ‘continuity’ (as if these articles weren’t long enough). At the moment it’s not so bad, we’ll only be dealing with one or two strips a month as Fleetway continue to fool themselves in thinking fans want to read anything but Sonic stories, but once all the non-Sonic strips have been expunged it can get a bit complex. Hopefully you won’t notice too much because I’ve chosen a layout style designed to reduce that (I’m such a nice individual) but you may notice that the number of issues covered in each part becomes quite uneven and that stories start or end outside of the issues in the title. That’s because I’m mostly separating things up by the Sonic the Hedgehog strip stories and so for arcs like the Sonic 3 or Sonic & Knuckles adaptations or the Return of Chaotix that’s going to be quite a few issues whereas other times, like this, we’ll only have a couple to go through between major arcs.  As for the issue numbers not lining up, again it’s chosen by (mostly) the Sonic stories, and thus the back-up stories will be put where the majority of the story falls, or just where I think they fit best.
Anyway the series keeps pretty good continuity, Kitchen and Stringer are pretty good at fitting things together especially if they’re the ones writing the conflicting stories but the problems arise just from the general conflicts that happen in having a character appear in up to three stories per book, all of which are multi-parters – Tails simply cannot be in three places at once having an adventure that lasts a couple of days each. I will go through them in an order that seems natural to me, wherever possible I’ll try to get them in chronological order but I’m not going to jump ahead 20 issues to talk about a story that takes place during that timeframe, I’ll get to that when I get to those issues. With all that shit out of way, let’s begin with the very first Tails strip and what I’m now naming ‘Stuff Left Over From Last Entry’ or SLOFLE (slow-full):

The Nameless Zone (Tails strip, issues 16-17)
Quick Summary: having been left behind by Sonic, Tails is called back to the Nameless Zone by its rulers, the Enchanter Kings. The Nameless Zone is Tails’ home Zone and is connected to a dangerous place called the Land Beyond by the Dimension Bridge, a warlord from that land, named Trogg, is now standing on that bridge demanding to face the Nameless Zone’s champion, if he wins his hordes will attack the Nameless Zone (why he doesn’t just attack isn’t explained, I’m guessing it’s some kind of ritual or agreement between the two Zones but Trogg will never adhere to such bullshit again). The Enchanter Kings have picked Tails because he sends letters home where he lies and says that he’s the hero of Mobius and Sonic is his sidekick. Fitted with enchanted armour Tails is completely outmatched by the huge goblin thing that is Trogg, but luck is on his side and the Dimensional Bridge’s rope breaks, of course Tails can fly so he’s OK but Trogg is having to hold on by one stray rope, Tails suggest she surrender or that rope might ‘accidentally break’, with the portal to the zone fading, a triumphant Tails returns to where Sonic left, just in time for Sonic to find him.

That’s a lot of summary for a not-very good two-parter. I like the Nameless Zone and Trogg just fine but their introduction stinks, it feels so rushed – hey Tails, here’s your armour, beat this guy up or else he’ll invade, we won’t explain what’s stopping him from doing that anyway, kthanxbi – what makes that worse is that Tails is coming back to the Nameless Zone the very next issue, why not just have one longer introduction to the world rather than two rushed ones (both of which rely on the same bloody plot element, Tails fucks up but lady luck loves him and no one knows Tails can fly, even though he left the zone for being bullied for his two tails). It was probably to do with testing the water but it’s still annoying and the script is still rudimentary with exposition for dialogue. I expect better from Nigel Kitching. On the art side it’s someone called Dave Windett who is, frankly, amateurish, making the whole strip look like a cheap colouring book coloured in cheaply; not the best start for poor ol’ Tails, his strip will get better, trust me I’ve read this series since I was 7, but then it will become completely throwaway crap you can ignore, oh well, swings and roundabouts (or foxes and bridges). 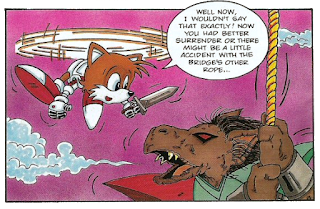 Casino Night (Sonic the Hedgehog strips, issues 18-19)
Quick Summary: Eggman has a hypnotising machine in his statue in the Casino Night Zone that turns visitors into compulsive gamblers, but Porker Lewis has built a disruptor that can stop this and make the machines pay out, unfortunately it needs to be quite close to the main computer. Sonic rushes off to get it closer but ends up getting himself and the pig caught by the electricians the Marxio Brothers, three Mario parodies by the way of the Marx Brothers who have escaped from Marxio World and work for Eggman now in his money making ventures. After escaping being tied to rollercoaster tracks by them, the Marxios seem to win by destroying the disruptor during a final battle with Sonic, but in truth Sonic’s just been distracting him long enough for Porker to be a human (pig) disruptor and do the device’s job before it, and then bomb the statue for extra cool points.

Casino Night’s not that good either actually, there’s some really cheesy parts to it including the last panel (so unnecessary) and much of the dialogue. There’s also a scene with one of those big pinball tables from the games, where Sonic says in one panel ‘I don’t think I can take much more’ and then in the next he’s through it saying ‘oh I made it’, I’m not sure if that was an intentional piece of humour or not. The art of course is fantastic, Elson hitting a stride he’ll be in for the next 80 issues or so, with a great almost-splash page in the aforementioned giant pinball table scene. And the Marxios are here! They amuse me but they are pretty baffling, no child in 1993 would have heard of the Marx Brothers (except me, but I’m the exception that proves a lot of rules) so I’m not sure what Kitching was thinking (“I’ll give the little shits some culture” I hope), they’re also pretty childish – this WAS just as the Mega Drive/SNES console wars were hotting up and Sega had already used their Genesis Does advertising (though not in the UK) but making characters just to mock the competition, especially when it’s a good game, is still, yeah, childish is the best word for it. Besides the Marxios and it being the weakest Sonic script Kitching will turn in for some time, the only other noteworthy things is that the unofficially-official online continuation of StC – StC-O (Sonic the Comic Online, naturally) has made the shirtless dog in part 1, now named ‘Bud’, into a recurring background element, in fact he seems only just shy of being their mascot.

The Land Beyond (Tails strip, issues 18-21)
Quick Summary:  Tails is brought back to the Nameless Zone to rescue Shirob, the third Enchanter King who disappeared years ago, shortly before Trogg arrived (can you see the plot twist coming or do you need to wait until it gets closer, say, a mile off?). Everyone thought Shirob was dead but a faint communication has come through from the Land Beyond, Tails will be accompanied by fox swordsman Errol Blackthorn who is an expert on the Land Beyond (or so he thinks). After being useless against some Goblins Tails explains to Errol about his lying and Errol vows to tell the Enchanter Kings, until Tails saves his life in the Labyrinth and he starts to reconsider. They find Shriob about be sacrificed to The Pit Beast, unable to escape the enraged and hungry monster Tails stays behind to fight it because he’s a decent little fluff-ball but because he’s useless and Kitching’s feeling lazy the Pit Beast hits his head and knocks himself out immediately. The two heroes follow Shirob right into a trap and he reveals himself as (SHOCK!) Trogg, who has set up this whole thing to get revenge on Tails for the events of ‘The Nameless Zone’. Trogg was once Shirob but turned to the dark side after making contact with The Evil One. Trogg overpowers them but because Kitching is still feeling lazy just as Tails is about to be scragged a portal appears because, as is explained only afterwards, the Enchanter Kings can’t keep Tails in the Zone for too long. Errol doesn’t tell the Enchanter Kings the truth and Tails returns to the Emerald Hill Zone.

Hey, they explain the ‘defeat your champion’ thing in part 1, it turns out it’s a spell the Enchanter Kings cast for protection, ta for that, Kitching also tells us exactly where and what the Nameless Zone is, it’s not another dimension, just a zone hidden from everywhere that most people think is a myth (which just makes the portal explanation an even bigger pile of horseshit, or foxshit, or whatever-Trogg-is-shit). 4 issues is a lot better suited to showing us a big concept like Trogg, The Land Beyond and The Nameless Zone effectively, creating a straight fantasy setting in Sonic and making it feel naturally a part of his world. Windett’s art is also improving, some of his backgrounds and even some of his colouring are quite atmospheric, the dialogue is also much improved from ‘The Nameless Zone’, it could do with some banter but at least it’s not 90% exposition. But it’s a bloody lazy script though, goblins flee just because Kitching needs that to happen (I suppose they could have been in on the plan?), both the Pit Beast and Trogg confrontations are the epitome of anti-climactic and then bam, a portal to end the story quickly because we’ve run out of pages, no foreshadowing about the time limit at all. And speaking of foreshadowing, the plot twist with Trogg/Shirob isn’t so much foreshadowed as thrown at your head by someone shouting ‘IT’S TROGG!!’.

I feel kind of bad that I’ve had to spend this entire part slagging off Nigel Kitching’s writing, especially after I built him up to be something of a Sonic genius, he in fact is a really good writer as we’ll see in Part 4, and Trogg will get to shine in a future Kitching strip as well, I guess he was just having an bad month or so, and no-one’s perfect (not even me). Next time we’ll start on the big multi-parters and meet…oh yeah, shit, sorry there’s Sonic story in issue 20, sorry so little happens I forgot all about it. It’s called ‘Hill Top Terror’ (Sonic Strip, issue 20), Super Sonic fights a Rexxon and stops a volcano, it’s the most throwaway appearance of Super Sonic but the art’s quite nice. So anyway next time we’ll start on the big multi-parters when Kitchen and Elson adapt Sonic CD and meet important characters like Captain Plunder, Grimer, Amy Rose and Metallix as Sonic’s world begins to grow and I begin to feel like I’m actually getting somewhere with all this.

Email ThisBlogThis!Share to TwitterShare to FacebookShare to Pinterest
Labels: A Look At, Comics, Sonic the Comic, Sonic the Hedgehog, Video Games