Five Examples of Crap I Waste My Money On: Bootsale Report 5*

Another weekend is over and thus another bootsale has eaten up the disposal part of my income. I did utterly great, in fact it was less like a bootsale and more just like a usual shopping trip, only dirtier, dustier and all the shops were staffed by moaning middle-aged irritants with sunburn. There’s usually a completive feeling to bootsaling, and a kind of desperate searching amongst the crap for for things that might interest you, but today I just strolled, nay, sauntered, ‘round, picked up items I’d been looking for with little to no scrambling around boxes of broken McDonald’s toys and naked Action Men and was even able to go back later on and buy a couple of items I’d passed on the first time (usually the chances of them still being there, and being the price you’re willing to pay, are about zero) I even treated myself to a slice of cake – I am a fucking hedonist. And thus it’s time for another Example of Crap I Waste My Money On. I‘ve kept it down to five this time because I feel generous (and utterly depressed so I figure that my enthusiasm glands won’t last for longer than five items). Also, night time shots – because I couldn’t be arsed to get up and turn the other light on – so enjoy moody toys. So are you sitting comfortably? Then I’ll being: 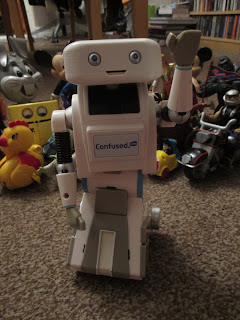 Brian!
£2 ($2.66)
Keeping things thematically linked to my last Crap I Waste My Money On post he’s another adorable corporate mascot for something I don’t use! And yes his name really is Brian. Brian is the current mascot of price comparison site Confused.com, though I do miss Carla Confused and her incredibly animated breasts Brian is so adorable he has become a bit of a household name in Britain and – presumably noticing how Compare the Market had all the success simply by offering free meerkats in smoking jackets to people who bought insurance through it – Confused.com has been giving away free Brians with people who buy insurance through them, a completely original idea that is no way influenced by meerkats. I so wanted Brain but my family don’t use Confused.com and I have nothing to insure; not having a house, car or even a bloody bicycle of my own so I was shit out of luck and feeling not unlike I did when I was four and wanted the Burger King Kids Club toys but could never acquire them because my mum refused to pay Burger King’s prices (and quite right too, Burger King charge way too much for what amounts to ‘slightly better bullshit than McDonald’s’) and then amazingly, I find him at a bootsale, for a ridiculously cheap price and now Brian lives in my home alongside all my meerkats *cheers and confetti*! 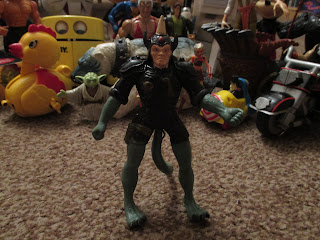 Grimlord!
£1 ($1.33)
Grimlord was the Lord Zedd of VR Troopers, in fact if memory serves me the only real difference was that Lord Zedd looked like a nightmare and Grimlord looked like the world’s most badass ice cream mascot, and also something about virtual reality. Anyway he’s only here so I can share some trivia with you. Grimlord wasn’t produced in Kenner’s VR Troopers action figure line – he was going to be but was ultimately scrapped – but he was, as you can see, released as a Bendable Figure… even though Kenner made those as well, why did Kenner do this? Fuck knows but the bendies are pretty much in-scale with the regular figures. 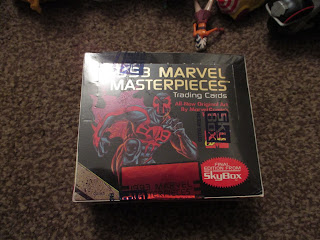 Sealed Box of Marvel Masterpieces 1993 Trading Cards!
£10 ($13.28)
Two bootsales, two great trading card finds? What the fuck is going on? Unless you’re really into Yu-Gi-Oh you usually have no chance of finding anything trading card-y at these places but today I could have had my pick of four massive trading cards from the early ‘90s. I went with Marvel Masterpieces ’93 out of pure nostalgia (and because Fleet Ultra ’94 was twice the price) I got into X-Men due to the animated series so many of my first X-Men comics – usually X-Men Adventures of British reprints – and the X-Men comics I read the most slightly later on (the ones that most resembled the carton series) – were all from when Marvel was HEAVILY pimping out Marvel Masterpieces ’93 and they were just the swankiest I’d ever seen, leagues above the Football stickers and Garbage Pail Kidsalikes that filled up our local corner shops and Woolworths and even today the Marvel Masterpieces and Fleet Ultra sets are my idea of ‘top of the line trading cards’ but they were only available in Comic Shops and there wasn’t any ‘round here, so I think I own maybe three packs worth total but NOT anymore, now I have a complete set and better yet can take them out of a display box and open them just like I would have done had I been able back in ’93! I am so sad but for the 20 minutes this takes up, I will not care. 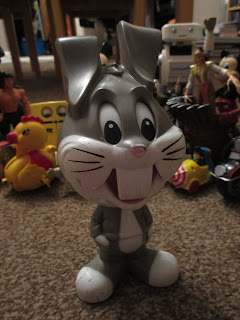 This Fucking Bugs Bunny!
£2 ($2.66)
You would not think that a dirty macrocephaly-suffering Bugs Bunny would be a window into my psyche (seriously this thing was gross, it took a long deep clean to get it to look this filthy) but it is genuinely the cause of one of my most embarrassing childhood moments and one that still makes me feel like dogshit to this day, so of course I’m going to share it with you: when I was about 8 were at a toy show in a nearby leisure centre and my little cousin got something free from a stall by saying something like ‘oh mum look at that’, my Aunty Karan came and got my uncle, myself and my dad so he could thank the stall holder as well, while at the stall I pointed out this Bugs Bunny and started a sentence to my dad with pretty much the same wording ‘dad, look at that…’ what I was going to say ‘dad, look at that Bugs Bunny, why does it have a giant head?” dad would almost certainly have not known this but I was 8 and I thought my dad knew the answer to the life, universe and everything so I was sure he’d know why a Bugs Bunny toy had a deformity. I didn’t get the chance to say this because the stall owner (who’d been thanked) chuckled and said in the most condescending way possible ‘ah good try but this Bugs Bunny’s old and blah blah blah collectible’ and as I was 8 and thus not allowed to just say ‘fuck you, let me finish’ I settled for feeling so embarrassed and so guilty that I would have been quite happy if a meteorite had struck the leisure centre and killed us all even though I had no reason to be so, I didn’t want a giant headed Bugs Bunny and didn’t even know the bloody thing was on the same stall, I just wanted to know why it had a huge head. But of course who’d’ve believed me? So I shut up and felt like shit.
I’ve been on the lookout for one of these ever since because I figured that somehow owning one would allow me to own the memory or something and I wouldn’t feel horrendous every time I thought of big headed rabbits. I think it may have worked. Incidentally the reason it had a huge head is because it’s a pull string toy that talks, this one doesn’t work so well anymore and sounds like it’s summoning a terrifying and powerful Elder God. 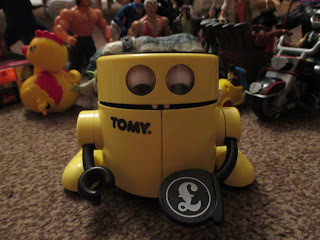 Mr Money!
£4 ($5.31)
Aaah! Oh my god, oh my god, oh my god, Mr Money, at last, a Mr Money of my very own! An ‘Automatic Bank Robot’ Mr Money is just a robot that eats your money, this concept has been around since it was still ok to make things for children out of lead but I didn’t know that when I was four and this was the coolest concept ever and it was on my Christmas List every year for…god I have no idea, a decade? This thing was always in stock in Argos apparently. I never got one, I honesty have no idea why my mum thought that buying me an adorable robot that encouraged me to save was a bad idea but she did, I love my mum but sometimes she doesn’t know dick, Mr Money would have improved my life in every way had I owned one when I was a kid, he would have been my psychiatrist, bank manager and slightly sarcastic sidekick all rolled into one and you can bet he’s going to fulfil all these roles and more now I’m an adult, I imagine he talks like a cross between Pikachu and Johnny-5. Now I own him I have the following revelation: he’s almost the exact same colour as banana medicine, if you don’t know what that is I cannot explain how...shudder inducing it was, if you do know what banana medicine is please don’t hold that against Mr Money, he’s wonderful despite this, and probably linked to Skynet.

And there you go, I’ve wasted ten more minutes of your life on other people’s old junk and personal anecdotes you don’t care about, I thank you for the opportunity – but at least you re-learned the name of the villain from VR Troopers and you know that’s going to stay in your brain far longer than anything important so again I thank you for letting me delete the names of at least two presidents from your personal hard drive for a lizard-man. I’m off to tell my troubles to Mr Money so you can find your own way out.
Posted by dwitefry at 13:00

Email ThisBlogThis!Share to TwitterShare to FacebookShare to Pinterest
Labels: Bootsale Report, Examples of Crap I Waste My Money On, Toys