Another League topic perfect for me to spend a  thousand or so words on: Who doesn’t love gambling on a blind box or mystery package?

Born in 1986 I got to be a kid in at the tail end of the First Great Era of Blind Bagged Mini-Figures™. I came a little too late for M.U.S.C.L.E., Battle Beasts and Garbage Pail Cheap Toys but not too late to pick up dozens of them from bootsales around the county – perhaps the best thing about my childhood is due to timing and having the parents I did I got to grow up in three decades: I enjoyed the contemporary fads of the late 1990s, got to enjoy the 1970s through my dad and uncle who were determined to give me their childhood but better and got to enjoy the 1980s fads through my mum and her parents' love of bootsales, due to how bootsales generally work I even got to enjoy things like He-Man in roughly the same yearly waves as kids at the time did, only five to seven years or so later. So while I missed being contemporary with what are probably considered the ‘classics’ of the 80’s and 90’s mini figures I was right there for some of the best – Mini-Boglins and Monster in My Pocket as well as the criminally underrated Trash Bag Bunch, Bad Eggz Bunch and P.E.T. Aliens. I was also on the ground floor as it were for another type of toy that could very much be considered blind-bagged mini-figures but generally aren’t - that’s Kinder Surprise’s hand-painted figurines; America has banned Kinder eggs for years but they’re still available at every sweet shop and supermarket in the UK, were just as plentiful in my boyhood and they’re my favourite chocolate ‘bar’ so it’s not too surprising that I have piles of nostalgia for the most sought after of Kinder Surprise prizes of my childhood. All of this has left me with an undying love of mini-figures in general and so for this League post, in a shameful rip-off of Dinosaur Dracula’s 5 Random Action Figures, I have for you five mini-figures of note from my era, so are you sitting comfortably? Then I’ll begin: 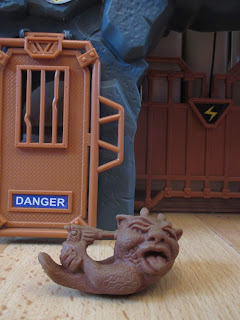 Poig!
1991, Mini-Boglins
This is exactly what it looks like; this is a Boglin playing Russian Roulette. I really shouldn’t have to type much more about this really - it’s a mini-figure playing Russian fucking Roulette. Funnily enough this figure was replaced in later years, I can’t imagine why, oh it could be because it was a children’s toy trying to shoot itself. Funnily enough this didn’t really create the moral outrage you might think, it was a different time I guess when people were far less offended by certain things and far more offended by video games which were almost always far less offensive than a Boglin seemingly simulating suicide. 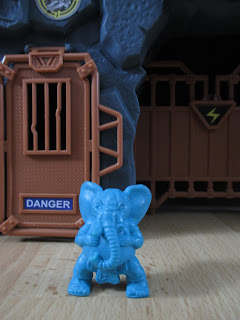 Ganesha!
1992, Monster in my Pocket
So there was this time that Monster in My Pocket pissed of one of the largest groups of people in Britain by portraying one of their most beloved and most commonly worshipped deities as a ‘monster’. This created a moral outrage as Hindu parents the country over began complaining very loudly and very justly about how Ganesh was being literally demonized. Now in fairness to Matchbox they were pretty equal opportunity, including ‘monsters’ or thereabouts from several religions  in MIMP including Satan, Kali and the Golem but most of those were villainous or at least acceptably nasty, Ganesh ain’t, most Hindu gods multi-task so they do have some ‘nastier’ jobs but Ganesh isn’t comparable to like Ares or someone. Matchbox withdrew the figure, making it slightly harder to find (it’s the rarest Series 1 & 2 Monster but not exceptionally expensive or hard to find) and there’s conspiracy theories that this was connected to the lost ‘series 3’ figures and why they got lost. Matchbox of course learnt their lesson and didn’t release an even more monstrous representation of another beloved Hindu deity like, say, Hanuman in the very next series of mini-figures. Oh wait, no, they did that. 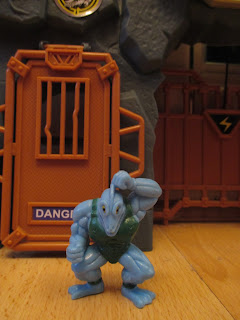 Shark Bite!
1995, Monster Wrestler in My Pocket
On a happier note, Monster Wrestler in my Pocket rejuvenated my favourite mini-figure line by that most tried and tested of methods – Kellogg’s. Wait, what? Yeah Vivid Imaginations created a bunch warped American Professional Wrestlers as a promotion with Kellogg’s Frosties (Frosted Flakes in the US) and it worked so well they released a whole new line of blind bagged mini-figures and they were sufficiently successful and I was happy. Shark Bite is from that original 9 Kellogg’s figurines and he’s probably the best of those original contestants, though I’m happy to accept arguments for Mane Man and Frank the Stone but they can’t quite match up to a wrestling Ichthyosaur in garden furniture green. 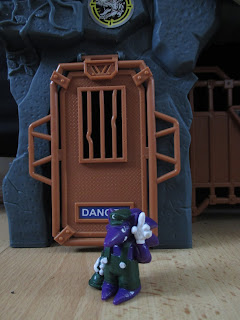 Cynic!
1993, P.E.T. Aliens
P.E.T. Aliens were wonderful, they were a group of alien who came to Earth (specifically Britain) and desperately tried to fit in and find work – one joined the WWF, one became cop, one became Madonna, E.T was a phone repairman, there was a Xenomorph jobbing as a crossing guard, it was fun. Even though he’s mocking two things I really fond of – Sonic the Hedgehog and Super Mario Bros – I like Cynic; his story was that he became a video game mascot and made himself a fortune, he smacks completely of snobbery and jealously (“how dare cartoon animals from lowly video games be successful when my toys aren’t”) but he gave us Sonic obsessives a figure of one of the most commonly drawn pieces of fan-art – a Sonic and Mario mash-up, he’s even doing the classic Sonic finger wagging pose! Oh and purple is undoubtedly the best colour for him, why? Because it’s what you get when you mix red and blue! 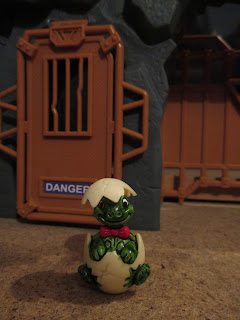 Columbo!
1991, Teeny Tiny Terrapins
Terrapins are born wearing bow ties; it’s a little known zoological fact that is often overlooked so it’s great to see Columbo setting things straight and teaching children who ate Kinder Surprise back in 1991 something while they stuff two kinds of chocolate down their throats. Tiny Terrapins, who have various names around the world, are the pinnacle of Kinder Surpirse toys for me, they’re not as detailed or shiny as some of their successors and they’re not ghosts but they’re the perfect amount of adorable to make them suitable for both sexes (this was before Kinder Surprise was split into ‘for girls pink’ and ‘for girls blue’, something I still utterly fucking loathe) and to make finding one inside an egg just feel right, opening up the plastic ‘inner egg’ (capsule? Does it have a name? the yellow thing) to find sweet turtle looking out just fits better than yuppie hippos, racial stereotype Sharks or even ghosts. Also terrapins are born from eggs, which makes them way more suitable and raises a good point I’ve never contemplated until just now, there was never a hand-painted set for chickens, even though chickens are the most famous thing to come from eggs, there was monkeys, multiple gnomes, Smurfs, but no chickens, how odd.

And there you are, I’d like you for reading this (if you did, if you didn’t then no thanks for you at all) and to thank the League for allowing me to kill some time that really needed killing and ignore the obnoxious heatwave we’re having today. There are so many reasons to like the Pop Culture League, and with that perfect segue, here are some more:

Green Plastic Squirt Gun has no many things I want to own
Alexis Universe has so many other things I want
Garbage Pail Kids represent at 20 Years Before 2000
Copyright 1984 is fighting addiction and doing well
The Toy Box ain’t happy and has a pretty interesting tale to tell, check it out; it insults Hot Topic, always good.

I’m going to be missing three whole League challenges as I’m going on holiday next week, maybe I’ll do one big Mega League post for the first one after I get back.
Posted by dwitefry at 10:08