As I said I won’t be doing Pop Culture League every week but this week is another chance to work through my various traumas, yay. This week’s topic: The local Wax Museum is having a fire sale and you have the opportunity to add a life-size, life-like action figure to your collection. Who do you choose?

Why is Wax Museum capitalised? Whatever I’m going to capitalise it this whole post now
Anyway I think I’ve gone into this but I may not have, whatever I’m going into it in-depth now: I am paralytically phobic of mannequins, specifically life-like mannequins; as a good example of where my mind draws the line with where to become terror struck – the silly spooks in the Haunted Mansion graveyard don’t scare me at all but the dancers in the ballroom scene do, the Pirates of the Caribbean sit on the line. It’s called Automatonophobia and it is a fully recognised phobia (except by Microsoft Word’s spellcheck function it seems), Automatonophobia and god I wish it had a shorter name, why can’t it be like hydrophobia, short, simple, catchy…what I was talking about? Oh yeah Automatonophobia is the fear of ‘false representations of sentient beings’ and includes mannequins, ventriloquists dummies, The Hall of Presidents, Keanu Reeves, everything that’s too big to be considered a doll (that’s Pediophobia, which you’d think would be either a fear of paedophiles or feet but no) and it sometimes crosses over with a fear of corpses, which fits perfectly because zombies and ghosts are the only ‘monsters’ that creep me out and stuffed animals worry me more than their living counterparts.

I know exactly what caused this phobia in me – it was a mannequin used in a tourist attraction in Devon called The World of Country Life, which shares a site with the holiday camp I went to every year for my whole childhood (Haven Holiday’s Devon Cliffs). The World of Country Life is still going (and still a really good museum, you should totally go if you’re ever in Exmouth) and is still using this bastard mannequin, the first time I saw him he was glaring out of a jail cell. I grew up thinking this was the stupidest phobia to have because, well because my grandad outright told me it was and would be completely frustrated every time I refused to ‘just get over’ my fear because it ‘made no sense’ thus proving he HAS NEVER GRASPED WHAT A FUCKING PHOBIA IS - IN OVER 70 YEARS. It isn't, in fact one of my closest friends has suffers from it too, and no phobia is ridiculous, well they are but that's the point, they're irrational, and by being so no one should feel silly for having one. But hey I can still play, my phobia doesn’t cover cartoon characters and most mythical beasts (it does seem to cover the Jim Henson TMNT which is a pisser) and my Wax Museum is hypothetical, it can have a cartoon characters section – I’m sure some do, I’ve never been to one because it’s my personal idea of hell – so are you sitting comfortably? Then here are my top picks for characters I’d like to have life-size figures of (and you KNOW I’ve thought about this before now):

Sonic the Hedgehog – my number one choice, which is kind of odd as despite my love (to put it mildly) of the Sonic the Hedgehog franchise I can’t say that Sonic would be in my top 10 characters (from his own franchise, poor bastard) but the very thought of having a life-size or even bigger than life-size (Sonic’s around 4 foot) Sonic is just really exciting to me. I’ve said for many years that were I come into silly money the only extravagances I’d have would be a jukebox, a swimming pool and a life-size Sonic the Hedgehog fibreglass model. Ideally I’d like one based on the pre-Sonic Adventure box art, especially the PAL/JPN Sonic the Hedgehog 1 box art but I’d take a modern Sonic too if that’s all the Wax Museum had. 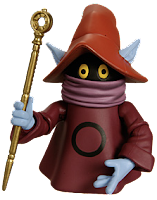 Orko – Ideally I’d like Battlecat but I think that at life-size he would probably just about set off my phobia, somehow I think it would be even worse if he was wearing his helmet, but even if you gave Orko a real fabric shirt and hat he’s still be a living cartoon and come on, you wouldn’t want to walk into your living room and be able to greet Orko? “Good morning Orko, I slept very well today thank you, ooh I think I’ll have toast, have I told you today that I prefer Snarf to you but think you’re way less annoying than the Trobbits from Blackstar? I know, I say the nicest things, can you believe I’m single and hate my life? I knew you’d understand.” Some people apparently don’t like Orko, I find this to be madness 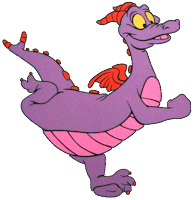 Figment – I have a vintage plush Figment (of course I do) but no way would I turn down a life-size replica of him, it wouldn’t be much bigger than my cuddly toy but it would be the closest thing to having a real Figment to be my friend, and it would be small enough to make it portable, I could take him around with me. I’m so lonely.

R5-D4 – sure the obvious choices are R2-D2 or BB8 (and I KNOW that Wax Museums have these, shit the Disney Store has them, but I’ve see the used in Star Wars displays, from the safety of Google Image Search anyway) but I genuinely have always preferred R5-D4’s design. I used to have both droids’ old Kenner action figures as a kid and R5-D4 was my man even then, I just find his ‘head’ design and colours scheme more visually pleasing. Plus if we stick with the scenario as given to us, he would be way cheaper than the other two but would bring me more joy than either. 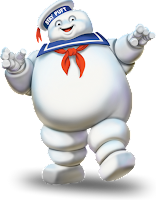 Mr Stay Puft – alright so he wouldn’t be life-size because that would be insane but a seven or so foot tall Stay Puft Marshmallow Man would be fine or even just a segment of him in a larger scale, say his arm, top if his chest and head? I’m assuming my local Wax Museum has a Ghostbusters set up and it has them blasting their most recognisable enemies – Mr Stay Puft, Slimer and I dunno, Fearsome Flush (oh my god if they had a life-size Fearsome Flush I would buy that even if I had to sell a relative, can I change this choice to Fearsome Flush? Who the fuck can I commission to make a life-size Fearsome Flush? Could I make one myself? I must investigate all avenues leading to me owning a life-size Fearsome Flush) and as they’re selling off the whole display I can go ‘well I’ll buy the Stay Puft section of this’. If it were a segment I would have him reaching around my armchair, if it were a full figure I would have him posed behind the Television I think. I would also be happy to purchase Slimer though I will admit – and I am happy to have Ray Parker Jr singles thrown at me in disgust – I’d prefer the Real Ghostbusters Slimer if I had to have a life-size Green Ghost.

The Crites – so I’ve actually tested this (I was waiting for someone at a convention and this is how I pass the time) most Mogwai and Gremlins do set off my Automatonophobia (except, oddly, the Bat Gremlin from Gremlins 2) but Crites from Critters don’t. Moving along why aren’t there mass produced Crites? You can get them but they’re low print-run or fan-made things and I can’t afford one, I want one with a plastic face and a plush body sold in Forbidden Planet for £18.99, I want a My Pet Monster but it’s one of the villains from Critters. Bute even better I want a Wax Museum quality life-size one to sit on my sideboard and hold my remote controls.

The rest of my picks are all Pokémon. Really, I could have made this just a list of the 100 Pokémon I’d have life-size statues of – it would include Squirtle, Kakuna, Oddish, Golem, Magnemite, Haunter, Porygon, Sentret, Togepi, Marril, Ninjask, Gulpin, Kecleon, Relicanth, Metagross, Magnezone, Togekiss, Woobat, Trubbish, Chandelure, Tyrunt, Goomy and – I’m not kidding here – my number one pick – MissingNo. I want an ‘action’ figure of MissingNo more than any other Pokémon so imagine how much I want a human-sized MissingNo, this glass door of glitch standing in my living room, welcoming my guests by multiplying the 6th item in their bags and giving them nightmares of the Ancient Ones.

As is customary for the League, here are some other members’ answers:
The Toy Box isn’t so keen
20 Years Before 2000 has a really creative idea
Green Plastic Squirt Gun, well, Green Plastic Squirt Gun
And curiously Collector’s Universe brings up my other phobia, Ranidaphobia, thus their answer would be the best way to give me a heart attack, but insure me before you do this, no point struggling with my corpse of you’re not getting paid for it.