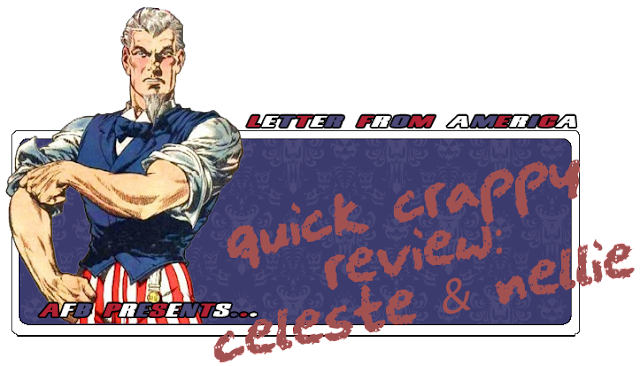 Welcome to the Return of the Jedi of our quick, crappy reviews of Disney Attractionistas dolls, a line of 12” Monster High inspired dolls being sold exclusively at Disney parks around the world and based on attractions at said parks. While at Walt Disney World I looked for dolls based on The Jungle Cruise and Space Mountain feeling (rightly) that there had to be ones for those two attractions if there were dolls for the carousels and Mad Tea Party, I was unsuccessful. Turns out they were just out of stock and the first wave of Attractionistas did include Jungle River and Space Mountain dolls, isn’t eBay a wonder? 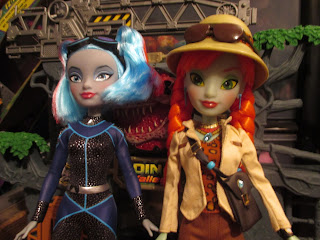 Quick recap of my overall feelings: they’re a little bit cheap looking and feeling but robust, they’re very tall and their articulation can be summed up as ‘Barbies with ball jointed legs’ so they’re not that posable. Each doll comes with a plastic hat and a plastic pet but no stand and as they cannot stand on their own enjoy eBaying some generic doll stands, I have, it was thrilling. Their basic premise is that a bunch of friends who all obsess/identify with a particular attraction (not that any real people do that says the man who spent hundreds of dollars on Haunted Mansion merchandise a very short while ago) went to Disneyland and wished on a star because it’s Disneyland and basically became living embodiments of their attraction of choice, I think, it’s a bit unclear. 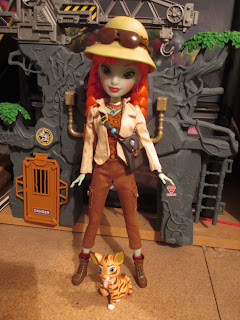 As she was the first to arrive we’ll start with Nellie, who represents the Jungle Cruise and is named after one of its boats – Nile Nellie, her box says this about her: Since her childhood expedition up the Belgian Congo, Nellie has been a nature girl.  She and her tabby cat – also named Congo – find natural beauty everywhere, from rolling landscapes to bouquets of flowers. Nellie is a friend to all animals so naturally her hobby is wildlife photography. On her many Jungle Cruise attraction journeys, she dreams of her next expedition in a far off land to photograph some new friends.  Hey kids, Google the Belgian Congo and find out how one rich prick enslaved most of the native populace of a part of Africa just for fucking rubber. 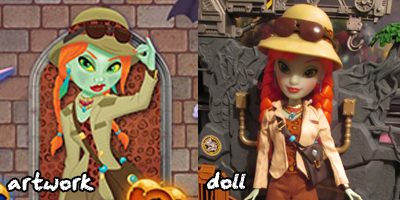 I need to get this out the way – why isn’t she or her cat called Sam? There is one named character on the Jungle River and his name is Sam and it’s a unisex name, I understand if they wanted to call her Sammi just to make sure but this doll is being sold in a country where any word counts as a given name so I don’t see why that would be necessary. Other than that my biggest complaint is she has such a neutral face when her artwork gives her this determined look that I thought rather suits her, her face does have a little more sass than some of the others, I think the shape of her eyes help. Her outfit is great though, and reminds me of old Action Man and G.I. Joe outfits although I think I might question her wearing an animal print top, I doubt it’s real but that’s a little bit strange. Speaking of strange, I love that they have her actual socks instead of just moulding the tops of them as part of her boots, I have no explanation for why this is but it really pleases me, this is why I make sure to put the world ‘crappy’ in the title of these reviews. Actually, curious choice of t-shirt aside, I like everything about this design, her skin colour is paler on the doll than the artwork but still looks great and goes with her hair beautifully, green skin and ginger hair works, who knew, someone tell She-Hulk, and y’know, ginger hair in two plats is the most attractive hair style in the world so she has that going for her too. Back to the skin of a moment though, it looks delightfully zombie-ish and that seems to fit perfectly with the fictional darkest Africa that the Jungle River uses, even though Zombies are actually Caribbean in origin (Haiti specifically) there’s something fitting about seeing zombies shambling through locations like those on the ‘River (and there is postulation that the term and even the concept originated in the Kongo), it’s no less accurate than some of the other portrayals on the ride.

Being a lot deeper, her pith helmet works a lot better than some of her fellows first waver’s hats but the volume of her hair still interferes somewhat if you try and push it down to the point where it looks like she’s wearing it correctly (the result is it popping off, naturally). So she’ll have to wear her pith helmet a little gangsta style, still it allows you to see more of the best hair ever I guess.  Congo is so fucking cute, not quite as cute as Maddie’s bunny but very close, they’re going to be friends. He looks a little sad, like you haven’t petted him enough because there can never be enough petting for a cat so adorable. Still, I dunno if I consider the tiger scene to be as iconic as the bathing elephants or trapped safari scenes and surely Jungle Cruise’s signature animal is the hippo? Couldn’t she have had a little hippo (called Sam)? It’s not like we’re striving for realism here, the owner has bright green skin. 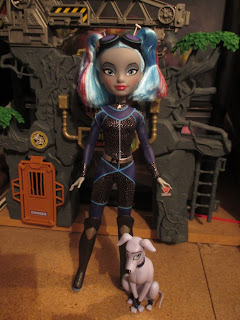 Then there’s Celeste and just off the bat, I really like her name, it’s derived from celestial and while the word isn’t exactly interchangeable for ‘space’ it does mean something in the sky or space and it’s just a good piece of wordplay as you couldn’t really call her ‘Space’, I respect that I may have told you something you already knew. Anyway Celeste represents Space Mountain and her box says: Although she loves the fireworks at Disney Parks, Celeste feels that nothing can match the light show that is our galaxy. Through her telescope - with her greyhound, Rocky, by her side – she gazes at stars, planets and her favourite attraction, Space Mountain. She is very scientific and loves learning how Disney Parks are created. Her dream is to design and build a way to the stars and beyond. Each time she blasts off on Space Mountain attraction, she feels one step closer. I am completely satisfied with this, except that there should be a ‘the’ before the final Space Mountain but criticizing American English for being poor English seems a little obvious, even for me and my love of poking fun of the Land of the Free at any given opportunity (I love ya really America). 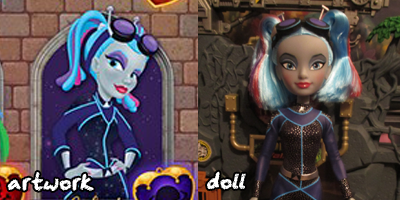 Who knew anyone at Disney had heard of Cyber Goth? But on that OH MY GOD CYBER GOTH DESIGN ELEMENTS ON A DISNEY TOY *ehem* but that’s where my first complaint comes in, her cross-sell artwork has her with dreadlocks but her actual doll just has bunches, and while bunches are cool – especially multi-coloured ones that look like a very inviting ice lolly – dreadlocks are so much better. I’m guessing that at some point someone discovered that bunches are easier, cheaper or both for a mass-produced doll but, yeah dreadlocks are so much better.  Celeste’s kind of a contradiction, ooh that sounded pretentious, but she is – she’s one of the best designs of the first wave (and not just because I have a Cyber Goth fetish) but she’s also one of the cheapest looking of the Attractionista line – her entire outfit is printed on one leotard and her boots balloon from thinness, softness and being cut too low more than any other of the doll’s outfit’s soft plastic parts, she’s also lacks the stylised and starched hair and seems to have lost some gauntlets between final design and doll. BUT the nice design and choice of colours kind of masks most of this, she’s very much a doll that looks better from a slight distance is what I think I’m saying. 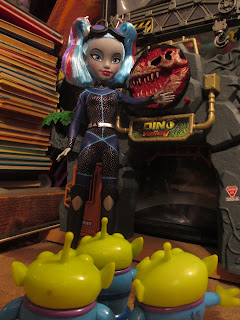 Happily she doesn’t come with a hat, even though Space Mountain’s show building was made to be a hat, and instead just has nice goggles that she has on her head right out of the box, so no moaning there - they look good. Then there’s Rocky, her pet – ok I don’t get this one, I get the name (after some Googling to see if there was an astronaut called Rocky), it’s just a play on ‘rock’ as in ‘mountain’ as in Space Mountain (I think) but why is it a greyhound? The closest I could come up with is that RCA (Space Mountain’s original sponsor) uses Nipper, the dog looking into a gramophone that most of us in the UK associate with HMV, but Nipper’s a Jack Russel-looking thing (Nipper was a mongrel) and this dog is specifically called a greyhound. Is it something to do with Fed Ex that I don’t get? Shouldn’t she have a pet alien? Logic behind the choice of greyhound aside (a strange way to start a sentence) Rocky’s big and feels better quality than her master, in fact she might be a reason that Celeste got some cost saving corners cut on her, at 4 and a half inches tall if you’ve been looking for the perfect effeminate space dog to menace your G.I. Joe and Corps figures, here it is. She also looks decided shifty – I know she’s supposed to look cute and coy but she just looks like she’s shit in Holly’s handbag, knows she’s done wrong, is very happy about having done so and is waiting for that delicious scream of frustration to emit from the Hollywood Tower Hotel and reward her for her efforts. 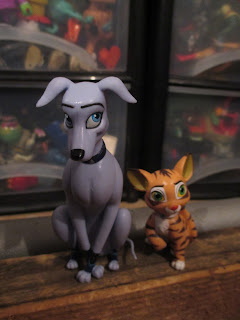 Conclusion time: I’m very happy with Nellie and pretty happy with Celeste, I like them both as designs but Celeste’s doll is a little on the cheap side and very much the Attractionista that’s closest to the Pixie Punk style Monster High knock-offs that these dolls represent the best quality versions of.  I have no idea why a space girl has a greyhound for a pet and I don’t trust that greyhound one bit. On a bit more of an abstract thought, do you not think that these two look like they’re closer to each other than they are to the other girls? Like they’re best friends within a group of best friends? Maybe it’s because they represent complete opposites – the idealised future and the romanticised past – and opposites attract and all that. 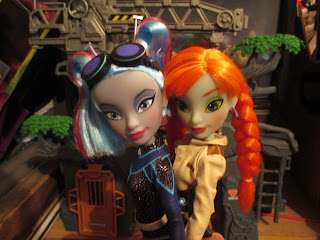