This week is a topic the League has posted before and I thought it was odd then, after all people will collect anything and that’s not going to change but trying not to be a stick in the mud, today we’re discussing:  Future Collectibles, What will be the hot collectible in 2046?

I need to buy whoever greenlit this pitch a beer, many beers, an entire pub full of beers, a brewery. I would never, in any wildest dream, have believed that a line of monster toys recalling the work of classic hot rod art, classic hot rod artist like Big Daddy Roth and Bill Campbell’s Weird-Ohs model kits would be released in 2013 with a fucking app. But here they are, and of course they come with an app, everything comes with an app, but apps are a so very modern, disgustingly modern in fact, to the point they annoy me (just the word ‘app’ annoys me – when did ‘programme' become unhip?) while these toys find their influences and feel firmly in the past, a feel that’s very much that of 90’s toys (I would have been all over these in the early-to-mid ‘90s, these were born to be played with with Street Sharks) with a little of the 80’s thrown in (tell me you don’t see the designer of these owning Madballs and Monster in My Pocket?), so an app just feels very out of place – of course it IS a horror themed racing game that I find very reminiscent of the PSOne era so I can’t hate on it too much, and an app does mean that this line combines something from the 60s, 90s and 2010s into one deliciously monstery pudding – why weren’t these a massive hit again? I kid, these are way too cool to have been a hit – mind you I thought that about Monster High too so maybe I know NOTHING but they do seem to have been designed specifically to be a cult hit, to be a new Food Fighters or Primal Rage, I just don’t think anyone told the creators that.
I can see them thinking ‘yeah we’re gonna teach the kids of today to love the much better things we loved when we were kids with this awesome new toyline, add an app and they’ll be completely fooled’, shame that never seems to work (further proving the world is unjust and unfair) and as the die-cast toys are currently in Poundland…well…still the upside is that we, the adult who never grew out of toys of today, get to have a great line that can be found very cheap today and the children of today will get to have a great line to remember, figure out and track down when they become the adults who never grew out of toys of tomorrow.

Anyway the toys came in two sizes, large electronic cars and small die-cast cars, which seem to be the standard size as two playsets were released in the die-cast’s scale, and both were split into racing teams (Driving Dead, Lunatic Legends, The Experi-Mentals, Freak Force & Animal Asylum). I have all of the cars bar the die cast range’s chase variants (which I so want but y’know how it is, money, competition from other toylines, effort, not even sure they were made, those sort of things) but for today’s short article I just want to focus on the large electronic cars because they were the first things I found of the line (in The Range no less), so have a look: 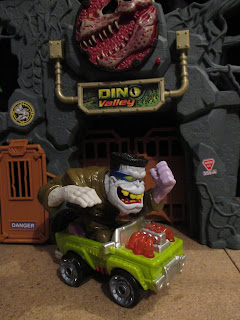 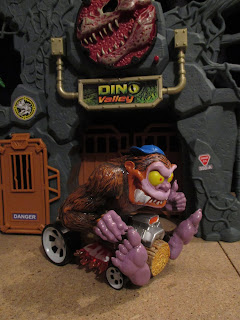 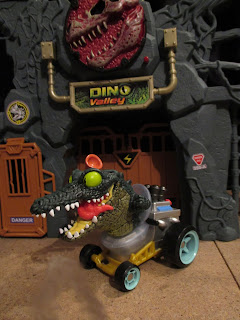 Were I forced to pick a favourite it would come down to a cage match between Zoom Zombie and Flattop Frank. Flattop Frank is the line’s Roth/Hot Rod homages taken up to 11, his choice of car (and engine), the signature hand on a giant gear stick, the face, the teeth, he looks like he rode right off a Revell model kit so I usually think ‘yeah he’s my favourite’ then I remember that Zoom Zombie is driving a hotted up hearse and the button to activate his light up feature is the hand of his current ‘customer’ escaping and I’m just not so sure anymore. Perhaps fittingly this a similar conundrum I encounter with said Revell model kits from the Roth, I usually think of Surf Fink as my favourite then I remember Superfink is on a motorized skateboard and suddenly I’m not so sure. The Mosnter 500 site is still currently up and features a bunch of racers who never made it into toys – ah sod  it, I’ll stick ‘em here in case/when the official site goes down, meet the racers you can’t buy as toys:

These were supposed to come out in 2015 *sigh* looks like I shall never own Creature from the Track Lagoon, you suck children of today!

So far only one other Leaguer has posted as of this writing:
Green Plastic Squirt Gun makes me want to rewatch Ruthless People and Mac & Me
I’ll add some more when there're more to add