Load the ship Lex Express up with the rocket fuuuuel 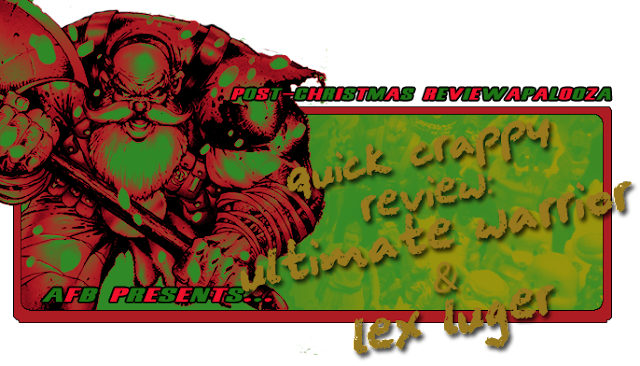 Vince McMahon likes big men. I couldn’t have made that sound gayer if I tried but it’s true, the owner and chief mad bastard of the WWF/E likes really big blokes, when his favourite really big bloke – Hulk Hogan – stopped appealing to fans and then fucked off to make films then wrestle horrible matches at WCW and stopped making him ridiculous amounts of money, Vince McMahon pushed a series of really big blokes on fans as a replacement for the Hulkamaniac, failing each time until actually finding his next Hulk Hogan by accident in the smaller bloke (by Vince McMahon really big bloke standards anyway) Stone Cold Steve Austin. Today’s exercise in quickly and crappily reviewing some toys features two of Vince McMahon’s really big bloke flavour of the month wrestlers –  the Narcissist Lex Luger and the homophobe Ultimate Warrior and this is the most Whatculture Wrestling intro I’ve ever written, oh Adam from Whatculture.com - be my wife. 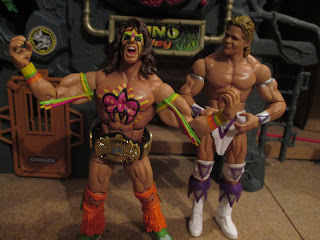 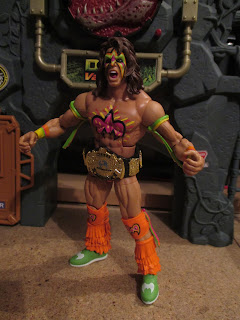 The Ultimate Warrior was played by the late Jim Hellwig (though he later officially changed his name to Warrior), who wrestled as The Dingo Warrior in WCCW before joining the WWF in 1987 and becoming ultimate. There he infamously took The Honky Tonk Man’s Intercontinental Championship in 27 seconds after Honky had held it for a record length (haven’t forgiven him for that) and became World Heavyweight Champion after beating Hulk Hogan at Wrestlemania VI in one of Hogan’s best matches and wore the outfit that this figure uses. Warrior walked out on the WWF in 1991 after Vince McMahon suspended him in revenge for the Warrior holding him up for 550 grand or else he wouldn’t perform at the 1991 SummerSlam pay-per-view. He came back in 1992 but didn’t last very long either as it was when the WWF was being investigated for steroid use and he was using either steroids or human growth hormone or both, he then came back for ANOTHER time in 1996 but left pretty soon again, this time because of an argument over the use of trademarks. Warriors death is…noteworthy, after years of being estranged from the company (and being utterly awful on WCW) Warrior was inducted into the WWE Hall of Fame on the Saturday, appeared at Wrestlemania XX on the Sunday, spoke on Raw on the Monday, then died on the Tuesday. He now has an award named after him. 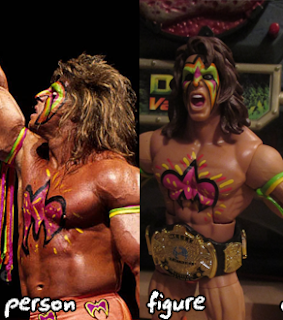 When I was a kid I though the Ultimate Warrior was the shit, I had his Hasbro action figures and they always beat Hogan and Savage (though not Jake the Snake, let’s not be silly) and you could even beat him up on Streets of Rage! But then I inevitably grew up and came to see the man behind the face paint, a homophobic abilist madman with absolutely no grasp of logic or reality and who wasn’t even that good of a wrestler, it did present a little conflict when buying a collector’ figure of him, on the one hand I knew my shelf would never be complete without one but on the other even recognising the difference between performer and character he was still a rampaging prick. This figure decided things for me, much like Ric Flair did with whether or not I’d start buying WWE figures again as a whole and for exactly the same reason – it looks so much like him, and like Alice Cooper. Seriously, I can’t be the only one to notice that Ultimate Warrior looked like a ‘roided up Alice Cooper right? The face sculpt is fucking perfect, it’s great from the front, even better from the side and spot on from a distance or close up, and without a man to scan this is all on the sculptor and whoever you are mate, you rock. There are nitpicks but these are few and far between: he needs bigger biceps; they’re still painting on sweat bands when they should have pieces with them sculpted in by now and mine has a large gap at his right thigh cut. His chest paint isn’t even ruined by the ab crunch (an essential articulation point for the Warrior) that much, only when ‘crunched’ at its furthest extremes (it’s carried on up and under the peck piece, which is fully appreciated). His crotch articulation is slightly blocked by his bum but I’d rather that than no bum at all and it’s made up for by his knee artic being almost completely unblocked by his knee pads. His paint apps are superb; his face paint is as crisp as the best apple you can imagine. Really my only other observation is that his hair really looks like chocolate and it makes me hungry for Choc Dips. 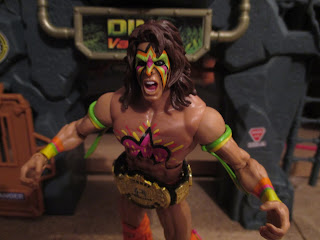 Warrior also comes with an accessory (gasp!), a World Heavyweight Championship Belt, the ‘big eagle’ belt, it’s very nice and Steve Austin will greatly appreciate it but my… peculiarities leave it making me feel a little sick, it’s also nice to know that technology has advanced a little since 1989 because this was much easier to attach than the Turtles’ old belts, though it does still use the same system. 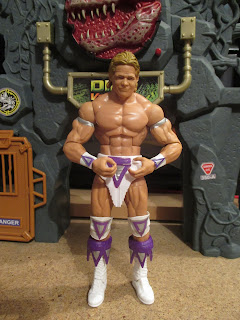 Then there’s Lex Luger, who’s an odd one, played by Larry Pfohl he’s held all the biggest belts in both in WCW and the WWF, put on some great matches, been a member of the Four Horsemen – perhaps the greatest stable in Wrestling history – and even got with Miss Elisabeth (though that didn’t end well) yet he has virtually no respect in the fandom. I blame the WWF’s attempt to push him as the next Hulk Hogan in 1993, which was just after the time period this figure represents. Hell I don’t like Lex Luger, when I eventually write about my favourite wrestlers this man’s name won’t be anywhere near that whole body of text, unless it’s to bring up him aging into an exact likeness of William H. Macy because I seriously cannot stress that enough, it’s uncanny. What I do like is Lex Luger’s 1994 Hasbro action figure, which was simply one of the best done in the line with these great (and complex) metallic silver and purple paint apps. Funnily enough this is the WWE Elite figure of that same costume, and it still looks as sharp. To actually give you a proper account of his WWE career: he joined the promotion in 1992 (actually first signing to be part of the massive failure that was the World Body Building Federation) as a heel under manager Bobby Heenan before the aforementioned and failed ‘push’ as 1993’s Hulk Hogan, fans didn’t take to him and McMahon bottled it and switched to Disel, another really big bloke By 1995 Luger was feeling unfulfilled and underused (because he was) so jumped ship to WCW and appeared on the first episode of their new flagship WCW Monday Nitro programme, something Vince McMahon and the WWF knew nothing about (he’s been at a WWF show the previous night). Luger was actually totally within his right to do this too, as he’d been wrestling for months without a contract. 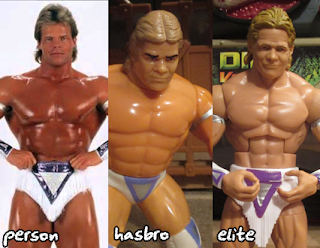 So the figure then, Mattel uses a ‘buck system’ for their WWE figures, they have a selection of parts available and mix and match them, only sculpting and tooling (making expensive metal moulds for) new pieces as they need them, usually heads and the occasional piece of clothing like Lex’s trunks and the diamond bits for the top of his boots. Sometimes this works really well, sometimes they’ll choose just one piece that looks a little wrong (like with Warrior up there and his biceps) and sometimes it’ll fail to replicate the body of the person completely. Here they’ve completely succeeded and the buck parts give us pretty much an exact match for Luger’s body in his prime (his tits are a bit off but they’re the right level of toned and yes I did compare the pecks of Lex Luger). I do wish Mattel would stop painting things that should be sculpted, I can understand it when it’s on a large piece like the upper torso, that’s expensive shit, but on the forearms or biceps it really just seems cheap, still you can’t tell from a distance I guess and I don’t plan to get too close to Luger ever again. Mine has some paint mishaps, paint’s been pulled off of the left knee and the left side of the trunks on both back and front, (is trunks still appropriate here, or should it be loin cloth?) it doesn’t appear to be the packaging but rather something that happened at the factory, as far as I know it’s not a widespread problem and otherwise paint is sharp and impressive, I especially like the attention to detail around the hair line. Onto that, the best bit about this figure is easily the head, Mattel’s sculptors really are getting good at this (even most of the girls’ likenesses are decent these days) and it makes it harder and harder to pass up wrestlers I don’t really want. Luger may look EXACTLY like William H Macey now but back then he had a different – but wholly distinctive – face, the best way I can describe is if someone took Sam Neil and squished. I’ve noticed a lot of older Luger figures try to downplay his weird-ass face and make him look more handsome, I’m sure it stroked his ego nicely but why would I want this? I want Luger to look like Luger, even if he is fugly. This head is great at capturing the man in all his squashed Dr Grant gory, it’s especially good if you tilt it up a little. Speaking of which his luscious locks will hamper the head artic and the bum blocks at the crotch but neither are particularly upsetting; in fact he’s quite the flexible fellow otherwise. 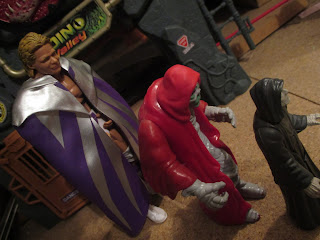 And he has an accessory too! His cape (which he comes packaged out of so I’m counting it as an actual accessory) but I kind of wish I hadn’t started another paragraph because I don’t have much to say about it. It’s nice enough, the paint’s as good as it is everywhere else on him, it is shiny and purple and those are two things that’ll make me like anything but I don’t think he’ll be wearing it when on display, I’ve mostly just had him wear it and quote The Emperor from Star Wars, this amused me for far longer than I think it should have. 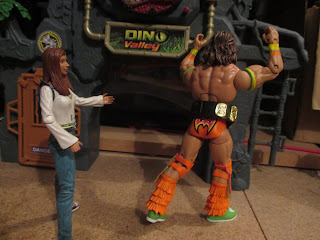 Conclusions? Totally worth owning, these are the best figure I’ve seen of both men and Lex Luger is on offer everywhere and will probably never be full price again, you have no reason to not own these, well unless you quite rightly think Warrior is a knobhead and Lex Luger is a nothing of a wrestler.
Posted by dwitefry at 02:47