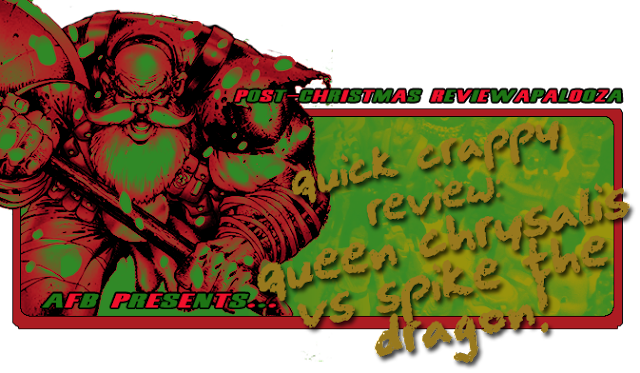 Is this quick crappy review my Brony coming out party? No. 1) it’d be a really crap party, such a thing would deserve at least nibbles and I have no nibbles; 2) I don’t consider myself a Brony because I’m way too casual a fan and 3) I’m a rotten pony hipster and was a boy who liked ponies before it was cool and so I was out for years before the word ‘Brony’ was even invented. I’ve mentioned elsewhere that I had a lot of girls toys as a kid (I’m sure my mum wanted a girl) and a spattering of G1 My Little Ponies was amongst them (including Applejack) but my major expression of fandom was watching the cartoon every morning at Centre Parcs, who used to play it as pretty much the totality of their kids programming back when they limited their TVs to just their own channels – my Grandad hated it, which just made me even more inclined to watch. My selectin of Pony merchandise though is very small; with my old G1 girls long gone it totals, I think, a Fluttershy action figure (she’s my favourite), a random G1 dragon, a cuddly Rarity a friend won me on a UFO Catcher and this set. I have more Darth Vaders than that. 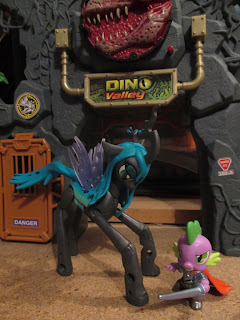 The Guardians of Harmony line is pretty much ‘My Little Pony for boys’ and the action figures, because that’s what they are, are being tailored to the periphery demographic that may well now be the main demographic: post pubescent nerds. The first wave includes fan darlings like Cheese Sandwich, Nightmare Moon, Tank and The Wonderbolts ahead of members of the Mane Six (Rarity, Applejack and Fluttershy seemingly being held back for a second wave) and they come with things like articulation, plastic hair and cartoon accurate likenesses. This was the only set from said first wave that I HAD to have, though I’m wavering on the Nightmare Moon release because it just looks that cool. 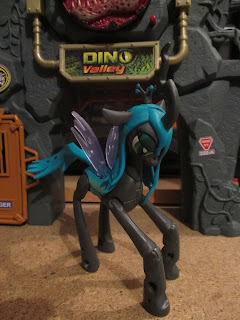 So this is called ‘Queen Chrysalis vs Spike the Dragon’ but that seems to me to just be a way of justifying charging you extra for a pack-in figure and really should just be called ‘Queen Chrysalis’, who happens to be my favourite My Little Pony villain. She’s a magical pony-like being born from a carnivorous flower (yeah…) who rules the Changelings, who are also magical pony-like creatures and like Chrysalis can shape shift. She debuted in ‘A Royal Canterlot Wedding’ - the two part finale of My Little Pony: Friendship is Magic season 2 where she tried to marry Twilight Sparkle’s brother Shining Armor (also available in the first wave of Guardians of Harmony) and take over the world (of course!). Since then she’s appeared sporadically, most notably in the season 5 two parter ‘The Cutie Re-Mark’, the season 6 two partner ‘To Where and Back Again’ and the first four issues of IDW’s My Little Pony: Friendship is Magic comic book. She also received her own one shot as part of the My Little Pony: Fiendship is Magic micro-series, what’s a micro-series? Oh it’s just a series of one-shots, sometimes with a unifying title, no there’s isn’t a good reason why they shouldn’t just be a mini-series - IDW fucking loves these. 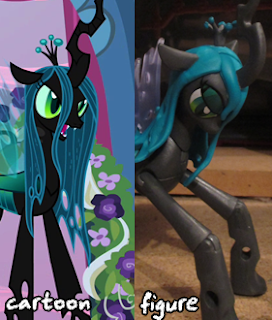 Sculpting is pretty much spot on, in fact It’s so good it’s not left me with much to say, her head might be a bit small but the sculptor’s done a fantastic job of translating a design tailored specifically to 2D animation into a 3D figure without the character looking off from the side, that is she looks 2D from the side and 3D from the front, like in the cartoon - I can’t imagine was that easy. I appreciate the transparent wings, not just because I like transparent things (I so do) but because little things like this make the figure feel like it has that little bit more prestige that Hasbro want for the line. Now let’s talk about action features! I love action features, I grew up in a very action feature heavy time toy-wise so I’d be completely lying if I said that nostalgia didn’t play a part but they also add so much play value and make the toy feel so much better value – I don’t want them on the adult collectors’ figures where accuracy and poseablity are key but for toys aimed at kids and heading for your average Toys ‘R’ Us? Pile those action features on. Yeah, I know some people are seeing these as the ‘adult collector’s ponies’ but Hasbro seem to be positioning them in an in-between place, this may ultimately hurt the line but it means I can be happy Queen Chrysalis here has an action feature.  It’s a really action featurey action feature too, one where you can see the logic behind it but the process of realising it in toy form makes it seem really odd; in this case you can slot…well they’re supposed to be energy I think but they look like neon green steering wheels, you can slot these green steering wheels into her horn and ping them at other toys using her neck – that’s mad and brilliant. They don’t have a lot of power behind them sadly but I was able to whack Spike with them so it’s sort of a success? It does mean that she hasn’t got any neck or head articulation so she’ll forever be looking slightly down. Actually articulation’s the figure’s real weak spot; her front legs have two ball joints apiece one at the ‘hip’ and one at the knee, and her wings are on ball joints also, but her neck and tail are sprung for flinging and her back legs only have swivel joints at the ‘hips’, that could possibly be a case of choosing aesthetics over articulation and if so I can get behind that but some knee joins back there wouldn’t have hurt; it doesn’t give her a lot of poses she can achieve while having her back hooves on the floor, you remember when you used to stand on the sides of your feet? All kids, teenagers and fans of Indie rock do that - she looks like she’s doing that in most poses. 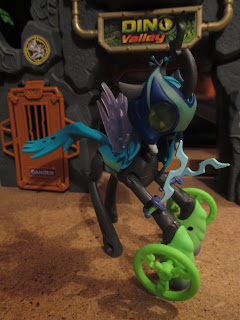 Chryssie is loaded with accessories and best of all – they can all be stored on the figure, at once. She has: a mask taken from her Fiendship is Magic special - it’s ok, I wasn’t quite sure who it belonged to (her or Spike) at first, the eyes line up nicely with the goggles; two energy steering wheels that can attach to two neon green leg warmers (is I meant to be fire? Energy? Socks?) and make her look like a demented evil horse shaped wheel barrow; two daggers that attach to her front legs, I personally think the look fucking stupid and stick out like bollocks on a bulldog but they work ok and match her design nicely, and Spike. Oh the set also includes a badge, badges make me feel sick, I don’t like touching them, I don’t like wearing them, I don’t even like looking at them that much, here’s a picture of it in the packaging: 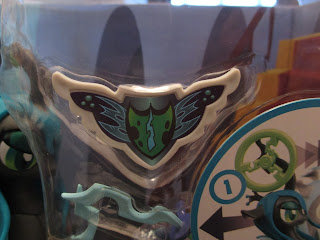 Now it’s going in the bin and is never to be spoke of again. 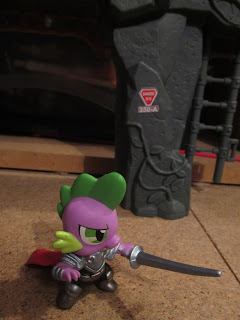 Spike then, Spike is a baby dragon who lives with mane character Twilight Sparkle, he’s less her pet and more her constantly suffering assistant, he’s got a massive crush on Rarity, eats gems and is just all ‘round wicked, he was my favourite in G1. I don’t care what the box says, Spike’s an accessory but what an accessory! Spike is dressed in mounting armour and brandishing a lance, I can’t say I ever remember him dressing like this in any of the cartoons or comics and my brief googling didn’t turn up anything either but I’m having a hard time caring because  he just looks so adorable and badass, badassorable? Adorabadass? Badassorable, he looks badassorable. He has no points of articulation which is pretty much par for the course for Spike (has he ever had an articulated figure? Ever?) but it’s further reasoning for me to not accept this as a two pack. I’m actually not one of those ‘everything must have 21 points of articulation or it sucks” kind of person, especially not with toys for mass retail but he’s easily big enough and chunky enough (sorry Spike, I’m not saying you’re fat mate) to accommodate swivels at the neck and waist and ball joints at the arms so giving him no articulation at all does smack of cheapening out. Still he’s well pained and sculpted and I shouldn’t complain too much because I didn’t buy the set for Spike (I’m totally keeping him because it’s Spike in armour ready to fuck you up but he played no part in my decision to buy this product) and complaining too much about a nice bonus is a bit dickish. Still (again) people might be buying this for the set as a whole and not because they a massive fan boner for one half of it and it was priced and labelled as a two pack. Oh the line does include a regular version of Spike, but that comes in the Spike the Dragon set which is the big ticket item for this wave, god didn’t they put him with a vehicle as well? A balloon? Why do Hasbro want to make it so expensive to own a Spike? 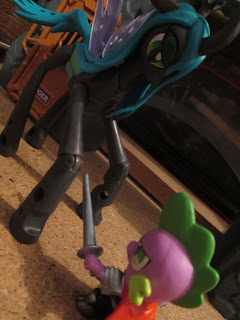 Thus we reach the shitty conclusion paragraph: I’m completely satisfied: I got a good looking toy with a big lot of accessories and Spike the Dragon in armour for less than a Star Wars Black figure, I appreciate the action feature even though I think most won’t, could have done with a bit more articulation but really the only big complaint I have is that my Queen has some excess glue above her left eye, which I will scrape off next time I’m feeling brave and when my cold’s gone, I wouldn’t want a stray cough to result in me poking a pony’s eye out. 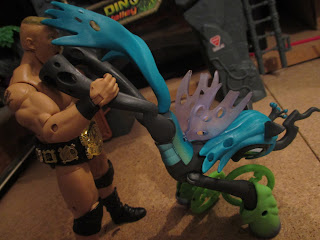