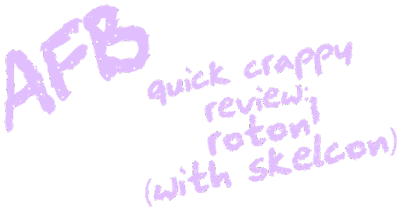 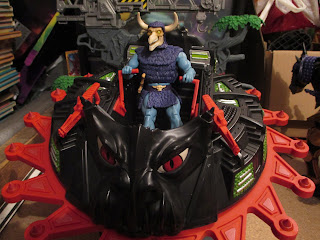 The Roton is a small flying vehicle used by the Evil Warriors (Skeletor’s mob), according to the bio that came on the box they were built by the pirate Ditztroyer who double crossed the Evil Horde and gave the Evil Warriors the design, which makes no sense as the vehicles were in use before the Horde came back to Eternia and thawed out Ditztroyer - if I’m getting my MOTUC timeline correct anyway (the Filmation stories should be before the She-Ra FIlmation stories which should be before the Horde returned to Eternia right?). Out-of-cannon the toy debuted in the third wave of Masters of the Universe toys in 1984 and was the first vehicle for the Evil Warriors. The fist mention of it comes from the He-man story bible (’82) where it was a heroic vehicle and the earliest design we have for it is by Ed Watts, who also designed the Dragon Walker and Battle Bones (and some of the best unproduced items – including the Torton and Turbosaurus). The Roton is my favourite vehicle in the Masters of the Universe or Princess of Power lines, something about its 1980s VHS colour scheme and angry cat face have always spoke to me in ways the Attack Trak of Battle Ram never did, the Land Shark and Bashasaurus are close runners up by the way.

Fuck me this Roton is huge, it didn’t look this big at the convention, in fact it’s too big, at least when compared to the original toy.  The original Roton is a small one seater craft – little more than an armchair surrounded by a ring with red bits on it – this beast is a lounge chair set inside a mini-roundabout, it looks incredibly comfy and I can imagine that if it was attached to a deluxe version of After Burner II it would be a delight. It has been shown to be this big in say the Filmation Cartoon or the odd Earl Norem painting and I’m guessing that the Four Horsemen just chose the bigger size of aesthetic reasons. Personally I’d’ve preferred they went with the smaller size and the Roton retained the ‘sporty little number’ feel the original toy had, that felt manoeuvrable and nippy, a step up from the Sky Sled but not quite a Wind Raider, this feels like it could ram the Wind Raider and write it off – in fact I think it’s nearly as big as the vintage Wind Raider. That bitching aside the thing is a bloody amazing piece of sculpting and painting, if you’ve bought any of the other vehicles everything that was good about them returns and in many respects has been ramped up – the detailing, fusion of animal elements and little ‘paint’ details for instance. The main body of the vehicle is cast in mat black plastic and then selected areas are painted in shiny black plastic achieving this thing where you don’t even notice half of the paint apps but know that if they weren’t there, you would totally notice they weren’t there. Likewise the rotating blade has been given little metallic accents in two different shades of red, oh and each of the spikes turn – why do they did they feel the need to do this? Fuck knows but it’s quite fun to twiddle them. By the looks of it the green panels, main control panel and those two silver air vent like things either side of the seat are separate pieces, cast in their respective colours and then glued in which just makes things look that much more crisp (and probably saved a lot of money on paint), apparently the fine detailing on places like the control panel is achieved by decal1 rather than paint apps, at least this was true for the Wind Raider and this looks the same to me. As such the whole thing ends up being very subtlety detailed and I like that, I’m incredibly impressed with the clean, hard edges everywhere, how do they do this? Do they like us metalwork or bits of wood? They surely can’t make it all out of clay and shit right? Oh and it only bloody retains its action feature, dunnit? Push it along and the red ‘blade’ will rotate with that nice smooth but chunky feel the original had, it even makes the same noise. Criticisms other than size? Well I don’t know why it has ports for four guns but only comes with two (and the Roton has only ever had two guns), they don’t seem to be on the prototype (which I still say looks smaller) and I can’t imagine what purpose they serve other than shifting the guns slightly back for…I dunno, personal taste, if you manage to cram two figures in? I dunno. Also the nostrils are separate pieces glued into the front – why? 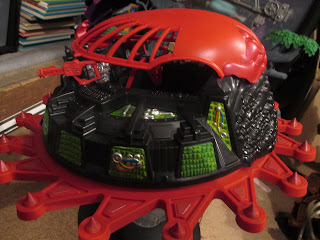 The vehicle has accessories – I imagine Stratos is fuming - it’s stand and it’s canopy. The stand is reused from the Wind Raider and if you can’t tell from my photos, really shows your fingerprints, mind you I am a greasy unwashed bastard. It has a big stiff joint that looks like a ball joint but HA! fooled you it’s actually just a hinge, it allows you tilt the vehicle forward which I appreciate but doesn’t really allow you get many poses, a ball or simply a swivel to allow for side-to-side movement would have been preferable. The canopy then: as far as I was concerned if they were gonna make a Classics Roton they had to include the canopy, no ifs, not buts, they had to do this. The backstory of this part is that after Masters of the Universe came out and made it big, Monogram licenced three of the vehicles and made model kits of them2 – they made the Attack Trak, Talon Fighter and Roton but worked from prototype designs so their eventual models were a little different, the most readily apparent difference being the Roton had a canopy. The Classics version of the canopy is very nice, it’s a shame it’s not hinged but it slots in nicely via four small and very discreet plugs and looks snazzy, I realise that I took far more words to explain the history of the thing than I did to review it, welcome to nerdom. 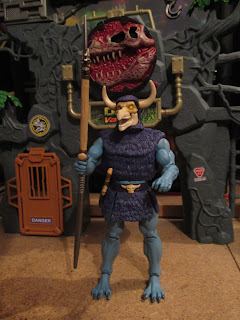 The Roton’s my favourite vehicle yes, but I don’t think it would have been the ‘instant buy’ it was if it didn’t come with a Skelcon. I would have WANTED the Roton and umm’d and ahh’d and probably given in and bought one in the end but by including a Skelcon Mattycollector got me to ‘pull the trigger’ (another term I hate, I hate so much) straight away. So who or what is a Skelcon? According to the bio included on the package, they’re a race of death obsessed savages from the dimension of Infinita3 who were mind-controlled into serving Skeletor before Hordak sent them back. They appeared in the Masters of the Universe books produced by Ladybird where they were just Skeletor’s forces and were just there, but the look so cool and fans jumped on the ‘Skelcon 4 Classics’ wagon based almost entirely on that alone, that and Skeletor had no standard army builder like the Snake Men or the Horde Troopers, he had his Robot Knights in some episodes of the cartoon, or the Skelcons in some of the Ladybird books. 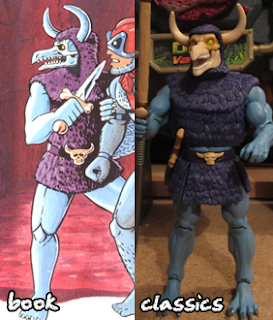 For me the Skelcon represents everything that Masters of the Universe Classics under Mattycollector was and thus he’s a fitting end to their time with the line – drawn from the entire brevity of the franchise, heavily reliant on part reuse, well sculpted, slightly overpriced and with one little flaw to grab ahold of. Parts wise he’s the standard He-man buck with his extremities taken from elsewhere – his forearsm are from Oo-La, his hands from Skeletor and his shins and feet from Demo-Man, this means he lacks the ‘boot swivel’ artic point, his ab crunch is also severely limited by his ‘armour’ piece. Yeah, his clothes, and that ‘one little thing’ – you can see his belly button, and you can usually see part of his neck; what he’s wearing is supposed to be a one-piece hooded tunic, you shouldn’t be able to see these things. Now these buggers are so weird I can buy it them dressing with their mid-drift on show so it’s not as galling as it was with, say, Intergalactic Skeletor but it’s there and it could have easily been avoided by making the body part of the tunic all one piece (so giving him a ‘dress’) and painting the neck purple – the ab crunch is so blocked it wouldn’t have any effect there, in fact it might have given it more range. With that out the way, Skelcon is one scary creepy motherfucker, this sort of shit is the Four Horseman’s forte and they turn in a wonderfully creepy head (that’s cream bone rather than white because MOTUC hates white), it looks like the jaw should be articulated but ha! surprise! It isn’t but ha! surprise! The horns are, they’re on swivels and that’s just fantastic. You can get extra expressions with it, you can personalise your Skelcon a little, and really there’s no reason why they shouldn’t be, they have to attach somehow, it’s not like this sort of joint costs more. 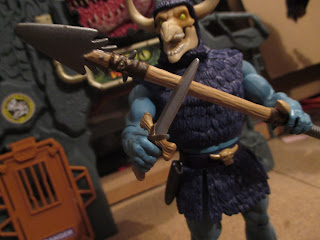 Skelcon comes armed with a spear and dagger made from the bones of his dead ancestors (really). The dagger is straight from the books and I THOUGHT the spear was too but I can’t seem to find any proof of that, so for now I’m going to say it’s just a nice thing the Four Horseman whipped up, the Skelcons do look like they should have spears don’t they? Both accessories have issues fitting on the figure though: the spear is too wide for one hand and too thin for the other, at least with my figure while the dagger can be stored on the figure in a scabbard (a nice thought) it’s a VERY tight fit, there is a horrible phrase involving the reproductive organs of nuns that applies to it nicely, and once in it’ll get in the way if you try to move him at the waist, bit of a failure but both to look very nice and both have a very generous amount of paint apps, I imagine Blade is fuming. 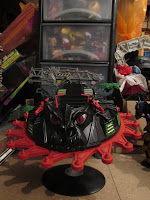 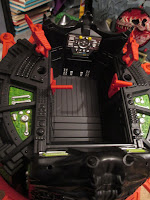 Conclusions: this was a $125 set meaning that, effectively, that Roton was $100 which is about £80, maybe a little bit overpriced but not by too much, especially as it’s a small run, online only item, it’s big, it’s insanely well sculpted and painted, it has its old action feature and even though it’s a bit too large for me it’s fucking awesome. The Skelcon is wearing a slightly more revealing version of his outfit than usual but is otherwise fine, now I’ve jammed his spear in (sexual innuendo?). I don’t regret buying this set and that’s the main thing really, now where the hell am I going to put the bloody thing? 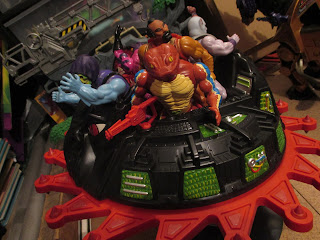 1 Think of it as an up-market rub-on transfer, I do.
2 This is also where the Classics figures called the Fighting Foe Men come from, they appeared on the boxes and were usually called the ‘Monogram drivers’ or ‘Monogram Riders’ before Scott ‘Toyguru’ Neitlich (I think) gave them a name from very early in He-Man’s development (around the time of the Vikor drawings).
3 Skeletor was originally supposed to come from Infinita, and then I think it was that he went to Infinita as Keldor and came back Skeletor (or something like that?) so it makes sense that a race of blue skinned skull faced men would come from there, in fact for the ‘standard’ race of Infinita they’re a perfect fit.
Posted by dwitefry at 08:39