It's the first of October! it's Halloween Month! Woot! 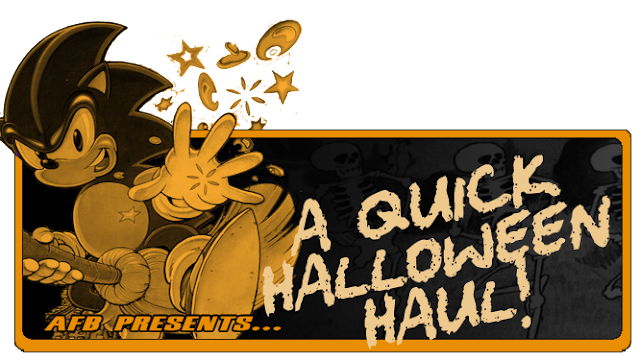 Just in case someone from the UK stumbles across this before Halloween 2017: Poundstretcher’s Halloween stock is immense!
Imaginary readers from the UK should hopefully be aware of Poundstretcher even if they’ve never shopped in one, for the imaginary US readers: it’s a slightly more expensive Dollar Tree. It is not known for its quality stock, it’s known for cheap sweets and ugly crap (though to be fair to Poundstretcher I did get most of my Bandai Thundercats figures from one). Today I went to a Poundstretcher because I’m a good son and even better grandson and my mum and nan needed someone who can lift more than a bag of flour – it was so worth it. They only have half an aisle dedicated to Halloween in our Poundstretcher but they have crammed so much good shit into that half an aisle. Of course all of it is still cheap and ugly but that’s totally ok when it’s Halloween, all their cute stuff is cute and all their scary stuff looks like it’s nicked from a really low-rent Ghost Train and that is brilliant. Of course I forgot to take a picture of their display because I’m not very good at this blogging lark even after two years at it but no one reads this stuff so it’s not that important. I did take pictures of what I bought though. 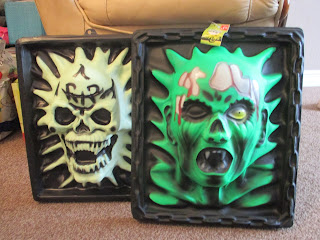 Wall Reliefs!
Can you believe these are the only wall reliefs I’ve found this year? And they were in fucking Poundstretcher. Why the sudden drought of wall reliefs? What could you all possibly have against them manufactures? Wall reliefs kick arse. Nothing says ‘the homeowner has taken their entire inspiration from a ghost train they went on when they were four’ like wall reliefs! I’m doing our Halloween gathering this year and as it’s only a gathering with only about 12 people coming I’m not going all-out and creating an immersive environment (I have done this before) but instead going for ‘Halloween tack’ and these are perfect for that.
My photography skills are pretty piss-poor today (I’m not well) and I apologize to everyone reading this but I’d like to especially apologize to the zombie relief because this picture really doesn’t get across how lumo green his ass (well, head) really is. I’m pretty sure he’s blacklight compatible and yes I do happen to know someone who randomly owns a blacklight, why wouldn’t I have access to a person who just so happens to have one in one of their draws? I’m really not a big zombie fanbut I’m making an exception for Zombie John here, he’s just too damn green not to. I AM a big fan of skulls though and Undead Fred is a skull-shaped revelation, he has R.I.P. carved in to his head and vampire fangs AND he glows in the dark, these cost £1.99 each, such greatness should not be so cheap. Am I being a bit hyperbolic? Fuck it I’ve been looking for wall reliefs and two I found are cool so eat my hyperbole and like the taste. 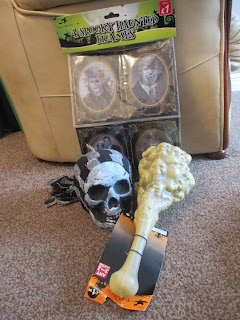 Cool Shit!
Arguably everything in this photo is better than two cheap wall reliefs but those ‘4 Spooky Haunted Frames’ (it’s their official name) are debatably the best thing Poundstretcher is selling this year. You get four for a pound and they’re all winners, what does it for me is that two of them (the medusa and the bride and groom) recall the changing portraits in the Haunted Mansion and any Halloween decoration that recalls the Haunted Mansion is an instant buy, though the old boy next to Medusa becomes a fascist vampire and that’s two completely different types of horrific revelation in one so lots of props for that. The Pirate Skull is a Pirate Skull and Pirate Skulls are never uncool, especially when they cost £1-something , never pass up the chance to buy a Pirate Skull and increase your awesomity. The club is just for me, just for around the house like, I think it looks like it’s made of teabags. 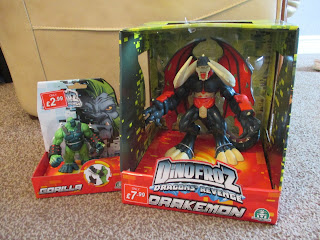 Dinofroz!
And what could top off buying great Halloween goodies better than finding a new monster toy toyline? Ever heard of Dinofroz: Dragons’ Revenge? Nope, me neither - but that’s just because we’re not Italian. Wikipedia tells me that Dinofroz is an Italian kids media franchise masterminded by Giochi Preziosi, an Italian toy company that’s and old the hills (well it was founded in 1978 so it’s less ‘old as the hills‘ and more ‘as old as Give ‘Em Enough Rope by the Clash’ but whatever, it’s been around for ages) and who’re probably mostly known today as the people behind Gormitti. Apparently it’s a Yu-Gi-Oh style thing built around a card game and a cartoon that dates back to 2012, as I actually said aloud ‘they remind me of Yu-Gi-Oh but in a good way’ to my mum (who really couldn’t have cared less) when I was buying them I shall now feel a bit smug. I scanned Gorilla’s cardback so you can believe me when I say Drakemon was objectively the coolest character in this wave: 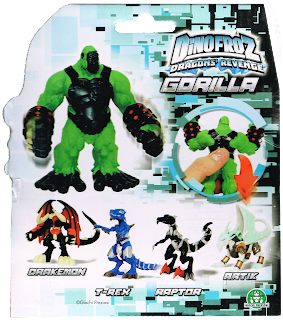 Tell me I’m wrong, I’m hoping he’s some kind of uber tier big bad Mega Rayquaza meets Prime Evil level supervillain but he could just be Charizard for all I know. Drakemon and T-Rex are available in Drakemon’s 7-inch scale and all four can be found in Gorilla’s 3 ¾ inch scale, plus according to this all but Artik are available with a bunch of others in a smaller scale still. 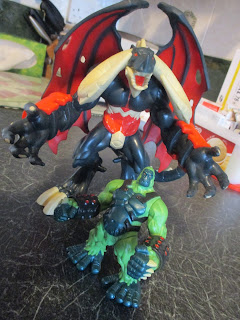 Gorilla’s as sweet as a brussel coloured giant ape in gauntlets can be and he has a nice fist-pounding action feature via a big lever on his back. Drakemon has no action feature because if you’re that cool you don’t need one I guess, he does have a hinged jaw though which actually makes him better than many collector’s figures. He also has a lovely design on the back of wings that mixes Mulan and Monster High, so he’s quite the stylish hell lord all ‘round and proves that Giochi Prziosi didn’t skimp on the detailing, that makes him better than half of Playmates releases since 2010.

I’ll be honest, I dashed this out quick and with no forethought, I’m pretty sure it shows. I haven’t had the urge to blog about something (or an urge to do anything) for a while so when I did have at least half an urge I got a bit excited. So I haven’t got a conclusion, thanks for reading, sorry it was a bit shit.
Posted by dwitefry at 03:54