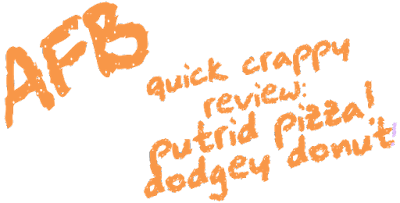 I had a bit of a shopping spree: 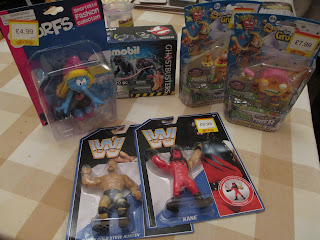 It was nice, nothing cost that much and all of them brought more satisfaction than any three toys in the store that cost three times their price could/would and you know what’s great? They all (just about) fit October’s Halloween theme – we’ve got mutants, Ghostbusters and Kane, who’s pretty much the wrestling equivalent of Jason Vorhees. So whatever I review I’m good but I’ll be honest I have no idea how I’m gonna review Playmobil or Hasbro style WWF figures so we’ll just deal with the straight-up action figures, I can do that. 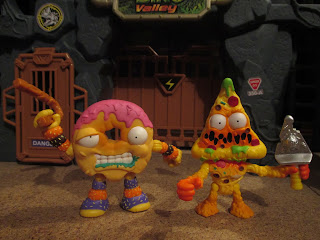 Meet the Grossery Gang Putrid Power Action Figures. My knowledge of Grossery Gang before today (whereupon I did some customary research for this post) was that they were one of various bling bag lines that had risen in the wake of the success of Trash Pack, cool but too vast for me to get into when I hadn’t finished my collections of the mini-figure lines that made my childhood a delight yet let alone start on modern lines like Trash Pack or Fungus Amungus or those M.U.S.C.L.E. like alien wrestlers (I forget their name). Turns out they’re produced by Moose Toy (who also make Shopkins and the Ugglys Pet Shop) and are a direct spin-off from Trash Pack that’ve been on sale since last year (2016). My interest in the line was only piqued after the tweets starting making the ‘rounds about their new Putrid Power figures and specifically the characters Putrid Pizza, Dodgey Donut and Fungus Fries (Fries isn’t out yet), why? Well do they look a bit similar to you, like you’ve seen them before? Or you remember them even though they’re new? I don’t think we’ve got any actual confirmation on this but the whole internet has pretty much agreed that if these aren’t direct homages to Food Fighters (specifically Private Pizza, Major Munch and Fat Frenchie) then they might as well be and coincidence is a marvellous thing. 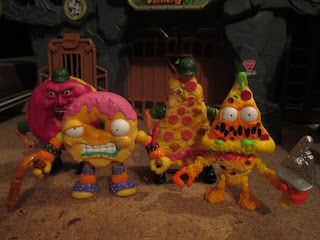 I cannot stress my love of Food Fighters enough, their bizarre concept, their flat out awesome characters, the fact that they’re pretty much dog toys kids are allowed to play with all just make them utter gems to me. So like many others the merest whiff of a tribute, or even a similarity, was enough to make me buy ‘em, it’s taken a little while because the Food Fighter-esque figures have been sold out everywhere I’ve looked, with only the non-Food Fighter-like figures remaining, unloved and unwanted because they didn’t recall a cult-favourite toy line once sold for about a dollar fifty but now I’ve got ‘em so you get my two penn'orth as well, lucky you. 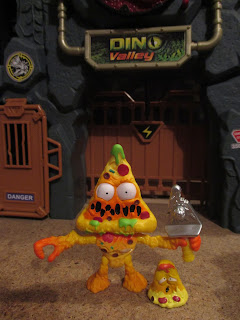 Putrid Pizza was the one of the three I was least excited about getting, simply because he’s such a radical departure from his Food Fighters equivalent (Private Pizza) and I couldn’t figure out why you’d want to avoid a pepperoni eye patch on your pizza man? Now I have him though? I fucking love him and I shall tell you why: while playing about with him I realised he as effectively Food Fighters and Toxic Crusaders combined, that made me like him, but that thought also lead onto the realisation that had Food Fighters been released (or revived) in the 1990s, Putrid Pizza is what they’ve looked like and that made me delighted. Putrid Pizza is effectively filling a whole in my childhood I didn’t know needed filling. He has everything I liked about the 1990s toys I grew up with – detailed and skilled sculpts, bursts of neon paint, whacky themed accessories and actually pretty decent articulation, sure it’s all nostalgia but it’s also all there on PP here. 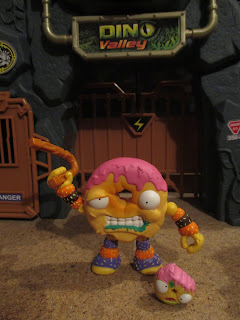 In comparison I have very little of note to say about Dodgey Donut – possibly because his appeal should be self-evident in the photos: he’s a barely sane doughnut man wielding a nunchuck and drooling slime. I greatly enjoy that his gauntlets/socks are made up of icing and they sure do look and feel like what they’re supposed to be, I wonder if they moulded icing? That sounds messy but worth the effort. DD has a more modern look all over really, and a more realistic feel to him, PP has some damn fine sculpting that really does look like burnt cheese (I want to chew it) but he’s still blasted in various Toxic Crusaders neons whereas the texture and little paint apps on DD make him really look like a doughnut, I want to eat him and don’t feel bad about it. On another note but one related to DD as it’s more obvious with him: these figures are small, technically they’re 3 ¾ inch scale but they’re such bizarre proportions and such a variety of proportions that they seem a lot bigger than they are, this ‘seems better than they are’ carries over to the articulation, there isn’t much there – PP has five joints and DD only four (because he has no neck, being a doughnut) but they’re all ball joints or close facsimiles thereof and all the limbs get a great range though PP’s head doesn’t, it’s less of a ball joint and more of a wobble joint but it’s still a ball joint, it still gets more range than a swivel joint and still makes the toy feel ‘better’ than five points of articulation would feel if they were only swivels. 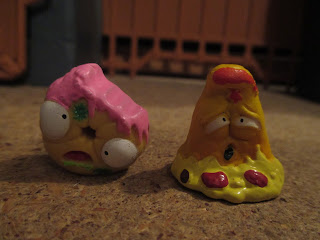 Each figure comes with an exclusive Grossery Gang mini-figure – which is a damn sensible idea as far as I’m concerned, it takes the figures from an optional extra to a must-have extra for collectors of the main line – from what I can figure out these are technically the ‘pre-transformed’ versions of the figures, at least for these two. This is the first time I’ve ever handled a Grossery Gang mini-figure and…I don’t like it, they feel like wet cake. I suppose this could be intentional, they are after all supposed to be gross – it’s in the title – but they feel too soft and too wet and I’m sure they’ll degrade over time (and if that’s the case then I can’t understand why any toy company would choose a material that degrades for a toy based around collecting). Aside from the feel though I think they’re adorable and work as a nice counter to their mutated forms, instead of a fearsome pizza and a deranged doughnut we have a sad little pizza slice with all his cheese fallen to the bottom (foreshadowing his action figures’ body) and a confused little half eaten doughnut. 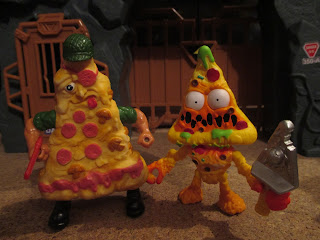 And so this disjointed mess comes to a conclusion and that conclusion is: these were so worth the frustration finding them entailed. They cost £7.99 in the UK, a fair price for a toy their size but damn cheap for their levels of awesomity, sure that awesomity is strongest to a niche market that’s completely outside of the target demographic but if you’re part of that (and I am) £7.99 is fuck all – buy these weirdos friends, buy them so that there may be a second series with burgers, pancakes and hot dogs! 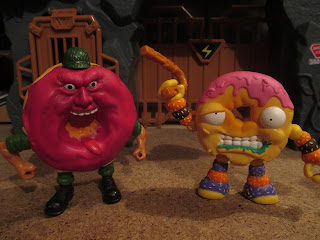