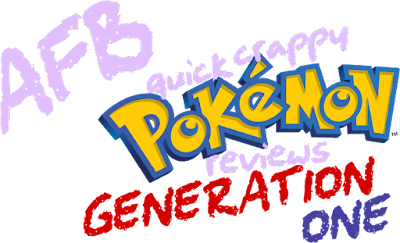 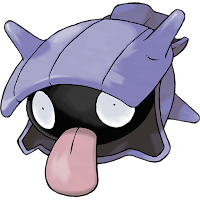 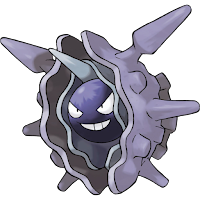 *shrugs* I got nothing but 3 ball mehness for these so let’s make vagina jokes.
Cloyster looks like a battle vagina, it was slightly less completely and obviously a cooch when you couldn’t make out it’s perfectly round head and instead just saw eyes in the darkness, then it was more of a haunted fanny-like object, but since it grew a clitoris it couldn’t be more of a pussy if it had a Vulpix phobia.
Shellder doesn’t do much for me at all, it’s the tongue I think, it’s supposed to represent this ‘arm’ thing that molluscs have which is cool and everything but it’s just always (appropriately) stuck out to me and it never puts it away, that’s very rude Shellder. Shellder might be less original without it but it’d definitely make a better design as far as I’m concerned, maybe if they’d just made the tongue a different colour, closer to purple to lose that ‘bollocks on a bulldog’ element it has.
My, we are being groinal in this one.
Still it’s better than the original design, which was just a smaller Cloyster: 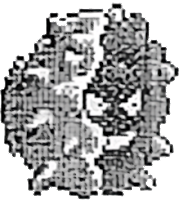 Note you can also see that even this early on, the pair have their round black pearl/clit heads, you can see the shine of it.
Labiaesque part aside, I do quite like Cloyster’s shell though – it just looks so damn dangerous (while still being adapted from the look of real shells). I’m surprised Cloyster didn’t get a Mega too, it’s a design that was crying out to be made even more over-the-top. 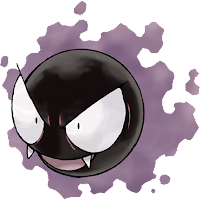 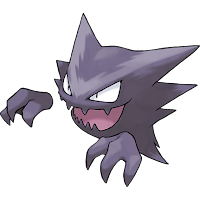 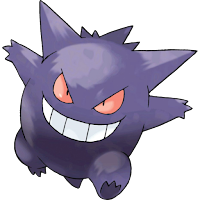 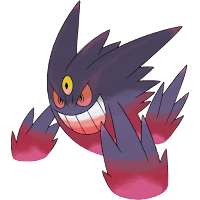 Well they fucked that up didn’t they? For the unknowing: Ghost Type was supposed to act as a foil for Psychic Types, with Psychic being weak to Ghost, but the only line of Ghost Types in Gen 1 were given the Poison Type too because they seemed to just throw that type onto anything that looked remotely shifty and Poison is WEAK to Psychic. This oversight is one of the main reasons that Psychic was so overpowered in Generation 1 – there wasn’t anything to stop it! All the bugs were too weak and the ghosts had a dry grass/flame relationship with the types they were supposed to destroy.
Don’t think I’m holding that against these three beautiful monsters, it’s just some trivia I felt like sharing (Psychic has been balanced out and nerfed for years now) because I all caps, multiple underlining ADORE the Gastly line. Ghost is my favourite type - not just because I’m a massive Goth stereotype (though also because that) – I have a long standing…some might say ‘obsession’ with death but we’ll call it a fascination with death. Today I like to blame it me being a suicidal, I have intrusive suicidal thoughts roughly once a day, it’s a side affect of my clinical depression and I’m completely used to it but of course I’m going to have a fascination with death if I have that going on in my brain I say. It’s just for the tourists, I’ve been a morbid shithouse since long before I had a mental illness. This fascination (NOT obsession) with death translates to a fascination with ghosts of all kinds, I’m also a horror nut so I’m going to be drawn to the spectral or ‘classic horror’ style ‘mons anyway but there’s also the fact that through the franchise’s lifetime Ghost Types have been exceptionally consistent and consistently good. It could be because they only introduce a couple per generation so only the best get through – sort of like how Legendaries are supposed to work but sadly don’t.
And they started off strong design-wise, we have three different ghost archetypes filtered through the Pokémon world, Ken Sugimori’s art and an exceptionally long development time (both Gastly and Gengar were amongst the original 31 ‘mons). We have the amorphous shape, the sheet ghost and the humanoid ghost and all of them have just the perfect faces. Not the perfect facial expressions (though that too) but the perfect faces, these are the ghostiest of ghosts.
Gastly is simplicity itself, though I do miss the time when it was just gas and a face, the orb look is nice (and way easier to draw) but there’s something much more creepy about this disembodied face in a gas-like sea of dark – smiling at you – with vampire fangs. Gengar suffers from not being as good as Haunter but (a bit like Rhydon only cooler) is still a class little monster in it’s own right, it always looks downright mischievous and…fuck this lets talk about the urban legend (of Zelda) associated with it because it bugs me. No, Gengar is not Clefairy/Clefable’s shadow. I know this because Gengar and Clefable were designed together and at that point Clefable looked completely different while Gengar was basically the same as it is today: 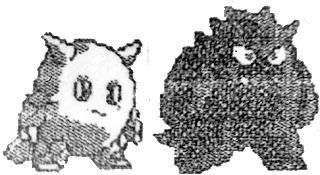 You can find these early sprites easily nowadays, this rumour should have died. Gengar is clearly based on a shadow (and does indeed imitate shadows in Pokémon lore) but it’s connection to Clefairy is completely baseless, the final Clefairy design (and Clefable) weren’t even designed by the same person.
Haunter is still an absolute favourite, and oddly the anime isn’t responsible – it helped but I’d already been to Lavender Town and fallen in love with the ghosts by the time I saw those episodes. Everything about Haunter’s look is just brilliant, it’s like Slimer’s delinquent cousin, it’s classic cartoon ghost mixed with jack-o-lanterns mixed with Rayman (!?!), scary enough to work as a ghost but friendly and mischievous enough to work as a pet or partner in crime/battle. So it’s no surprise that I liked it on sight. Of course then this happened: 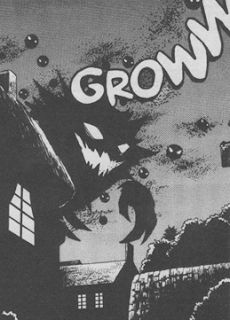 That’s from the Pokémon: The Electric Tale of Pikachu manga, which was – for no real reason – far more accessible to me during Generation 1 than the more popular and wildly read/known Pokemon Adventures manga (aka Pokémon Special manga, which is shit hot). That is a giant, murderous, soul-eating Haunter and I first saw it when I was a disaffected, death obsessed 14 year old coping with undiagnosed clinical depression on top of being a teenager but the point of bringing this up (and the anime too actually) is just to further justify my love of Haunter: Haunter is great in everything.
I’m really rubbish at explaining why I like things sometimes aren’t I? Which begs the question ‘why on earth I’m doing this?‘.
Oh yeah! Mega Gengar! They made the right decision in making it look more like Haunter, though by Generation 6 Haunter was, I think, firmly established as a fan favourite and the preferred child of the three so that makes a lot of sense form a fan pleasing point of view, and Game Freak have ben very keen to please nostalgic fans and especially fans nostalgia for Generation 1 for a while now. But what I honestly like about Mega Gengar so much is that is it such a pleasing set of colours, a gorgeous purple gradient that pulsates and wibbles on the in-game models, Mega Gengar is the nicest lava lamp alive. 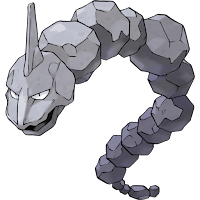 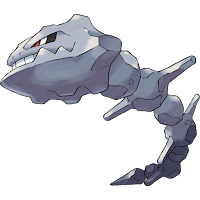 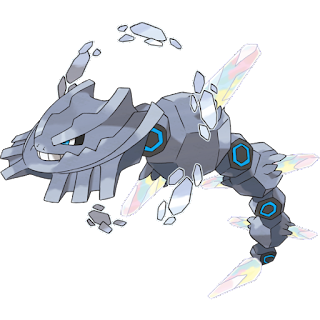 As a concept for an elemental animal Onyx had to be in Pokémon, a snake made of rocks was a must, but it’s a concept executed with more than enough originality; not only are these buggers huge but it has a face that’s all of it’s own, like no other snake or rock snake around with an expression that’s…what…Bogleech called it’ stony’ (ha, pun) but that’s not quite right, it’s more ‘knowing’.
But Onyx really did need an evolution, it’s high defence is useful around the time you usually get it (mid-game) but Chansey (who’s not even made or rocks! Cheek) outclasses it, so it needed a little something.
Game Freak’s idea of ‘a little something’? make it a bigger METAL snake with the face psychopathic murders have just they pull out the knife. There’s a lot of sense going on here, steel comes from ore (or the ground) to having Rock or Ground Types evolve into Steel Types is completely logical, ‘big metal snake’ is a cool concept and Onyx not only needed the stat boosts that come from evolution but was already pretty popular and memorable, making it a good choice to advertise for the new typing. Mega Steelix is, of course, mental as well as a little messy and unfocussed, a little ‘fan created’ if you will, but I rather like it – it’s so hard that it sprouts diamonds and it’s face got even meaner. I’m not sure about the shit floating around it’s head but it’s Japanese, and in Japan ‘having shit floating around you’ equals ‘uber-powerful’ when it comes to character design.
I wasn’t the only one disappointed that there was no crystalline Alolan Form for Onyx right? 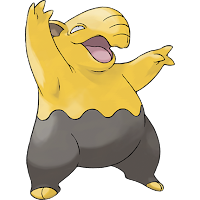 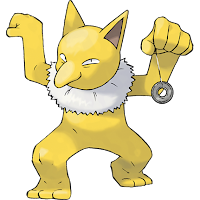 I feel like I SHOULD like Drowzee, it’s a tapir after all (well specifically it’s a Baku, a mythical creature and even more specifically it’s a Pokémon that shares traits with our world’s Baku and tapir but you get what I mean) and I like me some tapirs, but I can’t ever get it up fro these two and never have been able to. My thoughts on Drowzee are ‘it looks like an easier egg’ and ‘I really wouldn’t want within 20 foot me’ while my thoughts on Hypno are ‘ew’ and ‘I really wouldn’t want one within 20 feet of any schools’.
I dunno, I can maybe drag a few more words out of my malaise: Hypno is, like Alakazam, a showing of a rare and strange talent of Ken Sugimori’s -the ability to make monsters that feel like old men without being overt or too cliché. Alakazam was the wise old master, Alakzam is the old boy down on the road on the sex offenders register but both are also first and foremost animals/monsters, not drawings of old men with a few animal-like or monster-like (or elemental) bits stuck on.
That’s all I can manage 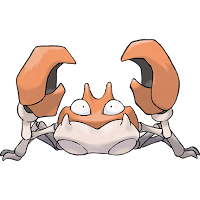 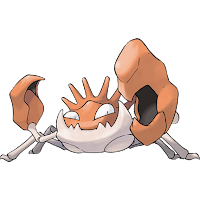 OOOOH-OOH the Okey-Kokey!
OOOOH-OOH the Okey Kokey!
No, seriously, why does Krabby go ‘kokeykokey’ in the anime and not say its name like just about every other Pokemon? I can write of Arbok saying ‘charbok’ as some kind of speech impediment, it’s fangs or tongue or something getting in the way but why did 4Kids choose to have Krabby and Kingler gargle a terrible novelty hit? It’s so out of left field, so incongruous simply by being so different with no explanation.
Yeah, if you haven’t guessed I’m padding this out, there’s very little to say about Krabby other than ‘it’s a neat, simple little carton crab that always looks like you’ve just dropped an insult about it’s mother into a conversation about cars’  I like it’s expression and I like it’s design for a crab. Kinger is a good example of an evolution that’s just ‘X but bigger’ done right, everything becomes more larger, more menacing, things like Krabby’s ‘horns’ become more numerous and it’s given its own ‘thing’ to differentiate it from the stage before it, in this case Kingler’s HUGE claw. Wouldn’t Kingler and Clawful be such good friends? And an even better fight to sit back and enjoy?
Good crabs, in other words.