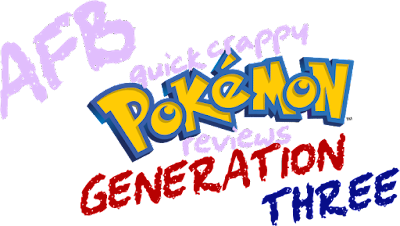 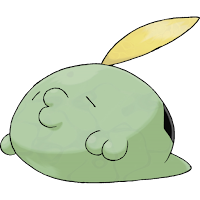 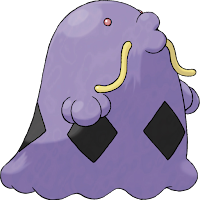 This is better, I needed something to be enthusiastic about again
Like Wingull and Pelipper these two are the owners of their very own unique art style – in this case roughly what would have happened is Peanuts ever went sci-fi (you can see it right? Charlie Brown and Linus having a chat while in the background Snoopy is trying to stop Gulpin from innocently eating the whole scenery) but unlike Wingull and Pellipper these two are ADORABE BLOBS THAT CAN EAT ANYTHING. They’re so fucking weird and cute and cool – ok, apparently these little splodges are nearly all stomach, they have tiny heats and tiny brains and mouths that open incredibly wide - so wide that Gulpin can swallow something it’s own size easily and Swalot can easily engulf a truck tire: 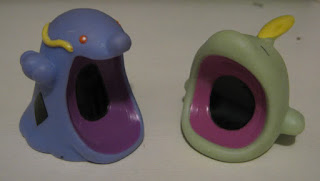 And they have stomach acid that can eat through just about anything. With the adorableness and what the fuckery up this high it’s impossible for me not to be mad on them. I prefer Gulpin for completely for the reason that it’s cuter - when it opens it’s moth it looks adorable rather than terrifying, which just makes the fact that it IS terrifying and that it’s trying to eat you whole all the worse if you ask me, like ghosts of children, or attractive Tory MPs. Swalot is far more obviously unnerving – and sweats poison, no actually it can SPRAY its poisonous sweat as a way of paralysing it’s intended victims, apparently – but it’s under a layer of fancy as fuck. Look at it, with its aloof stance and its moustache, it’s no surprise that Swalot wearing a top hat and monocle became a meme. It is wearing a grandad sweater though, seriously you’re telling me you don’t look at those triangles and see an uncool pull-over?  It’s something Doug would wear. Which I guess just makes Swalot a rich old gentleman…who’s relaxing on the golf course! And can also eat you alive after spraying you with toxic sweat.
God they’re just so fun and inventive and weird and cute and creepy and YES! YES TO GULPIN AND SWALOT!

Because two Pikaclones weren’t enough we have the admittedly very adorable Korechu, which even has ‘chu’ in the name, I think it looks like the little mouse that used to follow Jerry around (his nephew?). Korechu was an event ‘mon for the DS remake of Hey, You Pika…wait, hold on…
…What…?
….fuck off…
…What do you mean that was a fucking hoax!?!
No wonder I couldn’t find any decent art of this bloody thing!!
Fucking internet… 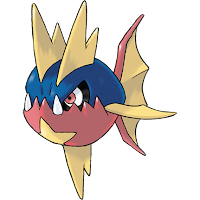 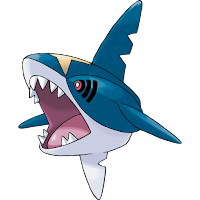 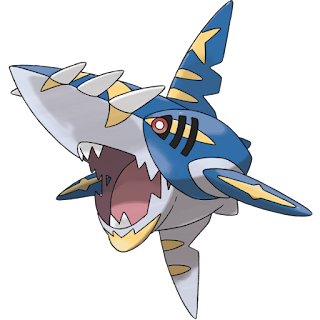 *shrugs* Poképiranhas and Pokésharks are cool
Fictional piranhas are like strawberry flavouring, all strawberry flavouring is easily identifiable as ‘strawberry’ but none of it tastes like actual strawberries, all cartoon piranhas are identifiable as ‘piranha’ but not really like actual piranhas. Carvanah is a fine cartoon piranha, it has a big ol’ underbite, angry eyes and it’s part Dark type. That’s all I got.
Sharpedo is a little more interesting, it’s clearly the descendant of Ikari from that demo I’m not allowed to mention anymore:

They couldn’t get their half-a-shark into Gen 2 but they got it in next time, now mixing it with a torpedo instead in a way that far more organically blends the two things, rather than just sticking an anchor on the arse of something. Sharpedo’s actually pretty unique as cartoon sharks go you know, even though it doesn’t look like it at first: it has no back half of course, it’s eyes are in it’s gills (weird) and it has those two nice big serrated fins that look like knives, it also doesn’t have complete rows of teeth, which I’ve never noticed until just now. There aren’t many sharks like this around and that’s a good thing.
Mega Sharpedo feels like it’s trying to hard to be badass, with it’s scars and it’s blades and being all extra pointy an’ shit. It’s over-the-top in that Mega Evolution way that I enjoy but it really wants to be cool and just ends up looking a bit silly. I really like the flesh strands either side of its’ mouth though, it’s like during its Mega Evolution its mouth gets too big for its skin and rips open further Chelsea smile fashion. 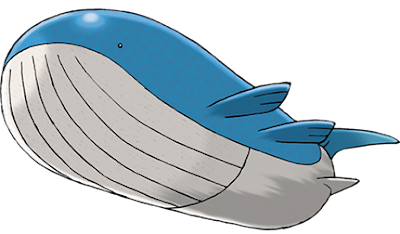 I do like me some Wailmer, it’s the perfect way to abstract a blue whale in a way that feels creative and unique. That sentence is more complex than it was meant to be, I mean that by making it a ball that looks like a whale it’s an unusual way to simplify a blue whale down for a cartoon animal but one that feels completely fitting (even though blue whales are long bastards) and it has a big adorable face that I just wanna smoosh.
I don’t need Wailmer to evolve personally but I get why it does. Wailmer just doesn’t have that epic feel to it that makes it acceptable as Pokémon’s only representation of a Blue Whale. Blue Whales are fucking awe inspiringly massive things, I pretty much lived at London’s Natural History Museum throughout every summer holiday of my childhood, a place famous for its blue whale skeleton and life-size model and they’re just beyond massive. Wailord has that sense of scale to it, Wailord feels epic in the way that Wailmer doesn’t, but it just doesn’t have the same levels of personality. It can impregnant tiny Pokémon with what is presumably the largest Poképenis though (though whales have comparatively micro-penises compared to their size, they’re so big their micro-penis would still destroy a Skitty with just it’s tip, I learnt that from Q.I. of course). 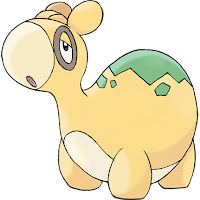 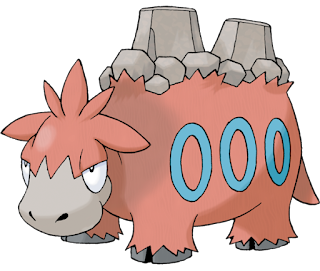 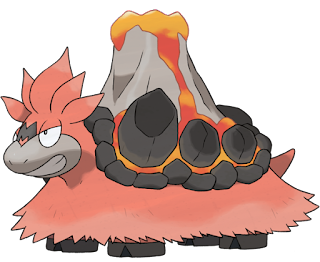 This was another set of ‘offenders’ when the game first debuted, again their radically different (feeling) style (that’s not that radically different from Smeargle) and Numel’s seemingly random colourization made me hate them on sight. However at some point I realised the following: camels don’t look like they were designed by the same person who designed the rest of the animal kingdom, camels are weird fucking things, have a camel picture: 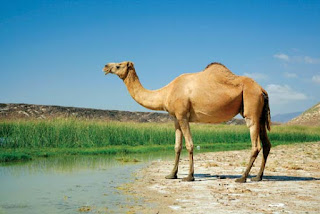 That is fucking odd. So like with Gurotesu and Huntail the line not looking like it fits with Gen 1 and 2 is pretty appropriate, and unlike Gurotesu and Huntail real camels are also goofy a.f. so this doofy Rugrats style is an even better fit. I still don’t get why Numel is yellow though, I get the green, it represents grass on the hill that is Numel’s back, which I’ve always interpreted as being based on a geyser btw because geysers are basically the unevolved form of volcanos aren’t they? If you could level a geyser (Water/Ground Type obviously) up to level 28 it would evolve into a volcano (Fire/Ground type obviously). But why yellow? It makes Numel look more like a balloon animal than a hill.
Stylistically Camerupt and Mega Camerupt are straight out of Rocko’s Modern Life, those faces, they’re Rocko’s Modern Life faces. It may as well have evolved from Sharky. Conceptually however Camerupt is another of the Onyx/Cynaquil ‘so obvious how could I not have thought of this’ group of elemental animals; a fire camel with volcanos for humps! Of course! You might be expecting me to bitch about those big blue ring markings on Camerupt’s side but… I don’t find them all that bothersome, I think it’s just simply the shades of orange and blue, I must find them complimentary to the point that the rings just sort of fade into the overall design, I wouldn’t have put them on there, I’d be happy if they weren’t there, but it wouldn’t affect the ‘mons ball score if they were gone.
Mega Camerupt becomes ‘a mountain’ and what’s not to love? Camerupt was already a Bactrian camel evolving from an Arabian camel, which was a great idea, but it becomes the fuzziest Bactrian camel ever and grows a turtle shell with a sodding volcano bursting out in the middle of it. Mega Camerupt is sweet. However, it has a fucking ‘M’ in between it’s eyes? Is it supposed to be an M? For ‘mega evolution’? If so, why are we throwing superhero design elements onto a camel? Was there a camel superhero in Japan that was popular at the time? I don’t even think Kinnikuman had a Camelman and that had a fucking Rubix Cube superhero. Maybe Game Freak’s designer just got fed up with Rocko’s Modern Life and moved on to Dial M for Monkey? 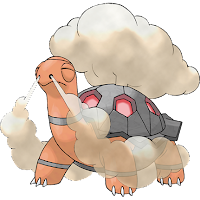 Torkoal was one of the first ‘mons from this generation I took too, it’s never been one my favourites (which I sadly think is a very common thing to hear about Torkoal) but it’s such a nice idea - a Tortoise’s shell as an oven – with such a lovely colour scheme – colours that work as rocky and clay but also work for a tortoise or other very ‘dry’ animal – and such a lovely little face, turtles and tortoises are more often than not given cute or pretty standard cartoon faces (as we have seen with Squirtle and will see with Tortouga) and that’s just fine but it’s nice to occasionally get a tortoise/turtle looking creature that has that wise, weird, old look to it.
And of course, with it’s weird face and random line across it’s head it sure does look like the tortoise form the old Creature Comfort adverts dunnit?: 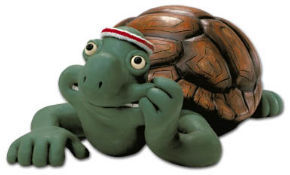 And it naturally produces mushroom clouds.
And it’s the signature Pokémon of Flannery, and I really rather fancy Flannery.
S’alright really innit?
It is strange that it isn’t Ground/Fire or Rock/Fire though. Maybe because we had Numel and Camerupt in the same game? But we got two Water/Ground and Water/Dark lines this gen…