It’s time to get wibbly-wobbly and timey-whimey with a six-part story-arc; we won’t see an arc this long again until Shanazar, which is over 80 issues afterwards! (although I guess you could argue The Final Victory is as long given it runs through multiple strips for multiple fortnights but that’s just technicalities now isn’t it?)

The Return of Chaotix (Sonic strip, issues 67-72)
Very Un-Quick Summary: The Miracle Planet has returned! And walking on its chain is Porker Lewis, Sonic greets him but he seems off. Not far away The Chaotix arrive via Omni-Viewer and take out some super Troopers while Nigel Kitching writes like Lew Stringer. Sonic and Porker meet up with them, turns out they’re here because they think the Brotherhood of Metallix are, Sonic says no worries, he dealt with them, then Omni-Viewer drops an illusion they’d put up and it turns out the whole Miracle Planet is now a giant Metallix head – oops. While walking the chain Porker Lewis is revealed to be a Metallix and it takes all five of the heroes to defeat it, the Link Rings from Knuckles Chaotix delivering the final blow. On the planet proper they arrive just too late, Porker is freed but the Metallix return from a trip in time, now the whole of Mobius is robotosized into Planet Metallix!  Sonic wants to stay and fight but then instantly changes his mind and they flee via Omni-Viewer to the planet below, but Emperor Metallix is right, they have nowhere to run to. Fleeing some more, this time from Metallix they listen to Charmy (fucking idiots) and end up in a dead end, ready to fight until the last they are instead saved by cloaked individuals who then blow the Metallix up, so cool, the cloaked leader of the clocked individuals removes his cloak to reveal…Dr Ovi Kintobor!?! Vector has a plan though, you can trace someone moving through time, it leaves a trail, and Omni-Viewer can follow it, s they do that, but the Metallix aren’t stupid and have the trail guarded, Sonic uses a device Kintobor gave him as he left and it turns a Metallix against the others, just as they get back into the Omni-Viewer Sonic finds a rotten egg in the hand of one of the now destroyed Metalixes and brings it along, feeling it should mean something to him. The trail leads to the day Sonic first became blue, Charmy calls Brown Sonic a weirdo, I lol’d.

As they watch Sonic’s transformation the blue blur remembers the significance of the egg – it was the egg that combined with the ROCC explosion ot make Robotnik! Sonic puts in it back in Kintobor’s fridge, Might think he’s gone mad and is unimpressed with the anti-climax, moving 24 hours into the future Sonic makes sure Kintobor becomes Robotnik and trips the kindly old doc – yes, Sonic has just had to create his nemesis to save the world. It worked, and back in the present Sonic has Omni take them to Dr Robtonik, who doesn’t believe a word of it. Porker has a plot hole he’s found – if the Metal Sonics were built by Robotnik, home come erasing him didn’t erase them? Turns out Grimer actually designed and built them, Eggman just made the self-destruct sequence. Wait, what self destuct sequence? You mean he could have self-destructed them without sending Sonic last story? yep, he was just hoping they’d kill the azure rodent the he’d use the programme. Then the Metallix descend o n the Metropolis Zone, so many of them they blot out the sun! as the Chaotix and Sonic fight in vain, Eggman scrambles to find his self-destruct remote, he’s just to slow and Empeoror Metallix grabs him she grabs it; Sonic is rarely ‘just to slow’ though and thieves the device from the emperor just before he crushes it, using the battered box to win the day. He lampshades the anti-climactic nature of the win then just fucking leaves, leaving Eggman to pull himself together and Grimer to show the dictator his new Knuckles-based Metallix design. 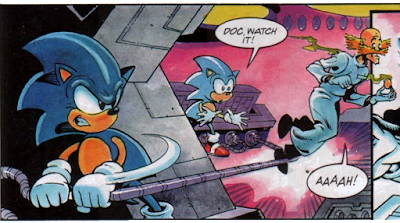 Fuck me that’s a long story to summarise, with so much happening just making it worse – and that’s two of Return’s biggest strengths: it’s pacing and its plot. It’s very well paced, so much happens yet nothing feels rushed and enough page space is given to each event …. with two small exceptions: Kintobor giving Sonic the Anti-Metallix device (he just goes ‘oh, here, have this’) and Sonic just changing his mind on the Miracle Planet, I think the latter is supposed to be comical though and Elson just fucked up and made it look serious. The plot is fantastic, it’s quite a simple alternate timeline, the bad guy is the good guy for want of a nail, but ‘Want of a Nail’ stories can be quite hard to do, when done right they should be time-travelling equivalents of a detective story with the metaphorical ‘nail’ making as much sense as the eventual reveal of ‘whodunnit’ (whochangedit?) with bonus points if, in a story like this where the characters are undoing the changes, the reader can work out the answer before the characters. Now this is a kids comic so it isn’t going to be as complicated a set of clues as your average CSI (or even your average game of Cluedo) but Return wholly succeeds, as a long term reader and Sonic fan I am shocked by the reveal but comforted that it makes logical sense and chuffed I worked it out, and it succeeds with the right amount of dramaticness (that IS a real word).

Speaking of dramaticness (and my second clunky segue in two paragraphs) this story wouldn’t be half as good without Richard Elson; I know I praise him constantly but in he is essential here. There are a number of panels dotted around with some really dodgy dialogue, all of which can be summarised as ‘I must do this action because of this obvious motivation’, in fact Kitching’s usually snappy dialogue seems to be failing him a lot in the early few parts, especially in parts 1 & 2, but there is so much to like story-wise the odd panel of shitty dialogue becomes forgivable within one or two parts and Elson, Elson turns in such dynamic pages that it covers up for the odd slip-up on Kitching’s part, without them panels like this: 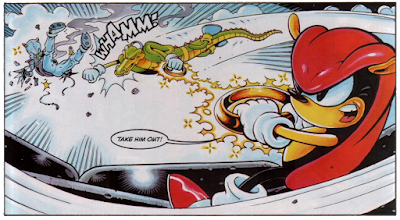 Would inspire eye-rolling not ‘wow, they just punched a robot off of a giant chain!’
The Metallix are defeated quite anti-climatically again but this time it’s given a proper build and aftermath, I don’t think we’ve heard of the self-destruct sequence before in relation to the Metallix but we’ve seen that Eggman does put self-destruct style mechanisms in his projects before (notably, the Cybernik) so it doesn’t come quite out of nowhere, and instead of just pressing the button, Robotnik has to find it, then it almost gets destroyed, then Sonic gets it and uses it, then the Metallix’s shut down is drawn very dramatically, then Sonic hangs a lampshade on the solution being anti-climactic for good measure, so while it’s no better than the previous two Metallix defeats it feels more satisfying (Total Chaotix only getting away with things because they didn’t actually defeat the Brotherhood). Unlike the last part of the trilogy the Metallix are also shown to live up to their hype; they’re still built up as terrifying threats but when engaged in combat, either alone or in groups, they are consistently hard to defeat, it takes one of their own to defeat a whole group of them and the Chaotix weren’t doing that great when the self-destruct button was pressed, despite having Espio and Mighty, respectively a character who can spin and go invisible and possibly the strongest thing alive. 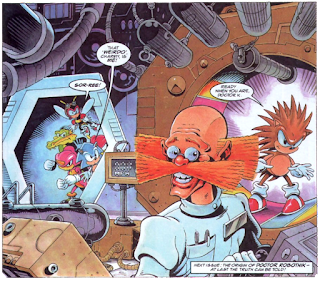 Anyway Return of Chaotix is slightly annoying in its placement; it starts mid-way through two other Sonic’s world’s strips and ends alongside another completely different set. And three of those stories are very important to the overall narrative of the comic. So I’m just going to finish this one up here as a ‘shorty’ and then do all the back-ups next part, starting with the ones I didn’t do in part 11, good? Good (yeah I know you can’t technically argue back, but I want to feel gracious).

Email ThisBlogThis!Share to TwitterShare to FacebookShare to Pinterest
Labels: A Look At, British Comics, Sonic the Comic, Sonic the Hedgehog, Video Games