Examples of Crap I Waste My Money On: Bootsale Report 7!*

My toe hurts
I got a thorn in-between two of those three nameless toes in the middle of your foot (well I assume they do actually have names, it’s just no one knows them because they’re so unimportant, kind of like the members of One Direction not called Harry) and I walked around with this thorn lodged there slowing sawing away. I am so interesting. What was the point of this? Oh yeah, I went to what will quite possibly be my last bootsale of the year: 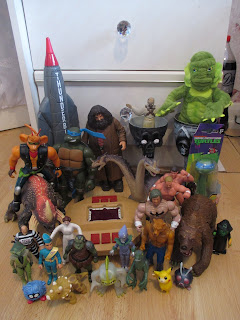 I think I ended on a relatively high note: I mean just one section of today’s haul photo has a velociraptor, a werewolf, the villain from Stingray, a fucking bear and Pikachu, it looks like someone let a wild animal loose amongst a group of trick or treaters. Today was also mercifully a Clean Weak, after last week and spending half an hour cleaning the sticky off of Blackstar demons this was a welcome change, other than the big Biker Mouse all I really had to do was wipe everything over, clean the sand out of Venonat and then I could get to the posing and the hugging of The Creature From the Black Lagoon. So are you sitting comfortably? Then I’ll begin: 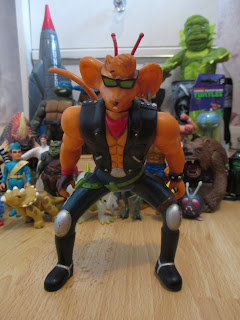 Confusing Biker Mouse
50p (66¢)
It sounds really odd saying ‘Biker Mouse’ and you know I don’t think the show ever used a singular for them, I could just call him by his name (Throttle) I suppose. Today is not one of those days where I stick to the fucking point it seems. I know every Biker Mice From Mars toy Galoob released back in the franchise’s ‘heyday’, I know this because I am criminally sad, but I have no idea about this figure and you know what? That’s really nice. I like that I can still find exciting surprises even for relatively small lines, knowing everything is dandy and all, it lets you feel smug when you’re on a forum and it’s not that schooling slightly less knowledgeable people from the other side of the world who you’ll never meet or even see a picture ISN’T satisfying but stumbling on something you never knew existed makes me question my life less, of course now I have to spend hours on Google trying to identify an 8 inch hollow plastic space mouse, which does kind of make me question my life...yeah no points are being stuck to in this post. 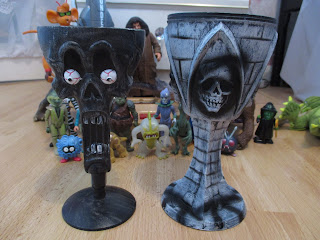 Awesome Halloween Goblets!
£50 (66¢) for both
This is why I always go to a bootsale with someone else, to shame me into not buying crap like this. Sometimes the lure of the crap is too strong though and then I’ve got more Halloween tat. Technically this is Dinosaur Dracula’s fault; he started his two-month Halloween countdown the other day and put me in a Halloweeny mood and I should never be in a halloweeny mood before a bootsale because I will waste money on cheap plastic skeletons, or cheap plastic goblets. Seriously though, just behold these magnificent drinking vessels! The one on the left is probably the better quality of the two, looking like gothic Playmobil (though it also puts me in mind of Transylvania at Chessington World of Adventures) and I will feel very Transylvanian drinking out of it but the one on the right has the best face I’ve ever seen on a Halloween novelty, I’ve never seen any decoration look so scared. I just want to give him a hug and tell him that it’s ok, I’m not really drinking his brains, it’s only raspberryade and I’m just pretending. 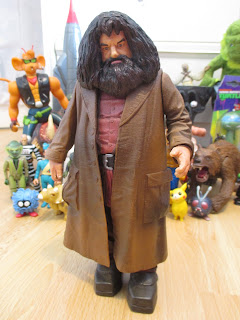 Motherfucking Hagrid!
£3 ($3.94)
In retrospect maybe I should have taken a photo of Hagrid fighting the bear, hmm maybe not, firstly Hagrid would obviously be the victor so there’d be no suspense and secondly he’d be much more likely to tame it and name it Norbert than to kill it with his bare hands. You’ll notice the picture I did take is much brighter than the rest, that’s because the sun came out only for Hagrid because Hagrid is the best and can beat up bears AND earn the respect of giant demonic spiders just through being a great bloke. 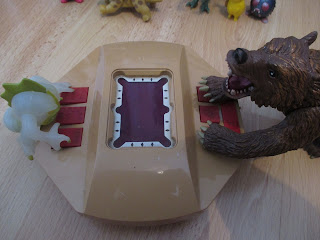 Cue Ball!
£2 ($2.63)
For a long time this was the only video game in my nan’s house, we had my old NES there for a few years (whereupon grandad instantly found out you can cheat at Duck Hunt by standing with the gun against the TV screen) but nan dropped it down the stairs because of course she did and that was the end of that, back to Cue Ball. So I played Cue Ball a lot and bloody loved it. It’s just snooker but on a small black and red LCD screen, It’s not actually a two player game, well not in the way it’s being played here, but the bear and the swamp creature were having so much fun I didn’t want to tell them, and the bear’s pretty competitive so I didn’t want to get in his way. I’ve been looking for a Cue Ball of my own since nan moved and threw the Cue Ball of my childhood away because she is the callous sort of woman who drops Nintendo Entertainment Systems down stairs and sheds not a tear (he actual reaction was ‘shit it!’ if I’m not mistaken) and now I have one, I was so excited to see it I shouted ‘Palitoy Cue Ball!’ across the aisle, not the most suave thing I’ve ever done. It still works but even if it didn’t it’s such a lovely design I would just have it a piece of modern art, a beige flying saucer talking point in the front room. 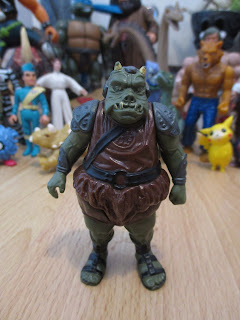 Gamorrean Guard!
£2 ($2.63)
My favourite vintage Star Wars figure is almost certainly The Emperor but the Gamorrean Guard really isn’t far behind him, there’s very little to dislike or be unenthusiastic about when it comes to a green armoured pig man and I love just about everything about his design, and his original figure - which has a crude charm and chunkiness that more modern versions lack. This isn’t the best condition Gamorrean Guard that’s ok because he’s just the first of many, my goal is to have a whole heard of green pig men to surround my Rancor and keep him safe from murderous blonde Americans who sound like The Joker.  Oh fun fact, Kenner later turned this fellow into Friar Tuck to make money off a Kevin Cosner film. 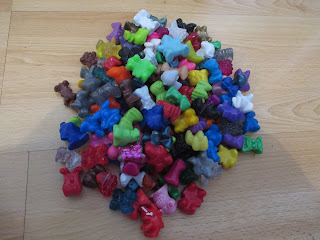 A Mountain of GoGo’s Crazy Bones!
£5 ($6.57)
Crazy Bones were the last mini-figure fad of my childhood and they were the last time I remember kids really got excited about small blind-bagged weirdos until, well, until they came back (I think I’m right in saying the second iteration of Gogo’s came out before Trash Pack right?). I’m not all that fond of the 2010s Crazy Bones, looking like little manga characters is cool but the original GoGos looked like Slimer’s extended family and were far more often transparent, still the good side of their resurgence is a lot of original Crazy Bones ended up in the hands of kids who are now growing out of them and selling them off at bootsales, hence this fucking mound of them and I can tell you that when you get this many Crazy Bones together, they’re really quite heavy. I could have quite easily killed a full grown adult with the bag I had these in, I didn’t, I just settled for silently cursing my need to buy cubic foot of hard plastic so early in the day. How many ‘Bones are in this pile? Well of course I counted them and the answer is 127, I didn’t have a pen and paper handy so I made the number out of Crazy Bones and took a picture so I wouldn’t forget it:] 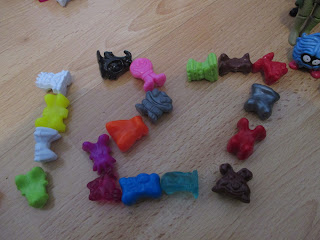 This was ingenious when I thought of it, now I realise that I could’ve just put it in my phone.

So there you are my imaginary buddies, you probably won’t see another Bootale Report this year. This should mean I’ll fill this blog with more meaningful posts but probably just means I’ll post slightly less frequently, thanks for reading about other people’s old stuff that is now my new stuff (again), you’re great.
Posted by dwitefry at 06:15

Email ThisBlogThis!Share to TwitterShare to FacebookShare to Pinterest
Labels: Bootsale Report, Examples of Crap I Waste My Money On, Toys