Examples of Crap I Waste My Money On: Bootsale Report 16!

I feel dead inside, so maybe this isn’t the best time to write a blog post enthusing about old toys.

Today I walked around a sun drenched field, a light breeze ruffling my hair – or at least it would if I had any – feeling hollow and empty inside, like an Easter egg but less delicious, and as I wandered and questioned how my life had turned out the way it had, I bought some old junk off other people: 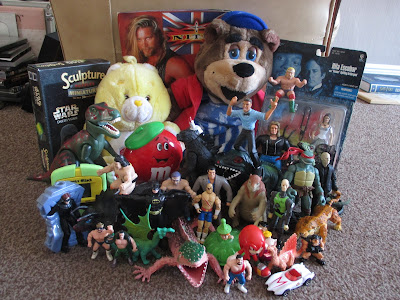 Leaving my teenage poetry to one side, I did ok for someone who certainly hadn’t brought their a-game to this bootsale, there may not be too much there that’d wow ‘proper’ toy collectors with their mint-in-box Battlerams and carded Bobba Fetts but there’s a lot of my interests catered for in two (hopelessly fucked) carrier bags worth of stuff and some nice big ticks of my list of shit I need to own now plz, that should probably be capitalized, fuck it. That Care Bear’s a re-issue by the way, it’s the first time I’ve ever fucked up buying vintage Care Bears and it genuinely made me really angry at myself for a few lines, it’s not too big a deal in this case because a) it was 50p and b) I already have a vintage Birthday Bear in a larger size but it was still a silly mistake I shouldn’t have made. So off we go again, I’ve pulled out some stuff from the haul that I can squeeze a marginally entertaining paragraph out and today we have anecdotes, M&Ms, bears, dragons and Diesel looking two parts 1990s country singer and 1 part 1990s porn star so are you sitting comfortably? Then I’ll begin: 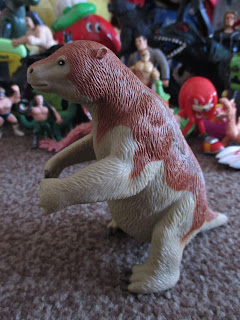 A Megatherium!
50p (64¢)
Maybe I just live a sheltered life and there you’re always seeing toy Megatheriums everywhere you go but I do not see enough Megatheriums, in fact this is the first one I’ve seen at a bootsale in a good year, of course now I’m gonna be seeing giant ground sloths everywhere I go, it’ll be quite expensive for me. I have an obsession with the Megatherium that dates back to early childhood; the genesis is Crystal Palace Park and therein lies a tale: Crystal Palace Park was the first place in the world to have models of dinosaurs and other extinct animals, they were sculpted by Benjamin Waterhouse Hawkins and unveiled in 1854. The models are now grade 2 listed buildings and the Dinosaur Court in Crystal Palace Park where they live is one of my favourite places in the world.
Anyway for a long time the Megatherium at Crystal Palace was part of the children’s petting zoo there, I mean this literally – it wasn’t in the zoo it actually help make up one of the pens - small mammals used to hope over its tail. Treating the Crystal Palace Dinosaurs like shit was the raison d’etre of Crystal Palace council for many years, things have changed now. Anyway this meant that when I was first taken to Crystal Palace Park to see the dinosaurs, by my dad and his girlfriend (later wife), the Megatherium was tantalizingly out of reach, a Foot and Mouth outbreak had permanently closed the petting zoo and left it derelict but still visible behind a shitty wire fence. Because all kids want what they can’t have and because I’ve always been fascinated by derelict places the Crystal Palace Megatherium took on an importance above the rest of the models, it became a ghost-like entity haunting this empty place where children once squeezed guinea pigs too tight and because of that Megatheriums became something special so that’s why I spent 50p on a cheap toy of one today. Aren’t you glad we had this talk? The Megatherium was moved to the Dinosaur Court during a renovation, it’s still thrilling to see him so close though that thrill has been dampened a little since they painted him beige, now he’s the colour of a tasteful cottage interior, still it makes this figure a closer match for him I guess. 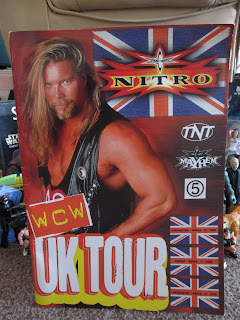 WCW Tour Programme!
50p (64¢)
What’s more boring than someone’s pointless anecdotes? Someone talking about wrestling!  I had to have this; this is the tour programme for WCW’s UK Tour for 2000 when the promotion was so far in the shitter the u-bend was a distant memory and they could smell the crazy wafting down from Titan Towers as Vince McMahon prepared to buy the place, shut it down and run a poorly received invasion story-line with the WCW stragglers he inherited. So yes this was an ‘ironic’ buy and I’m a horrible hipster but come on how could you turn that picture of Kevin Nash down, especially as he tore both quads posing for it. Inside it’s just small posters of some of WCW’s biggest names at the time – Nash, Flair, Sting, Luger, Goldberg, Bret Hart – with some statistics, this was after Scott Hall drank himself into oblivion (and contract termination) and I guess Hogan couldn’t be arsed to come to a vanilla midget of a country like Britain. 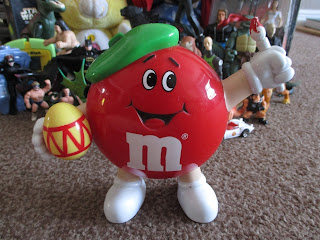 Easter M&M!
£2 ($2.56)
I’m all in on buying any of these I can find since I bought a whole batch of them last Bootsale Season but this is here just for the nice story he brings with him: I found this in a cooler bag filled with stuffed toys, had to have him (all in remember) and enquired about the price and received the irritating reply “£2, he’s quite old you know” very sharply from the well-dressed woman who was running the stall (I’d actually asked her husband because he looked like he didn’t give a shit and she looked like she had a prized set of crystal cut vases) I hate this shit and replied with when the thing was released exactly -it’s one of my many ‘fuck you’ replies when I get an ‘it’s collectible!’ response to justify an asking price (I thought £2 was a fine price though) but to my delight it turned out good! The woman chuckled and said ‘well you know your stuff, what am I telling you for?’ and we had a short conversation about nothing in particular, made each other genuinely laugh and both went away happy. That’s why I told you this, because sometimes people aren’t dicks and you should wait until you’ve had the whole conversation before you judge them as such. Also I’m pretty sure this is the cleanest this container has ever been. 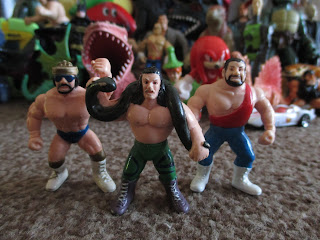 Action Wrestlers!
£1.50 ($1.92) the lot
Really I’m just highlighting these to balance out the random worthless crap with some stuff that could actually be considered desirable by the toy collecting community, which if their eBay prices are anything to go by these little buggers are certainly that. These mini-figures were brought out in the early days of Hasbro’s WWF line and are about as official as they are Boeing 247s and so on behalf of the company who didn’t put their name on the Action Wrestler cards because they knew Vince McMahon likes suing as much as he likes incest storylines and he really likes incest storylines I would like to say the following: any resemblance to any wrestlers who may or may not have been under contract to WWF in the early 1990s, living or dead, is purely coincidental especially if those wrestlers are Macho King Randy Savage, Jake The Snake Roberts or…I…I actually have no idea who that third one is supposed to be, Hacksaw Jim Duggan? Let me check…. Oh he’s one of the Bushwackers, originally he was painted to match their black and grey camo look, this must be a later release - or the factory just ran out of the grey or something. Anyway I love these guys, Hasbro didn’t make official mini-figure versions of their WWF figures like LJN did with Thundercats or, say, Playmates did with their TMNT Mini-Mutants to No Name Company 322 stepped in and did it for them, illegal yes but a nice thing for fans. 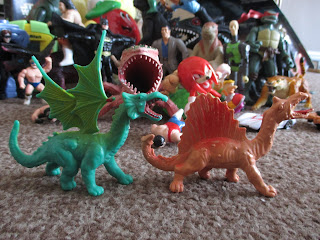 Dragons!
40p (51¢) for the two
I don’t have anything interesting to say, I just really like these toys – they’ve been sold in various lines for decades – and wanted to take a picture of them getting all Abbey Road an’ shit and post it on the internet. 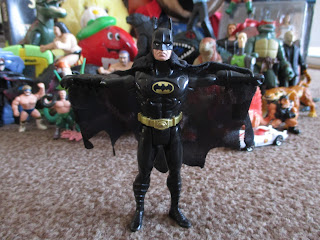 Shadow Wing Batman!
£2 ($2.56)
Ooooh yeah. One of Kenner’s earliest success stories with the Batman line, posed for swooping down on the cowardly, superstitious lot of Gotham City this grumpy fellow was part of their Dark Knight Collection, the first Kenner Batman line (it as also re-released in their Batman Returns line too, the figure is identical but if I don’t mention it I leave myself open to looking like someone who doesn’t know their batman figures and it would crush me to think someone thought that of me – given how annoyed I was about mixing up vintage and re-release Care Bears you can probably surmise how much of a joke that statement was). This was a damn good find, the capes on these bat-figures tend to get utterly bolloxed, their tear, ladder and in this case the clips that attach them to the arms of their Caped Crusader break off – not this one, though his cape could use a bit of an iron – ALFRED! – couldn’t be happier with him AND as a bonus you can spin him and make him look like he’s doing a twirl in a Broadway musical, all for the same price a dirty M&M container. 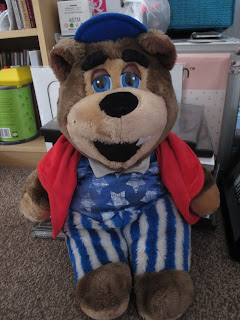 A Large Woody!
£1 ($1.28)
What? What are you laughing at?
Woody Bear here is the mascot of Pleasurewood Hills which, when I was a kid, was probably the least exciting theme park I could think of - meaning it was below even Gnome World (actually Gnome World used to fascinate me, it was like Where’s Wally but with gnomes, very atmospheric too, well worth the admission). I used to go there for two reasons 1) it had a small dinosaur area with one animatronic that was broken and thus always submerged, bubbling, within a small pond that was at about chest height for a child, it was mysterious and compelling and 2) I was fucking mad for Woody. He’s nothing really that special, just another mascot with a walk-around costume and some toys you can buy at the gift shop but I was just in love with him and his buddies Ronnie the Racoon and Clarence the Cat. I’d forgotten how shockingly awesome I thought he was until I saw this sitting amongst various Garfields and generic crane prizes but to 5-year old me he was confirmed as the shit. I think it might be because he was supposed to be magic, if you tell a child ‘that person is magic’ there’s a 99.9 percent chance they will they’re the best. Anyway this is a big Woody, I would never have been allowed to buy a Woody this size on a trip to Pleasurewood Hills, the Woody I have (somewhere) is a small hand puppet (he has legs, you put your hand up his back, under his shirt) but this Woody is a Care Bear and a half tall and I utterly adore him. He had a couple of spots of muck, the exact nature of which I’m a little scared to contemplate, but I got them off with just Fairy Liquid and hot water (which is how I clean all my second hand toys, it is the wire brush and Dettol of toy hording) and now I can hug him without fear I may be touching someone else’s pooh from 1994.

I can’t top a large Woody, and I have a G.I. Joe Street Fighter Sagat, the car from Speed Racer and fucking Godzilla in this haul – that is the power and majesty of a large woody. So I’m going to bed, thanks for reading (again), nite all.
Posted by dwitefry at 06:01