The Range: First Halloween Display of the Year!

Just a quick one, but something that should be celebrated every year if you ask me… 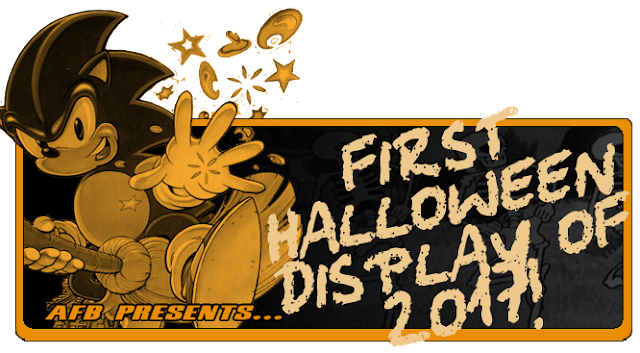 THE RANGE HAS BECOME THE FIRST SHOP THIS YEAR TO GET THEIR HALLOWEEN SECTION OUT! At least in Romford, I assume Romford is emblematic of the whole country while simultaneous hoping this isn’t the case at all. I mean if it was, there’s be a nationwide shortage of spray tan and track suits, but as I don’t follow the spray tan or track suit industry this could well be the case, what was I talking about? Oh yeah, motherfucking Halloween! For a couple of months a year shops that are usually no more than a necessity becomes fun and interesting and The Range is the first to strike Halloween o’clock, well technically it’s getting ready to strike – they were still putting their stuff out (they hadn’t priced anything when I was there this morning) but that didn’t stop me from taking pictures and out of pure glee:

This is the side you’ll see as you come in the door so it’s got some of the shop’s showiest offerings this year, the Range always has great quality stuff and that ghost prop at the end could have come straight out of a dark ride, it terrifies me (automatonophobia remember?), I waked ‘round the other side. Those black and white things in the middle light up, I’m particularly drawn to the haunted house below the skeletons but I’m usually drawn to old houses, meanwhile the new IT film seems to be turning this Halloween into The Clown’s Year, certainly in the Range, those plastic wall relief clown heads make no sense but do their job – brrr, fuckin clowns. My favourite though is the red-headed bats in the extreme foreground, they’re trying so hard to be scary but they’re just coming off as cute and frustrated. 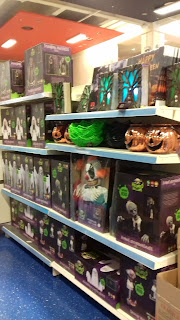 This is half of the other side of that display; the other half was just emptiness and boxes – itself creepy I suppose. The Range loves its fucking canvases, they have a whole section dedicated to prints of any old shit on canvas, apparently if you buy a picture that’s on a canvas it’s up-market and stylish, so they have Halloween canvases this year – they can fuck off. Everything else is win though, while the animatronic demon clown grabs the eye (and wets the pants) and the animatronic zombie grave buster is probably the best thing in the whole shop objectively speaking (I may end up owning one), check out those books above the super jolly metallic pumpkins, they’re a bit flash aren't they - he says for no reason at all. 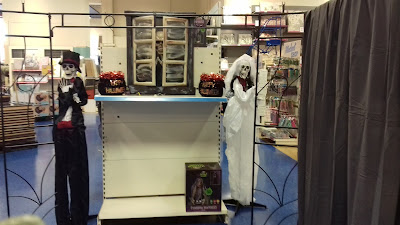 Finally I caught their end-cap mid-build, I don’t think that window with the skeleton coming through it is for sale – I mean I hope it is but The Range put a nice bit of effort into their Halloween displays and I’m leaning more towards it being part of a little weird bridal scene they’re doing for the end-cap, they want to have found a really creepy rendition of Here Comes the Bride to play. 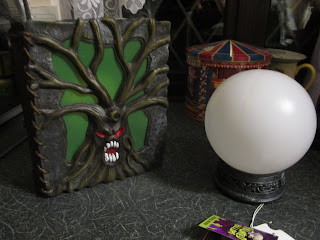 Of course I bought stuff and that stuff was Madame Leota and the Necronomicon!
Well the tags call them Witch’s Light Up Orb and Haunted Halloween Book but that’s not very exciting and thus totally ill-fitting for these two because they’re so exciting! The Haunted Halloween Book is of course the aforementioned book above the happy pumpkins but you may notice that the Orbs don’t’ show up in my photos, that’s because they weren’t technically on the shelves yet, they were in a box that I probably shouldn’t have rummaged in but I was all Halloweened up and wanted more, so I nosed in their unpacked boxed and found the orb, then excitedly asked an employee if I could ‘buy this stuff now?’ she said yes!  I would have done a little dance but I had my arms full of light up Halloween stuff and still have bruised ribs.  The ‘action feature’ for these two is the same and are part of the same ‘Haunted Hallows’ line, it can be summed as: there is a screeching universe full of pain, despair and LED light shows trapped in each object:

Obviously this doesn’t include sound (which is a bubbling, screeching, John Carpenter backed nightmare – it’s so fucking good) but having recorded this in the middle of the night I can tell you these things are LOUD, as far as I know I’ve managed to avoid waking up the whole street (the street I live on would let me know instantly so I think I got away with it) but I but every fox in a three road radius of my house has had a heart attack.
So as I judge the Halloween season by commercialism: the Halloween Season has officially begun!
Posted by dwitefry at 17:40