It’s time for boobs and incest! The twin hearts of anime!

In these photos that Leafa's left hand is always the same despite swapping hands being a major part of the toy, this is because the peg broke off while i was swapping hands (y'know, what the toy's supposed to do) to take these photos and I had to superglue on the hand I intended to use for display. It's also why the pictures are a bit boring, so if you'd always wanted to see Leafa lined up with the Planeteers using an amulet and the cry 'incest' to help call Captain Planet, I'm sorry - blame Max Factory. Figmra really are a quality control quagmire. 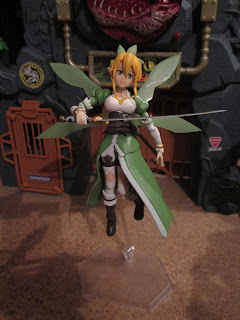 Well this turned up quicker than I expected. Sword Art Online seems to have settled into being the Nickleback of anime, it’s very popular but no one ever seems to admit to liking it, well fuck that I like Silver Side Up and Sword Art Online is one of my favourite anime. Being a contrary fucker like I am it wasn’t the opening Aincrad arc (where the characters are stuck in a virtual reality MMORPG where death in the game equals death in real life) that won me over (it has pacing issues) but later, less popular story-arcs – especially Phantom Bullet and Mother’s Rosario - and to be a really contrary fucker I loved the Fairy Dance arc. The common complaint I’ve read is that without the threat of dying the arc loses a lot of its weight and stakes, and the incest thing, I thought the incest thing was adorable and I’d argue that the arc simply has different stakes, Aincrad was about survival while Fairy Dance is a race against time, the longer Kirito leaves it the closer Asuna gets to becoming a sex toy and if he takes too long that slimy fucker Sugou will consummate the marriage of Oberon and Titania regardless of Titania’s feelings on the matter – I’d argue that racing to stop your wife being raped repeatedly is a good enough replacement for making sure you don’t die. 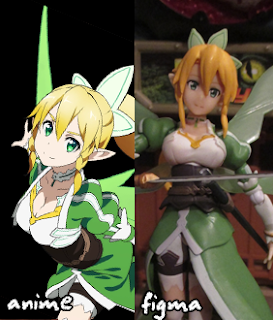 Leafa is the 314th figure from Max Factory’s core series of action figures: the Figma Action Figure Series and it needs to be said right now that Max Factor is a brand of make-up. I have a bunch of Figmas but have never bothered to review one on here before because...muffins, I have no good reason for this I just haven’t. Max Factory began putting out Figma figures in 2008 (the first was a pack-in with the PS2 release of Suzumiya Haruhi no Tomadoi according to Wikipedia) and holy shit I can’t believe there’s over three hundred of them now, is there someone who owns all 314 do you think? I hope so, that would look damned impressive. This figure is of Leafa, the in-game avatar of Suguha Kirigaya, the adopted sister and biological cousin of Sword Art Online’s main character and main chick-magnet Kirito Kirigaya, when Suguha is playing the virtual reality MMORPG ALFheim Online, which is a game themed around battling fairies. Suguha had/kind of still has a crush on her cousin in real life and a crush on Kirito in-game (Kiroto’s real name, which she only knew him by, is Kazuto) she’s also my favourite character in the franchise – I fucking love Leafa, I am disturbingly attracted to Leafa despite neither having a blonde nor elf/fairy fetish and am so pleased Figma finally got ‘round to releasing a figure of (we’d had three Kiritos, two Asunas and Sinon, it felt like they were purposefully blue balling me the bastards), she came out in 2017. 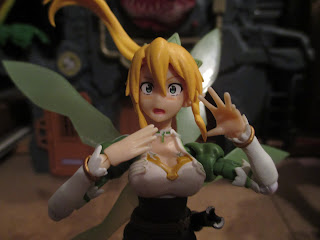 On paper – and in promo shots – Figma are excellent, incredible sculpting mixed with huge amounts of articulation, good customization and mostly clever design choices, in practice if you get a Figma figure where all the joints and pegs can be fully pushed in and aren’t looser than a hook…no I’m not going to finish that metaphor aren’t loose then there’s a good chance you will also soon witness a weeping statue of the Virgin Mary. I suppose the more joints and pegs you have per figure the more chances there are of one of them being fucked and as Leafa here has roughly 27 joints/pegs including stand and swappable pieces that’s a lot of chances per figure for something to go wrong. This figure’s pretty good, her arms have fallen off once apiece but they slotted back on, and only her right elbow joint’s peg doesn’t go all the way up, it’s noticeable but not too noticeable (helped by being the same colour as the rest of the pieces around it) however a friend of mine has got through three of Miku (from Vocaloid) in the last few weeks and gotten an unusable dud every time, one with some spectacular paint fuck ups, she looked like she has leprosy so bad you could see it through her clothes, that’s like four times Deadpool amounts of leprosy. So it varies. Construction and design wise Leafa has a lot of good, I have three complaints and I’ll let you judge how far up the nitpickometer they should be: her bracelets look a little cheap, I’d’ve preferred them being extra pieces glued on to allow them to be wider; her wings aren’t on ball-joints which – when you consider just about everything else is a ball-joint or a close approximation – seems a little odd and affects posing, doubly annoying as flying her Leafa’s thang in-game;  the articulated long coat breaks up the design for what I feel is an unnecessarily artic point, especially as Leafa’s flying poses are limited by her wing artic; her sword doesn’t fit into its scabbard, there’s a piece of left-over plastic blocking it just inside, I presume this to be an isolated incident though. Other than that we’re all good – she has a double ball/hinge at the neck, ball joints at the shoulders, elbows, wrists, crotch, knees, ankles, ab-crunch and pony-tail, very tight swivels on all four wings and her coat is split onto two swivels - they tend to fall off on these figures, both Kirito and Asuna’s drop every so often though Kirito only need a light breeze to fall apart, I don’t fart near that shelf. 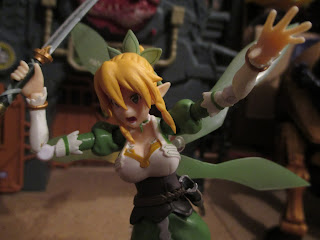 For Leafa I look for three things: good sense of movement in the hair, accurate (and thus pretty) face and massive tits, if you’ve achieved this I judge your sculpting pretty much great, this is pretty much great, though my first reaction was that her legs seem too short, especially her thighs- it’s not an error, they’re the same length on the box art – it might be an optical illusion or maybe I just remember Leafa as having longer legs than she does because she’s quite tall compared to the group of short-arses she usually hangs around with. As that’s my only complaint for sculpt and my only complaint for paint is a bit of white where it shouldn’t be on one of her thighs and boobs (stop that sexy thinking right now! It’s not like I’m going to make a boob joke in…8 words) let’s move onto accessories because she is stacked - with accessories. These Japanese collector’s figures pride themselves on customization and Figma do it well, out of the box she has clenched fists and her smiling face on, her wings and scabbard needs to be attached - my one barely fits in the loop intended for it which is tighter than a nun’s…no I won’t’ finish that metaphor really tight. The wings are cleverly designed but that doesn’t guarantee they’ll operate for you, they rely on the large peg in the back of all Figma figures that’s used for the stand and Figma really suck at getting that hole the right size for its standard pegs. If you’re using the stand (and why wouldn’t you? You have a flying character, make her fly) you have to use the stand to affix the wings, mine JUST fits through both the hole for the wings’ piece and the hole on Leafa’s back, I had to take it off a minute ago to fit a wing back on and had to use my teeth to get it free, my teeth now hurt. If you’re not using the stand there’s a little plug included to affix the wings, very thoughtful of Max Factory and it goes in a little easier than the stand plug. The stand is standard (pun?) for the line but as I haven’t reviewed one yet: it’s a see-thru plastic arm with three big hinges on it and a little piece that attaches to allow it to fit into the figure – usually just barely. It attaches to a little base, Sword Art Online figures all have hexagonal bases because the franchises uses that shape a lot. They’re functional; the arms can eat up your shelf space though. 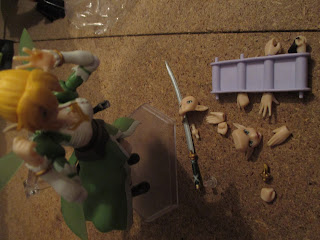 Now it’s time for all the extra pieces! Leafa has 8 extra hands and two extra faces; I’m guessing her wings took up the slot that’s usually given to an affects piece. Her hands are pretty regular choices except two: she has c-grip hands, open hands with closed fingers or open hands with splayed fingers and the two less-standard hands: a wider c-grip hand for holding her amulet and an awesome hand that comes linking fingers with a hand for Kirito that can be attached to that figure – because it wouldn’t be a good representation of Suguha if it didn’t involve incest somewhere. The hand is the exact sort of unusual, out-of-the-box thinking that I like from swappable pieces and accessories so I think it’s awesome, plus as most Figma use the same joints, Asuna can use it too (though the skin-tone might not match 100%). I’m displaying mine holding her sword (because it doesn’t fit in the fucking scabbard) with a splayed fingers hand, if you’re interested. The other two faces are so good I can’t decide which is going to my main face, I like the ‘neutral’ smiling face, but the shouting face makes for good poses and the embarrassed face is just adorable aah I don’t know what to do! Which is high praise really, I wonder if I can fit the faces on other Figma figures? The pegs look the same… that might be a fun way to kill ten minutes sometime…

And this sixth paragraph is why this isn’t a Super Quick Crappy Review. Rounding out her accessories is her sword, the amulet she used to reach Excaliber in the Caliber arc and a little flesh coloured joint, I can’t figure out what to do with that so I’m just gonna leave it in a bag and pretend it doesn’t look like a little bit like an penis oh it’s for attaching the hand-holding hand to Kirito! The sword is fine (other than it, y’know, NOT FITTING IN THE FUCKING SCABBARD) its finely detailed and nicely painted. I was a bit disappointed in the amulet – the amulet piece itself is lovely, cast in transparent plastic as it should but the rope looks really cheap, it’s just a bit of (relatively) thick elastic chopped and tied at the end, it even has fraying end bits, shame on you Chinese factory, would it have killed you to have had your 1p a day workers clip the ends of my accessory? Would it?

To conclude this figure is pretty fucking awesome, there are flaws but there always are with Figma, sadly buying from Max Factory is akin to buying a kebab, you know the risks and accept them because overall the experience is a good one, I wish her wings could move backwards though. Now can we have Lisbeth and Tonki, please? My Leafa needs a Tonki dammit! Because Tonki is adorable! Deluxe Tonki for 2018! Or y’know, maybe Klein.