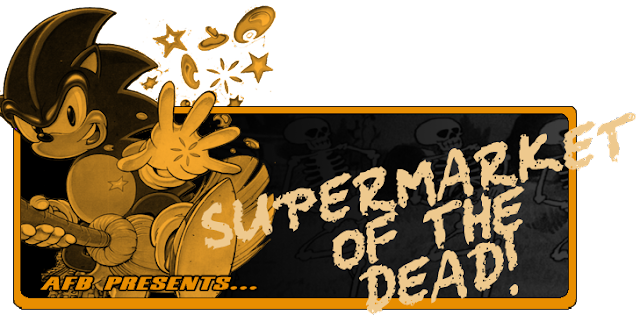 It’s getting near Halloween, and by near I mean about a month – hey if you’re a kid looking forward to Christmas that’s practically tomorrow. I’d like to say that I’ve spent the last month working on spooky posts but I haven’t. I’ve been suffering from a horrible bout of depression and haven’t had the will to do very much except lay in bed, read the internet and occasionally look up wind-up toys, that wind-up toy research day was the height of my activity recently and it only involved…ready for it… reading the internet in bed.
So no I haven’t got anything in the can and I hate myself for that. But I still want to post something spooky thus I’m going to tell you about one of my dreams! That’ll be fun, I really enjoy those creepy YouTube channels (my favourite is currently Cayleigh Elise) so I’m all up for sitting here telling people about scary things because I enjoy it so why wouldn’t everyone?
Read more...
Posted by dwitefry at 23:41 No comments:

So simple looking, yet so complicated

Yeah this isn’t something I thought I’d be writing about yesterday, let alone being up until quarter part 1 in the morning writing about but here it is and here I am, meet the Pocket Pets. If you haven’t heard of the name ‘Pocket Pets’ that’s ok, neither had I before yesterday, but I can almost guarantee you’ve seen one of the toys Tomy released in the line because moulds for these are still being used forty year later– I know the Owl and Penguin are in stores as of this writing. What Pocket Pets were was one of Tomy’s many lines of small wind-up toys, most of these lines are very simple – one set of toys under one name (i.e. Get-Along Gadgets, Snow Funnies), some might get a second wave (The Not-So Grand Band, Flip Floppers), a sequel line (Kid-A-Long Kids to Kid-A-Longs) or perhaps be re-released later on in say a different colour (Pop Overs) but they’re not very complicated. Pocket Pets on the other hand ARE complicated and I had to write the following down to understand them, because understanding the various releases of wind-up toys is how I spend my Friday nights (I’m so alone). Also because Pocket Pets are the most commonly seen Tomy wind-ups on the secondary market - certainly on eBay – so it was worth doing, so are you sitting comfortably? Then here’s my findings:
Read more...
Posted by dwitefry at 07:03 1 comment:

Here’s something I’ve wanted to do for a while, and we’re starting with comic book artist Rob Liefeld because if anything’ll show off the premise of this it’s Rob fucking Liefeld. Liefeld has a terrible reputation, the consensus is that his work is terrible, I think that his work is terrible and I think he’s a horrible human being, not just because I disagree with his political views (he leans right) or for that time when he was forced to leave the company he founded for syphoning funds and talent poaching but because he’s also an egotistical prick. So he’s perfect for what I want to do with my Say Something Nice posts: take a creator I don’t like or who is generally considered suckage incarnate or both and find five things they’ve worked on that didn’t suck – I will be doing Frank Miller.

So who is this man? Liefeld is a comic book penciller who rose to prominence via work at DC Comics’ Hawk & Dove mini-series and Marvel Comics’ X-Men spin-off series The New Mutants and X-Force becoming a ‘superstar artist’. His career arguably peaked when he and several other Marvel artists left to form Image Comics which would publish their creator-owned works, Liefeld’s book Youngblood launched the company in
1992 and was a huge sales success.

Buuut: a critical success he has never been, his art style is bombastic and energetic but he has a list of issues that start with a basic grasp of anatomy (or lack thereof) and failing at telling a story sequentially and go down to very specific things like not being able to draw hands holding swords and putting too many frown lines on everything – and him avoiding drawing feet any time he can. His successes lead to a slew of imitators though and a slew of comics in a similar style: style over substance when there was no style only third-rate imitators of a man who couldn’t draw. So he had a pretty negative influence on the whole industry as well as sucking at his job. In his favour he has had a couple of positive lasting impressions – he created/co-created long lasting and popular characters Cable, Deadpool, Domino and the second Dove and Youngblood’s success gave Image Comics a great start and whatever you may think (or have heard) about early Image the company has gone on to allow publish dozens of high quality series. Anyway are you sitting comfortably? Then I’ll begin.

A shorter post but I found this and thought it should be shared for the benefit of people like myself who grew up with parents (and in my case grandparents) too cheap, to skint, to xenophobic or too scared of flying and sailing to go abroad and thus spent their yearly holiday at a Haven holiday camp – If you went to Butlins or Pontins or British Holidays or wherever then this post isn’t for you, piss off with your bears and red coats and Skegness an’ shit.

I don’t think Holiday Camps exist in America, so for the imaginary American readers: they’re trailer parks that people go to on vacation. It’s not as boring as it sounds, they’re typically located in or near tourist destinations and have their own on-site entertainment, usually a swimming pool, an arcade and a club or clubs that put on entertainment in the evening – singers, dancers, magic acts etc – with a kid’s club just geared towards the children. Butlins is arguably the most famous holiday camp but the biggest company is Haven Holidays, especially since they merged with British Holidays. Before that merger Haven’s kids club was the Tiger Club and it was the home of their mascot Rory the Tiger and his pals, they had entertainment in the evening and in the day patient Haven employees would babysit your kids if you didn’t want them around ruining your holiday - as I hate joining in and had a mother who actually wanted me around I rarely went in the day but I did used to go at night. The centrepiece of the Tiger Club was their weekly Rory Roadshow where full-costume versions of Rory, Anxious the Elephant and Greedy Gorilla would sing and dance to unique songs - most of which I can still remember word-for-word, I can’t remember my own mobile number but I can remember Cocoavamangokiwibananayamyam. 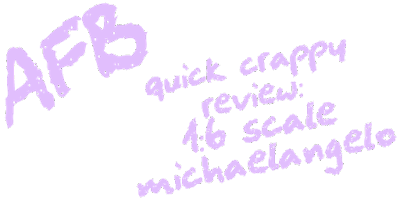 So I decided when I ordered them, ooh a year and a half or so ago now, that I’d review all four of Mondo’s 1:6 Scale figures when they came, but they reuse parts and accessories between them pretty heavily so you’re best to check the reviews of Leo and Don if you read this and think ‘whaaat?’ at any point, those two should help. Anyway Donatello came when I was experiencing a heavy bout of depression and Mikey has turned up while I’m nursing bruised ribs, it’s like Mondo have decided that if they couldn’t get ‘em here on time, they’d make sure their Turtles turned up when they were most needed. Michaelangelo though is actually the least late of the three figures so far, he was due out Quarter 3 2016 and was released Quarter 3 2017 – and yes, a fucking year is an improvement. I bruised my ribs on a roller coaster called Stella’s Revenge at Clacton-on-Sea’s pier because the ride was a half-broken piece of shit manned by a fucking tool – I’m in constant pain: expect swearing. 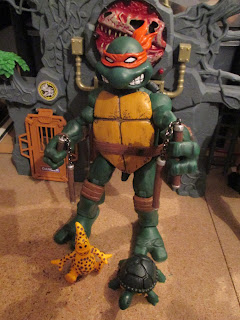 As a quick catch-up, Michaelangelo is the third in Mondo’s Teenage Mutant Ninja Turtles 1:6 Scale Collectable Figures line, the t-shirt company turned expensive merchandise peddler is putting out all four Turtles this year as deluxe 12-inch scale action figures. There is a regular version and a more expensive Mondo Exclusive version (which is a bit of a silly name as both versions were only available via Mondo’s online store) that came with an exclusive accessory but if you subscribed to the line (so you received all four Turtles) you got the Mondo Exclusive at the price of the regular version, which is what I did.
Read more...
Posted by dwitefry at 13:12 No comments: