Examples of Crap I Waste My Money On: MCM & Heroes & Villains Edition!

Ok, so: this IS (technically) an Examples of Crap I Waste My Money on post (because I’m too mentally lazy to write anything else at the moment) but be warned from the start that I am just using it as a vehicle for me to complain about a convention. You have been warned.

At one point, while waiting for the Docklands Light Railway to appear through the heat haze, I was so hot I thought I was going to suffocate, I can’t remember the last time England had heat that felt oppressive, it was thick heat, like Florida or, I dunno, the inside of my oven when I’m doing a roast.
Anyway this weekend was the first two conventions of the season for us Londoners, yes, two: Heroes & Villains Fan Fest in Olympia in Kensington and MCM Comic Con London at the ExCel Centre. The latter is a long-running convention held roughly twice a year and they’re the biggest cons of the calendar, the former is…not. I ended up spending a day in each.
Fuck doing that again.
Not because its knackering – though it is, MCM is exhausting by itself without tacking on another convention in front of it – but because Heroes and Villains is…pathetic, but we’ll get to that. Sticking to format, here’s my haul photo: 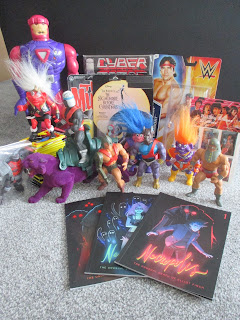 It may seem like I didn’t have a lot to show for 2 days of convention but that’s because my family had me do that thing they do where they give me money, tell me buy presents for my birthday, then take them and wrap them to give to me on my birthday.  So all the nice, shiny new carded toys and posh DC and Marvel trades aren’t technically ‘mine’ yet to photograph and talk about online. Plus I’d decided to make myself spend a little more per item and get some things I really wanted – of course the only thing in that photo that cost over a score was the Sentinel and he’s three X-Men figures high - Even when I splash out I’m a tight bastard, ok?

Email ThisBlogThis!Share to TwitterShare to FacebookShare to Pinterest
Labels: Comics, Examples of Crap I Waste My Money On, He-Man, Radio Wall of Sound, Toys

Examples of Crap I Waste My Money on: Bootsale Report 20!

Play was stopped due to injury today. I squatted down to look at some old rubber monsters (and bought some, the three between the zebra and the witch below were from this stall, I like them so much I’m almost ok with them crippling me) and then couldn’t get up.  I don’t mean it hurt to get up, I mean I physically couldn’t get up, the bloke on the stall had to come and help me get upright (shush). After that my back has been in constant pain, from squatting, an action that uses the legs, only I could hurt my back with my knees (I actually think I hurt it yesterday carrying some fertilizer). I’ve been laying in bed for most of the day watching the WWE Network but I grew tired of sweaty men grabbing each other and once again realised that no matter how hard I wish it, Becky Lynch will not show up and offer to be my girlfriend so I got up and cleaned my ‘haul’ (I really need a less pathetic name), this was somewhat foolish as y’know, constant pain an’ all that. 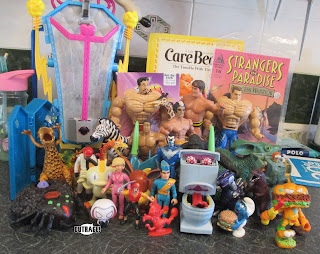 I did pretty damn good, especially as I only got ‘round just over half the bootsale before ending up having to be helped back to the car. I mean that picture includes a monster who is clearly raising the roof, what’s to complain about? Actually what pleases me is that after a few weeks of moaning about not finding a lot of vintage or at least interesting action figures and toys I found almost entirely those – of course this means that this bootsale haul won’t be too full of variety, but on the other hand I’m not subjecting you to a fifteen paragraph sermon on why Strangers in Paradise is one of the greatest comic books ever, believe me when I say I could.  So with that in mind, are you sitting comfortably? Then I’ll being:

A Look At: IDW's Sonic the Hedgehog Volume 3 Issues 1-4

Ok, since 1992 Archie Comics held the licence to produce comic books based on Sonic the Hedgehog in the US (Fleetway had it over here), until they lost it last year in a confusing mess that we still don’t know all about but know that a lawsuit from Scott Fulop (aka Kent Taylor)1 - a former Archie editor and Sonic the Hedgehog writer - filed in the wake of Archie’s old settlement with Ken Penders3 seems to have been a contributing factor. The licence was picked up by IDW because of course it was because IDW are on a quest to have all the licences ever. They did a good thing though by keeping writer Ian Flynn on the book. Flynn has been writing Sonic for years now and is a fan favourite, critical success (though I still slightly prefer Nigel Kitching3) and is seen as the man who turned the old Archie comics around.
As a special event/promotion the first four issues of Sonic the Hedgehog Volume 3, IDW’s first Sonic Book, shipped weekly. All four issues are now out, this is a big thing for the Sonic franchise – the first American Sonic comics not produced by Archie, and I’m a Sonic the Hedgehog obsessive so I’m having a Look At them.  So are you sitting comfortably? Then I’ll begin:

Email ThisBlogThis!Share to TwitterShare to FacebookShare to Pinterest
Labels: A Look At, Comics, Sonic the Hedgehog, Video Games

Examples of Crap I Waste My Money On: Bootsale Report 19!

A bit late due to life but…

It’s bloody hot, I can barely keep my eyes open I’m so tired, I’m listening to a playlist that jumps between Slayer’s ‘Raining Blood’ to Junior Brown’s ‘And My Wife Thinks Your Dead’ via ‘My Boy Lollipop’: what better time could there be to talk about other people’s old crap?
Just getting to the botosale this week was a pain, there’d been an accident on the roundabout the bootsale lies off of and this combined with perfect weather and a bank holiday the next day meant we queued for nearly half an hour just to get near enough to the field for me to get out and walk across to the bootsale itself. The end result was me being later than usual to start looking and being beaten to the punch by at least four bastard dealers who were hoovering up anything remotely collectable and action figure-y and had a serious effect on my self-worth, when you always feel third place you don’t need something as insignificant as bootsales confirming things for you. Here’s their leavings, delightfully posed on my worktop by the Coke bottles and my medication: 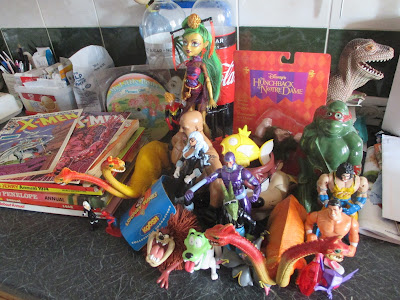 Now I know what you’re thinking (if you were real anyway) so you might as well say it: “dwitefry, you have two of the same dinosaur monster” – YOU THINK I DON’T KNOW?? YOU THINK I’M STUPID ENOUGH TO BUY THE SAME THING TWICE AT THE SAME PLACE WITHIN HALF AN HOUR OF EACH OTHER? If you answered 'yes' to that then you’re correct. No joke, I seriously bought the same dinothing twice by complete accident, I was very tired. They are actually different versions in different rubber from what seems like different time periods but yeah, I still bought the same thing twice.
Anyway are you sitting comfortably? Then I’ll begin: