Examples of Crap I Waste My Money On: LFCC Summer 2018 Edition!

I haven’t been blogging much this year; I just haven’t had the drive
But I bought a load of cool toys at LFCC this summer and they deserve to get a spotlight on as many blogs as possible.

Oh and this allows me to ask this question: what the fuck was up with the queuing this time? Making us walk around one whole side of the venue with just some badly positioned cones to denote where to go? People were pushing in all over the place and the complete lack of fences make you look amateurish and cheap, I don’t want a con that represents my interests to seem like that but more so I don’t want confusing, badly laid-out and badly planned out things negatively affecting my experience before I’m even at the damn experience.
Anyway, it was LFCC, I went on the Saturday which was annoyingly the same day my home town’s Pride parade which meant I couldn’t go and show solidarity because I was too busy buying toys: sorry minority, I need Real Ghostbusters. Shit queue layout aside I had a great time: a huge thunderstorm the night before brought the heatwave that’s been roasting Britain for a month or so down to a bearable level of hot; there was two halls of dealers; the signing area was kept completely separate so neither could make the other extra clogged (though the signing area was much hotter than everywhere else and from what I heard, a common complaint about the show this time); I went with awesome people and bumped into other awesome people; I got to meet WWF legend Jim Ross and Sonic the Comic writer Lew Stringer (who I think I confused, I also think I may have had some BBQ sauce on me at that point from a fucking awesome but fucking messy BBQ Bacon Hotdog, a name I committed to memory because it just sounded so damn good) and I spent a LOT of money: 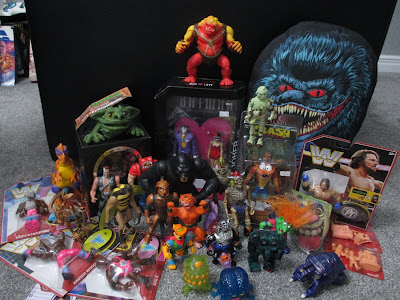 But hey, that’s what saving is for, so you can go and binge until the crippling guilt takes over and you pass on Marvel Legends figures you really want like Spider-Ham and Domino to make you feel better, a kind of shopping self-flagellation.
So are you sitting comfortably? Then I’ll begin:
Read more...
Posted by dwitefry at 06:16 2 comments:

Examples of Crap I Waste My Money On: Bootsale Report 22!

I am desperate for something to occupy my mind, let’s talk about bootsale shit.
It was a cloudless, hot  morning with a cool breeze - which meant it was dusty as fuck but otherwise a pleasant environment to walk around in looking at other people’s old junk in – and the perfect environment to feel completely hopeless, worthless and suicidal in. Really: fuck nice weather when you’re miserable, it’s like nature is being a contrary cunt. Still if it wasn’t nice out I couldn’t have bought knock-off Ninja Turtles and polar bears1 so it was a necessary evil.
So anyway, are you sitting comfortably? Then I’ll begin.