This is either going to make sense or sound prickish, let’s see: it was really quite difficult to do this Things I Waste Other People’s Money On Christmas post this year, not because all my family and friends decided to stop giving me gifts or because everyone gave me crap presents but because of the complete opposite. The way I do these posts - which I respect are just filler posts but I enjoy them – is that I don’t choose ‘the best’ items but instead I choose between five and ten that I can think of a paragraph or so of text for, I joke about this but this is genuinely how I decide what purchases or gifts end up being spotlighted – the problem this year is that everything was on roughly the same level and that means that just about everything qualified, even the random complimentary Fidgit Spinner.
I’m still not satisfied with this, perhaps when I tell you that this article still doesn’t include a three foot light up man nor anything Kinder Egg related nor James May nor a pop-out cartoon Wampa nor a wind-up Chewbacca robot nor a near-life size Ghost Type Pokémon nor a unicorn candle that cries rainbow tears you’ll understand my (first world) issue. But anyway, are you sitting comfortably? Then I’ll begin: 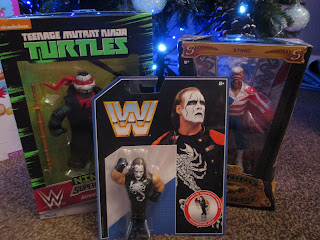 So I Quite Like Sting…
That’s Sting the wrestler not Sting the tantric-sex-having-rainforest-saving-message-in-a-bottle-sending-reggae-ruining-Quadrophenia-and-Alanis-Morissette’s-cover-of-King-of-Pain-are-the-only-good-things-about-him singer Sting (BELL BOY!). I do like Sting, he’s one of my favourite wrestlers, I’ve been a fan since I was a kid (Pre-Hogan WCW used to be shown on terrestrial telly in the UK) but this is actually a complete accident, the only Sting I planned on unwrapping this December 25th was the Hasbro WWF style one in the middle. Then I finally found a Raphael as Sting (who’s been a bitch to find here) in (of all places) Tesco while I was getting the Christmas Day/Boxing Day shopping with my family so my mum bought it for me as a last minute gift THEN I found Defining Moments Sting in Home Bargains while doing last-minute present shopping (I was desperate) and the till went down and would only accept cash and I didn’t want to line up for an ungodly amount of time AGAIN (because everyone else was desperate and in Home Bargains) and the only cash I had was some my grandmother had given me to get some presents for myself earlier in the month that I still had so he became a Christmas Present ‘by necessity’ and as I’d used that money I gave it to nan to wrap up and that’s how I ended up with three Steve Bordens. God I’m boring.