Examples of Crap I Waste My Money On: Bootsale Report 3!*

My Own Summer (Shove it) by the Deftones is my summer anthem - I hate the heat and I hate the sunshine, except on Sunday mornings (and by extension, Saturday nights) because everyone gets up, sees the lovely day to come and decides to go and do a bootsale. My ‘sale of choice, Dunton, was fucking BIG today, so big it filled it’s allotted field and spilled over onto the field usually used only for parking – hundreds of stalls, four times as many buyers – at least 21% of which seemed to be the kind half-naked white men who should never, under any circumstances, ever be topless, at home or in public, their pink skin and bald spots sizzling as the temperature rose from a warm morning to a blistering midday. It was big, it was sweaty, it was dusty, but was it worth it? Well I thought so but I’m not so sure most of you would agree: 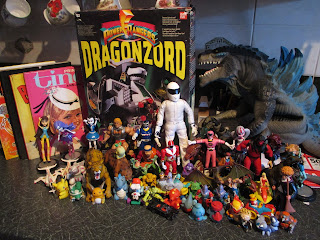 See? You’re probably saying, well if you existed you’d probably be saying, “yes it looks very impressive at first dwitefry, and a boxed Dragonzord and a He-man figure are definitely something to be proud of but after a cursory glance your ‘haul photo’ (and I can’t believe you call it that) is mostly bulked out with fast food prizes, those hollow Pokémon, worthless bootlegs and if I’m not very much mistaken one of the dragons from My Little Pony, also your photography is crap”. You’re absolutely right, despite coming home with around 56 items less than 10 are worth significantly more than I paid for them, although going by eBay, amazon and convention prices I didn’t overpay for anything and the money I saved on those few items I did get significantly cheaper was far more than what I spend overall, but no I’m never going to make money or win credibility from McDonald’s toys and Gen 4 Pokémon merchandise. And I don’t care, mostly because it’s hard to care when you have a tiny plastic Turtwig smiling up at you as you type but also because I don’t go to bootsales to obtain future investments (though it IS possible) or to gain acceptance in the world of ‘adult collectors’ I go because I enjoy it and because I love toys (and old comics, and old video games, and Turtwig), I don’t even know what those two little knights below that knock-off bendy pink ranger (who wonderfully is actually the Migthy Morphin’ Pink Ranger just repainted to look like the Pink Turbo Ranger) are but I thought they were so charming I wanted them in my life and in my house. Though I have no way of justifying this: 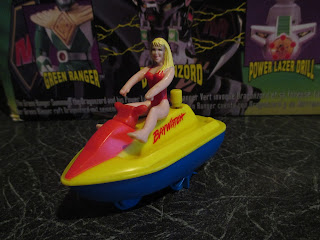 That is the stupidest thing I’ve ever bought.

Anyway are you sitting comfortably? Then I’ll begin: 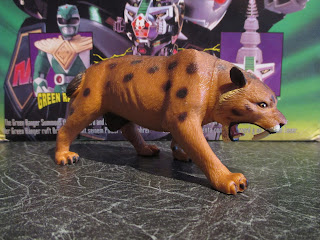 Dong the Sabretooth Tiger!
20p (29¢)
Now I can finally say ‘I bought this because it has a penis’ do you know how long I’ve wanted to use that as an excuse for purchasing something? Dong’s a cool smilodon in his own right, and one should never define someone by their penis, but I did completely buy this because sure enough he has boy parts sculpted and painted. I have never seen an anatomically correct sabretooth tiger; in fact I don’t think I’ve ever seen an anatomically correct extinct animal of any kind, hmmm… 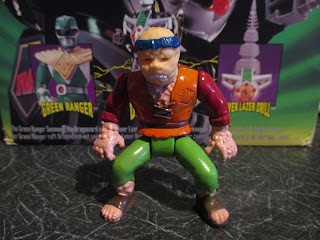 The Killing Beast!
20p (29¢)
At last! You can find info about these weirdos all over the internet, they’re a line of knock-off horror action figures called Monster made by Sungold, the same people who made Galaxy Warriors, and date back to around the early 1990s. I uncovered these things in perhaps the most unusual way possible, via a funfair. The holiday camp I went to every year as a child, Devon Cliffs, once had its own funfair (this was as awesome as it sounds; it even had its own kiddie roller coaster!) complete with sideshows, the sideshows were run by local families and one, where you paid to choose cards from a bucket and tore open said cards to see if you won, I used to play all the time because they had the best booby prizes, I didn’t give a shit if I won (I think I won many twice?) because loosing got you better prizes – why would I want a huge cuddly dog when I could win Freddy Krueger dressed as Where’s Wally (Waldo). They had all six of the 5” Monster action figures, and all of the 2” Monster mini-figures (which came carded in pairs) and I ‘won’ them all. The Killing Beast was the only one of the 5” line that I found I no longer had when I sorted out all my old boxes, presumably the victim of the Crash Dummies Box Disaster™, of course he’s my favourite and of course he’s the figure that seems to show up the least online and of course when he does he’s far too expensive for my brain to allow me to buy him (around £15-£20). Today my patience paid off, I got him for a third of the price of a Mars Bar and no one has ever been happier about buying a man made of rice pudding and dressed like one of Robin Hood’s Merry Men. 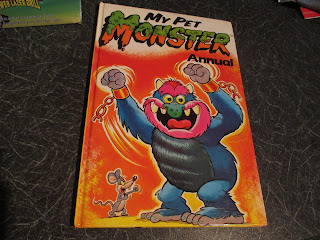 My Pet Monster Annual!
£1 ($1.44)
The British publishing industry has a long history of releasing these hardback annuals every Christmas, one that endures today, and they’re successful – very successful – so successful that they give annuals to just about anything kids might like, regardless of if they have a comic book or official magazine being published at the time, in fact it’s just considered a thing no one questions that a British comic will continue to have annuals long after the series has ended (currently The Dandy still puts out an annual despite being cancelled a few years ago, and  Roy of the Rovers still have annuals despite having been cancelled for decades), I have annuals for Gladiators (known as American Gladiators in, well, America) – I’d say that’s like having an for American Idol or The X-Factor but those actually exist too (well it was called Pop Idol over here). Even knowing all this I was still surprised to see My Pet Monster, one of the best soft toys ever devised by humans, got an annual but of course he would have, that doesn’t make its existence any less spectacular though. The cover alone was worth a quid, no fuck that, the mere fact that it is a thing is worth a quid, I’d pay a quid just to look at this. Though Monster looks more like his toy (very common in British annuals and comics even if the property had a cartoon, like say He-Man did) most of the stories seem to be based on that horrible cartoon that people get all nostalgic for (and draw confusing hentai of), I actually like that about it and in true second-hand annual fashion, all of the puzzles have been filled in, in biro. 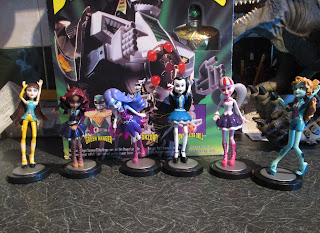 Monster High Knock-Offs!
£3 ($4.33) the set
Oh I was all over these. There’s been tons of 12” Monster High knock-offs since the line took off – Horror Students or whatever – but I’ve never seen anything like these before. These are moulded from the Monster High mini-figures which I’ll admit I didn’t know existed until just now but have already made it my life’s mission to track down a complete set of them, which is nice because with the new head sculpt I actually thought I was done with the franchise, they’re pretty soft plastic, have four points of articulation and stand around four inches high – and come with shrunken down versions of the Monster High signature comb (which even still reads ‘Monster High’) despite not having rooted hair… and some of them are really good; Spectra, Howleen and Lagoona could almost pass for official product. I do wonder why after keeping so close with the rest they decided to say ‘fuck it’ and colour Frankie and Draculaura so weird, maybe Mattel are just more sue-happy when it comes to those two, I guess they are kind of the series’ mascots, but I am so fond of random weird repaints that they both make me as happy as the more accurate ones, maybe even more – I really want an official Draculaura 12” in those colours, I think they should call it ‘Ice Scream Parlour Janitor Draculaura’. 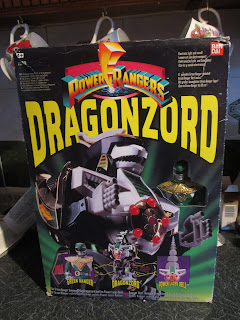 Boxed Dragonzord!
£10 ($14.43)
My showiest find by far, about two years ago while sorting out all my old toys I uncovered a problem I’d been yet to rectify: I only had half a Dragonzord, the coolest Zord in Power Rangers history. I’d had him in Mega Dragonzord mode (basically the Megazord wears him like a poncho) that the central part (that lights up) had fucked off somewhere, never to return. This made me sad, because again the Dragonzord is the coolest zord in Power Rangers history and driven by the coolest Ranger in Power Rangers history, the walking awesome that is Tommy Oliver. Tangent: I was able to meet David Jason Frank briefly at a convention, sadly I can’t say he made much of an impression – he was very rushed because the whole con wanted to meet him (because he’s fucking Tommy Oliver) and I was insanely nervous – also I’d just handed him a carded bendy Green Ranger from Justoys to sign and he was thoroughly puzzled by it and that it was this piece of shit that I wanted him to sign, I don’t think he knew it even existed until this point.  Anyway the original Mighty Morphin’ zords are not so cheap these days, not that they were especially cheap when they came out, but mum was paying for them then, they’re certainly not a tenner, but this great bargain is tinged with sadness, one of my most reliable toy sellers at the bootsale – who I’ve dubbed Dennis Waterman – is getting out of the toy selling business! Most of his stall was birthday cards and shit, terrible! 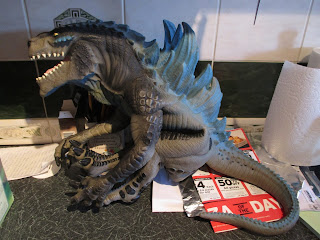 Godzilla Puppet!
£2 ($2.89)
Yeah the 1990s American Godzilla was utterly awful – as most things with Mathew Broderick are – but this is a mutated dinosaur hand puppet dammit, if you don’t have the desire to stick your hand up a monstrous t-rex’s arse  and make him mouth along with Marc Boland then you need to sort your priorities out, mate. I had planned to wear it around the entire bootsale (I bought it about three isles in) and have it talk for me the whole way but it was explained to me this would lead to me being disowned by everyone who knows me, so instead the nice mad lady who refuses to haggle no matter what gave me a nice binliner to cart him around in – rubber Godzilla puppets are surprisingly heavy and awkward unbagged – after I spent far too much money on her stall. This picture, just so you know, wasn’t supposed to look like Godzilla was taking a shit on our post and laughing about it but…I guess…at least he’s near the kitchen roll?

And I’m done, this post has already taken me half an hour longer than I’d planned because I had to stop and pick up a box full of packing peanuts that had blown all over the garden so I’m off to do something else, that something else might be playing with small Pokémon toys.
Posted by dwitefry at 11:34

Email ThisBlogThis!Share to TwitterShare to FacebookShare to Pinterest
Labels: Bootsale Report, Examples of Crap I Waste My Money On, Horror, Toys