Seven Examples of Things I Waste My Money On: Bootsale Report 6!*

After far too long a break, I returned to Dunton Bootsale for another round of spending money on things other people don’t want, but still want some money for. Today I did this on around an hour’s sleep so spent the morning wandering the dusty lines of pasting tables, ground sheets and storage crates feeling like I was in the world’s most specific Circarama film: detached from reality and not quite able to take in everything. I was also being haunted by some bloke and his two children who kept pace with me nearly the whole time and were only interested, and I mean ONLY interested, in football, so stuck themselves in front me of at seemingly every stall searching for old Headliners and Match Stars while I just wanted the price on some Power Rangers. Tolerance at bootsales is certainly affected by how much you give a shit about what the annoying person is searching under the tables for, and if you’ve slept for less time than it takes to cook a baked potato. It didn’t feel like it when I was walking around, but then I couldn’t feel much of anything, but I did surprisingly well: 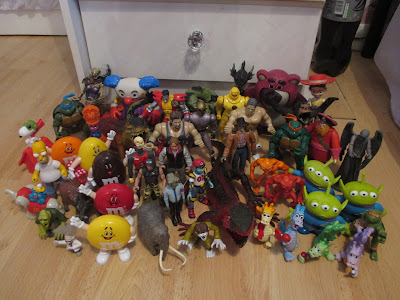 What it isn’t is very varied, if you’ve read any of these posts before you may see that I generally acquire quite a cross section of other people’s junk but today it was all toys and all under 5 inches, so while that photo may not be the  most visually interesting picture, it is crammed with a load of great buys.
This was a Dirty Week, sometimes bootsale items are all like they’ve just come out of their boxes, sometimes it’s like they’ve spent 10 years buried in someone’s garden, today was the latter. Those Blackstar demons were sticky, bootsale sellers I don’t expect you to waste your time scrubbing your wears when you know damn well people will buy them if you do or don’t but there should be some ground rules about how filthy something should be – run the soft toys through the washing machine, run the clothes through the washing machine and if something’s sticky make it unsticky – especially if you’re going to come off like some big shot toy dealer. If you were a big shot toy dealer sir then you’d know one of the very earliest things toy dealers find out about toy collectors – they don’t like sticky things. Anyway, are you sitting comfortably? Then I’ll begin. 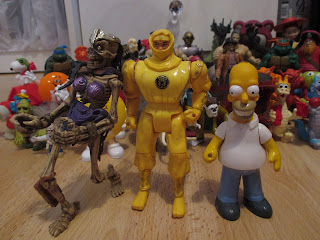 Set Completers!
£2.50 ($3.23) for all three
I don’t often highlight when I complete a set because it’s really only important to me and I think I’m pushing my luck with how interesting these Examples of Crap I Waste My Money on posts are as it is but occasionally it’s nice to show-off, plus I get to post a picture featuring a living skeleton, a ninja and Homer Simpson, that opportunity doesn’t arrive very often. I’ve actually had a good run of completing various sets and sub-sets this summer, fuck me this is boring, this isn’t interesting see? You don’t care if I now own all of the figures from Jim Henson’s Dinosaurs; you only vaguely care about Jim Henson’s Dinosaurs period, why did I decide to write this? Anyway this completes my Skeleton Warriors, Mattel Simpsons and Ninja Power Rangers sets, the Yellow Ninja Ranger looks in way worse condition in high res photos… 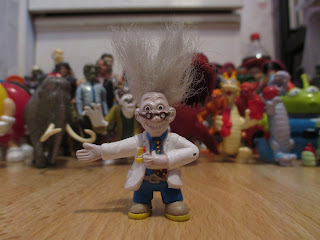 Professor Weeto!
30p (39¢)
Yeah, I’m always trying to set a new record for ‘stupidest thing highlighted on this blog’ but you want to know something? I’ve been looking for one of these since I started bootsailing again, yes, a tiny troll of what looks like a paedophile. This man is Professor Weeto, the mascot for Weetos, a mix of Coco-Pops and Honey Nut Loops produced by Weetabix, and these trolls were given away in packets of Weetos back during another periodic troll doll fad. We had Weetos very rarely in my house when I was small, which is odd because they’re one of very few cereals I really like (I don’t dislike cereals, I’m just kind of lukewarm to them, with the exception of Weetos, Count Chocula and Cookie Crunch), so I missed out on having a tiny Professor Weeto Norfin Troll, now, 20 years later, I have rectified this – my life has no meaning. 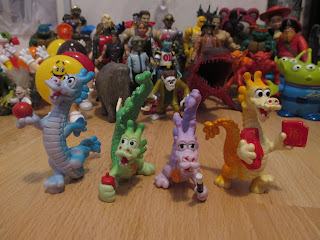 McDonald’s Dragons!
£1.20 ($1.55) for all four
I’ve not been avoiding adding the McDonald’s Dragons to my HUGE box of fast food and cereal toys because I have some kind of horrible vendetta against them, I’ve been avoiding them because they’re one of the few McDonald’s toys that bootsale sellers seem to think are worth money (along with those poxy Beanie Babies). Most McDonald’s toys fall somewhere between 20p and 50p at bootsales – reaching £1 only if they’ve been dumped in a ‘everything’s £1’ box with assorted other action figures, large bugs and dinosaurs - except for Beanie Babies and McDonald’s Dragons, most people want more than what I paid for all of these Dragons for just one, but they’re rarely sold in singles anyway, instead they can usually be found in incomplete sets with the seller telling you they’re COLLECTIBLE and that is why they want £10 for six McDonalds toys, four of which are the same two dragons. And they always tell you this like you don’t know and are some kind of irritatingly ignorant yokel, and then they huff when you put them back on the table. Today was the complete opposite, four dragons over two stalls, 30p each, lovely. I particularly like the orange one giving out Chinese menus, he looks so pleased you’ve just walked into the restaurant because you’ll be really happy to have his menus, I imagine him speaking in the voice of Doug the dog from Up!. 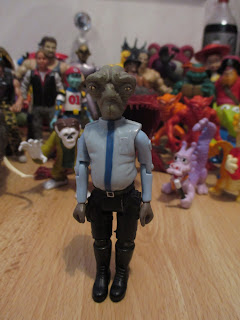 The Most Common Action Figure At Bootsales, Ever!
50p (65¢)
Meet Captain Podly, from Gerry Anderson’s Space Precinct, released in 1994 by Vivid Imaginations I don’t think these toys were released in America but they were released in the UK – and no one bough them. Vivid had had lots of success with their Captain Scarlet and Stingray toys (which are in the same scale and style as the Captain here); both by Gerry Anderson whose old shows Thunderbirds, Captain Scarlet & The Mysterons and Stingray had re-exploded in popularity in the early 90’s. So it makes sense that they thought Anderson’s new show would be a sure thing. It wasn’t. The show was pretty popular over here (and I really enjoy it) but not the fad Thunderbirds had been nor was it really aimed at kids, feeling more like The Next Generation of Babylon Five, and there are still discount and cheap shops around the coast that have carded Space Precinct toys on clearance to this day. I’m not exaggerating for effect or comedy when I say that Captain Podly is at every bootsale I go to, he genuinely is, and spotting Podly has become something I do each time, he always turns up. However I was shocked to find out that I didn’t in fact own him, nor any Space Precinct toys, they’re so common I just assumed I already owned them all, I wonder where my old ones went? I had the Cruiser and everything. So today I actually had the pleasure of buying the most common action figure at bootsales, I’ve a feeling this figure has been owned exclusively by a succession of frustrated dealers since bootsale season 1997. 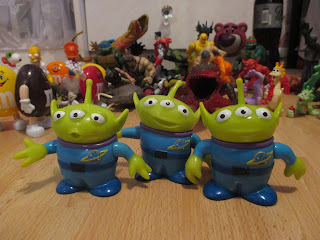 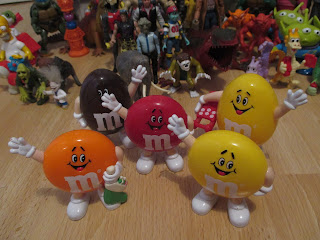 M&Ms Candy Dispensers!
£5 ($6.46) the lot
This was something I didn’t know I wanted until I saw them, a green one of these has been floating around my toy boxes since, well, since 1991 according to eBay, I’ve seen it so many times I’ve become completely desensitized to it, I never even once though there might be different colours or holiday versions or even peanut versions because I never really thought about the thing at all but these things are all over eBay and Google image searches, turns out there’s a red, yellow, green, brown, red and orange for each mould. I had no idea until I found a stall displaying a whole herd of them, had I known I might not have been so visibly shocked and excited, oh well I’ll never see the bloke again. What’s extra nice about this lot is it includes two Christmas versions (the yellow Peanut M&M has Rosebud a sledge and the orange regular M&M has a stocking, see?), I just bought one of every colour the seller had but wound up with bonus Christmas, not a bad deal really. 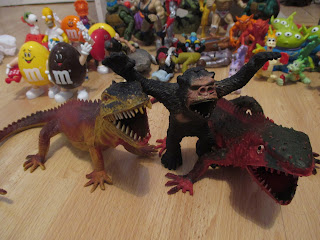 Cheap, Crappy Animals!
£5 ($6.46) for all three
I talk a lot of shit about a lot of things on this blog so I can’t remember if I’ve made my love for these sort of toys public, if I haven’t consider this my crappy rubber animal coming out party, I shall be celebrating with two iguana monsters and a knock-off of a knock-off King Kong, we all have hats. These big, hard rubber hollow toys as put out by the likes of Dor Mei, Chitech and Imperial are one of the joys of bootsailing, they’re not worth anything, they’re plentiful and cheap, no one ever says ‘they’re COLLECTIBLE’ at you, and they always give maximum amounts of that feeling you used to get when you got a new toy as a kid, ‘new toy glee’ we’ll call it for now. The red and green lizard though is a little special, he’s Fire Lizard from The Warrior Beasts (from Remco) from 1982, which may well be the first He-man knock-offs of all time (along with their sister line Lost World of the Warlord, released at the same time), I already have the frilled Fire Lizard so now I have both, this makes up for me not buying the Galaxy Warriors mammoth because I was so tired by that point I couldn’t decide if it was what I thought it was or wasn’t. The Gorilla’s also doing a lot for me, rubber gorillas who exist in that ‘not King Kong but could be King Kong and would totally have been used as King Kong by kids’ grey area are one of my slightly subtler toy collecting obsessions due to the infrequency the turn up when I’m anywhere but a bootsale, so few of my friends and wider family get to see me get excited about buying a 35 year old cheap rubber ape, so I thought I’d put it online for everyone who’s ever met me to read. Good job all but a few shun this blog for the piece of shit it is right? Wouldn’t want kids I went to school with thinking I was weird or anything.

I’m ending this now, I can’t top three cheap rubber animals in one day, I’m going to leave you with a picture of a plush E.T. meeting the Toy Story Aliens, because I forgot to put the E.T. in the ‘haul photo’ group shot and felt guilty so gave him his own photo, but I can’t think of a whole paragraph about a £1 E.T. UFO machine prize, thanks for reading.

Email ThisBlogThis!Share to TwitterShare to FacebookShare to Pinterest
Labels: Bootsale Report, Examples of Crap I Waste My Money On, Nummy Treats, Toys, TV