He fell flat on his arse! 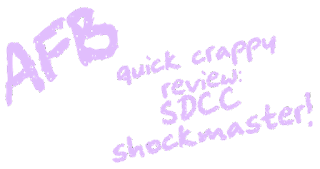 In American Professional Wrestling, which has its own language to feel special, a ‘botch’ (from ‘botched up’) is a mistake. Everyone makes mistakes but because timing is so key to making wrestling believable botches tend to be a little more noticeable as even small ones can completely ruin the suspension of disbelief and a viewer’s immersion and harm the credibly of the wrestler, sometimes for years, sometimes permanently, and sometimes it they can permanently harm a wrestler. The wrestling fandom however has developed a perverse habit of celebrating botches in all their glory - the long running Botchemania video series, compilation videos of hilarious outtakes and mistakes that act as a Pro Wrestling version of You’ve Been Framed, being the most notable example of this – and if this celebration has a King of Fools, it’s The Shockmaster. 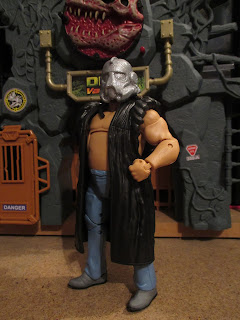 Mattel’s Shockmaster figure was the WWE exclusive for San Diego Comic Con International 2016, available at the convention itself and then sold on Mattycollector.com afterwards, which is where I got mine because I’m too poor and too foreign to get to San Diego.  It’s being sold under the WWE Elite Flashback line name, which is a sub-line of WWE Elite which is itself the mid-price figure range for Mattel’s WWE line. But who the fuck is the Shockmaster?

Well you might know him better as Typhoon, or possibly Tugboat? His name is Fred Ottman and other than being the man inside the Shockmaster’s helmet he’s mostly known for his stint in the WWF as part of the Natural Disasters tag team with Earthquake (when he was Typhoon, the one in the red singlet). Ottman left the WWF after Earthquake’s departure killed his career there. Like Earthquake and many, MANY other wrestlers from WWF he went to WCW, the company’s main rival - though in 1993 (when all this went down) it wasn’t the threat it would be later during the Monday Night Wars of 1996-2000. His new identity was ‘The Shockmaster’ and his debut was going to make him the star that his new costume couldn’t: he was the good guys mystery partner for the War Games match set to headline the first Fall Brawl pay-per-view where he’d be working with Sting, Davey Boy Smith and Dustin Rhodes (Goldust) and going up against Sid Vicious, Vader and the tag team Harlem Heat. The original plan was, I think, to have two big heroes and a big ‘face’ tag team versus two big villains and a big ‘heel’ tag-team but Hawk got injured so the Road Warriors pulled out and Rhodes and the Shockmaster replaced them. So the Shockmaster may have looked like he made his costume the night before Halloween but he was going into a big match with some of the company’s biggest stars with a shitload of hype behind him, in fact he did participate in and win that match but it was for naught, because of his utterly botched debut. You can find this all over the internet but I’ll recap so you don’t have to do any work: live at the Clash of the Champions XXIV special, upon demands from Harlem Heat and Sid Vicious, Sting and Davey Boy revealed their mystery partner – who was supposed to burst through a wall after a blaze of pyrotechnics and look awesome. Instead he tripped over a piece of wood behind the scenes and fell through the wall, fell on his face (literally) and his helmet fell off – the crowd instantly died, so his recovery (pathetic as it is) is done to complete silence and then to the reactions from his fellow wrestlers, including an embarrassed Rick Flair, a pissed off Booker T and a British Bulldog laughing his arse off. Then the show just resumes, the crowd are jeering and Sid Vicious is acting like it never happened, it’s weird, it’s cringy, and it’s become infamous in the fandom. Here it is:

There’s very few figures I don’t want to take out of the packet but this is one of them, so I’m going to uncharacteristically review the packaging too – it’s so good. Itt's Shockmaster helmet sparkly and Shocky is positioned upside-down and back to front with a unique background that mimics the yellow wall and tear he made when he fell through it, see, so good. The back has a huge gash in it that matches up with the background so you can see Ottman’s shocked face, it’s perfect and I’m both surprised and delighted that Mattel went to the trouble. WWE might be their most successful boy's line but generally it feels like they don’t give a toss and are trying to cut as many corners as possible to save as many pennies as possible, so making a completely unique box – even if there is a precedent for them doing this with SDCC items – feels like nice change of pace. Better still that backdrop is removable, so if you keep your figures out on a shelf/in a cabinet like I do, he can have it as an additional accessory/scenery piece. Better still yet the Elite box design is such that UNLKE THE MONSTER HIGH PACKAGING you can easily slip the figure out without wrecking the box, so if you’re careful you can alternate between posed on the shelf and falling in the box without resorting to LOTS of sticky tape. 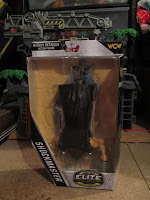 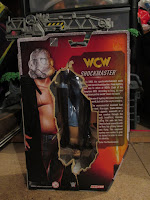 The figure itself is pretty standard for an Elite release and that’s bloody brilliant, I’ll explain: this is a joke figure but the figure itself isn’t a joke, the disrespect lavished on The Shockmaster hasn’t carried over to the creation of his toy and this is exactly what I want. Regardless of how silly the subject of the ‘adult collectors’ figure’ (we really need a less ridiculous name for these things) I want the toy itself to be the best possible quality, and this doesn’t disappoint, this is the best possible Shockmaster figure WWE Elite could produce (amazingly this isn’t the first Shockmaster figure) and damn right. He has the max amount of articulation points including the ab crunch (even though he has no abs), bicep swivels, thigh cuts, double jointed knees and incredibly articulated ankles, these things can go any way they like, my ankles aren’t this articulated! They’re very similar to the ‘clankles’ people fought to get rid of from Masters of the Universe Classics and their forward and backward movement is hampered by the bottoms of his jeans but said jeans also hide the ugly fucking joint so swings and roundabouts. I don’t know enough about WWE ‘bucks’ to say for certain but I’d take a guess and say that all Mattel made new was the head, coat and helmet – I’d be inclined to believe the crotch and feet might be new because they’re very close to screen accurate, but again I don’t know enough to say for certain. The head is beautiful, and that may be the first time that word has ever been used to describe Fred Ottman without some kind of qualifying prefix like ‘not fucking’, not only is it a good likeness but it’s utterly shocked, it looks like the face a man would make when tripping up through a fake wall and realising he’d torpedoed his career at a major wrestling promotion, how fitting. The hair and coat are both very soft and don’t hinder articulation much by themselves but combined they do make it hard for him to look up – though that’s a little fitting I guess. Actually just about all the pieces on the figure are really nice looking, oh except the wrist articulation which his functional but bloody ugly. 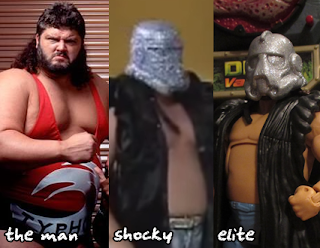 He comes with the only accessory he needs (except maybe a CD of the British Bulldog saying ‘he fell flat on his arse’ over and over) – his glittery helmet. It genuinely was a Star Wars Stormtrooper helmet sprayed silver and covered in glitter, which is a problem for Mattel as Hasbro have the rights to Star Wars. They’ve done a good job of keeping it ‘close enough to not get sued’, notably they’ve added a fin. Star Wars minutiae aside it’s not a separate head but a genuine accessory that fits over the figure’s head, it fits about as well as the real one did, which may be damning with faint praise. Honestly it’s a bit flimsy, it’s thin soft plastic and was almost stretched out of shape just by removing it from the blister, this I’m sure helps it fit on the head but it worries me, I don’t want a stretched out of shape fake Stormtrooper helmet and I’m sure the fake Stormtrooper doesn’t either (that may be a dick joke, I’m not sure). Still the glitter doesn’t come off, I do expect collectors’ items to be better than the average 50p anniversary card but it still amazes me that this is physically possible. 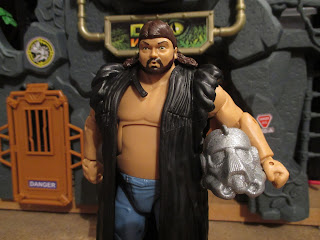 And there you are, I am genuinely delighted by this figure. I want my Shockmaster to look completely stupid or completely regal depending on how you a) pose him and b) feel that afternoon and this does that perfect. In fact I’d say it exceeds expectations for a Shockmaster figure and that’s great, the brilliant packaging being the cherry on top of the cake, a cake that has fallen over and been laughed at by Bret Hart’s brother-in-law. 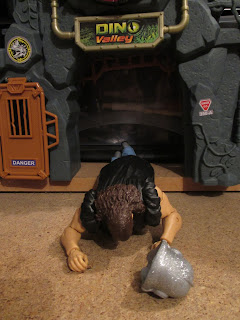