I bought The Infinity Gauntlet as a complete set from Camden during the earliest days of THE DARK TIMES™ - also known as my Comic Collector Years – and it has been one of my favourite stories since then, it’s an utterly epic tale involving the battle between space Jesus and the man who would literally court death with a battle that comes to involve such power that the human mind and human comic page cannot comprehend it and can only give a rough approximation, it has one of Captain America’s finest moments. So what better way to pay tribute to this than via the medium of dodge’ems? 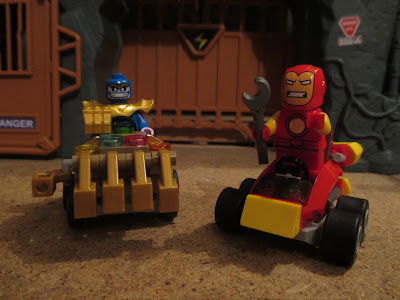 I genuinely enjoy making Lego sets but they’re expensive for what they are, there’s a bit of social stigma still and I don’t really have the room to give them their proper dues but if I ever get a toy room I’m so eBaying their Ewok Village set and not eating for a fortnight. Sometimes though something comes out that I just have to have, sometimes they release something as amazing as an Infinity Gauntletmobile. I kind of feel like I don’t even have to continue with the review after saying such words but I suppose I should put some effort in. New for 2017 (as of this writing they’re not even on Brickapedia yet, though they are on Brickset [http://brickset.com/sets/76072-1/Mighty-Micros-Iron-Man-vs-Thanos]) is the Iron Man vs Thanos set from the Marvel Superheroes Mighty Micros sub-line, Mighty Micros are basically ‘What if Marvel & DC licenced their characters for Mario Kart’ and if you’re not down with that concept then I worry you may have no sense of fun 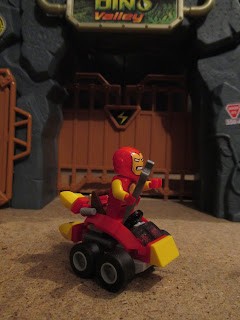 We’ll do the Ironmobile first because it’s less interesting, but y’know compared to an Infinity Gauntletmobile so very many things are. Being so small the cart is made up of fewer pieces that are comparatively larger (that is, larger compared to the overall size of the final vehicle) so building it didn’t quite have that fascination factor I like to get from Lego, as I see how these clever fellows have managed to make these things out of little (mostly) square children’s building blocks but other than that – and that I pricked my finger on one of the boosters though that’s more my physics warping clumsiness than anything else – I don’t have too much to complain about when it comes to building, wheels are my least favourite thing to make in Lego but these are the big chunky monster truck wheels that are far less irritating for me so yeah, moving on. Design wise it’s a little generic, maybe it seems more generic than it would normally because it’s coming with a car that’s a giant gold hand and the colour scheme and overall design does say ‘Iron Man’ it’s it just feels like it’s lacking something. Not so with the Iron Man mini-figure who feels exceptionally good value for such a small set: first his helmet can be removed to reveal a smirking Tony Star head and be swapped out with hair piece to give us a full unhelmted head for when Robert Downey Jr wants more face time. He also comes with a giant spanner because fun and two clear pieces to simulate his jet boots, how great is that? However do not put him into his car wearing them (so you don’t loose them when while he’s in the car, obviously) because they will get stuck and you’ll have to take the car apart to get them out, not that I did that or anything. According to Brickset you can use on of the small see-though studs as a repulsor ray but I couldn’t get any stud included with the set to fit in his hand. It’s just so much stuff for a pack-in mini-figure and if all of it was cut I almost certainly wouldn’t have felt hard done by, I greatly appreciate all of it Lego. 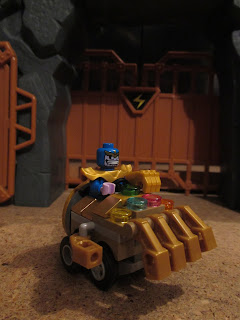 Now we have the real star of the show, and even though it’s only March, I feel quite comfortable saying it may well be the star of Lego’s entire 2017 output, whoever came up with this has the best way of thinking, it’s the INFINITY GAUNTLETMOBILE!  Can you tell I like this thing? I’m not sure why I like it quite so much as I do, it’s connection to The Infinity Gauntlet comic is obviously one thing and you know if Thanos had a Green Lantern ring he’d totally make this, but mostly it’s somehow both really funny and completely awesome at the same time. It’s even better in practice too, as this has a complete set of articulated fingers, allowing you to point, make a fist and more importantly, swear. Building it was also a lot more satisfying than the Ironmobile really giving me that ‘wow they made that from that?’ reaction as I built a gold fist car out of bits from Lego Castle, though I found this one a bit fiddlier, it uses a lot of smaller parts as is rather than combining them to make larger parts that are then put together (as a larger set would) and that sort of thing really penalizes you for having adult-sized hands, the set’s aged 5 to 12 and I believe it: the ideal thickness for fingers for making this motor is roughly one Bachelor’s Super Noodle. It also has the regular sized wheels and I loathe these bloody things, I will be fair to the bastard things and admit that the softer rubber used in today’s sets makes them slightly less frustrating to put together (or back together) than they used to be and will also freely admit that my lack of ability plays a part in my hatred so it’s not all the wheels’ fault but getting the middles into those tires is and has always been a painful and difficult experience and I resent the fucking things. Moving away the Thanos Mini-figure, Thanos has had a figure before but it wasn’t a standard Mini-Figure, rather one of those larger figures like the Hulk or the Wampa or whatever and so I believe this is his first straight-up Mini-Figure mini-figure and it is so happy. I’m torn on whether I prefer this or the original version, the original version had size to it but this is a Thanos in the Lego Mini-Figure style proper and both of those things appeal to me in pretty much equal measures. He isn’t quite as tricked out as his opponent in Marvel Wacky Races but he comes with a Lego Infinity Gauntlet to hold and oh my god a Lego Infinite Gauntlet! Has this been included somewhere before? It probably has but it’s my first time of seeing it and yes, yes, yes, yes, yes. Excitement over this accessory adequately expressed? Good. His shoulder armour’s an additional piece that I guess is unique, so wow, Lego tooled something new for him, bonus.

That entire review felt completely unfocussed and badly paced, hopefully no one will notice. In conclusion? This was £9 and that’s a small price to pay for an INFINITY GAUNTLET MOBILE let alone two small Lego vehicles (that move surprisingly fast), for parents that’s getting two toy cars, two mini-figures and the model kit for less than a single Star Wars figure, of course these hurt a lot more when you step on them but you can’t have everything. So a good deal and one of the funnest ideas Lego has had since they got the Marvel & DC licences, go buy one of these sets now, just if you’re an adult get the nearest 10 year old to build it on your instructions because your hands are too big, no, no, they’re too big, I don’t care, I know I don’t know you but I can assure you, unless you’re 12 or under, they’re too big. 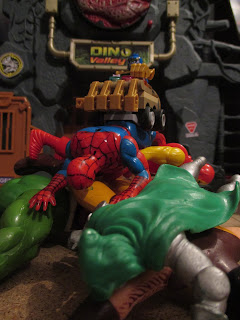