Just a quick one, but we need to talk about this knock-off figure. 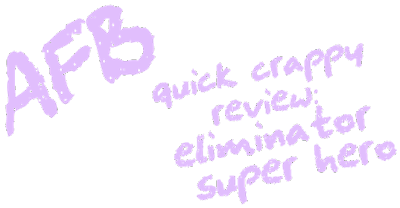 B&M Bargains are a chain of large discount stores from Lancashire whose logo looks like a brand of 1970s washing powder. They sell a wide variety of crap from mainstream American food brands to home furnishings to crap knock-off action figures. Chelmsford has a B&M the size of a warehouse (it used to be a Tesco), into which we popped and I bought today’s study, meet the Eliminator Super Hero! 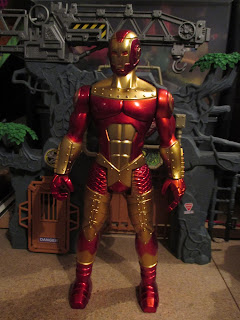 I’m a fairly large fan of Toy Biz’s Marvel figures from the 1990s, especially their 10” lines, Eliminator Super Hero has almost certainly been manufactured to cash in on the sales success of the 12” Titan Heroes line (y’know, the really cheap 12” figures Spider-Man and Star Wars have?) but his stance, proportions and just overall width make ESH feel far closer to those old Toy Biz behemoths than any current product. He’d deliciously retro; though I think it’s more a case of being behind the times. Anyway according to his box he was made for B&M though it doesn’t say who buy, which I believe is a clever ploy to avoid the inevitable summons. Speaking of the box, I don’t normally do packaging but with knock-off toys they’re often one of the best parts and this one’s surprisingly professional, it features two images of our Eliminator Super Hero in two poses traced from stock images of Iron Man taken from Google Image search and while the colouring is completely different (it’s the colours scheme for the Iron Patriot, who appeared in Iron Man 3 - that is not a coincidence) the actual armour is spot is on to the figure. Given the usual quality of bootleg packaging it’s surprising it’s not a picture of Batman, getting pieces of accurate commissioned artwork (I’m guessing they also sell this in the Iron Patriot colours scheme) you might as well consider this a Marvel Legends release. 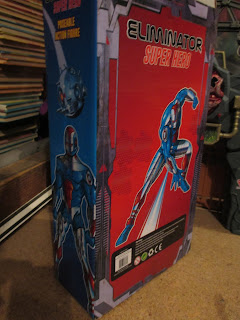 The figure itself is wonderful, when knock-off toys get to this size they feel like humanoid Easter eggs and I love that shit, this is especially true on ESH’s hips, you can’t stroke an Easter egg for too long, it’ll melt, but I can stroke fake iron man’s thighs all day. He is exceptionally metallic too and very shiny, in fact he look and feels like Christmas and I may even use him as a decoration, of course paint has worn off just through the non-contact sport of being in a box but then what’d you expect? I’m just pleased he has paint-apps, let alone this many and this many that stay (roughly) in the lines – he’s painted back and front too, this is truly an elite knock-off. Design wise he’s there to do the job – look like Iron Man but not enough like Iron Man to incur lawsuits, I’d truly like to meet the man who looked at the Iron Man suit and thought ‘what that really needs is an Iron Vagina’ – the man needs me to buy him a beer. Also if he’s not a robot – and honestly I want him to be – his helmet is impossible, the wearer would have to have no nose, or chin, or skull. Articulation wise he’s really vey functional, he has swivels at the neck, shoulders and wrists and hinges at the thighs, that’s not only a lot for the type of toy he is but more than the Titan Heroes line has. Really there’s very little to complain about, his hands are huge but they’re also far more robot-y than Iron Man’s so it kind of evens out, also his shoulder armour is supposed to look hi-tech but it really just looks like something from Willy Wonka’s Chocolate Factory. Shall we go onto accessories? 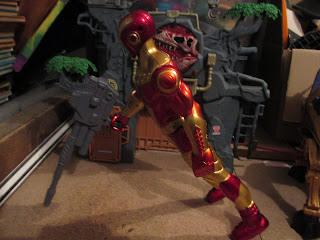 Oh yes, a £2.50 Iron Man knock-off has accessories, in fact he has three and they’re all huge (and undoubtedly reused). What I’m assuming to be his primary weapon, as it was packaged next to the c-grip hand and I used to play Iron Man and War Machine a lot on Capcom’s fighting games and they produced some big-ass weaponry, is a gun so huge it’d even give Cable penis envy; he can hold it but he really can’t stand while doing so unless you point it down and use it to balance him, so unless EHS spends all his career hunting down rouge DIglett gangs it’s not that functional. His other gun can only be described as a deluxe Super Soaker -  after the brand was absorbed into Nerf, this one our hero can stand up and hold but the handle’s too small for his gargantuan robot mitts so it just swings ‘round and either hits him I the face or shoots him in the chest. I do like it though and I like the idea of Iron Man going into battle with a Super Soaker even more so I may resort to Blu-Tac. His final weapon, the one that’s both functional, practical and cool looking is a melee weapon I’m going to describe a space wizard’s swordspear. It looks a bit like an ostentatious light sabre and I have absolutely no doubt that Mystery Company X has cast it in c-thru plastic and used it for exactly that. Iron Man’s not known for using melee weapons, mostly known for blasting the fuck out of things, which is absolutely why I enjoy it’s inclusion so much, I expect knock-offs like this to obey the following line of thought ‘kids will think it’s cool, it doesn’t matter how utterly incorrect, nonsensical or inappropriate it is to the source material’ and the more it does this the more I’ll like it, and that is why there should be knock-offs of King Kong riding cheap rubber dinosaurs and wielding space wizard swordspears. 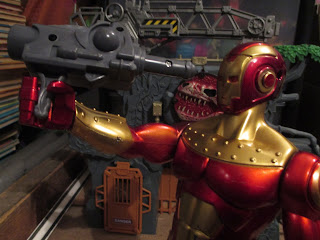 A conclusion for such a rambling, ridiculous review of an Iron Man toy with the serial numbers filed off? If you like this sort of toy, you have no reason not to buy it, it’s currently £2.50 and for that you get a 12” shiny metallic figure with three accessories and an Iron Vagina. If you think knock-off toys are the disgusting you will hate this, should probably burn B&M and possibly me also. Or you could just not buy it and use that £2.50 for a large box of Cheerios or something like that. 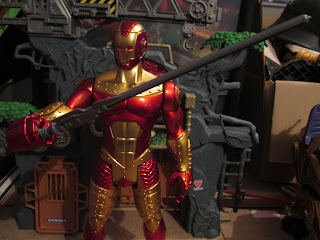