A quick and, perhaps, an odd little post but I needed to put this is on the internet.
Never Never Land used to be a small tourist attraction at Southend-on-Sea; it was built into the Shrubbery, a sloping hillside that’s the other side of the road to the beach. It’s worth noting here that there were in fact two Never Never Lands, the first that operated from the 1950s until 1972 and the second that operated from 1987 until 2000, they were both on the same land and the same sort of attraction but with virtually completely different content - what I’m about to say only pertains to the ’87-’00 version which is the one I went to, the one with castle full of He-Man figures and the creepy always-shocked fibreglass mice everywhere.

Its name makes a little more sense if you know that the pleasure beach at Southend used to be called Peter Pan’s Playground and this park was opposite. A Pleasure beach is what we have in the UK instead of Boardwalks, they’re small and scruffy poorly laid-out semi-theme parks built either next to the sand or on a pier and they mean the world to the hot, sweaty and usually sticky kids of the British Isles – Coney Island but smaller yet with the same amount of dirt. Never Never Land wasn’t a pleasure beach though, the closest thing I can think to compare it to is a road side attraction – there was no rides instead Never Never Land was one big attraction itself, a kind of dark ride in the open, where you walked around looking at the animatronic and/or fibreglass tableaux on display – a pretty standard mix: some fairy tale stuff, some funny animal stuff, some standard fantasy stuff (fairies, wizards, witches, dragons etc). Never Never Land is now almost completely gone, replaced by a park that I never see enough people sit in to alleviate my irritation that it’s now just a park, there’s a few of the old fairy houses in a rockery in the park and the old artificial waterfall, but otherwise it’s all gone.

I’ve wanted to post about Never Never Land since I started this blog – because I really miss Never Never Land. Not because it was good (it wasn’t), not because of nostalgia (though I do have that for it as we shall see) but because the atmosphere there was so fucking weird. It was like there was an invisible barrier you stepped through from the real world into a small pocket dimension where everything was just a little wrong, made all the worse by the fact that you could see the ‘real’ world outside (as we’ll illustrate in a minute). ‘Dreamlike’ is best way to describe it, but not in the whimsical way you might be thinking, you know when you have a dream and everything is wrong but you still act like they’re right? Or when there’s a person in the dream you’ve never met but while dreaming you know you’ve known them for ages? That sort of dreamlike, I miss being able to get that when awake.

The point of all this horseshit is this: 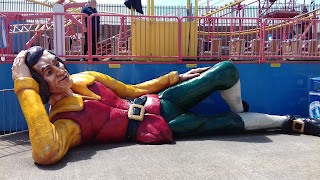 Gulliver is back! This was taken in Adventure Island, the expanded pleasure beach that was once Peter Pan’s Playground, in front of a kiddie coaster called… Kiddi-Koasta. The mascot of the second iteration of Never Never Land used the scary always-shocked mice as their mascot but the most recognisable character they had was easily Gulliver, because he could be seen from the road, here he is in his natural habitat: 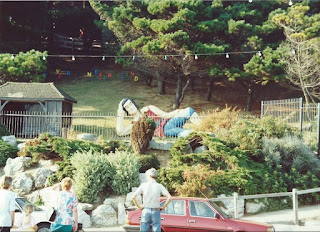 This picture also allows you to get a better idea of the attraction, the person taking the picture is standing with their back to the beach looking over the coastal road, the red car is parked parallel with the curb of the coastal road. Most of Never Never Land is to the photographer’s right (so the way the car is pointing) as is the Three Shells beach café and directly next to that Peter Pan’s Playground and opposite Peter Pan’s the entrance to Never Never Land (at this time the main entrance to Peter Pans’ was the slope that Sands now stands on though it did have an entrance almost opposite Never Never Land’s – Pete Pan’s was built on the sight of the Sunken Gardens, which as the name implies was down a big fucking drop at sand-level). That ratty green fencing was all that kept Never Never Land separate from the rest of Southend so you could see the lowest ‘exhibits’ of Never Never Land from the road (which probably didn’t help attendance now I think on it) but mostly you could see Gulliver - lookit him! You can see him better than the sign for the damn place. To me Gulliver is front and centre in my memories of Never Neverland, when I think of the place I think of, pretty much, this photo. I went to the attraction a lot, long after I was far too old for it but just as often I’d stand and stare into it, like I was looking through a panoramic portal into another dimension where mice are three foot, fibreglass and have clearly seem some things. And when I did that, Gulliver was the thing I saw the clearest, like a ghostly figure on the horizon beckoning me over the hill.

I was under the assumption (taken from either an old newspaper article of an old local) that Never Never Land’s models were all gone, either destroyed like the first Never Never Land’s exhibits or sold to small attractions or the coast or the continent, regardless I’d never see them again. And the one model I was certain was no more was Gulliver – big and heavy, all one piece and having fallen from the forefront of pop culture I figured they’d either cut him up or smashed him up because they needed him out and couldn’t sell him on. I was wrong, he’s still around and for the moment he’s out and on display in Adventure Isle. I initially thought his was inexplicable; did they just have him in storage the whole time? Did someone sell him back to Adventure Island? But while fact-checking this post I found an article for 2006 where the then-owner of Adventure Island was talking about how much he thought Never Never land could still work today and was planning to get the money up to prove it, he didn’t and now it’s a fucking park (councils/holiday camps/theme parks/everyone take note: replacing something with nothing is always additionally annoying, because it feels like you took something away and gave nothing back) but if he thought that then it’s likely he could have stored some of the Never Neverland for later, like Gulliver, does that mean that somewhere there’s a warehouse full of them mice?

I’m sure this isn’t news to anyone who lives in Southend, though the fact that he has a history at all might be, but I only found out on a short trip there on my birthday, happy birthday to me. He’s had a snazzy new coat of paint, which makes him look somewhat like he’s made from marzipan but is faithful to his original colour scheme and you can touch him. This may be isolated to me because my mum never let me touch things (she was right to, I was a cack handed little sod) and you could go in with/touch some of the Never Never Land exhibits but I never got to touch Gulliver before this week (that sounded way wronger than I wanted it too). It was amazing, being able to go up to this thing from my past, touch a memory if you will, he seemed so small, it made me feel both completely like a kid and completely like an adult – fitting for a birthday I suppose.

“We’re both still here!” I thought “two ugly lumpy vaguely human things that should never have survived this long, I’m 31 Gulliver, I’m a 31 year old depressive who wants to die once a day, you’re a 30 year old hunk of fibreglass from a different age when kids were satisfied with 'parks that didn’t have thrill rides, interactive queues and touch screens. We should both be gone but we’re not, isn’t it weird?” I get sentimental and bleak on my birthdays ok?

The reason I wanted to put this here is because I know this isn’t going to last, Adventure Island is always being updated to keep it relevant and because I think the owner has ADHD or something, Before long something flashier, more contemporary or just something going cheap will come along and need to be put somewhere, something that can draw more punters in and sell more wristbands’ll turn up and Gulliver’ll once again go the way of the Golden Hind, the Goblin Dome, the Barracuda, the Waxworks and every other decent attraction that scratches your nostalgia itch that’s been done away with. But for a moment one little bit of Never Never Land is still on the seafront, and keeping up the tradition it feels off, just there in a particularly scruffy part of the park without explanation, a little pocket of whatever dream dimension the old park existed in.
Posted by dwitefry at 12:06