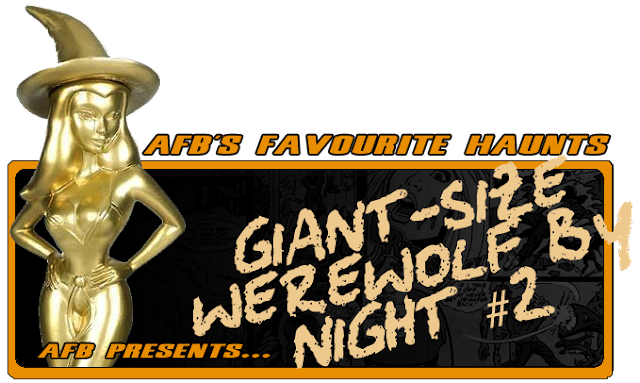 Welcome to what AFB is doing this October, out of a need for Halloween-y blog content I’ve resorted to just talking about things I’m always happy to talk about and have picked some of my favourite horror-themed things from the quagmire or stuff I enjoy. I’m calling them ‘Favourite Haunts’ because I’m witty like that.  We’re starting off small because I can’t be arsed to make gifs today.

The first American comic book I ever owned was Giant-Size Werewolf By Night #21.
“That’s a little odd” you may say if you were real, especially once you’re told that I bought it in 1991-ish and it was published in 1974. I’m going to post the cover; I feel this should clear up any questions: 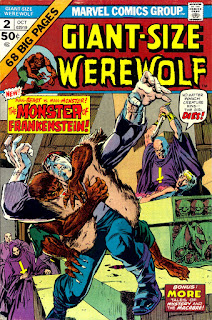 Frankenstein vs the Wolf Man? Fuck yeah! I’m sure a lot of parents would prefer their five year olds never get within 15 feet of a horror movie but as far as my dad, his brother and their father was concerned you are a bad human being if you can’t quote Universal Studios’ Dracula, so they started me off young and I took to these old films instantly, honestly I took anything monster-ish instantly, by 1991-ish I was a confirmed Real Ghostbusters fanatic. Anyway I may have told this tale before but fuck it: my local shops are all built around a roundabout and that roundabout is roughly 11 houses from the house I grew up in, the road it’s on backs onto one of the rows of shops. As a child my mum had dragged me ‘up the top’ one day to do whatever she needed to do, which involved going to the chemist (what is now Boots, it used to be Time Pharmacy back before everything was a chain store). As being in a chemist is crushingly boring for adults let alone children I got permission to hop one or two shops down and visit a charity shop that isn’t there anymore, it was, I think a cat-based charity. In the shop, which always smelt, was a box of various magazines, I’d gone in looking for toys but having seen THAT cover on the top of this little box of periodicals I picked it up, flicked through and asked how much it was, the woman behind the counter gave it to me for free, dismissing it ‘that little thing’, so I have that old lady to thank for decades of being a sad bastard, thanks lady!


So the issue itself, it’s written by Doug ‘I really love Batman’ Moench and drawn by Don Perlin with Vince Coleletta on ink and it’s pretty weird in that delightful 1970s monster comic way. How does it begin? With a piece of cack-handed social commentary as observed by the Frankenstein’s Monster, I’m not kidding:

This is all part of pretty damn effective prologue showing the loneliness of the Frankenstein’s Monster as he shambles from scene to scene never truly being part of any of them, eating live rats and eventually being forced to smash his way out of a box cart, no that doesn’t do the scene justice, he smashes THROUGH a box-cart and falls off a cliff, bouncing on the way.  Meanwhile Lissa Russel, sister of Jack Russel aka Werewolf by Night (yes his name really is Jack Russel), is being stupid. She joined a cult called the Brotherhood of Baal in the hopes that they had the cure for Jack, they don’t so she storms out and tells them, basically, she’s an independent woman who don’t need no cult. Let me repeat that, she JOINED A CULT then BUGGED OUT ON THEM AT THE FIRST MOMENT, a cult, who always take well to members leaving. Unsurprisingly they follow her home and kidnap her leaving a message in blood for the werewolf. 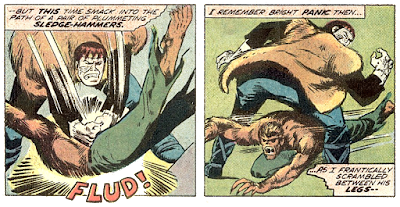 Desperate to get his sister back, Jack Russel chases the cult to Malibu despite it being a full moon and wolfs out before he can get there. Meanwhile the head of the Brotherhood of Baal (dressed in his best pimp suit) does a deal with Frankenstein’s Monster, he does what they want and he gets a new body, a new face, a chance to fit in. Off to the sacrifice! The Brotherhood are going to sacrifice Lissa Russel so they can commune with Satan but accompanied by more floury but ultimately awesome Doug Moench narration the Werewolf by Night crashes the party. 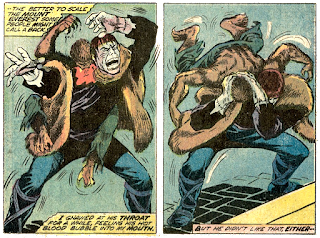 The actual Frankenstein’s Monster vs Werewolf by Night fight is actually upsettingly short, lasting only three pages. Now those pages are bombastic as all get out and again accompanied by more Moench narration – this issue is full of narration; it has more narration than everything Brian Michael Bendis has ever written. So it’s a good fight but a short one, and one that ends with a decisive victory for Franky, and it’s not even his book! Damn. 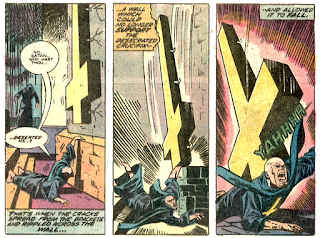 When the Werewolf comes too HE’S going to be sacrificed and the Brotherhood of Baal reveal their purpose, they’re going to put Satan in Frankenstein’s body. They assumed that Franky was too dumb to understand this but The Monster wasn’t and figuring out what’s going on, and how this will kill him or send his soul to hell or both he gets annoyed and wrecks the Brotherhood’s shit, ultimately crushing it’s leader with a giant cross and releasing the Werewolf for a quick and well-narrated team-up as the building burns around them. In a nice moment Lissa makes up for her earlier cult-based stupidity by freeing herself and escaping and in another nice moment most of the building falls off of a cliff while on fire into the sea - fuck me. Lissa declares them dead to the photographer I forgot to mention to earlier who Jack Russel got the information about the Brotherhood of Baal’s location from but we’re left with two sets of monstrous footprints in the sand so us readers get to know that the titular character isn’t really dead and can all sleep soundly. 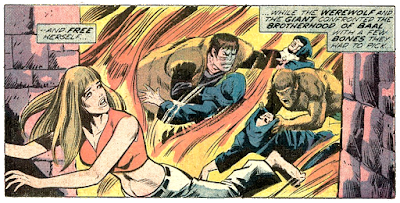 So yes, obviously I have a lot of nostalgia for this issue but even with that taken out it’s not that bad, it’s very much of a style but a style that I enjoy, the narration is at times dramatic and not always necessary but always fitting with the subject matter – two tragic monsters. The opening scene is works great once the two out-of-work social commentators fuck off and after Lissa has been idiotic the rest of the story is goes off without a hitch but with some pretty neat moments. It’s not a masterpiece but it is a nice 70’s Marvel comic book. Was it a good introduction to Marvel Comics and American comics in general, well no it didn’t work in 1991 but then I was five and didn’t know there was a wider world to be had, I just wanted to read about monsters beating each other up, it wouldn’t be until the following year or so with the debut of X-Men and Batman: The Animated Series that found there was two whole universes of superheroes out there and they were all connected by in-universe and behind-the-scenes events2.