Examples of Crap I Waste My Money On: Bootsale Report 21!

Would you like some advice, my non-existent readers? If you go out - let’s just say you went to a Foo Fighters gig at London Stadium - on a Saturday night you cannot, no matter how hard you think you are, no matter how good you still feel when you get in, go bootsailing (or yardsailing or whatever) at half six on the Sunday morning. And if you do ignore this and decide you can do it – don’t get in until gone 1am because it took over an hour to get out of West Ham football ground and decide ‘fuck it, I’ll just stay up’. Not that I’d ever do something as stupid as this, this is a purely hypothetical argument (oh and they covered Under My Wheels AND Under Pressure. performed ‘Jump’ by Van Halen to the tune of Imagine then went straight into Monkey Wrench - it was epic). 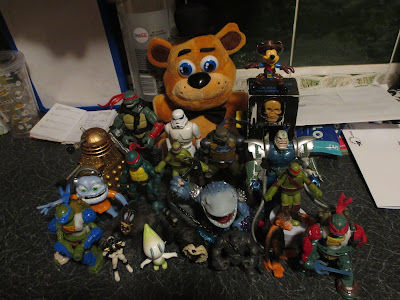 So now I’m going to try and talk about something when I have almost no memory of that thing, some of the things I say may – MAY – have been made up. Background is being provided by a neat hardback book celebrating 200 years of Frankenstein, it cost me a pound.
So are you sitting comfortably? Because I’ve had 20 hours sleep… 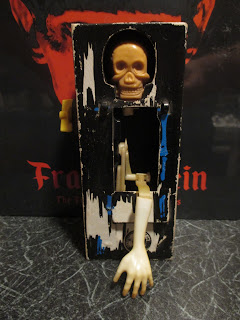 Skeleton Money Bank!
So having slept for 20 hours I got the bag of stuff I bought into the kitchen– it was a Tesco’s Bag for Life because I’m a suave bastard – started unpacking it, found this and actually said aloud ‘ah man, I fucking love these things!’. Yeah I have no recollection of buying this, if you’ve never seen one in operation I pity you, but I’ll explain – these things are battery operated: you put a coin on the bottom on a circle, which is actually a little switch, the weight of the coin makes switch switch and the skeleton’s hand come out and drag the coin into ‘the grave’. It’s end-of-the-pier-haunted-house level shit but then I adore end-of-the-pier-haunted-house level shit (my terrible wording is actually more accurate than it sounds, these were/are usually sold at the seaside as novelty gifts). This is particularly ratty example of one, there’s a flap missing and the skeleton’s face has been sunlight buggered to the point it’s the colour of Caramac and had I been more alert at the time I probably would have passed on it but it’s ok, it’s not like this is the only one of these I have.
Yep. 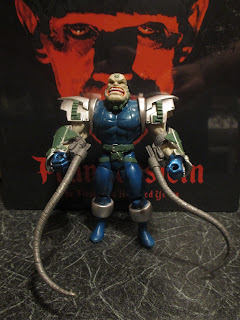 Omega!
There are sometimes woodland sprites that visit bootsales and hand out Toy Biz figures to sellers, they tell them to say ‘they’re collectible’ and ask more for them if an adult wants to buy it because that’s proof they must be worth money and they’re only going to go and sell it online later anyway. They never give anything good like the Monster Armour series or the Monster Mutants or stuff from 1991 or 1992, they only ever give out nobodies like Comcast, Killspree, Kylun or Omega here, they keep all the Rogue and Psylocke figures for their own private use. Omega is the Age of Apocalypse version of the X-Men villain Omega Red, the Age of Apocalypse was a sweet comic book event where all the X-Men books were suspended and temporarily replaced with different titles set in another reality. Omega was in literally four pages of an issue of X-Man solely so Domino’s little group had someone to squash to make them look badasser, I have no clue why Toy Biz decided to make him when there were all kinds of Age of Apocalypse characters sitting around waiting for a figure - including X-Man himself! My only theory is it was because Omega Red had some notoriety thanks to appearing in the cartoon and Capcom’s fighting games but tentacles aside Omega doesn’t really look anything like Omega Red, hell he’s not even actually red, if they wanted an ‘Omega Red, but not’, why not make Epsilon Red? He looks like, and his name even sounds like, a typical toy variant.
I said ‘Omega Red’ a lot in that paragraph, stupid character not having any commonly used nicknames (his real name’s Arkady Rossovich by the way, and no I didn’t have to look that up).
Anyway I actually like these ‘god knows why they made them’ figures from lines like this or Star Wars, characters that only got made because of the time the toyline was coming out or because they needed another figure to fill out a wave or whatever so I have no issues with having found Omega in my Bag for Life. 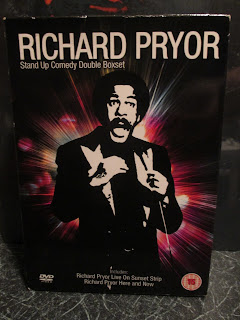 Richard Fucking Pryor!
There are roughly three American comedians who I like enough to buy DVDs of, the bloke from Car Wash is one of them.
These are two of Pryor’s later videos, and one of them is his ‘infamous’ show following his trip to Africa, after he gave up spamming the N-word and after he set himself on fire. “But isn’t that when he stopped being funny?” well, yes, there does seem to be a commonly held opinion that the minute Richard Pryor stopped overusing a racial slut is when Richard Pryor started to go downhill, as if without this added shock value he was never all that funny.
The people who hold this opinion have never clearly never seem him stand on stage and perform a segment of his show making fun of what it’s like to set yourself on fire while freebasing cocaine. ‘Pryor of Fire’ is as funny as anything else the man ever said, including ‘Killing My Car’ and the story of how he had a pet monkey that used to fuck people in the earhole. Oooh speaking of monkeys: 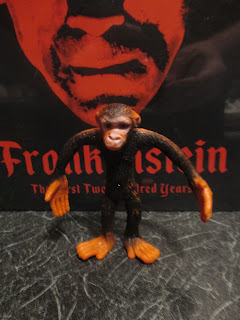 Sid!
A kindly seller stopped me as I was plodding ‘round the bootsale like the most stereotypical zombie you can imagine (Left 4 Dead this was not) and said “you look like the sort of person who appreciates old bendy toys” “I am” I said “do you have any of Gumby?” “I have no idea who that is” she replied “but as you also look like someone who totally deserves to be rewarded for being such a DAMNED awesome person, let me show you this bendy chimp” so I bought the bendy chimp and named him ‘Sid’ because he totally looks like a Sid doesn’t he? I don’t think he’s as old as he looks, I think he’s just one of those new toys that look like old toys, I don’t care though because he’s just so bloody lovable! Look at his little face! (If you can, my camera clearly thought that Sid’s feet were what needed to be in focus and only his feet).
I’m going to assume Sid doesn’t fuck you in your earhole, but I haven’t had him long enough to tell and for most of that time I was asleep, so it’s entirely possible he does (also yes, I’m fully aware he’s an ape but shut up). Ooh, speaking of apes: 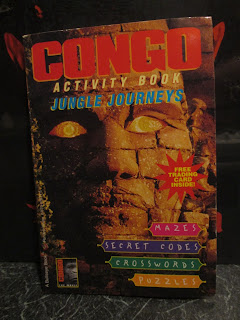 Congo Activity Book!
This…this exists? That was my thoughts on the matter then, it’s my thoughts on the matter now and is exactly why I’m posting a picture of it online.
It’s a typical puzzle book – crosswords, mazes, spot the difference, all that – but themed to Congo, fucking Congo! And it’s really themed to Congo, whoever made this actually sat down and watched the movie (which is more than most of the world did) and then got the artist to actually draw Amy rather than some random gorilla, there’s even a puzzle based around sign language…what? Oh, sign language is a big thing in the film, it’s ok that you didn’t know, nobody saw Congo and many that did hated it (which is why this book is so odd, funnily enough). I mean there was an effort to market Congo to kids, presumably because of how successful that had been when it came to Jurassic Park (Michael Crichton wrote the novels both were based on), with Kenner raking in loadsa money with their JP toyline and such - that success was not replicated, Kenner did not make loadsa money with Congo, even though their line was like 50% awesome ape figures. But I’m one of the few people who actually likes Congo: the book, the movie, the video game, the toys, and yes apparently even the activity book.
And yeah the free trading card is still inside, even barely conscious I wouldn’t have bought if this wasn’t the case; I’m not stupid, I just like rubbish films sometimes (you should see the amount of Space Jam crap I have!). 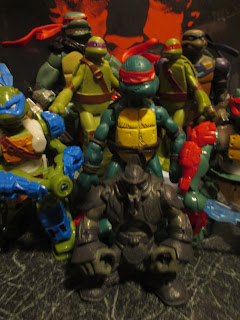 Turtles, Turtles Everywhere!
I really cannot stress how out of it I was at this bootsale, I’m sure I missed dozens of things I would have normally picked up on (like basic English) but it seems that no matter how fucked I am - I can always spot Teenage Mutant Ninja Turtles. No-one who even remotely knows me would be surprised about this.
The two Robo-Turtles at the front are from a sort of Rock ‘Em Sock ‘Em Robots/Beyblade/Crossfire/TMNT mash-up game that was put out during the just-now-over Nicktoon era, and it’s one of the few things I do remember buying. The woman was actually selling the whole thing, plastic playfield, counters and all but I only really wanted it for the exclusive figures, which strike me as being one of those things that’ll be a bitch to get hold of in years to come (like those TMNT hockey game figures are now) and because they’re sweet robo-turtles. So I wasn’t inclined to give over a fiver or something for the set, turned out she only wanted 50p for the lot. I contained my excitement, mostly because I didn’t have energy left to blink let along jump up and down and squee, but anyway - thanks, lady!
I swear Robo-Leonardo had his sword when I bought him though, I mean I was tired enough to hallucinate lightsabres but I’m sure it was still attached, must have broken off somehow, maybe as I was putting it in the bag? Sounds plausible, I couldn’t get my thumbs to be opposable at some points so bashing a Turtle as I put him in a Bag for Life is completely likely.
Also, while I’m here – that Donatello has an articulated waist. THIS IS MY NUMBER ONE PET PEEVE WITH TMNT MERCH. Yes it gives the figure an extra articulation point and people are obsessed with articulation points and convinced that more articulation = better but turtles cannot bend that way! That’s not how they work! I’ll accept the Storage Shells as some kind of magic or mutation but I will not accept turtles being able to bend mid-way down their fucking shell, I AM NOT CRAZY! 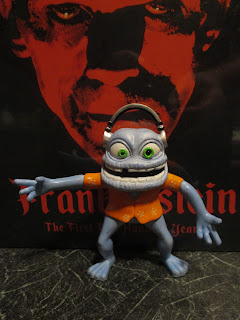 The Annoying Thing!
As I was leaving, shambling along and wondering what month of the day it was, a very authoritative looking chap came up to me with a bag and explained that for my sins over the past few weeks, including organizing a barbeque and then getting someone else to cook everything (thanks, you two!), I had to spend money on something because ‘lol, irony’ or else he would snap the plunger off of the only complete Dalek I’ve ever seen at a bootsale ever, and I’d go to hell. It was a choice between Crazy Frog or Mr Blobby but there was no contest – I’ve already got a bendy Mr Blobby.

Thank you for reading me ramble about a time I was tired and bought crap, we can only wait for this to go viral.
Posted by dwitefry at 15:18

Email ThisBlogThis!Share to TwitterShare to FacebookShare to Pinterest
Labels: Bootsale Report, Examples of Crap I Waste My Money On, TMNT, Toys, X-Men