I’m pretty sure I’ve been buying from NeMa Studios since they started, I’ve certainly been buying from them since they did their first convention in London. They sell online-exclusive items from abroad in the UK (and at a stall) which is very handy and also comes with the added pleasure of not dealing with overcharging bastards like Super7 personally. I can rationalise buying stuff from a distributor like these guys much easier than I can buying from Super7 direct, after all they’ve already bought their stock - and the bloke who runs it is lovely. So I was well up for anything they might make when they switched from distribution alone to distribution and production but it turns out the thing they made was seemingly tailored just to please me, meet Dethlatron: 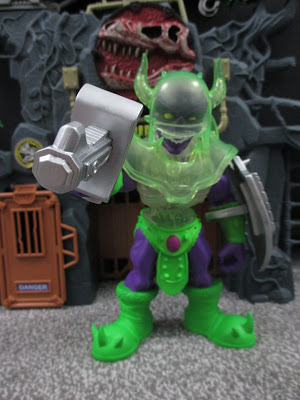 Dethlatron is the first in a series NeMa are calling Novatron but anybody with any taste will recognise him as Dethlor from Speclatron, a 1980s He-Man knock-off toyline by S&T Sales that have gained a cult following thanks to being both awesome and glittery and Dethlor has gained the biggest cult following of the lot. I mean OF COURSE you all know your 1980s bootleg toys right? I don’t know why he isn’t called Dethlor as even if Speclatron haven’t fallen into the public domain I highly doubt anyone is left around to know, care or have the ability to take NeMa to court over it. I asked at a con and was told it was because they didn’t want to limit themselves to just Speclatron and as the next few figures are being taken from Flexatron (Speclatron’s sister line) and Monster Castle (which is by a completely different company) I can buy that for calling the line Novatron (which is an awesome name) but it still doesn’t explain why Dethlatron himself isn’t using his real name – extra arse covering maybe? Securing a trademark? Because Dethlatron sounds like an awesome synth band? It’s a lot easier to fucking typo than Dethlor I know that. 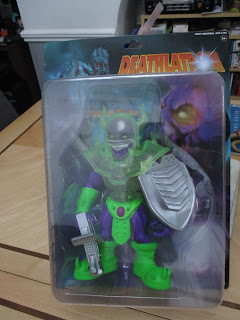 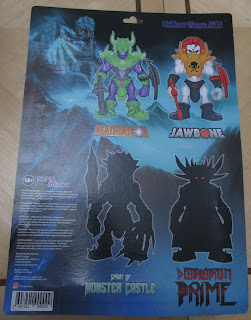 I don’t normally do packaging but I thought I would here because it’s a) just so pretty: they’ve really captured the feel of 1980s card art, especially the ones these knock-off lines came on (check out Galaxy Adventure Girl for instance) even though it’s digitally painted. 2)  it shows off the next three figures and that’s just really enticing: the next figure is Herr Bone from Flexatron and looks very nice indeed but the following two are very interesting and not at all what I was told was coming last time I was at the NeMa stall. Then I was told the next three figures would be Deemin, Veenum (Speclatron) and Sun Man but these seem to have been replaced by Herr Bone and two original characters? I suppose Dethaltron Prime could be Deemin but it honestly looks more like we’re gonna get either a repaint or deluxe version of Dethaltron which his nowhere near as cool as Sun Man or Veenum - but the Spirit of Monster Castle looks like it could well be. Going by the silhouette it looks to be a human personification of Monster Castle, a Castle Grayskullman for it if you will and if that’s true that’s some fucking hot shit. Speaking of which d) the card art has awesome fan art of Monster Castle on it! if you’ve not seen or heard of Eberlein & Co’s Monster Castle then GOD, but here: 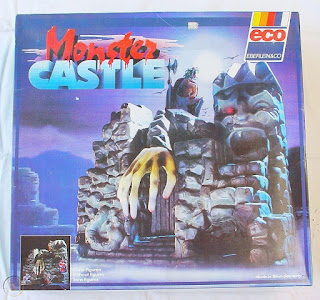 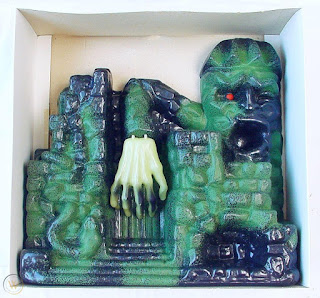 It’s a cheap, vacuformed knock-off of Castle Grayskull but it’s just so undeniably charming and with that huge spectral hand and tortured face really rather awesome and NeMa if you want to make one these? I’ll buy it – it doesn’t matter that it would probably cost about £200 in 8inch scale because it’ll still be cheaper than the grand (including postage) the last one of these I saw up online sold for. and as I pre-ordered Dethlatron I got this lovely print: 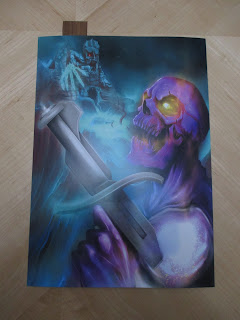 Which is the awesome card art with the awesome Monster Castle picture! And doubly nice as my card got a bit banged up in the post, nothing too bad but not really scan-worth, but this means picture I don’t have to care about that, instead I can just enjoy a completely text and bubble-free version of it. Yes I AM putting this on my wall. 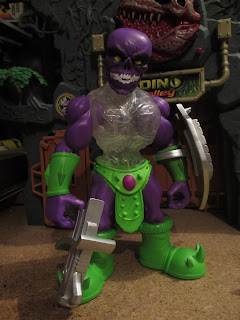 Anyway, figure. Dethaltron is big (8 inches) and extremely stylised but I don’t think any worse off for that – the sculptor’s have done a good job translating this early-2000s indie comic art style into physical form and Novastars Novatron having its own distinct art style is no bad thing. They’ve also added detail all over the figure, he now has a nice 200X Skeletor style loin-cloth piece, fur under his gauntlets (or it’s just really bad paint apps, but I think it’s supposed to be fur) and those, fucking, boots. I’m sorry I can’t get behind these boots, I own Lordi albums and I can’t quite get behind ‘em, it’s the toe-spikes, they’re just so…ridiculous. I look at them and all I see is that Sonic the Hedgehog beanie hat and you cannot be a badass when you have a Sonic hat on your toesies. They’re also not at all like the Galaxy Warrior boots that Speclatron originally used but really just Masters of the Universe boots wearing a Sonic beanie. I can’t decide if that’s an issue or not – on the one hand I’m quite partial to the caveman style shoes Galaxy Warriors et all use but on the other hand I respect that they may have come out looking like neon green socks on a figure this otherwise detailed and bombastic – and they got the gauntlets right. It seems like each figure is going to have unique boots (Jawbone has some New Rock looking motherfuckers which…wait, Flexatron had boots like the ones Dethaltron has! And Speclatron had boots like the ones Jawbone has! I…just…fucking…MOVING ON 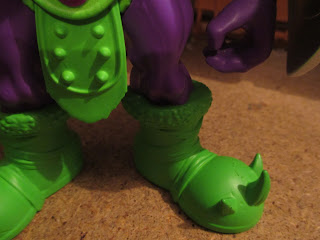 Articulation wise our Dethaltron is pants. I thought for sure he’d have boot swivels and it looks like he was going to, look how weirdly his leg sits in the boot? No one would sculpt that naturally that way, it seems some artic. was cut for cost methinks and it ends up with a figure with no articulation below the tits. We have swivels at the shoulders and a ball joint at the head – I think. It’s not an issue functionally as he stands up just great, anyone with dirty great plates that size will but it leaves him more an art toy than a collector’s figure is all and people should be warned about this and… oi! They also didn’t replicate the cracks in the top of Dethlor’s skull and I find that a very, very weird design choice – they’re just so prominent on the original figure. Actually you know what? With the highly stylised look, the extra details, the changes in little details from the original figure, the slightly over-the-top look of the whole thing and extra amour, Novatron feel like the 200X versions of old knock-offs. I suddenly like this figure a lot more (and I already liked it quite a bit). ‘200X’ being the early 2000s He-Man cartoon, the anime-looking one you probably hated (but I love) btw. 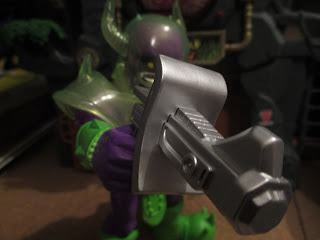 Accessory wise our Dethlatron is fucking tooled up. He comes with everything the original figure did plus a helmet and new chest amour, both designed by NeMa. Which is great, Speclatron are just about the only He-Man knock-off line to not come with chest amour (to show off their action feature, which pumped the glitter and saline that filled their chests) so it’s great that NeMa filled this little hole in. Honestly it doesn’t sit that well on the figure (it’s a little loose) but it does look really cool and feels suitably Dethlor if you get my drift, as does the helmet (which sits perfectly fine). The gun is lovely, a great re-creation of the Speclatron gun but in the chunkier style of Novatron and might actually be my favourite thing about the figure. Again, it doesn’t sit quite perfectly, if you line it up with the fingers if becomes loose but it’s not really noticeable, in fact neither is the armour’s sitting issues (piles?) but I have to bring it up. The shield baffles me – it’s very nice and it’s made of this slightly soft plastic that means that the clip can not only fit anywhere up Dethlatron’s arm but never feels like it’s going to snap - Mattel, Super7 and Hasbro could all learn from this material choice please, thank you. But design wise? It’s based on one of the three shields that Speclatron used, which were stickerless versions of the shields from Galaxy Warriors and Galaxy Fighters, this isn’t the one that Dethlor was actually packaged with but that’s ok because he wasn’t actually packaged with the gun either (they came in the Super Speclatron box sets of which I’ve never seen any proof that Dethlor was a part of) and I agree that this particular shield is just a better pair with that gun. What’s odd is that they’ve added this…prefect badge to the shield as extra detailing, it looks really stuck-on, is at a weird place on the shield (it’s just not centred is it?) and begs the question: if they wanted to add sculpted-on detail to the shield, why not just sculpt on the tiger sticker that the shield was missing? I don’t hate it but like the lack of skull cracks it’s just an odd design choice to me. 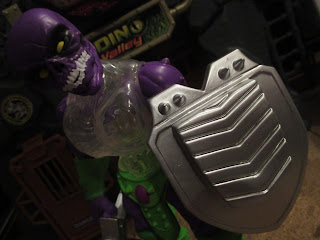 But I do like this ugly bugger. From a reviewer standpoint he’s terribly flawed, his armour and gun sit badly, he needs more articulation, he really could do with some additional paint applications on the green - some metallic accents or something – and so on and so on. But from a me standpoint he’s just so damn cool. He’s a big, chunky, funky, spiky figure of Dethlor and flawed though he is Dethlatron looks great from even a slight distance and great ‘on the shelf’ (a saying I hate). I can happily see myself having a sideboard with a line of Novatron figures on it (maybe not Dethlatron Prime) and it just making my house that little bit better and a lot more Metal and for £50 he’s still a pretty good deal for a low run art toy with a high accessory count. Actually I’m probably going to display him without his new armour - because I’m scared of change and because even though it’s sensibly see-thru it does distract from the glittery chest, arguably the most important part of the figure and a part they actually nailed if you ask me. They managed to resist over-glittering him which I’m thankful for personally as it leaves the figure looking more like a warrior with a mystical force and less like a snow globe and it’s not super shiny. In some lights you can barely see it but then it catches the light just right and leaves him looking like he’s twinkling with power and not a figure with glitter moulded into his chest piece – very good. 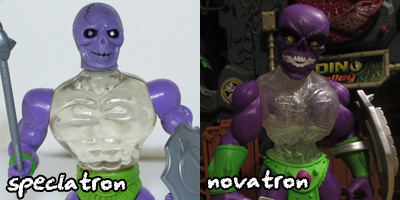 Do I have any backseat-figure-making advice? Meh it’d just repeating what I’ve already said but I’ll do it because I don’t have a good concluding paragraph: add in some more articulation, change the shield up, add some paint accents and maybe some shading? I respect that shading is not only an extra cost but a tricky business (my new Kittrina figure from Masters of the Universe Classics for instance looks like she’s spilt something down her front) especially with neon so I can understand it not being there and personally I don’t think it hurts anything too much, but it might be something to look into. Also no more Sonic head shoes, please. Also Anubi, just sayin’ – you could reuse the parts for Tiger Man too.