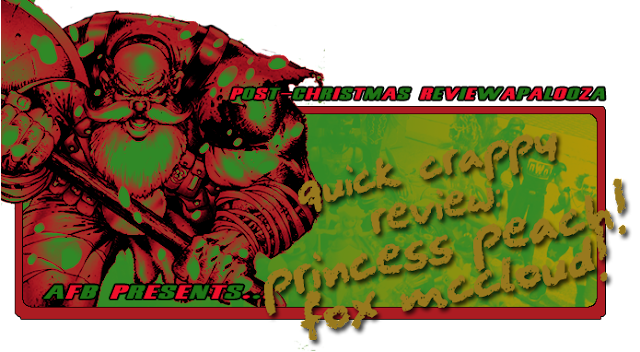 Having received Tanooki Mario and a Shy Guy for Christmas I decided that I should like at least a Princess Peach and Bowser to go with them and if I saw one I’d pick up a Donkey Kong and Fox McCloud too. This is my way of thinking to mask the truth when the truth is ‘I’m now buying into this line’ but don’t want to admit I’m weak. The novelty of having these characters in shops has also really set in, you must remember that when these characters were making their names in games like Super Mario Bros, A Legend of Zelda, Metroid and Starwing there was no toylines for them, for years the best Super Mario figures in the west were the set that came from McDonalds. I personally think this is a mix of toy companies’ general dislike of the Nintendo (and later Sega) for taking part of their market away and thus lack of desire to pay for their licenses and the lack of interest in action figures and thereabouts in Japan where the few companies that did have Nintendo and Sega licences (like Tomy) were from, but in depth and baseless theories aside being able to see a Starfox or Zelda figure hanging in a toy shop is rather thrilling. 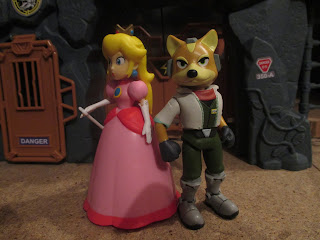 Anyway I manged to fill half of my ‘top four wants’ within a week of Christmas on a morning out in Exeter the day after the day after Boxing Day during my trip to Devon (Which I make every year because half my family pissed off down there, no I’m not over it). Exeter still has a Toymaster, do you remember them? With the dog in the pyjamas? These two figures were the only things I bought in there (their Monster High second was rubbish) but I loved the experience of being in one all the same, they even have carpet down, what shops still have carpet? Brilliant. 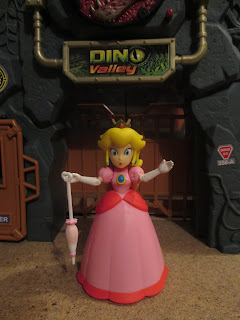 Anyway Princess Peach, Princess Peach wasn’t Mario’s first damsel in distress (that was Pauline) but has fulfilled the role most often. She debuted in Super Mario Bros back on the NES and was first playable in the western game that used the name Super Mario Bros. 21 and finally got her own game with Super Princess Peach on the Nintendo DS. Until the release of Yoshi’s Safari she was known as Princess Toadstool over here but all the localisations (like Bowser being King Koopa) were done away with in Super Mario 64 and now she no longer uses a name with ‘stool’ in it. She’s the ruler of the Mushroom Kingdom and I THINK her father is still alive, hence why she’s still only a princess but Mario continuity is…vague. 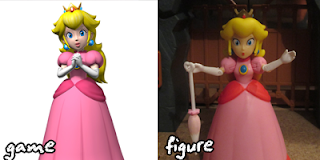 Honestly I will probably replace this with a Figuarts version when one is made, Princess Peach is my go-to character on Mario games where she’s available to play - it started out just because I liked the precision her gliding ability in Super Mario Bros 2 USA afforded me but then just became a thing - and this really isn’t the best Princess Peach could look in figure form but I’ve never had an action figure of Peach before and the thought of having her in scale with Tanooki Mario was too good. So what’s wrong with her? Well sculpt-wise not very much, she looks like Peach, her hair and dress are pretty much perfect with the exception of her puffy sleeves which have a bit of a lumpy and ‘clay’ looking surface and they’ve even gone to the trouble of giving her uniquely tooled legs. Mainly the problem is she looks like someone’s just shoved a Starman up her, that VERY surprised look is all the crappy paint apps fault as she has a smile sculpted on her, they’ve just been a bit cack-handed with the lipstick and made her look like she’s been flashed by a Shy Guy. I also don’t like her dress, here I took a shot up it, it’s quite rude but as she already looks like someone’s taking a photo up her dress I didn’t feel too bad: 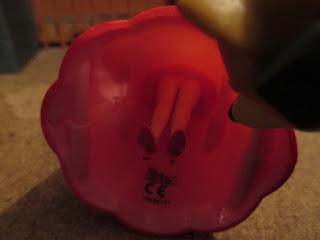 I appreciate the legs (and painted in panties, this was designed by a man wasn’t it?) what I appreciate less is the complete lack of articulation and the two smudges of red that make her look like she has cellulite. As for the dress it’s hard plastic and held together with big plastic plugs, nothing else on her is hard plastic (in fact her hair is soft rubber for virtually no reason, the very design of her hair hampers her neck articulation to a point that no amount of rubberyness will improve things, maybe it was a health and safety thing, her hair is petty pointy) and surely the one thing out of all of her that should be softer plastic her dress? I’m going to assume it was done to guarantee she’d stand up but I’m sure this could has been achieved as easily with the same plastic everything else in the line’s made from. Weird.

Overall though she’s passable, she’s accurate, in scale and doesn’t feel too delicate (though she’s naturally the least robust of the four figures I’ve got so far, just thanks to her thinner arms) and I’m sure the nitpicks bothering me is just because I’m very attached to the character, or I’m just in a shitty mood. Anyway her mystery accessory is her umbrella, it’s the one she’s usually seen with/wielding so I doubt the team thought anyone would be disappointed but they should know better! I just really wish it was Perry from Super Princess Peach is all (this makes me a very, very small minority), I also would have liked it to have come with an open option – as it has to be assembled (slots together easily) including an open and closed option would have made sense, it was probably a cost thing, or because it wouldn’t’ fit in the box and would ruin the stupid bloody mystery accessory concept. Anyway unlike all the other figures for this line I’ve got so far she can actually hold her accessory, not because she’s been given a hand that can do it, but because you can hook it over her hand/wrist – it’s appreciated. 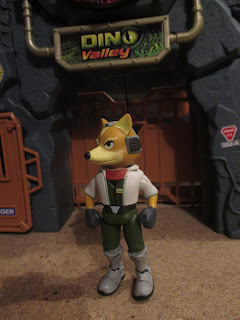 Then there’s Fox McCloud, Fox is the main character from the Star Fox series, which is very popular with Gamers and Nintendo fans but not quite the household name Mario, Zelda and Donkey Kong are. He debuted in Star Fox (Starwing here in the UK) for the Super Nintendo or Snes but this figure is based on his appearance in Star Fox 64 3D and thank fuck for that. You see Starfox got a rather ugly, snubby nosed and stylised look for the game Star Fox Command and this look is the basis for his design in most games except 64 3D (a re-release of Star Fox 64). Had it been that look (or the revised Smash Bros 4/Star Fox Zero look based on it) that JAKKS had chosen to use I wouldn’t have bought a figure; but a happy bit of timing has this figure seemingly being developed when Nintendo’s style guides were still for promoting 64 DS and I got the figure I wanted. See I’m not really big on Star Fox, I enjoyed the original, 64 and Adventures but I’m hardly a fan, no mostly my affection for Fox comes from the awesome puppets used in the adverts for Starwing, I used to see them in the Marvel & DC comics of the time they just fascinated my seven year old ass (like most puppets and animatronic animals always did/do, I think it’s related to my fear of mannequins) and looked so badass, obviously I’m not going to get a figure of that in World of Nintendo but getting the 64 3D look is easily the next best thing and that leaves me warm and satisfied. 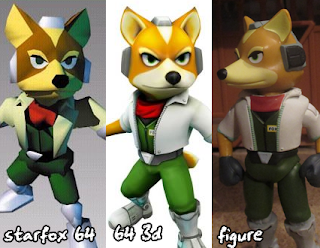 This warm feeling of satisfaction runs through the whole figure, well except the hands, his sculpt is satisfactory, his articulation is satisfactory, his poseability is way more than satisfactory, even his paint apps are satisfactory – especially when you compare how complicated they are to Tanooki Mario, they’re not perfect, in fact nothing about the figure is really, but they’re of a completely satisfying level of quality, I look at the figure and am completely satisfied, with the money I paid for it and the final product. Except for the hands; Fox has no wrist articulation again but he also has fists, now with Mario I’m ok with fists because the man has his hands in fists for most of his time on-screen but Fox has a habit of holding things – Arwing controls, blasters, big hitty sticks, Krystal’s buttocks, he’s usually using his hands for something being a fucking pilot an’ all. I think the fists thing is just because he has his hands on his hips/arms folded a fair amount official artwork but all the same, a pilot who can’t hold anything is a bit daft. 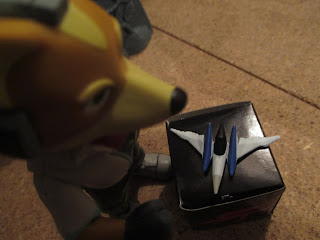 His ‘mystery accessory’ meanwhile is tied into this hand-issue and is… a tiny Arwing. I’m happy to have this, who wouldn’t want a tiny Arwing? It’s an iconic video game vehicle and a cool little ship for something that was made of polygons on a video game system that wasn’t meant to display polygons  but wouldn’t, oh, I dunno a blaster have been better? Or his hitting stick from Adventures? Y’know an accessory he could actually use? Of course that would have meant putting a hole in his hand and I think the team at JAKKS are scared of doing that in case the Palm Monster comes and eats their livers. On the other side though, not having an accessory he needs to hold completely negates the issue of him having closed fists so in the end the figure ends up being better than the sum of its weird choices and the feeling of satisfaction somehow prevails throughout. Also I’m told they’re doing away with the Mystery Accessory element for the next wave, which worried me – what will I bitch about when they do that?

All-in-all then I’m either a contradiction or a hypocrite or it’s something a bit cleverer and I’m too tired/thick to work it out – because one figure is flawed and that’s unacceptable and one figure is fine despite its flaws, either way I’ve got a fine Starfox figure and a Peach that will do just fine.