Cos it’s better down where it’s wetter, take it from me. 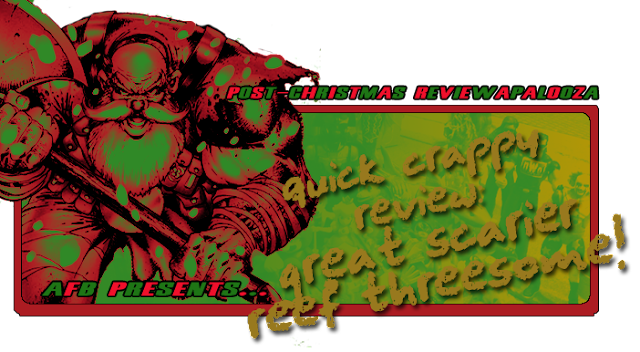 I was sure that Great Scarier Reef wasn’t dropping until 2016 so was pleasantly surprised to see both the Down Under Ghouls and Glowsome Ghoulfish assortments on shelves, and then off shelves, very fast. These fuckers sold out, it’s the first time I’ve seen Monster High shelves with that ‘ransacked’ look since 13 Wishes, but for the few weeks they were on sale before Christmas every shop I saw them in I in fact didn’t see them in, what I saw was holes with one or two dolls laying diagonally at the back. I suppose it was just a combination of mermaids, being released right before Christmas and having three (four! – Peri) new characters that turned these things into Turboman for few a weeks but it was also a definite pleasant surprise. 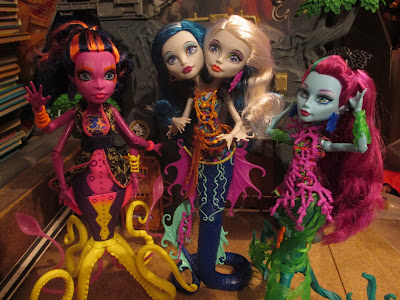 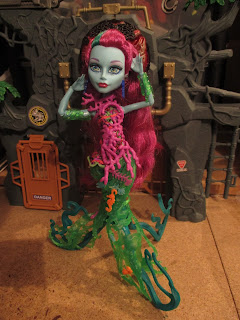 Posea Reef was the one of the three (four! – Peri AND Pearl) I was the least interested in, in fact I was in two minds about buying her at all, and true to form I’ve ended up liking her quite a lot. She’s the daughter of Poseidon and a gardening nerd, this doesn’t seem to have any effect on her social status though, or perhaps being the daughter of a living god means you can waffle on like Charlie Dimmock and still play with the cool kids. Design wise she’s a little odd, she doesn’t so much have a tail but rather dissolves into a whirlpool of green water, sealife and seaweed while most of her dress is covered up by this ridiculous coral…fuck knows what it’s supposed to be, armour? I think it’s one of those things that looked great when drawn (and it does look totally sensible in her official artwork) but when translated into 3D it sucks and no one would say so, I’m tempted to take it off and just leave her in the nice, if not slightly 80’s, top underneath but my rigidly enforced need to have all my Monster High dolls be complete and official artwork accurate forbids it. Her strange lower half also makes her a complete short arse, which doesn’t really seem to go with her elegant face and long-flowing hair but does make her endearing, at least to me, as a short person with some very vertically challenged friends I’m easily swayed to the side of shorties. 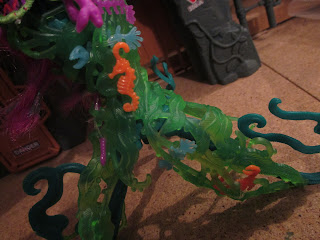 Her face sculpt is absolutely gorgeous but the real sculpting work is down at the other end, which is also where all the design effort went too I think (it didn’t go to the coral armour that’s for sure). She’s made up of an elongated hip section with three ‘tentacles’ of what I think is either swirling water or seaweed, this is all in a dark garden furniture green, each tendril has a ball join (mine are very stiff) allowing them to be spread out to act as a stand or be flattened to allow for bathtime fun. She then has an overlay of soft transparent green plastic which is carved into the shape of sea plants and water that swirls all the way up to her waist and splits off into overlays for two of her tendrils at the bottom, this hindered articulation for me a little at first but you can unhook and rehook them to the parts of the tentacles as you require and the amount of holes and the overall design of the overlay means you can get them to look right with the tendrils pretty much however you want. Then in the swirling overlay are hung/perched little critters including a seahorse, crab and cartoon fish skeleton. This girl is the fucking Tree of Life of mermaid toys. So much effort must have gone into this and even if it’s only saddos like me, whoever worked on this doll’s undercarriage needs to know that at least some people appreciate their work. 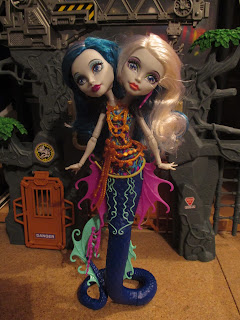 Posea has no accessories beyond her diary, but she has long hair and looks the most like a traditional mermaid in the box so she was sold out virtually everywhere, the only reason I got her and Kala (who was sold out everywhere, no virtually about it) at all was because Toys ‘R’ Us had just put out their first post-Christmas delivery. Peri & Pearl Serpentine though seem to be the worst sellers of the whole sub-line, no matter which store I went in, the few stray Scarier Reef dolls scattered about the empty shelves were guaranteed to be the Hissters. I initially thought it was odd as the two seemed to get a near unanimously positive response online, then I remembered that these dolls are actually aimed at people who aren’t toy collectors, small female people, and it seems that with a two headed doll Monster High has finally found the limit of what little girls will tolerate when it comes to horror, oh well, back to cat girls. Anyway Peri & Pearl are the daughters of The Hydra and share a body, Peri is the one with blue hair and Pearl the one with white hair, Peri is laid back and forgiving while Pearl is hot-headed and dismissive, other than hanging out with Kala all the time and wanting to be jewellers that’s about all I know. 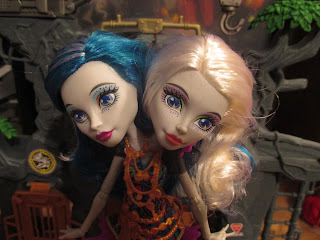 I am not the biggest fan of jewellery, and so girls who are dripping in it, especially gold, are a massive turn off for me, guess what Peri & Pearl’s hobby is? They seem to be based on this recent indie/hipster fashion thing of girls wearing loads of old or retro-style gold and bronze jewellery (like Clara from Doctor Who) which I think is absolutely fucking gross. Yeah that one thing has completely turned me off them. Moving on from my insanity though the two look damn good, the designer’s eschewed the typical mermaid tail for a more snake-like affair reminiscent of their daddy and is far simpler to use as a stand than Posea’s three prongs of seaweed water, though it does make it a lot easier for the two to overbalance. Inverting their hair from one another was also a nice little design choice I thought, a simple yet very effective way of giving us a visual cue that while they may be twins they’re very unique and different people (is the hair colour natural? Would that make them non-identical twins?) the same goes for giving them different shades of make-up, which manages to fool you into thinking that they don’t’ have the exact same head (they do), speaking of which – aren’t they cute? I think I find Peri the more attractive of the two just because I like darker hair but whoever did this really got the ‘cute twins’ thing down, such adorable little noses! 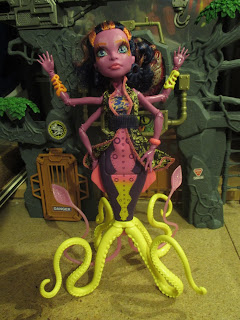 And that just leaves us with Kala Mer’ri, Lagoona’s old dance partner and later old nemesis. Kala was raised by an only father but exactly who she’s the daughter of has been scribbled out in her diary and is a ‘secret’ so I’m guessing it’s going to revealed in the CGI special (though I thought it had already been revealed/leaked to be the Kraken?). It seems that Kala began to bully/feud with Lagoona out of envy of Lagoona’s stable home life in contrast to her broken home, I like that they’ve made her sympathetic and given her a reason for her bullying rather than just ‘bitch’ but as someone from a broken home who’ve never bullied anyone: HEY! Kala’s a self-confessed control freak but did endear herself to me with the following joke in the ‘pet’s’ section of her bio: “Do Peri and Pearl count? Just kidding! I don't have time for pets.”

I’m a little conflicted about thinking that Kala is easily the best doll in this wave because I was VERY badly bullied at school and don’t want to have so many good things to say about a bully, especially someone who bullied the always lovely Lagoona Blue. But she is the best doll in this wave and I should think one of the best designed and constructed dolls in the line thus far. I suppose it makes sense that they would put the most effort into designing and realising her because she’s going to the next major antagonist in the series (though I don’t doubt she’ll reform by the end of the special) but all the same she’s great, so let’s just get to the heaps of praise: Her entire colours scheme is lovely, purple, blue and bright yellow go great together (yeah who’d’ve thought?); the complex design on her tail is very well painted on mine, I have no idea how they did that, it must have used a stencil somehow but how? Did a machine do it? how do you make a stencil with perfect unbroken rings in them?; I think she may be a 100% new tool, I don’t think she re-uses Wydowna or Luna’s segmented parts, she seems to have brand new ones; she is articulated to fuck – ball joints on her head, each shoulder, each elbow, each wrist and at the top of each tentacle plus that huge hinge at her…knees? Vag? Whatever that’s 19 points of articulation with only one not being a ball joint, that’s better than most collectors’ figures. And her head sculpt is gorgeous, is it still acceptable to use the term ‘ethnic features’? I hope so because Kala is definitely rocking some ethnic features, I initially thought she might be based on an Indian woman’s face which just shows that no matter how un-racist you think you are you can still be easily swayed by stereotypes born form pop culture, and by pop culture mean Ray Harryhausen films – her name sounds like Kali, she has four arms and she looks a bit foreign, must be Indian – I despair at myself sometimes. Having her in hand and having her diary and information online I think it’s safe to say if she’s based on any race it’s Aboriginal Australians, her face structure and hair match up nicely and she’s very Australian so I think that’s a good fit, regardless she is VERY facially attractive, her light pink markings can give her a kind of ‘resting ice queen’ face but it’s an optical allusion, her features put her somewhere between sexy and cute, is sexy-cute a thing? If it isn’t it is now. 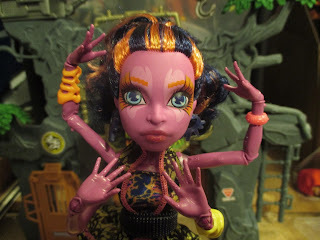 Again Kala has zero accessories outside of her diary, but all of these have so much new tooling and so many new accessories on their body (with only four Kala is the least accessorized of the group, which is a point, what the fuck is up with her belt? I’m going got assume it’s a well-researched and actually existing piece of fashion possibly tied to Australia and I’m ignorant but it looks like a Stickle Brick) so I don’t feel short changed really (though a brush each would have ben nice, especially with Posea’s sheer volume of barnet) and I feel pretty good about wrapping things up here. Conclusions then? These are some of, if not THE, most ambitious Monster High dolls so far and the dirty bastards have pretty much pulled it off, Posea’s coral whatever and the lack of glow-in-the-dark pieces per doll being the only two failures. Oh, Yeah, right - the dolls have glow-in-the-dark elements on them but they’re so miniscule (Kala has the most with her two tiny pink tentacles) I couldn’t be arsed to bring it up in each doll’s section. 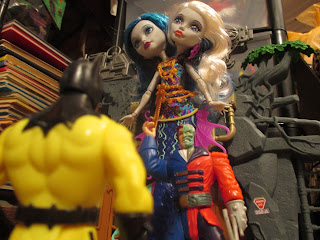 Yes that is a pirate-themed Two-Face and an aqua-themed Batman figure, and of course these things exist and I own them, in fact that Batman was my main Batman for years as a kid and I feel quite thrilled to be able to put a picture of him online – sad innit?
Posted by dwitefry at 07:55