My previous post may have clued you into me being a bit of a fan of the 1990s toyline Dragon Flyz from Galoob. Just in case you didn’t get the hint, I really fucking like Dragon Flyz. But information on the line beyond its first year of product is scarce, again I refer you to my previous post where I sorted out everything we already knew because I got sick of sites of all the misinformation flying ‘round online. To recap, we know the first year’s releases fine: 5 Figure and Launcher packs; 6 single carded figures without launchers; 3 Figure, Launcher and Gremwing packs; an Avon exclusive mail-away Golden Ray Z’Neth and the big ticket item Riptor - a huge dragon, but for the later sets of releases things become a little vague: we knew that new Figure and Launcher packs were released. as was a new big ticket item in the form of Vulcan (Doomfyre) - a three headed dragon only released in Europe, plus sub-lines F.I.S.T. Force, Battle Blazers and finally Blazin’ Battle Screamers but who or what was in each line remained a mystery, as did a figure seemingly of cartoon character Nocturna found on the blog She’s Fantastic – until now


See I finally got ‘round to opening my newly acquired Vulcan, I’ve been ill for a few weeks, and it came with a one of those leaflets in it, I have scanned it (all images can be clicked on to enlarge):

Firstly side one, which is all first year product and mostly irrelevant: 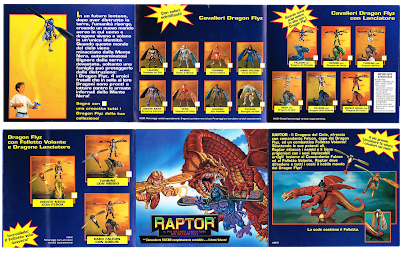 But side two, that's where the good stuff happens: 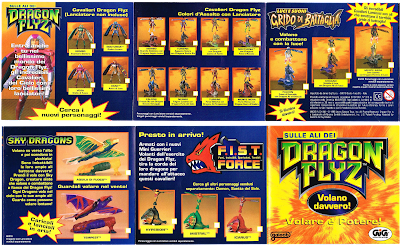 The first page shows off the new male version of Apex, or rather Vega, I’m not kidding, Vega was previously given to Apex, the girl Dragon Flyz, we have photographic proof! Maybe GIG has some kind of weird rule where there can only be one girl per wave. More importantly though it includes the previous unconfirmed second wave of single carded figures!: The text over Vega reads (roughly): “enter yourself in the beautiful world of Dragon Flyz, the incredible Knights of Heaven with their beautiful pitchers”. While the burst reads (roughly): “look for new characters !” but who gives a shit while the figures listed are:

Page 2 includes the complete line-up for the second wave of Figure and Launcher sets, a whopping 8 sets, including a set of four repaints from the first wave (notably lacking Apex for fear anyone might remember she used to be a she) and all the heroes are using the same dragon launcher sculpt now I guess and three of the single carded figures with a second paint job: 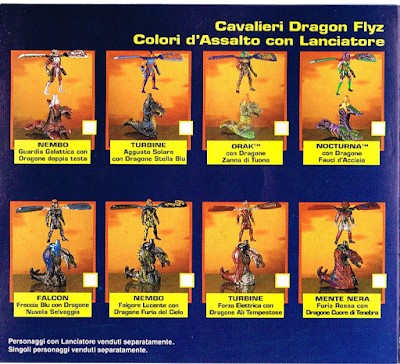 What’s especially important here is that this Figure and Launcher version of Nocturna is the She’s Fantastic Nocturna! We now know how she was released and that she was clearly intended to be the default look for the figure even though the single carded variant is closer to the cartoon. 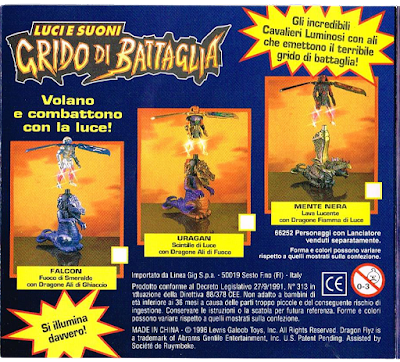 The large burst in the top corner reads (roughly): “The incredible Bright Knights with wings that emit the terrible battle cry” and the other text says (roughly) “fly and fight with light” and the other burst says “it really lights!”. The three figures are:

Page 4 introduces something I’ve never come across before I don’t think, the Sky Dragons: 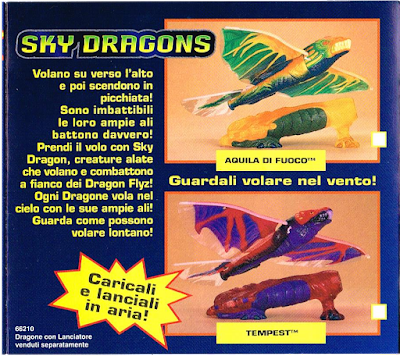 Odd things, they look like Dragon Flyz versions of Ricochet Racers, the text reads (roughly): “flying high up and then swoop down! They really beat their great wings! Take flight with Sky Dragons, winged creatures that fly and fight alongside the Dragon Flyz! Each dragon flying in the sky with its large wings! Look how far they can fly!” so yes they are Dragon Flyz Ricochet Racers. The big text between the two reads (roughly) “Watch them fly on the wind!” and the burst reads “Upload them and toss them in the air” which I think means ‘fire them or throw them in the air’.  The two beasts are:

And finally F.I.S.T Force, which only shows three figures but come with text to tell us to look for the other two figures sold separately (Damon and Saetta del Sole or Bluebeam and Jamkon): 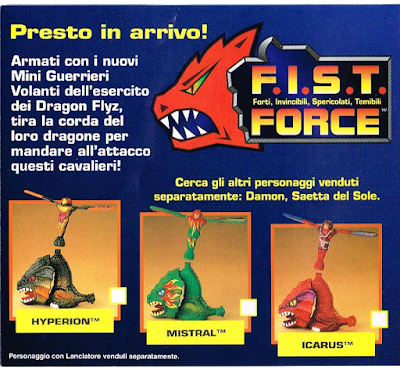 The title reads “coming soon!” and the text (roughly): “armed with new Mini Flying warriors of the Dragon Flyz army, pull the rope on their dragons to send this knights to attack!”

Shit, that's a lot of information.
Posted by dwitefry at 10:43